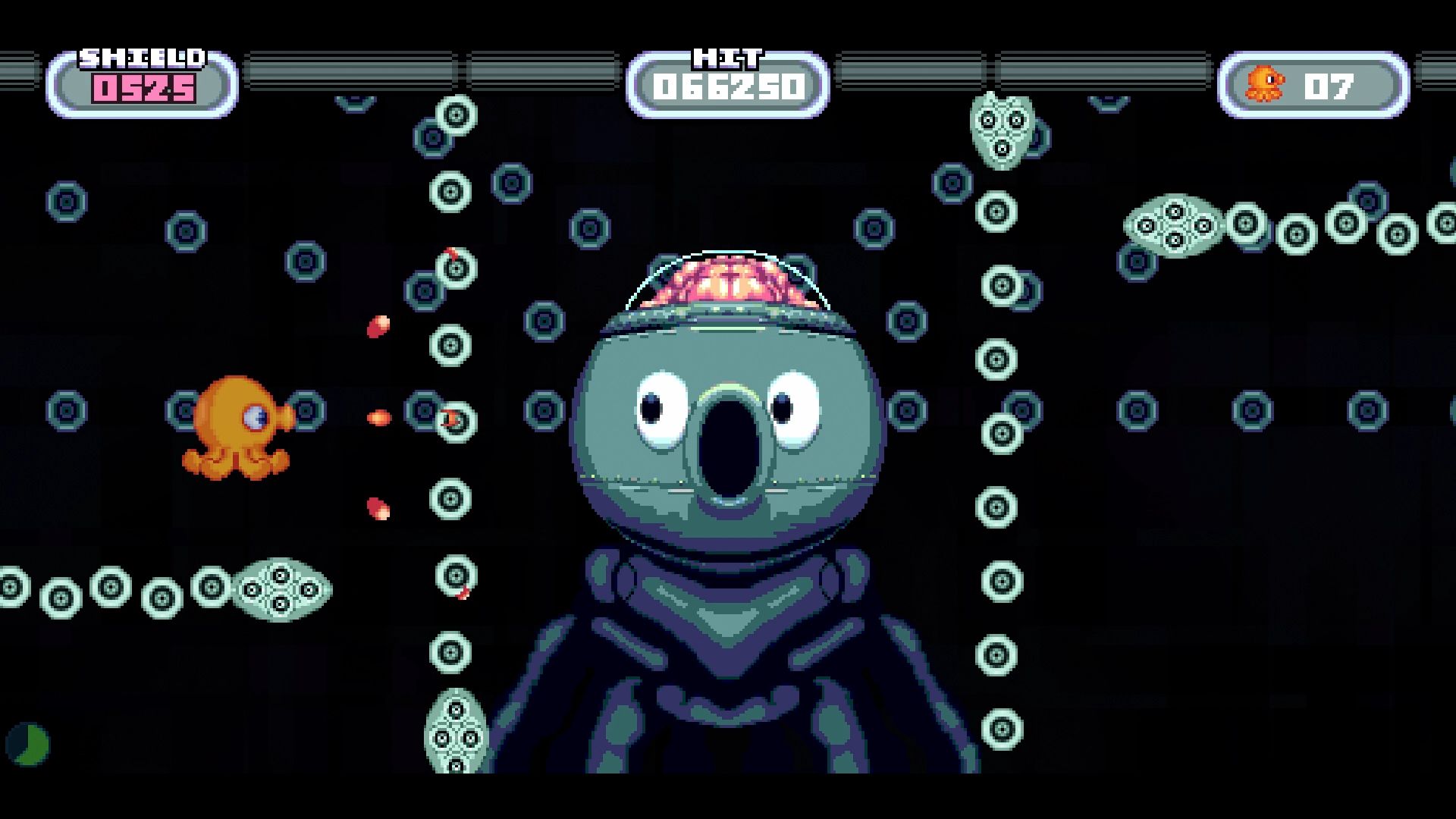 Side-scrolling shooters have been the mainstay of arcade and console gaming since the 1980s. Players were mesmerised by the colourful landscapes and the pace at which the action took place. I grew up missing the early days of the genre and had to catch up on the hype that was created by Gradius. I remember playing in awe of the continually changing backgrounds, and the ability to customise your ship with power-ups. With such a fine pedigree, it always makes me feel sad that the gaming community has moved on from what was a solid platform to begin your playing “career”. With fewer and fewer titles being added to the available list on a modern console, I was pleasantly surprised when I heard about Octonaut from Joseph Calabro, and Eastasiasoft Limited. Octonaut asks you to control a colourful cartoon octopus, where all the gaming principles that were found in the early side scrolling shooters are present. Players of old are in for a trip down memory lane, whereas younger gamers have a 16-bit adventure to look forward to.

8 levels of shooting and dodging await you in this alien destroying adventure. You are Earth’s last hope, and I’m sure no one expected 8 tentacles to be the savior of our world. Each of the stages that you visit has an array of enemies to smite. They will fly at you from all different angles and each work off their own movement pattern. Some fire; bombs, missiles, and bullets. Others wait until they pass you, and then shoot you in the back. Kamikaze aliens crash into you and sacrifice themselves for the greater good of their army. You must work out the best strategy to take out each of your opponents. You are given a shield with 1000 health points, and 3 lives. If you hit 0 on your shield and succumb to another blow, then it’s life over and begins again.

You might be thinking, “That can’t be that difficult, learn about each of your opponent’s attacks, then mow them down!” You wouldn’t be wrong, but each stage adds new aliens that work with the others to create maximum chaos and damage. Like with all great arcade games, it’s all about the score that you achieve. Finishing a level is all well and good, but, you want the high score. This can be obtained by killing multiple enemies to get a multiplier and collecting diamonds that are randomly dropped. Each of these diamonds varies in colour and value, and this can be altered with a simple hit of a bullet. Not only do you get gifted with treasure, but you also have the chance to collect cakes to regain health and Gashapon capsules that give you the opportunity to select a power-up. These are a game-changer, and I certainly recommend getting to grips with them early in a playthrough. You will be able to throw bowling balls on an arc, spray fire, release boomerangs, and much more. 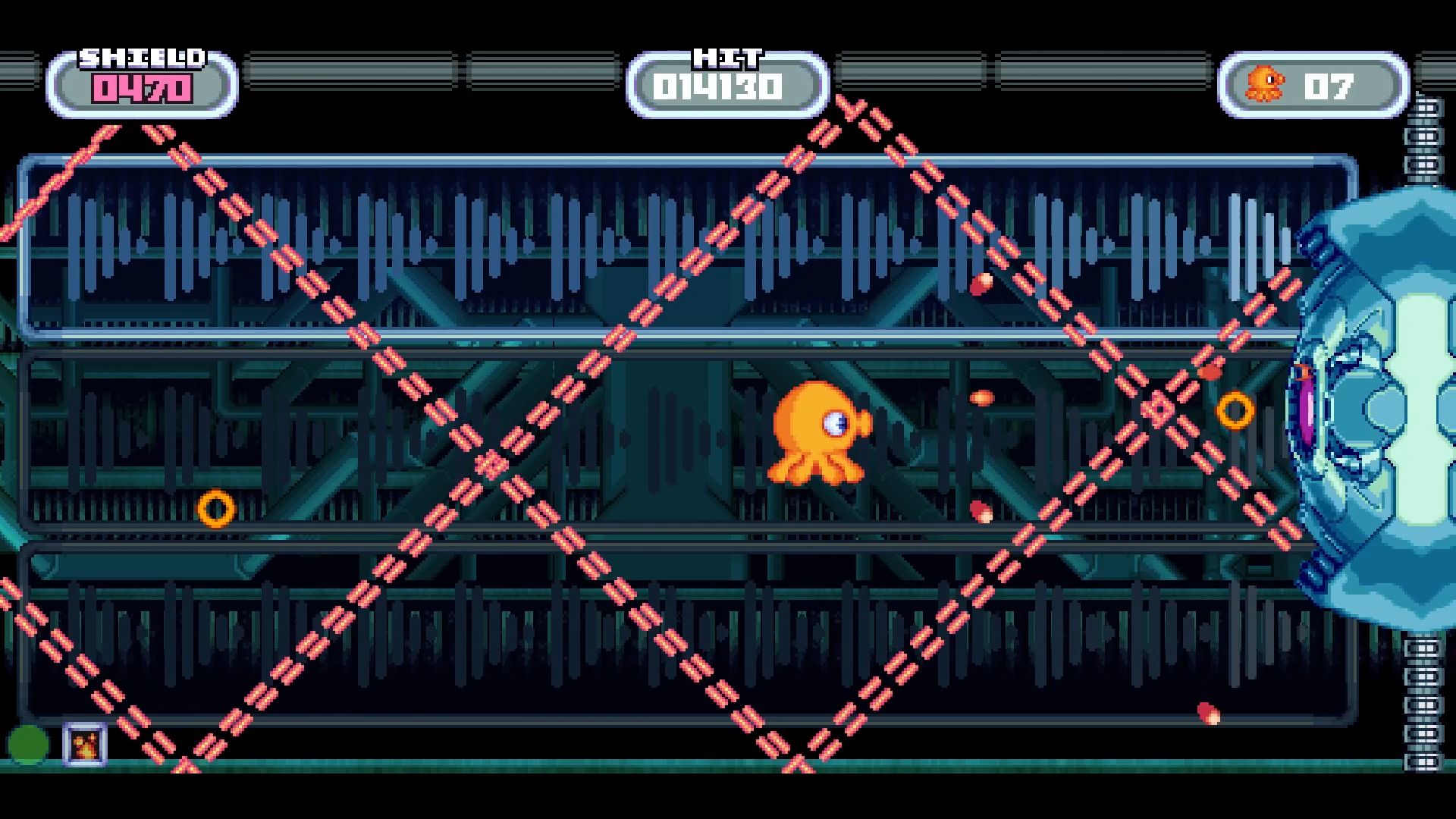 What is a side-scrolling shooting game, if it doesn’t have a crazy end of level bosses to take down? Luckily the developers have given you one big boss for each of the worlds that you visit. Like with the other aliens you encounter, they have their own movement pattern, and an array of weapons to decimate you with. If you happen to lose a life to a boss, which is likely, you’ll be glad to know that you don’t have to take on the whole stage again. You simply spawn at the monsters’ lair and attempt to learn from your mistakes. The main mode that you will experience has one serious drawback, and that’s the fact that you have to leave enough time to complete it in one sitting. If you happen to turn your console off, or need to stop playing for any reason, then you will lose all your progress, and you will have to start again. This restriction does give Octonaut that arcade feel if you walked away from a game, you wouldn’t expect to pick up where you left off. However, inputting that system into a console title really takes away from the casual gaming experience. In my opinion, a save option should have been implemented.

This is a colourful and glorious nod to all things 16 bit, and wouldn’t look out of place on the Sega Mega Drive, or SNES. The smooth scrolling screen, and lack of slow down even when the action gets hectic, make it an absolute pleasure to play. The vivid colours, and cartoon-style are a treat to the eye and will appeal to gamers of all ages. The genre is complemented perfectly with the retro graphics. Each of the aliens is easy to identify, which makes planning your next move much easier. All the worlds have their own distinct style and look, this really kept things interesting, and reduced any chance of the gameplay feeling repetitive. For me, this was a clear nod to Gradius and showed that the developers were influenced by the early genre titles, as well as all things 90’s.

Whenever I’ve played an arcade game, I expect the music to be very loud, and have a high tempo, especially for a side-scrolling shooter. Luckily this is exactly what you get in Octonaut. The music accompanies you throughout every level, and it drives you on to succeed. It may not be to everyone’s taste, I’m certainly not a fan of listening to anything that’s synthesized and as brash as the soundtrack in this game, but I don’t have to like it, I just have to appreciate that it works perfectly with the theme. I found that each run of the game was short enough that it didn’t bother me. I didn’t really pay it too much attention, as I was focused on dodging bullets, and attacking anything that floated towards me. The sound effects of your weapon firing and the aliens being destroyed are as you’d expect. It uses tried and tested audio that matches the action perfectly while maintaining the retro feel. 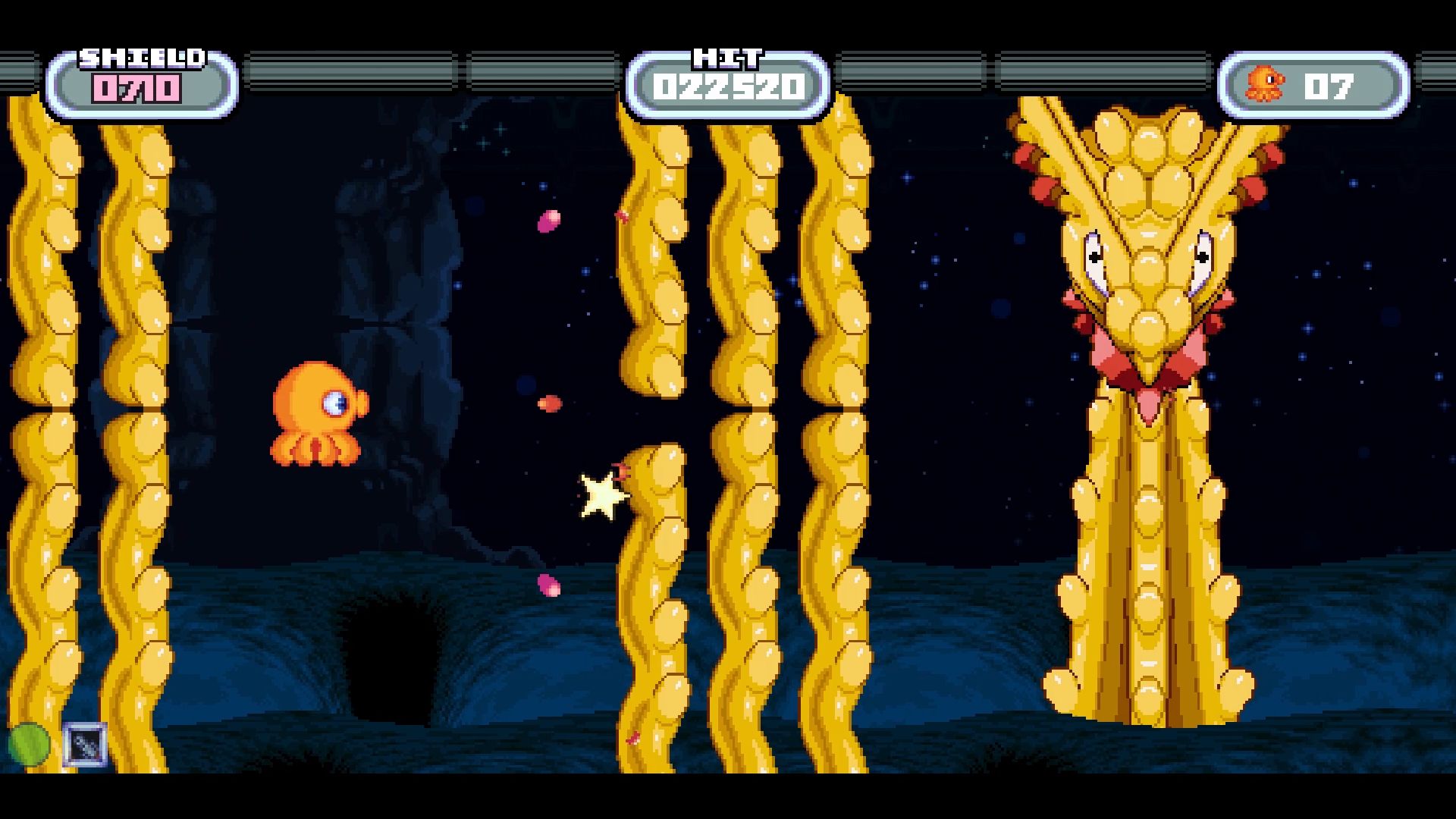 Arcade games are renowned for a simple button layout, but with the requirement of having extremely agile and dexterous fingers. Now I have to admit my playing heydays are behind me, I’m just glad to beat a game, and don’t expect to exceed at anything. It was quite pleased that the controls make you look like you are a pro gamer. Moving around was simply achieved with the left analogue stick, and the dodging and attack buttons were placed in such a way that you could fly through a level without really worrying. The button input doesn’t lag which is great, as at times the action is so fast, that you’d easily lose health if there were any delays. The only thing that could make the controls on this game any better, is if you had your own arcade setup, and mapped the buttons to make it truly feel authentic.

The great thing about any arcade-style game is the ability to beat your own score. This will constantly drive you to try to play a stage differently, trying to aim for perfection. If you mix this with a number of game modes, then you find yourself with a title that has pretty good replay value. I found that the main story is relatively short, but still feel that it represents great value for money. A reasonably easy achievement list awaits you if you take this title on, though it’s not possible to complete it in one playthrough, so completionists will have to attempt several runs in order to finish it off.

It’s a dangerous thing trying to find a game that replicates titles from your youth. 9 times out of 10 you will feel let down, and your rose-tinted glasses won’t allow you to enjoy the game in front of you for what it is. Octonaut does a very good job of maintaining that retro gameplay but in a modern and colourful setting. The fast-paced action, and variety in enemies keeps you on your toes throughout. I really did enjoy my time in this crazy alien filled adventure, and would certainly recommend it. Why not take this octopus for a spin, and see if you can save the world one tentacle at a time.

The world is under attack from aliens, who do you call upon? An octopus of course. It’s time to save the world one tentacle at a time.