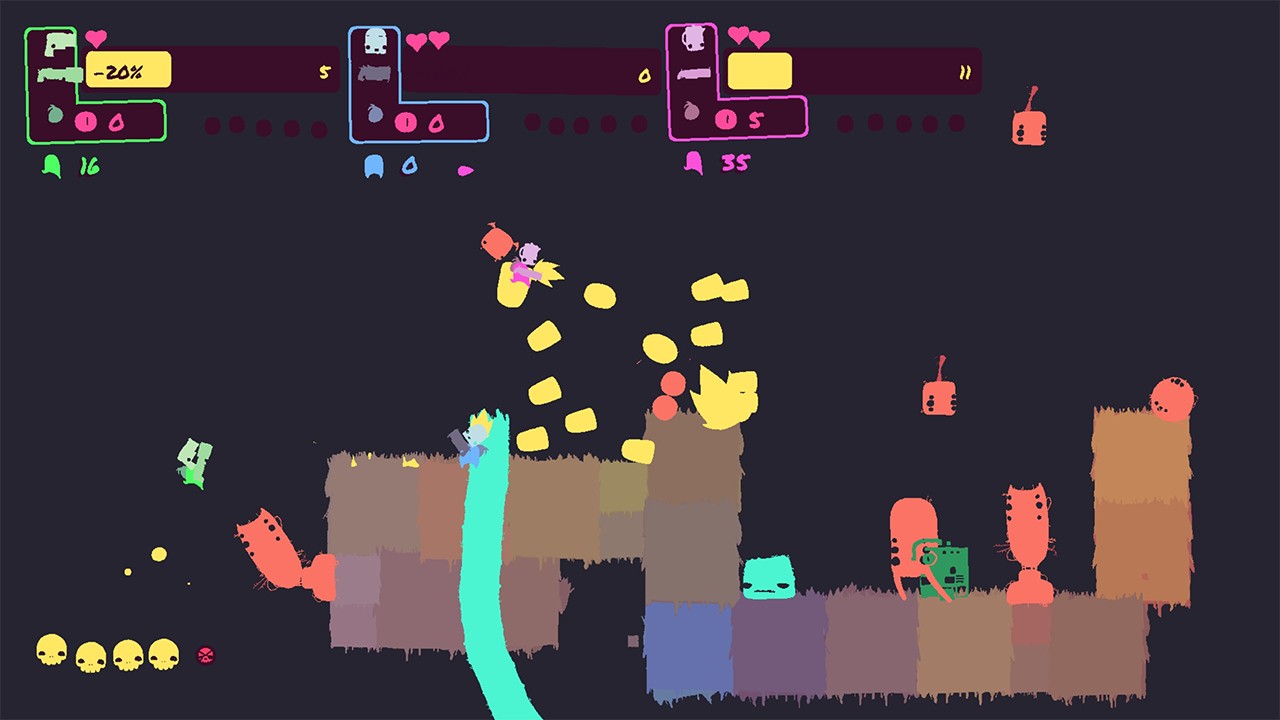 When I don’t like a game and a lot of other people like a game, I feel like there’s something wrong with me. Especially if I like other games by the same developer, or other games in the same genre. It’s like when my friends got super into Tribes when I was in high school, and I decided to give it a shot. Like, I played it a bit because it was a multiplayer experience and I loved LAN parties, but there was just something in it that never clicked. I liked Doom, I liked Diablo, I even liked Warcraft II, but Tribes just never clicked. That’s how I’m feeling with Gonner 2, which is published by Raw Fury (who I’ve had nothing but positive things to say about) and Art in Heart, a development team that I’m wholly unfamiliar with. On paper, everything looks great, but then it just…it doesn’t land for me.

Let’s lay the groundwork. This is the sequel to a highly successful indie roguelite platformer, and it looks like the wiggly art styling of Baba is You (no relation) paired with an intense round of neon colouring and appropriate darkness. You play a little dude named Ikk, who apparently is dead and totally okay with that. Ikk wants to help out Death, because there’s something in Death’s lair that Death would prefer not be there, and Ikk is happy to go find it. Ikk comes with a few accessories: a different gun depending on what you find, a backpack to hold a whole lot of things, and a head. That might not seem like something I have to mention “having,” but Ikk can get many heads, so why not mention it? Ikk might die when he’s out there helping Death: Ikk will probably die several times. But that’s okay. Ikk is helpful, and Death is patient and somewhat kind.

So we got this game, Gonner 2, where you’re meant to explore several different types of worlds in order to get to some bosses and gun them down. As you explore, there are enemies, and the enemies want to hurt you. You can jump on most enemies to do Mario-style damage, and you also have a gun, further crafting the elementary school dreams of “Mario but with a Gun” games. You get ammo from enemies and also from random flowers around the levels, and dead enemies drop coins that are used to stay alive and also to buy power-ups at the shop that appears in each world. Killing more enemies uninterrupted builds a combo, which does help keep points high, and ultimately plays out well for you by the end. So far, so good, pretty straight forward. 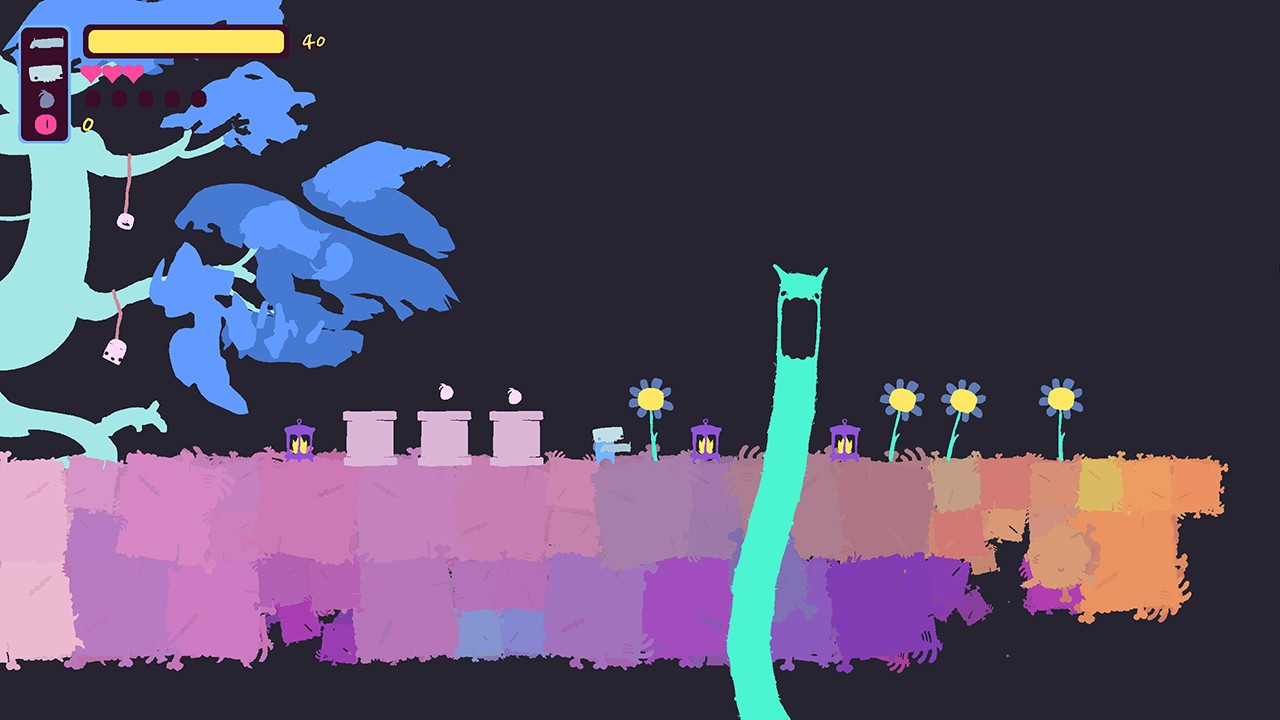 If you get hit in Gonner 2, you drop everything you’re holding and revert back to your original form, a little blue blobby dude. Without the backpack, you can’t pick up coins. Without the gun, you can’t shoot enemies (naturally). Without your head, your next hit will kill you. There’s almost no invulnerability after you take the hit, so don’t count on a great grace period to recover after you get smacked: get hustling and either grab your head ASAP or retreat and hope for the enemies to dissipate. If you get killed, you have a chance to survive IF you have enough coins and can force feed the death’s head that appears before enemies overpower it. Respawn means going back to the beginning of the level and starting from there, and there’s also the possibility that your weapon might not be waiting for you anymore, or maybe not your head. Thankfully, there’s always the chance to find more heads, including a chance to get better heads if you’re skilful enough to make it past at least once boss.

I will say that: this game progresses in a very smooth and cool fashion. Gonner 2 gives you the choice between which of the levels you’ll be taking on when you spawn, and will always give you two choices as long as two exist. If you’re not a fan of certain types of levels, you can access a different world for a fresh run to see how you do. For example, I personally think that the ground levels are infinitely easier to deal with than, say, the underwater level, which I hate with a burning passion. With some procedural generation, there’s always a good chance to find something different or interesting upon entering a world. Sometimes I wouldn’t get a single treasure chest (I don’t know what else to call the heads that are full of coins and specialty power-ups), and others I’d get like two or even three in a single world. You find some great stuff, and the game does encourage you to kill as many enemies as possible, as the coins you get are both your lifeline when something goes wrong and also the only chance you have to modify/heal your character before facing the ridiculous looking but genuinely difficult bosses. Unlocking more things makes the game more fun to play and easier: like a head that doesn’t fall off when damaged, or a laser rifle that has terrific range and damage. If you’re able to basically hang on for a single world, Gonner 2 becomes your oyster.

From a purely aesthetic point of view, I also enjoyed Gonner 2. The graphics are a bit childish and surrealist, but that’s purposely done to add to some of the amorphous qualities of the story and the ideas. The way the level slowly unfolded itself, like it was appearing and disappearing through object permanence, added to the insanity of it all, and it was brilliant. Traversing the stages through pipes that swallowed you seemed just natural, like “yea, that makes sense.” The monsters being somewhat shapeless except for specific instances then made the more detailed beings twice as horrifying. After a whole level of basically just a single floating eye that shoots blobs of damage, it was a shock to encounter a multi-screened horror made of multiple eyes and constant bullets. It was such a sharp uptick in consequence and difficulty that I died almost instantly, but it was a pleasure to find and see. Additionally, the whole game is saturated with orange, a personal favourite colour of mine, and the soundtrack feels sufficiently dreamy without being dreamlike, if that makes sense. It doesn’t feel like a dream or a nightmare, but just one of those non-real realities where you know something’s off and you’re gonna wake up soon. No, the visuals and audios of Gonner 2 are also not a problem. 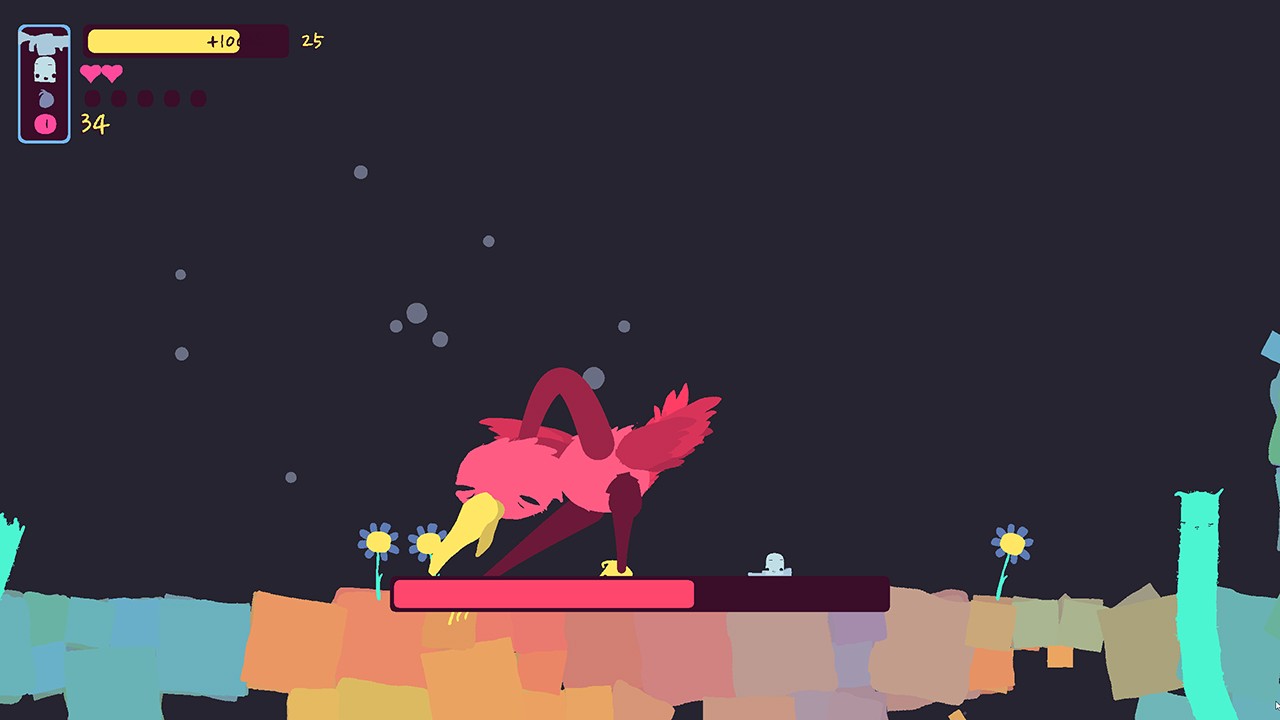 There was just never that wow moment that made the game click for me, and that feels really sad. Gonner 2 clearly has a lot of love put into it, and the sequel status means that they took an existing idea that was successful and said “right, how can we make this even better?” Yet everything just felt…very dry to me. I spawn. I get a gun. I go blow up some enemies. I meet a boss, I live or die, I continue onward. It was such a pain in the ass to get through the water level, and then the massive octopus boss was truly a sight to behold…right up until it started spitting sharks at me and, shock, I died. Like, there’s probably a TON of differences between this and the original, and the existence of co-op is probably a massive pull for some people. However, in a single player setting, I had a very humdrum time. It had moments of frantic shooting paired with walking around, a little bit of exploration to see where the walls might lead to, and then back to the shooting.

Perhaps I’m being too harsh, but that’s sort of where I’m at with Gonner 2. This is a great stylistic game, an excellent blend of platform exploration with roguelite gunplay, and it’s certainly a sight to behold. I just didn’t get that hook that so many games deliver, the one that made me WANT to respawn and keep playing. When I died, it was with a shrug and the feeling of “alright, I guess I’ll go ahead.” A game shouldn’t feel like practicing scales on the piano, and that’s where I’m at. Good luck to everyone else, and kudos to the team for delivering a sequel that’ll probably land well with fans. But newcomers may need to rewind, see if Gonner 1 is a fit, and then go from there before diving into the sequel.

This is one of those times where I’m pretty sure everyone will say my mistake was not playing this co-op, as I was pretty tepid on the single player time.