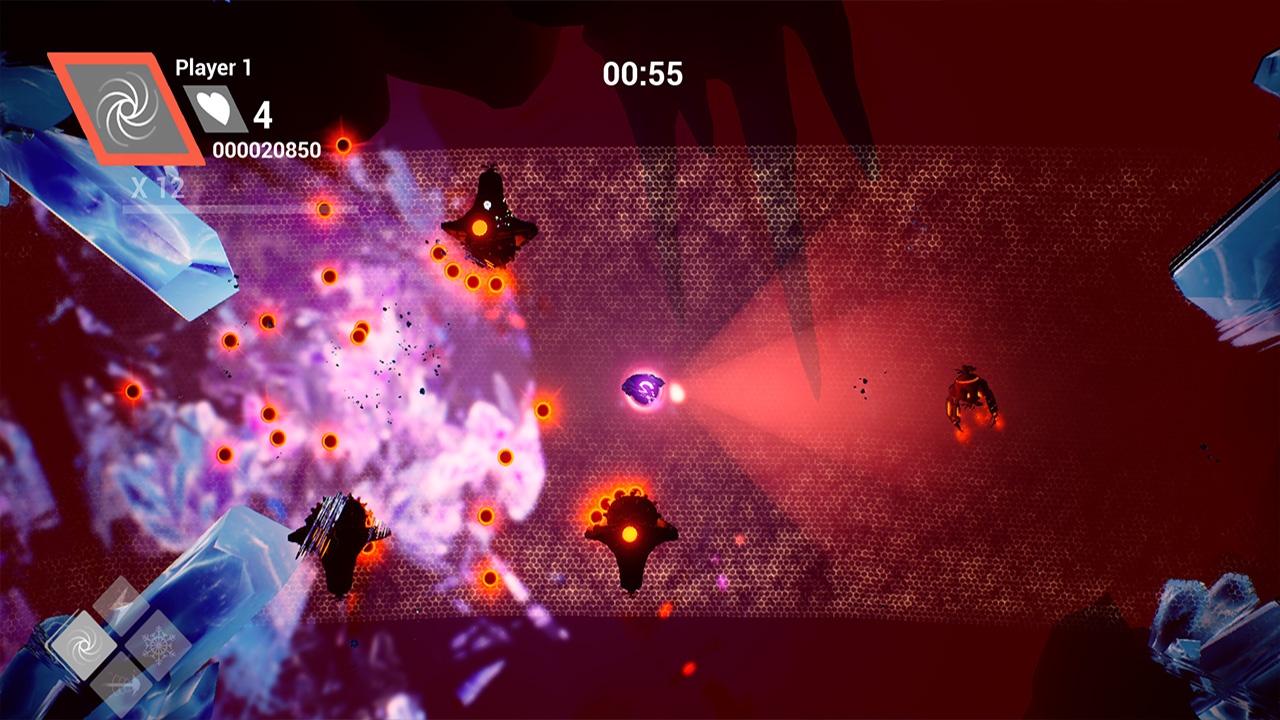 Shoot ‘em ups, are some of the oldest, and most established video games in history. And have been at the forefront of the industry since 1978, and while with time, they’ve endured some ups and downs, they’ve persisted throughout, and to this day, they still make up a large portion of modern video-games. And titles such as the widely popular Sine Mora, Ikaruga, and Metal Slug X, have allowed the genre to escape the shadows of obscurity. And while many have enjoyed widespread success, others, such as the recently released Boiling Bolt, were reduced to playing the second fiddle to larger, more prominent titles.

Boling Bolt, just like Resogun, is a left to right shoot ‘em up, where player controls a singular star-ship which is slowly flying along the pre-determined tubular course. However, unlike other titles of this specific genre, Boiling Bolt isn’t situated within a singular straight line, as all in-game courses bend from left to right, and vice versa, and switch up the scenery on the go. And while ever-changing courses are a welcome addition for sure, they ultimately do more bad than good, as they slow down Boiling Bolt’s pace to a snail’s crawl, which ultimately takes a lot away from the title.

The biggest selling points of all modern shoot ‘em ups, are the blinding pace, and the barrage of special effects, which in conjunction with one another, create a spectacle that is borderline impossible to recreate within any other genre. However, where Velocity 2X, and Nex Machina, manage to combine the two with impeccable synchronicity, the same cannot be said about Boiling Bolt, as the title at hand feels like it is taking place under water, as all on-screen actions look and feel sluggish, and combat which revolves around bullet hell mechanics, at times feels unsuitable due to its lacklustre, and borderline unresponsive controls. 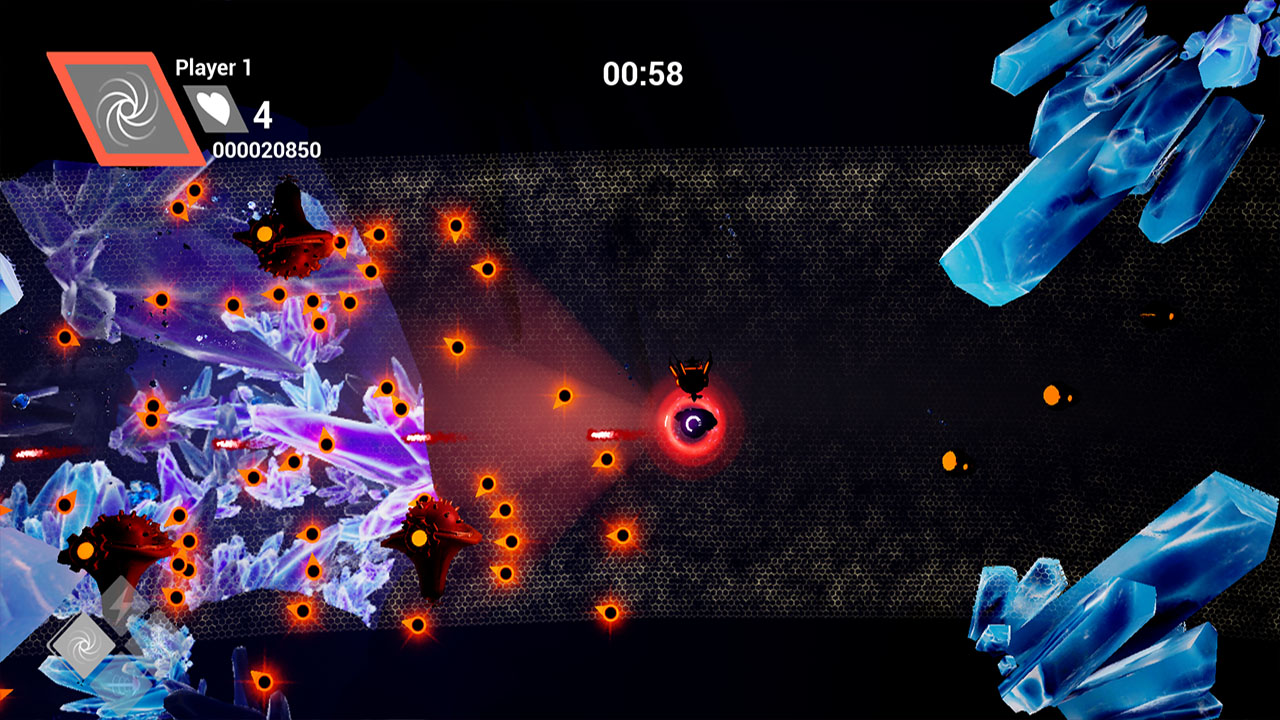 The on-screen ship, which the player has the complete control over, feels like a submarine submerged in oil. As it moves at a snail’s pace, and is seemingly drifting beyond one’s touch, just like a marine vessel on water. And this certainly doesn’t help within latter stages of the title, where the game at hand, expects the player to fight off hostiles at two fronts, while dodging hundreds of lethal bullets. And while the in-game combat is manageable at the beginning, it becomes infuriatingly hard with each and every following stage, as the general feel of the in-game controls, is simply unsuitable for a shoot ‘em up, especially one which is as hostile as Boiling Bolt.

The first impression of Boiling Bolt will surely be positive to most, as at the beginning the title at hand comes across as a competent, and reasonable title. However, with time one’s positive opinion of it begins to dissipate, due to the title’s core gameplay, which is baffling at its best, and infuriating at its worst. And while most will favour boiling bolt for its quote-on-quote difficulty, it has to be said that such is much more artificial than one is led to believe. As player’s survival ultimately is down to his/her luck, more so than his/her general ability.

When it comes to the pure essence of Boiling Bolt, it has to be said that it does very little to entice, and encourage the players to push forwards, as for the most part it feels cheap, and unfair. However, Boiling Bolt, unlike the vast majority of the titles of the shoot ‘em up genre, features couch co-op, which at least to me, is the title’s brightest, and biggest selling point. As it provides potential customers with something that very few titles can. 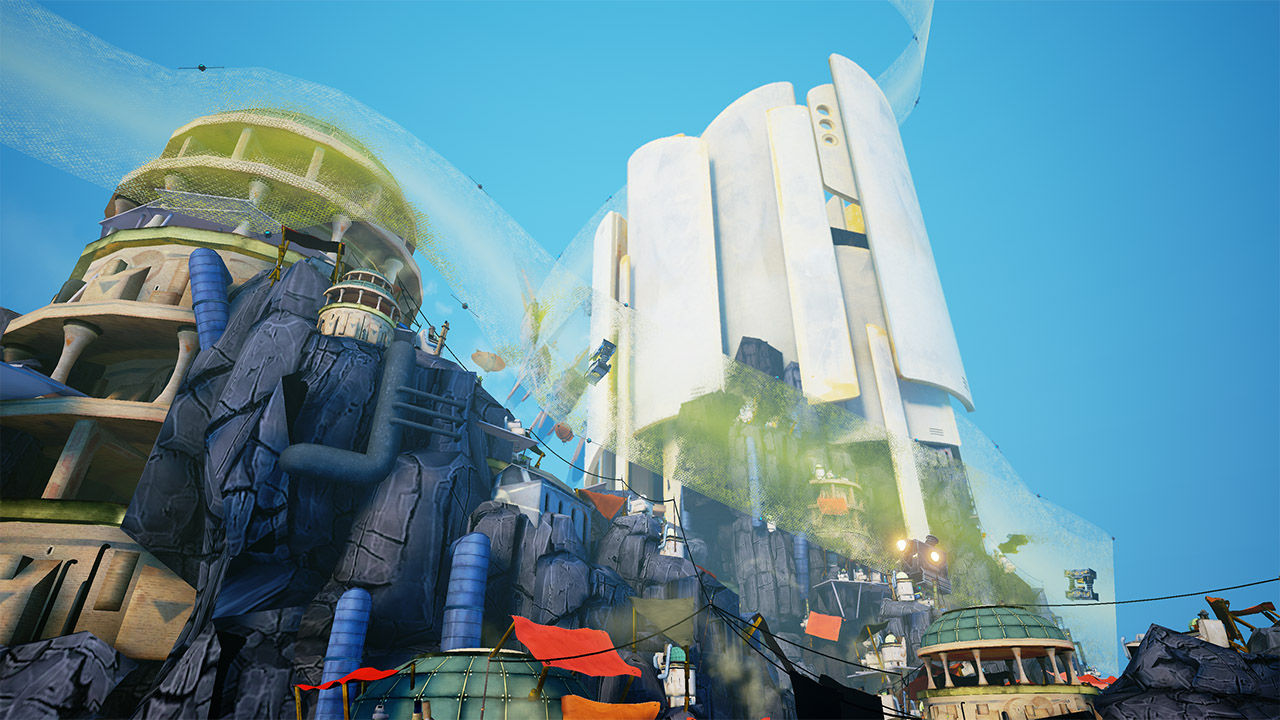 Boiling Bolt, at times feels like it has been built with co-op in mind from the very beginning, and that single player has only been added to allow certain players to play on their own, if they have nobody else to play with. And this is visible throughout, especially during the static waves where players are locked in within a cage, and are forced to fight off waves of enemies, which surprise, surprise, come from both sides, as if they were destined for two players and not just one.

In addition to its co-op centric level design, Boiling Bolt also possesses a plethora of features, which have been built with co-op in mid, such as co-op abilities which activate whenever the title is played by two persons at the same time. In-fact, one of the very first abilities, which unlocks right after the prologue, is all about the interaction between two players, as it creates a string of lightning whenever both players are working in unison. And this only further emphasis the fact that Boling Bolt is a co-op title through and through, and not a single player shoot ‘em up, which the publisher behind the title is promoting.

When approached from a singular, shoot ‘em up, perspective, Boiling Bolt is nothing more than a slow, and soul-destroying hell on earth. Which is nothing more than a bad copy of PixelJunk Shooter, set within a world which is simply unsuitable for the mechanics which have been implemented within the title at hand. However, if one approaches Boling Bolt as a co-op titles, and co-op title alone, he/she come to a conclusion that it is a highly accomplished title, as it does everything that a co-op title should. It encourages co-operation through level design and core gameplay, and rewards it with additional points and abilities. But when the push comes to shove, it has to be underlined that co-op is only a portion of the complete experience, which otherwise is downright average.