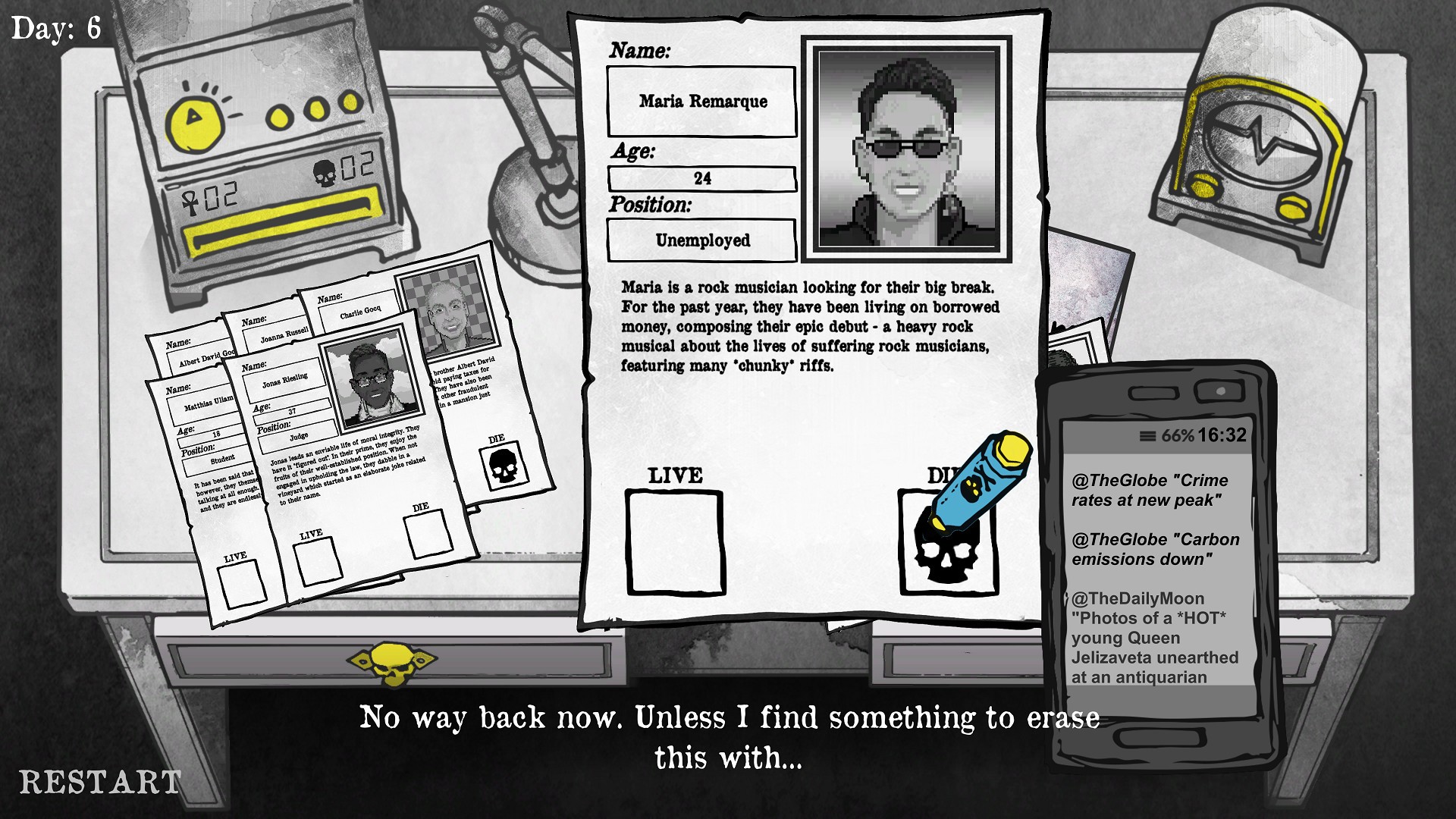 Death and Taxes is an exceptional narrative-driven adventure game where you play as the Grim Reaper, working for Fate, the Keeper of the World Order. The Grim Reaper’s daily job consists of sitting at his desk, skimming through profile pages detailing the lives of all sorts of people, and deciding who lives and who dies in order to meet your daily quota. However, following the rules is just an option, you can approach each situation however you see fit.

The game takes place across 28 days, which should take you somewhere around 3 hours or so to complete. However, given the consequences of your choices, of who you decide that must die and whatnot, there’s quite a bit of room for replayability, and I honestly think that anyone that buys this game should at least play through the game twice, as once you complete the game you’ll unlock New Game+ which has some interesting ties to your first playthrough. Nonetheless, if you find yourself truly enjoying the game as I did, then I wouldn’t be surprised if, just like myself, you’d also play through the game even more times than that, as you experiment and try to bend the rules a little bit. It feels like there’s always an alternate route to take.

Now, when I say that your choices have consequences, I don’t mean that every choice has an immediate and obvious effect which you can instantly see. Every single choice you make, as in deciding if someone lives or dies and if you follow the rules given to you every day, changes how the game unfolds and are reflected on the world and the state of society. For instance, if you kill too many scientists you might find yourself in a world where global warming is quickly becoming a huge problem, or some health hazard might come up. 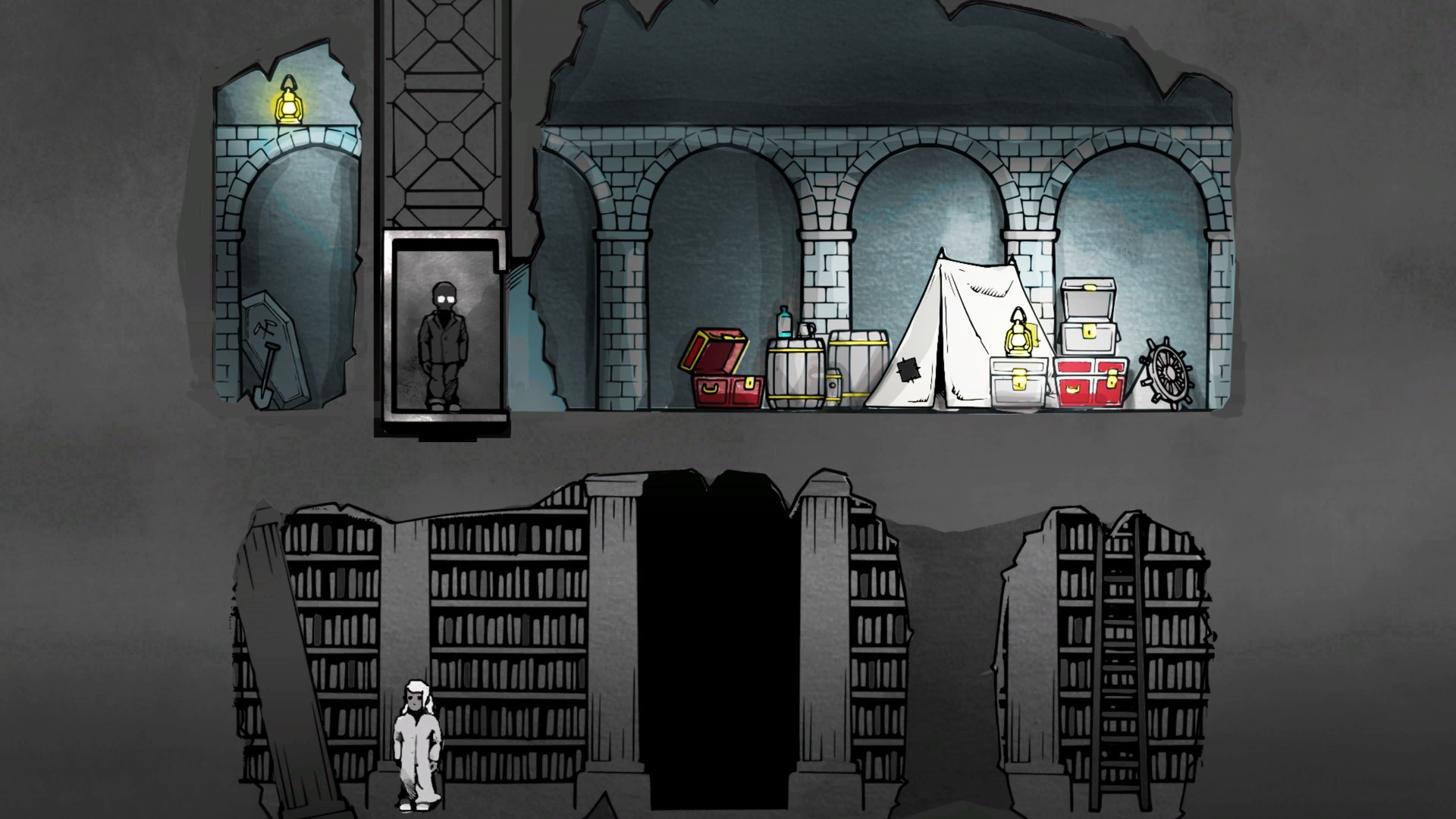 However, the main way through which you can actually see how your choices affected the world is by checking the news on your smartphone the next day. Sure, this might make it sound like your decisions have a very small impact, but they don’t, as it quickly becomes apparent when you start to notice patterns in the people that you get to judge each day as time goes on and as you get a sense of what is going on in the world, not only through your phone but also by chatting with your boss. There are also a few other ways to see the impact of your choices, but I’ll leave those up for the reader to discover themselves.

With each passing day, you’ll be diligently for your work, with the amount depending on your performance. Who would’ve guessed that the Grim Reaper himself would actually work so he could go shopping? Well, probably not many people, but that is exactly what happens here. With your paycheck, you can visit the Mortimer’s Plunder Emporium and not only purchase decorations and cosmetic items which change the way you look, but you can also acquire widgets which serve some function within the gameplay loop, whether that be a calendar to keep track of the days or a lamp that lets you search people’s profiles for some hidden details that you might have not previously been aware of. Furthermore, Mortimer will always tell you one of his grand tales about how he came upon the items that you buy, which are often rather amusing.

Now, don’t get me wrong, there isn’t anything special about Death and Taxes gameplay, all you do is tick boxes in a paper form to decide who lives and who dies, but without it, the game’s narrative and writing wouldn’t be able to shine. The game’s writing is nothing short of amazing, it’s extremely compelling and engaging, and even though the game tackles real-world issues, the characters and the tone of the dialogue (which is actually surprisingly well voice-acted) still manage to retain a certain level ridiculousness and silliness which only embolden the game’s charm even further. 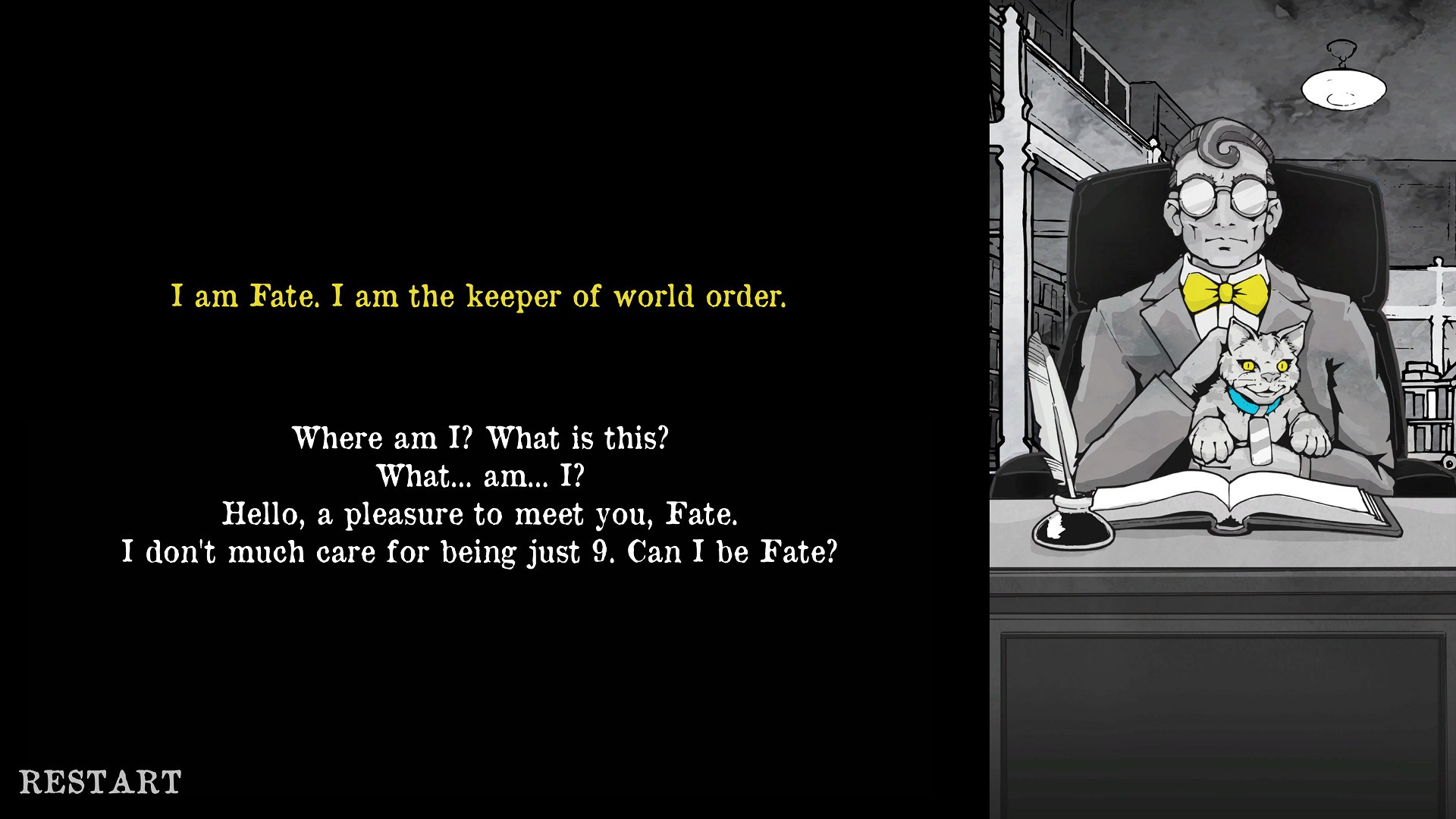 With that said, I have no qualms in regards to the game’s writing quality, but there’s one thing that really bothers me about it, and that’s the use of the pronoun “they” to refer to every single person. I realize that this is grammatically correct, but it just creates a lot of awkward reading and interpretation moments. Almost every single time that the game uses “they” I have to go back and read the whole thing again just to make sure I understand what the text is trying to convey properly. In any case, the game does provide an explanation for this, and while I do have to agree that it makes sense, in my mind the trouble it might present to readers is not worth it. Maybe this isn’t that much of an issue for native English speakers, so just keep that in mind.

Much like games such as Papers, Please, Not For Broadcast, and Beholder, Death and Taxes also has the power to actually make players heavily ponder their choices, even if some of them might not seem like they’ll have an everlasting effect on their playthrough. I always find it quite fascinating when games achieve to do something like that, when they manage to touch the player’s conscience through the narrative and gameplay.

There is no doubt that Death and Taxes is one of a kind, and that making these kinds of games tends to pose a huge risk since it doesn’t really fit in any of the most popular genres, and so a lot of people might look at it and don’t know what to expect. With that said, I never thought that playing as the Grim Reaper in a daily office job could be this fun and engaging. The choice-driven dialogue is undoubtedly the star of the show, but this is honestly a game that’s hard to sell people on, it’s one of those cases where you have to play it yourself and experience the mysterious plot unfold around you in order to truly appreciate it for what it is. Given how exceptional Death and Taxes is, I’d be a fool to not recommend it to everyone and anyone that doesn’t mind games missing an action element but that instead focus on storytelling, worldbuilding and narrative.

Death and Taxes is an exceptional narrative-driven adventure game where you play as the Grim Reaper in a daily office job.