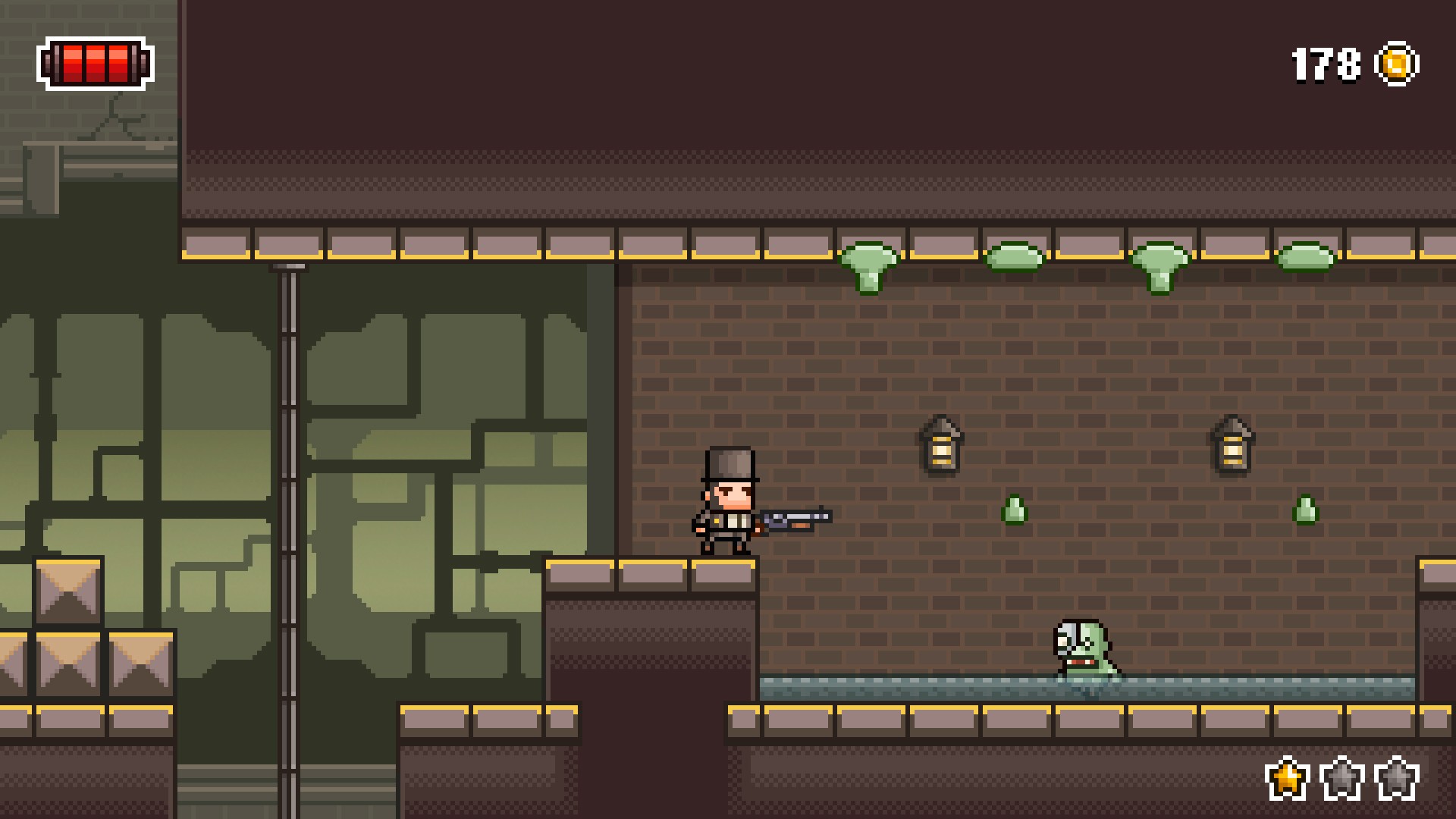 Adventures are a long and arduous task, people get hurt, monsters get killed, and you must make sure that you have the right hero to resolve your problem. So why not reduce the headache, and select from as many heroes as possible? Random Heroes: Gold Edition allows you to do just that. A side-scrolling 2D platform title that lets you choose from just one hero to start with. But, as you complete more levels the choices expand, and you can pick the one that matches your game style, as well as the one you like the look of. Developed by Woblyware, and published by Ratalaika Games S.L you will move your hero from level to level collecting coins, eliminating enemies, and attempting to survive.

All the action spans across 9 different regions and consists of 108 levels in total. You must move from point A to point B, avoiding the traps, and attempting to collect all the coins and the 3 stars that are on offer. Each star is reserved for achieving a certain standard; The 1st is for avoiding damage, the 2nd is for killing all opponents, and finally, the 3rd is for collecting all the set loot. Stars are used to unlock each of the heroes, and ultimately work as bragging rights to show how great you are at the game. The cash can be swapped in at the shop for a number of different weapons, each has a set characteristic, and many of them are locked until you reach a certain level. This somewhat prevents the game from becoming unbalanced, as the latter tech is unbelievably powerful.

Each of the characters that you unlock has a unique style to them; A ninja, a clown, a cyborg, and so on, and so forth, you get the idea. The choice is vast, but the difference between each is quite minimal, so I selected the one that had the best positive rating, and looked the coolest. Did the character choices impact the game? No, not really. But it was fun being able to select my protagonist for my adventure. I would have liked to see some custom options added, and some form of special power for each one that I chose. This would have made me make a considered decision, except I just picked the one with the funky outfit. 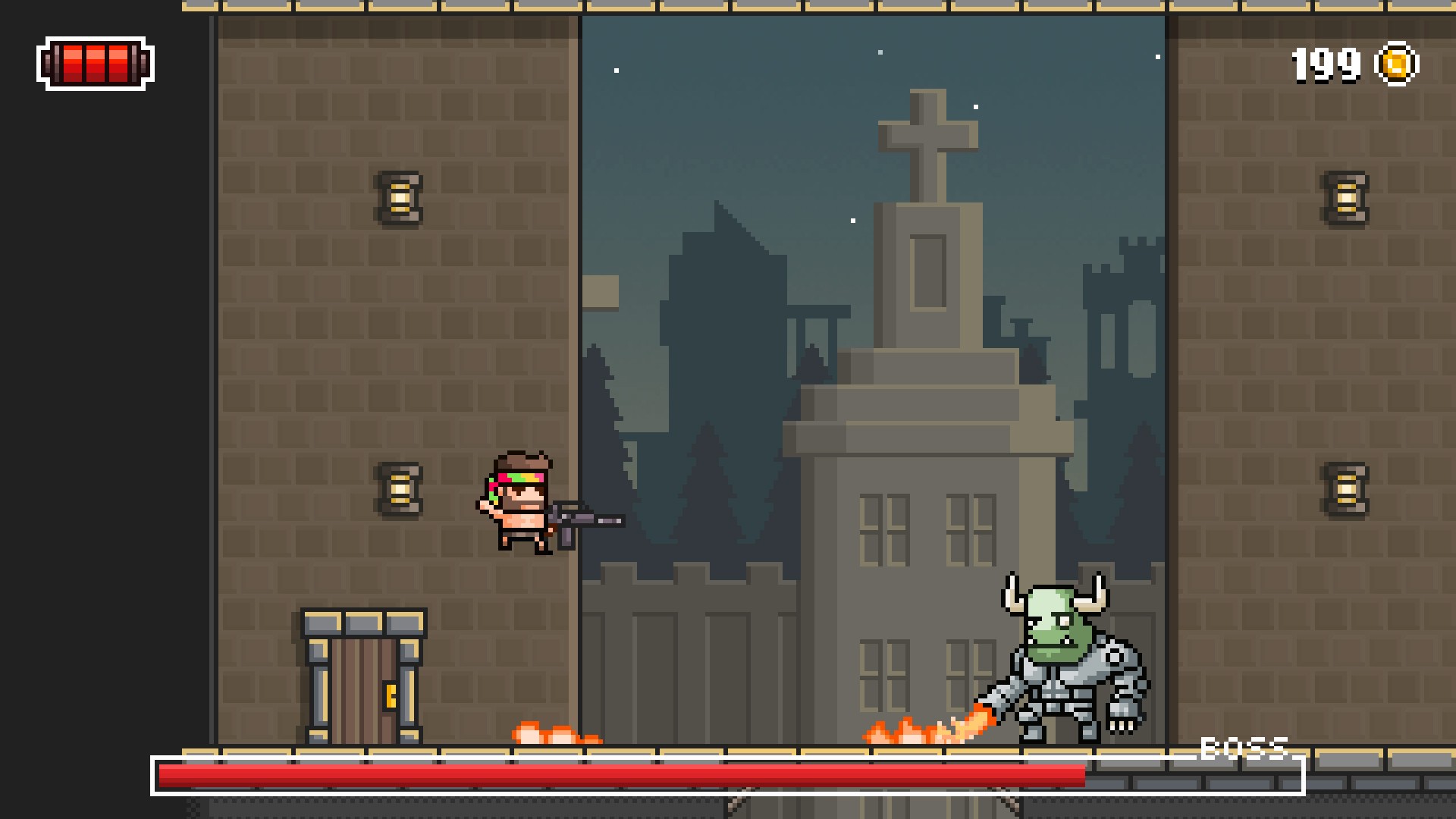 Each different region that you venture through added a unique foe to defeat, would you have to contemplate an aerial assault, or perhaps a creature running at you with explosives in hand? Only time would tell, and you had to be alert to ensure that you could adapt to the new threat that you faced. Once you have cleared 11 stages, you will face a final area boss. You must quickly identify its weakness and then create a plan to attack this chink in its armor. Ultimately, once you understood the basic attack pattern, you simply shoot your gun and jump out of the way. None of the bosses were particularly tough once you worked out how to defeat them. Though the developers added new enemies, it all felt a little simple, and certainly won’t challenge the hardcore platform gamer.

Woblyware has done well to create 9 unique looking regions, they all have their own style, and colour arrangement. With the developers taking so much time working on each area, it was a shame that they didn’t add a larger variety of obstacles and traps. Though the worlds looked different, it all felt very deja vu, jump on one moving platform, avoid the slime, shoot the enemy, and repeat until you reach the exit point. I still enjoyed it, but it could have been pushed so much further. With some minor alterations and some new additions, I think the gaming experience could have easily been pushed to the next level. The character sprites are colourful, and the individual animation and design of each of the enemies work particularly well. It’s a 16-bit retro experience that will have gamers from an older generation feeling very nostalgic.

If you have ever experienced a platform adventure game from the late 80’s or early 90’s, then you will feel right at home with the audio that accompanies all the action. The upbeat tempo and synthesized sounds create a feeling of high energy and drama. The sound effects match the items that are being used, though they feel a little lacking in oomph. None of the weapons feel exciting to use, and the noises created by the aliens are anything but imaginative, it’s such a shame. I would have liked to hear a range of unique sounds on each encounter, instead, it was just a little bland. The audio is certainly a mixed bag, and if the developers had worked on the sound effects as much as the music, then this would have been a resounding success. 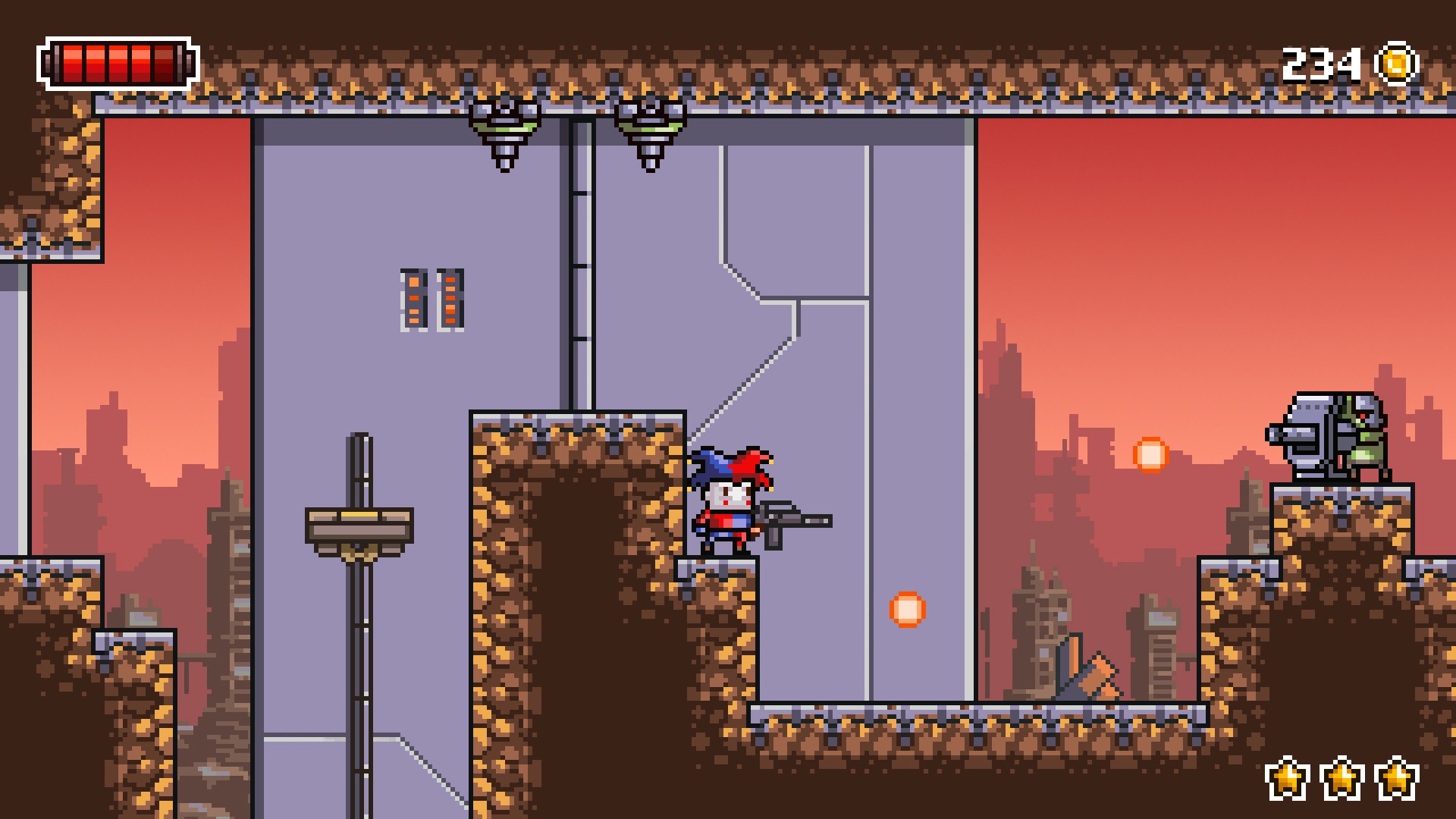 The first level that you take on has a simple tutorial to follow. This quickly gets you up to speed on how to control the game, though in all honesty, you’d probably be able to work this one out without any hand-holding. The ease of which you can master this title really helps you to focus on gathering those stars and unlocking all those heroes. Each level is quite short, so though I found the occasional leap into the unknown frustrating, as 9 times out of 10 I’d fall on a spiked trap and lose health. However, it wasn’t the end of the world as I’d just hit reset, and start again. If you happen to finish a stage, but miss out on collecting all the stars, then have no fear. When you attempt the level again, you will only have to obtain what you had missed out on previously. So my advice if you want it, just wait until you have some more powerful tech and better heroes, and then attempt to get your 100% completion.

With so many levels to take on, you may be thinking that this could take some time to complete. This will heavily depend on how you play the title, and if you want all the heroes unlocked. If you happen to just want to get to stage 108 and say that you have finished it, then you could just leap and skip your way to each exit. Most of the time you’d fail to collect any stars, and for me at least, this wouldn’t be a very fun way to experience what the developers have created. I believe that most standard gamers will just plod along, unlocking bits and pieces, eventually getting to the end. For these players, they’ll be looking at around 5 hours to finish. Like with the majority of Ratalaika Games S.L titles, achievements aren’t hard to come by, and if you’ve collected the majority of the stars, and purchased most of the available equipment, then you’ll be rewarded with 1000 Gamerscore without breaking a sweat. This will be achieved in less than 2 hours playing time.

When the world is being invaded by aliens, you must call on heroes to save the day. Luckily, there are plenty to choose from, and a whole arsenal of weapons available to you to take them down. This 2D platform title is not overly challenging, but I believe it’s a great starting place for anyone who wishes to get into the genre, or for those who just want a casual gaming experience. You’ll find that the worlds are very similar, and there really isn’t a great variety of traps and obstacles to test your resolve, however, I still enjoyed my time playing Random Heroes: Gold Edition. So, would I recommend it? Yes, I would, it’s not the best platform game I’ve experienced recently, but it is fun, and it also proves to be great value for money. This means that you really haven’t got that much to lose by trying it out. Can you protect the world from the alien threat? Pick your hero, select your gun, and leap to the exit. Remember the worlds depending on you!

When the world is being invaded by aliens, you must call upon every hero available to save the day. Luckily Random Heroes: Gold Edition gives you ample choices. It’s time to pick a hero, select a gun, and complete each level one jump at a time.