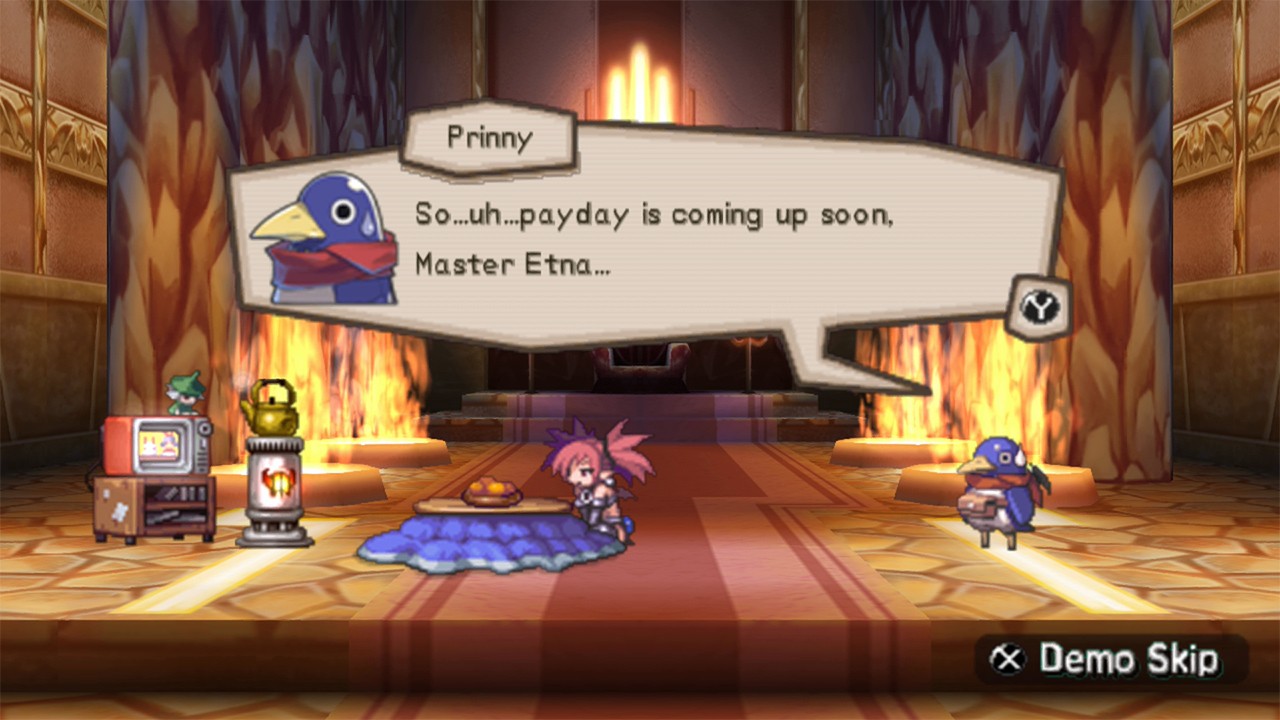 The success of the first Prinny game must have been a fantastic moment for the devs over at NIS. It was able to create a title from an existing IP that was far and away different from the rest of the series and still show an amazing amount of consideration for the attempted genre and play style. By having a platformer action game that incorporated purposely difficult conditions in both actual gameplay and handled controls, players could find brand new ways to appreciate Prinnies and how to work a classic idea in a modern society. Best of all, it was strewn with secrets, both in the way the levels changed throughout the course of the game and in actual secrets baked into the levels and game overall. Naturally, a sequel had to be created, and I’m especially glad it was. It’s the second part of the Prinny duology, and it’s the superior game on all fronts.

Prinny 2: Dawn of Operation Panties, Dood! takes no prisoners in setting up the title. The premise is nearly identical, but more fan-servicey. Etna is in a towering rage again, and this time it’s because someone stole her panties. The Prinnies obviously had no interest in doing this, but they are the target of her wrath and also of her expectations for rectifying the situation. With the threat of being made into Orc thongs if this isn’t fixed immediately, the Prinny leader (who is whoever is at the front of the group at the time) dawns the magical red scarf that allows for a bit more constitution and formulates a plan. It’s clear the panties are valuable, so all they have to do is collect a bunch of other valuable items from around the kingdom, put them in one place and surely the thief will come out of the wordworks and attempt to steal them, thus allowing a citizen’s arrest/execution and the retrieval of the underwear. Is it convoluted? Absolutely. Is it nonsense? Without a doubt. Nevertheless, here we go, and there we went, in the most explodingly enjoyable adventure yet.

Prinny 2 makes sure to not throw the baby out with the bathwater when concocting this secondary title. Everything that was great about the first is still present, with several additional factors added to elevate it further. You still have the option to choose between a normal and brutal difficulty (the difference of which is three hits to die versus one hit), but the new third option, baby, is welcome for players who are just looking to try to explore the game more casually. Baby puts in a bunch of sturdy blocks around the stages to assist with any especially tenacious zones, like over spikes or as helper stones with large gaps. The purpose is to make things easier, not make things easy, if that makes sense. Even in baby mode, the enemies are aggressive, the bosses have insane attack combinations and life bars,, and nothing is guaranteed. This is really cool, because a lot of times the “easiest setting” really becomes about just playing for the story and allowing you to zone out on actual combat (looking at you, Idea Factory). Instead, since the gameplay is the secret sauce of the Prinny titles, this is a helping hand that still asks you to try your best. An excellent balance, and something truly helpful.

Additionally, the combat of Prinny 2 has been buffed up, and the balance in the combo gauge actually makes sense. Previously, in the first game, you only got to fill up the combo meter and enter Break Mode when you made a bunch of insane combos against different enemies or hit the checkpoints strewn throughout the stage. While this doesn’t seem so bad, it wasn’t logical: if you hit an enemy once, that counted for the combo, and future hits wouldn’t count at all. So tough enemies that needed a few rounds of beatings didn’t add up. Now, the whole thing is an upward movement, meaning that all the cakes and pies you gather add immediately to the meter (instead of just at the checkpoint) and you get credit for all the hits you land without getting hit yourself, which means the Prinny in charge at the time can buff up to an additional Break Mode in no time flat. 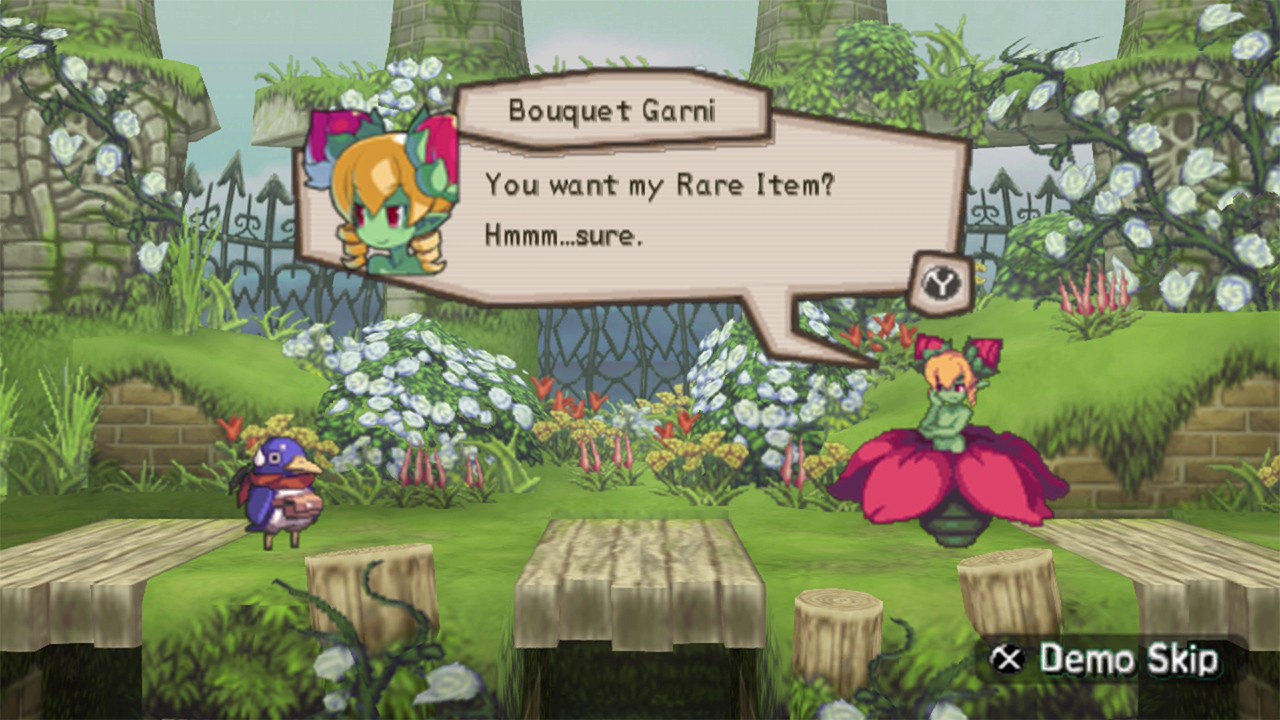 The new techniques are incredibly welcome as well. When you’re glowing with combo energy, the Prinny deals extra damage (that was a given), but now also adds some special attacks to the fray. The biggest and best one is being able to add damage to the hip pound, called the Husky Hip Pound, which just makes sense. Previously, you only stunned enemies and bosses (and it was and is the only real way to defeat bosses still) with the hip pound, and now an extra second of button pushing yields drop damage, much to the enjoyment of all Mario enthusiasts. The Prinny Cyclone takes the already awesome spinning move (to charge up dashes and avoid projectiles) and allows you to have your scarf flail out around you, whacking enemies in close proximity. You still have to be careful, though: overspinning, even in Break Mode, leads to dizziness and then vulnerability. Lastly, the Prinnikaze lets you rocket at enemies and explode, which does some damage but doesn’t actually kill you. I probably used this one the least due to the extremeness of the approach. If you think you can deal damage before the enemy can lash out, great, go for it. Otherwise you’ve just put yourself in striking distance, and a reminder that even Baby Mode players will still die after three hits, so why risk it?

With that established, Prinny 2 then sticks to the formula that made the first an endearing success. Each stage is deceptively short, but still chock full of enemies, traps, pitfalls and, most importantly, hidden totems that you can only find by sheer determination and luck. I have to be honest: I didn’t find a single lucky totem in the first Prinny game until I looked them up online. Here, in Prinny 2, I found several through dumb luck, and I felt AMAZING. It’s crazy that there are these items sprinkled throughout the game that ask you to basically hip pound all over the place with no real reason and yet finding them is so satisfying and cathartic. Firstly, because it helps you with your hip pounding (and, again, it’s the only way to beat the bosses). Second, because they’re pivotal to unlocking the additional game mode after beating the main game, which we’ll actually talk about in a moment. I really want to just stress that, if you loved how Prinny 1 handled (slightly stiff moments from the undead penguins to justify the difficulty), there’s more of the same here, with a couple of small additions (some new and clever bosses, more use of vehicles, and the option to actually assign a vehicle at the start of a particularly tough stage in order to gain leverage). You should know what you’re getting into.

If you do know all that and still want to go forward, I’m pleased to say that Prinny 2 is also more rewarding in the outcomes. Since I was set in the proper gameplay mindset, being able to burn through the game on Baby Mode and see the variety in bosses and the way the levels change throughout the time zones was super exciting. There’s even a great spot to quickly and effectively kill 1000 Prinnies in order to unlock the extra game mode, if that’s your cup of tea. Having some foresight for what is ahead, Prinny 2 plays more easily and honestly more fun than the first one. I think there was a minor stigma in the first game to not go too goofy with some places, so, despite the balance of heaviness and parody, the first game was still more “serious,” if you can call it that. Prinny 2 is genuinely more fraught with mayhem and madness and does so unabashedly and that is a brilliant success. Once everything is said and done, you can move on to the Asagi Wars, and holy hell is that fun. 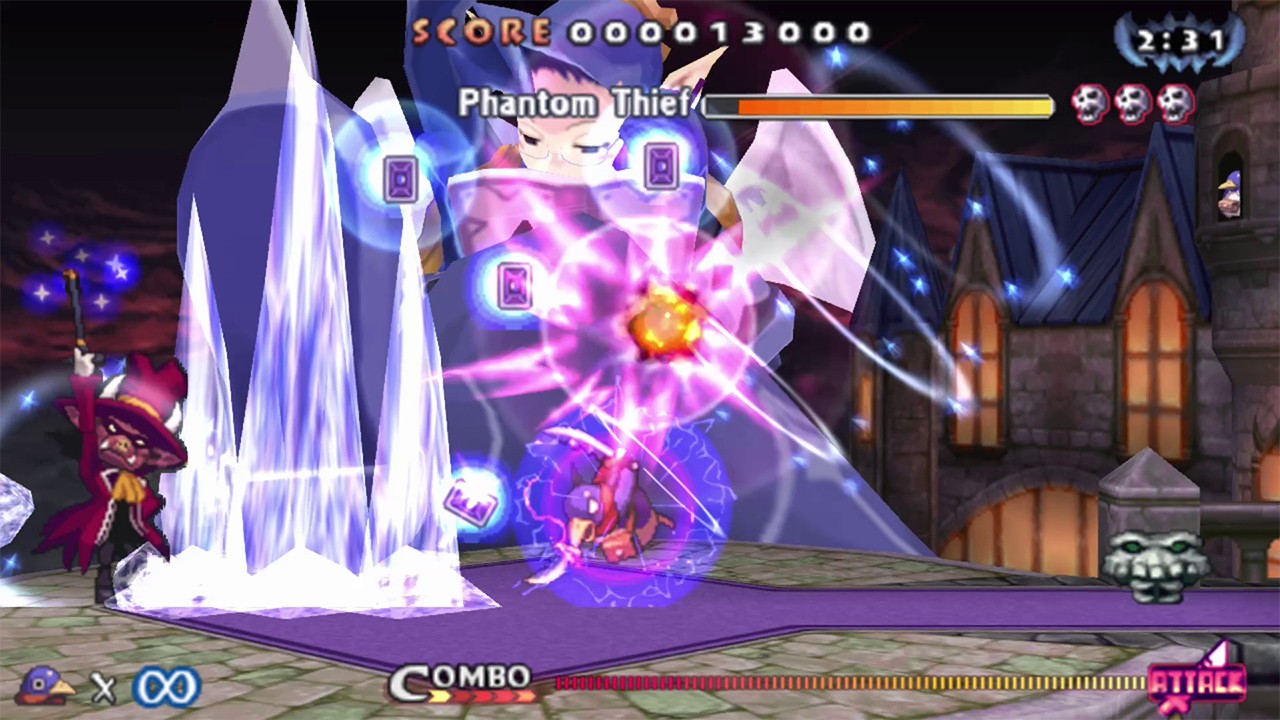 In both Prinny games, there are extra game modes upon completion, but the first Prinny game had it feeling more incidental, like a fun bonus stage once you’ve discovered all the secrets. For Prinny 2, this is like a whole second game, creating a brand new narrative for everyone’s favourite misfit minor character, and one that just made my whole freaking day. With Asagi now reincarnated as a Prinny, she has to fight alternate versions of herself in order to basically win her own freedom, not become a hero, but somehow justify her existence within the Disgaea 2 game. It’s this insane blend of brand new action with what we’ve already seen with the Prinny’s, swapping out the three hits for a stamina bar, adding in weapons and creating these amazing stages of boss battling. It’s so much fun that it’s actually worth mentioning that you NEED to beat the main game in order to see this through.

At this point, I need to point out that both Prinny 1 and 2 are being re-released in a joint package for the Switch as Prinny 1*2: Exploded and Reloaded. This is an excellent opportunity for players who missed the games on the PSP and want to join in on the fun, and, honestly, it’s a fantastic set of titles to enjoy. However, only physical purchasers will have the joy of the two games being married together: digital folks need to purchase each separately. I don’t know why, but I was really hoping the digital package would also be two games joined into one with a singular launcher. It’s okay, it doesn’t change the individual experiences at all, but it’s something I felt was missing. Maybe I’ll get the physical version for Christmas: the limited set comes with a build-your-own Prinny block set, plus a soundtrack CD, artbook and poster, and I don’t know why you aren’t pre-ordering that this very second.

Anyway, Prinny 2: Dawn of Operation Panties, Dood! Is superior to the first in every single dimension. It’s both easier and more difficult, the abilities are more versatile, the levels are similar in length but wholly different in design, and the after game is something to really look forward to. It’s like Godfather and Godfather 2: saying the second one is better doesn’t diminish the first. It’s simply showing that the Prinnies are marching in the right direction, and we are all probably better that there isn’t a third.

Prinny 2 is literally everything great about the first game but made better, more ambitious, and even more reasons to keep sacrificing yourself, dood.