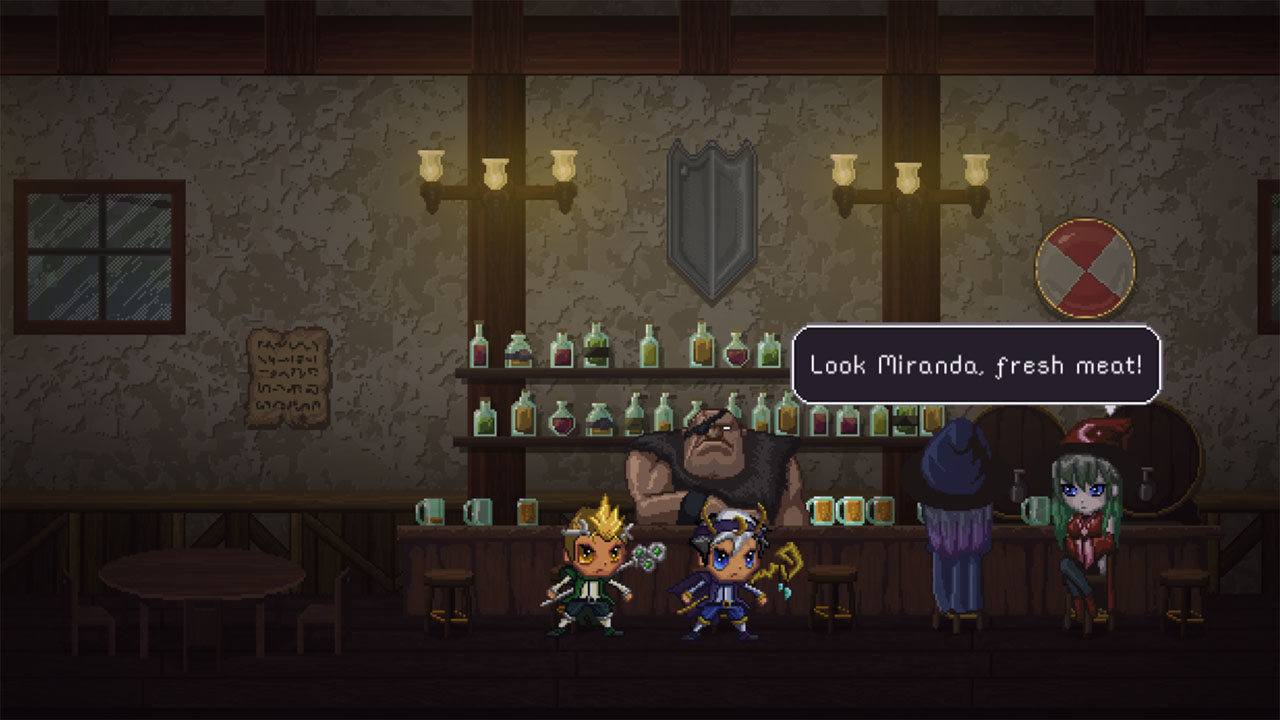 Movies and books are full of tales of men and woman sacrificing their lives for the greater good. These heroes and heroines would do it again in a heartbeat if they could, but the Grim Reaper won’t allow it. We all know the deal, one run at life, so we best make the most of our opportunities. There is an exception to this rule. 2 young wizard apprentices must complete their mission to save the day. What spells can they cast I hear you ask. The answer, only 1! Resurrection. REZ PLZ is a pixel art platform title developed by Long Neck Games and published by Graffiti Games.

The story revolves around 2 unlikely heroes; Arcan and Zeph. These wizards are more interested in partying than studying to be great magicians. They have only the spell of resurrection in their arsenal, and a staff to fight their way out of trouble. The enemies they encounter are brash and bold and are hardly quaking in their boots with fear. You must use the surrounding environment to your advantage. Working as a team you will overcome any problems and solve any issues.

The tale begins with the 2 brothers running late to their latest lecture. When they decide that attending is for the best, they must perform a spell. This ends with dire consequences, Arcan blows Zeph to pieces ending the lesson early. When the pair come around, they are in the campus hospital and confused about how they are there. A loud crash interrupts them, and monsters appear from every crevice. They exit the building to identify the source. The Dark Lord’s minions stand in their way. Too weak to fight, and with no magic to challenge them, they accept their fate. Discarded into the sewer where they must rely on each other to progress.

The action spans 36 levels across 5 different landscapes. You have the option to complete this title solo, or you can grab a friend and share a couch to play this in Co-Op mode. You will discover a variety of traps and obstacles on your adventure. As the story progresses, the difficulty increases. You must look at new ways to overcome the obstacles in these short but complex stages. The game premise is simple, move from point A to point B, with at least one Lazarus stone intact. What’s a Lazarus stone? I hear you shout! They are the power behind your ability to rise from the dead, and each player holds 3 at any one time. You will find more located around each level, so keep your account topped up. Trust me when I say you will need them. 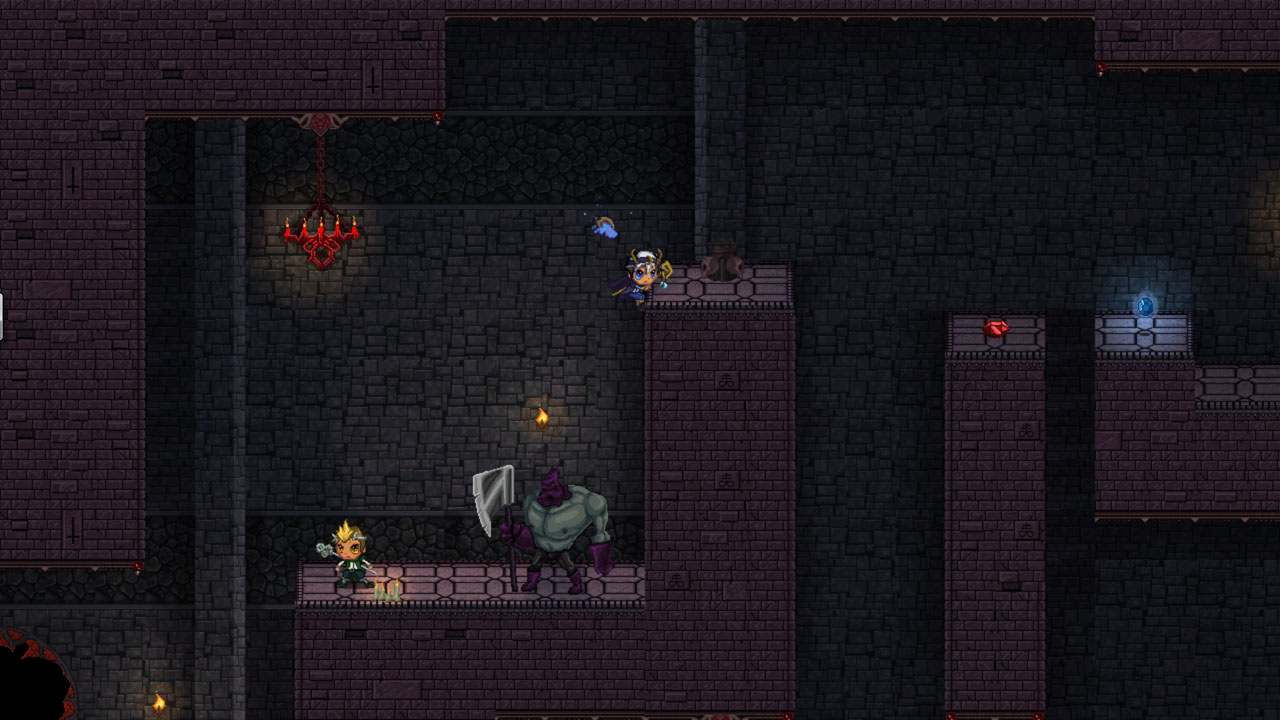 Death is an upsetting time for everyone involved, but in REZ PLZ it’s the only way to complete each stage. You must study your path and sacrifice one brother to progress. You can traverse impassable spikes once a body becomes a platform. Do you need to hold down a pressure switch, but have no object at hand? That’s ok, kill your sibling, and use his head as a makeshift weight. It may all sound very macabre, but it’s this outside of the box thinking which makes this game such a joy to play. As you scan each stage, you formulate a plan which rarely comes to fruition. You soon come to realise that you must piece together each level one chunk at a time. I put my pride to one side the moment I knew that failure was inevitable. It’s all about the perfect jump, and knowing when to resurrect or kill your partner. Small mistakes can be catastrophic. These will cause you to end your run, and guarantees frustration.

On completion of each stage you receive a rank. It ranges from S to, well; I don’t know, as the worst I got was a C, but lets say the lowest is an E. The score reflects the time taken, secrets obtained, and number of deaths. Whilst attempting this solo, I found that achieving a high rank was almost impossible. Having to change player slowed down the action. If you combined forces with a like-minded individual, then the game flowed, and victory was in the bag. The Co-Op mode is great fun, but stressful when things don’t go to plan. Heated debates, and fallouts are all but assured.

REZ PLZ is a nod to all things retro. Small levels and simple pixel images make up the visual presentation. The sprite’s vivid and distinct style is at odds with the landscape, and its dark and dull colour palette. This dark imagery makes the stages hard to traverse and adds to the gameplay difficulty. Each of the 5 worlds has their own personality and style. This helps to keep the gameplay fresh. Making it lacks a sense of a repetitive feeling. All the animation and movement are smooth. The level designs emphasise the clever game mechanics. They were challenging and well thought out, making this a fun yet tough title to take on.

Like the landscapes, the audio uses a dark and sombre theme. Slow paced songs match the contemplative mood. This creates a daunting atmosphere. The sound effects match the actions, but doesn’t add more than its peers in the genre. The narrative is presented in text format, but the characters talk over this is a nonsensical way. It reminded me of The Sims. The lighthearted nature of the voices gave a respite from the theme of death. 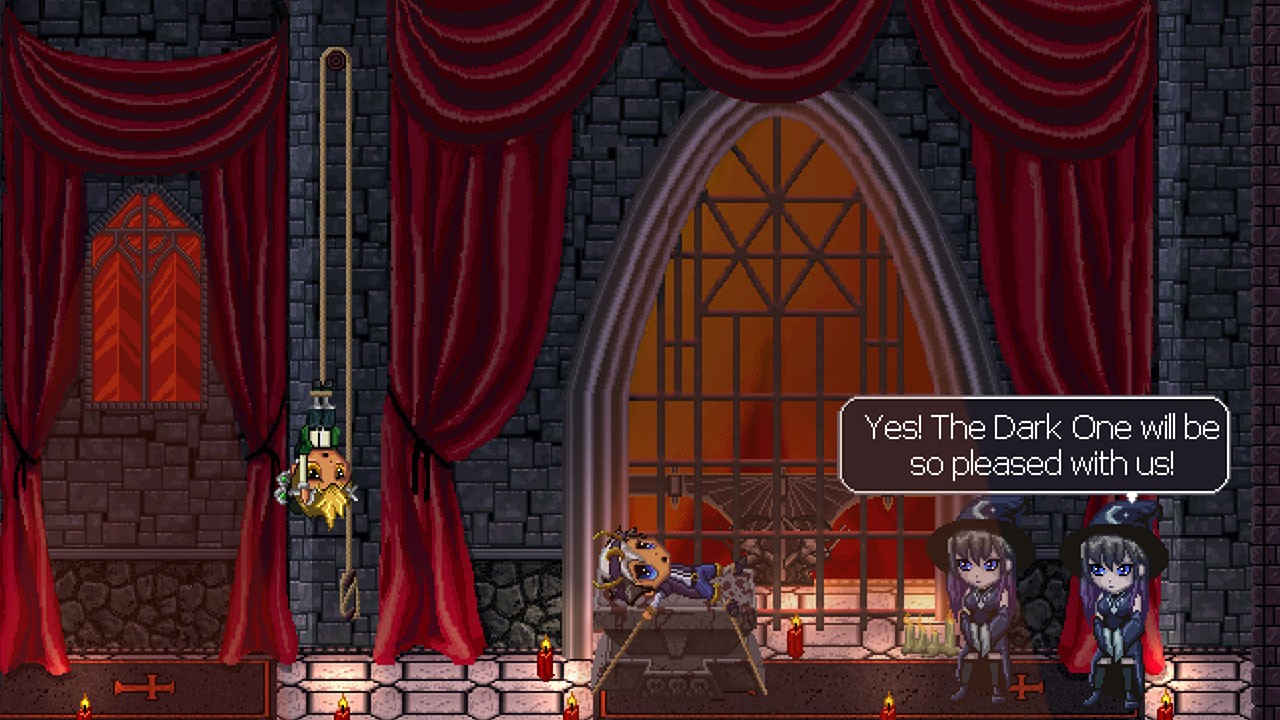 I enjoyed playing this game, yet I disliked the control system with a passion. No matter how much time I invested, I could not master the button layout. I have to stress that this is more than likely a “me” issue, and may not affect you. I would resurrect my dead team mate by accident as the player swap and spell casting share the same button. The developers should have mapped the action to a different button. Another issue was the controller sensitivity. I use a pro pad with the long analogue sticks. This affected my accuracy, causing unnecessary deaths, and much frustration. Again, it could be me, but it’s something that you will need to consider. Other than the highlighted points, the ability to move both characters was well done. It was one of the better examples of this style of play that I’ve come across.

Whenever I play a platform puzzle title, I’m always worried about the replay value. Will the developers add extra game modes, or collectibles to keep you coming back for more? Luckily, that is exactly what Long Neck Games have achieved. A challenging achievement list asks you to get an S rank on several levels. This will drive the completionist’s crazy, they will need to practise and be patient. The Gauntlet mode adds a further element of difficulty to the gameplay and isn’t for the faint of heart. Hidden collectibles are available on every level and finding them isn’t straightforward. I found this to be a very tough title, but the demand for perfection kept me coming back for more. As a solo player, you will need to invest around 15 to 20 hours to complete this game. If you don’t fall out with your friend, you’ll be looking at roughly 12 to 15 hours of Co-Operative fun.

REZ PLZ is a game that took me by complete surprise. I began thinking it would be another platform game that ticked the boxes, but didn’t excel in any areas. I couldn’t have been further wrong if I tried. The delightful art style is on the high end of what I would expect from an indie developer. Though the audio isn’t exceptional, it does its job well. The difficulty may put several gamers off, but I’d urge them to keep plugging away. Practise makes perfect, and this title is worthwhile. Do I recommend that you buy this title? Yes, I do! Even with the controller issue, I had a blast playing it. Co-Op mode was fun, improved only with the opportunity to play online with friends. With plenty to make you return and play REZ PLZ is money well spent. Death doesn’t have to be the end, and sacrificing your brother isn’t all that bad when you can bring him back to life. It’s a big “No, no” to defile a corpse! You should put that thought to the back of your mind as it could be the only way to beat the stage and win this game.

Death isn’t the end and sacrificing your brother isn’t all that bad. Use his body to progress in this unusual and macabre platform experience.