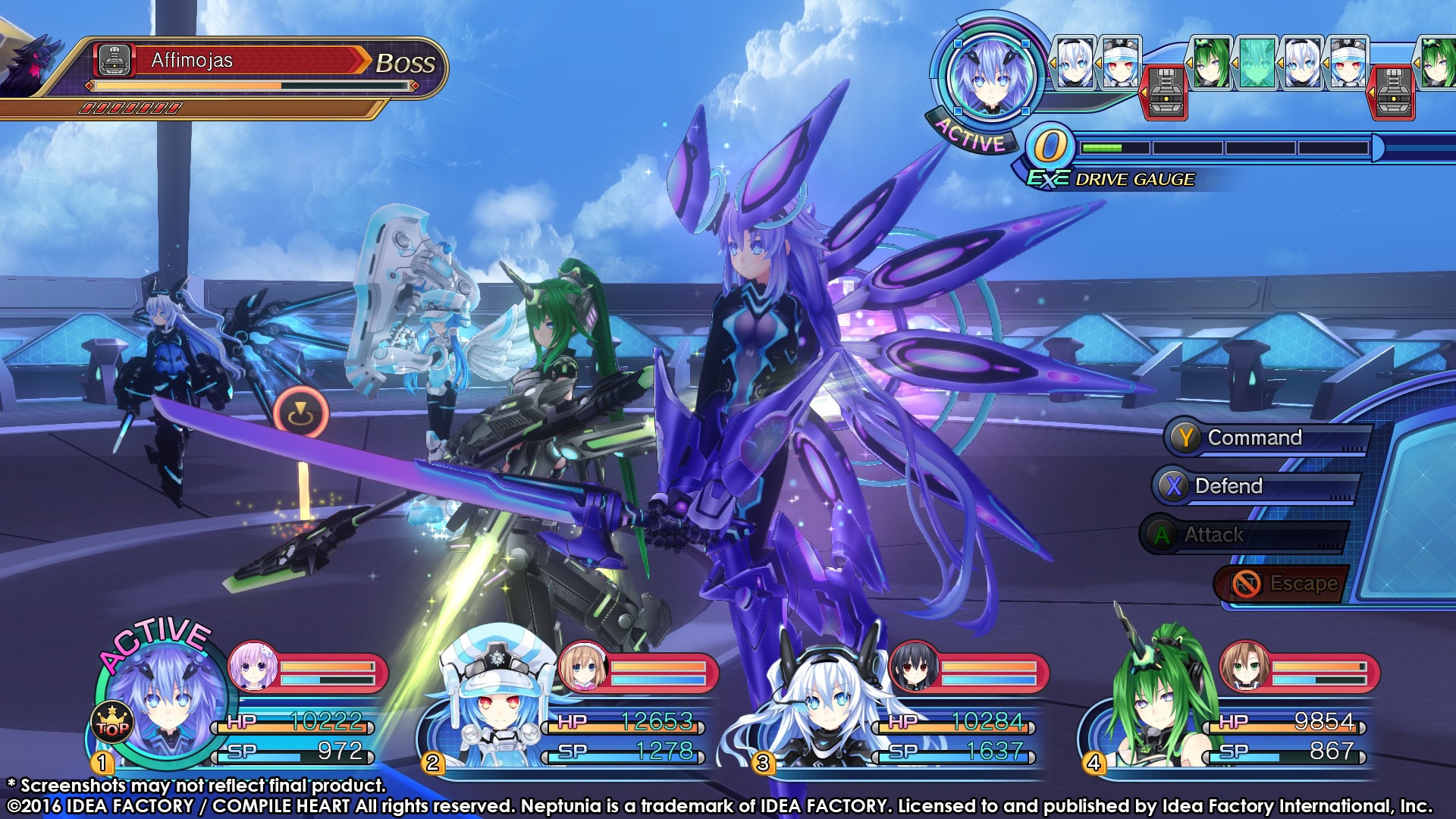 It’s nice to finally see a new Mega Dimension game. For those not familiar with the concept of these games the idea really is that each character represents its own game console, starting with Neptune who actually represents a never released console by Sega the Sega Neptune. Each character is a goddess, which can transform via HDD mode when certain requirements are met. Transforming into these and kicking some butt is by far the most satisfying thing about this game.

Megadimension Neptunia VII starts out with Neptune finding an old battered game console. She brings it back to Nepgear who ends up trying to repair it, after she fixes it says a message. Unfortunately this game console ends up sucking them into another dimension which is on the brink of destruction. The story is pretty light-hearted and often actually makes fun of itself. It’s one of those games that never takes itself too seriously at any time and always throws humour in. The Voice actors are fantastic though some of the best voice work I have heard in an anime game a special mention has to go to Neptunes VA brilliant job.  The fan service is there too for those who like that. It’s very well, blatant should I say. The camera decides it has to zoom in on the female anatomy whenever there’s a transformation and it seems a bit needless an option to turn it off (the zoom) would have been appreciated.

Been able to go down different routes via the story with playing as different player as the protagonist is a great touch as well it made the game lot longer and story a lot better than it was originally once you are done with one of the paths you can just choose to do the next one no need to restart the game or anything daft like that. 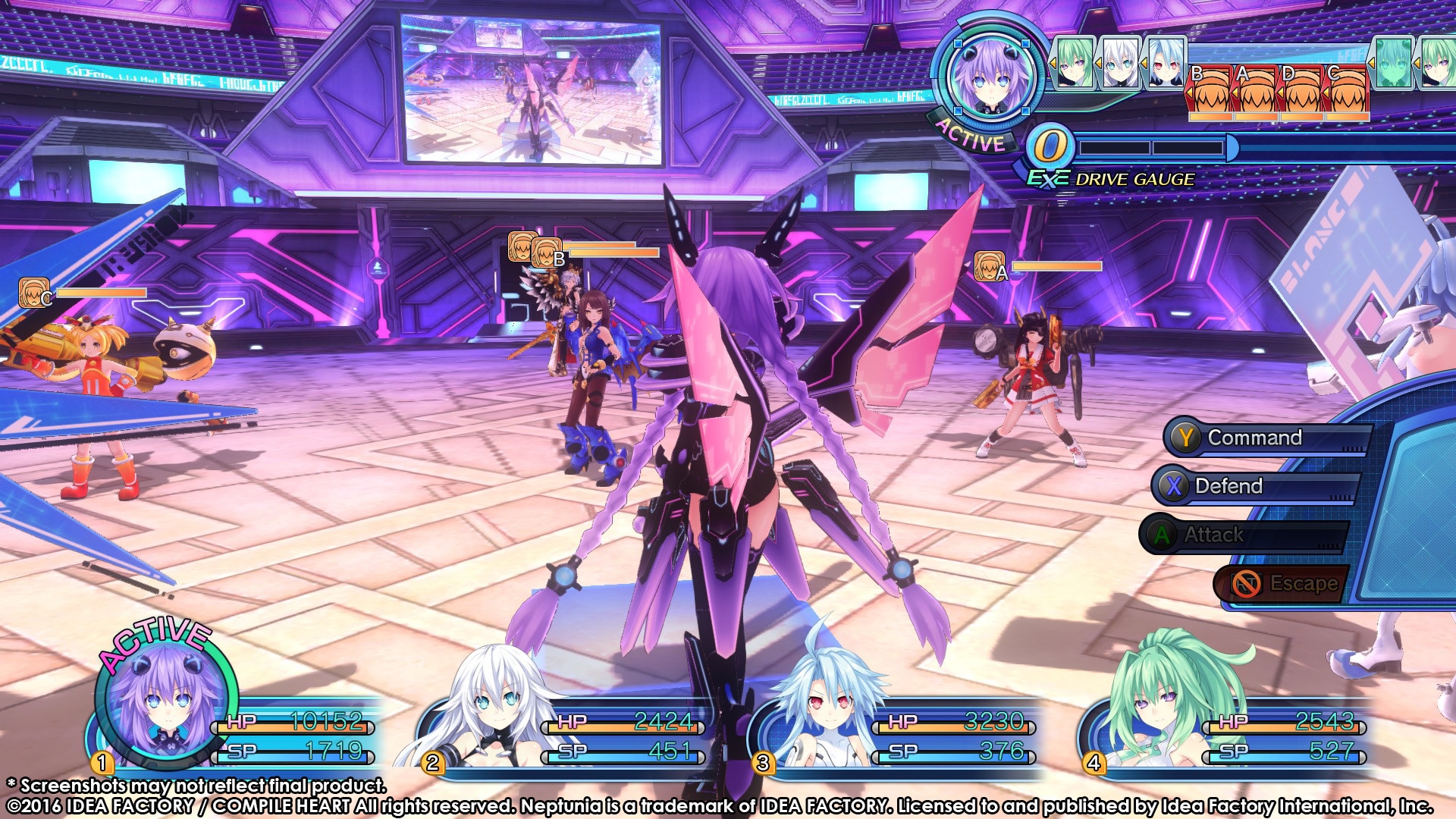 One thing that bogged the game down a bit was the endless tutorials. Because of them, the game didn’t really get going for me until I was a couple of hours in. Some are really needed but sometimes I often found myself saying “really that’s it? That’s so simple why do I need a tutorial to tell me that” One thing I liked about the battle system was the idea of having characters stand in certain places to instigate an attack. For example standing in a triangle would start of a delta attack and you all have to be in the same form otherwise you can’t do it these are called formation attacks. Not only do these attacks look awesome they also deal massive damage.

I also liked the way giant battles are done. You have to navigate your way over platforms in order to attack. it really became strategic and it’s a clever, fun way to make battles a lot more interesting. Using formation attacks in these is a must as you can have each character on a platform. In terms of graphics the game certainly looks better than past Mega dimension games as its also available for the PlayStation 4.  The game always ran at 60 fps and I did have a couple of issues with slowdown during dungeons and transformations.

The music in the game for what it’s worth fits well with the game It did become a little repetitive at times however and maybe a little more variation would have been nice. Also sound effects don’t sound as good as an attacks look. Some sound effects are reused from games that are years old and maybe it’s time to redo them. 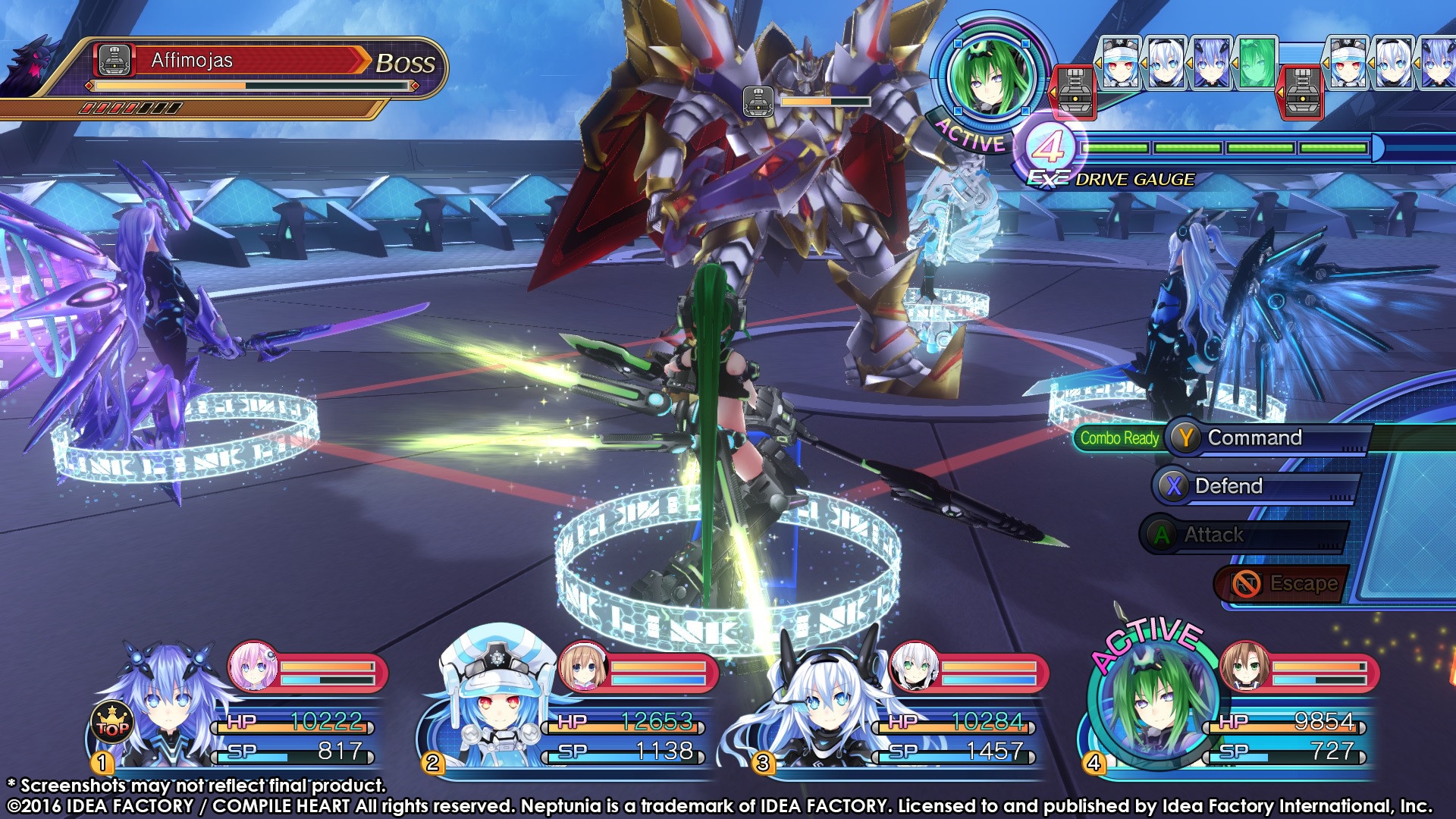 The dungeons are massively improved from its predecessors. They are much more opening unique and fun. Overall they are much bigger and exploring them is worth it as they hold loot that’s worth it. Although I did notice some assets are reused from the other games which are a little bit disappointing. Numerous enemies will look familiar to those who have played the games before it.

Speaking of the games before it I did notice this one is significantly harder than the previous ones. I was constantly finding myself on the brink of death and running out of both SP and HP. Thankfully leaving a dungeon replenishes both.

Overall I did enjoy Megadimension Neptunia VII and it’s definitely an improvement over the past games. If you throw in all the paid DLC as well there’s a lot of your time that could be consumed while playing this game. It’s funny witty and has a lot of character. It won’t be for everyone but if you’re a fan of turn based JRPGS, anime or are just looking for a good time sink I would say give this a try. If you can get past the inevitable fan service this at its core is a great game that tells and good compelling story. The option of the Japanese VA is there too should you so wish for it.