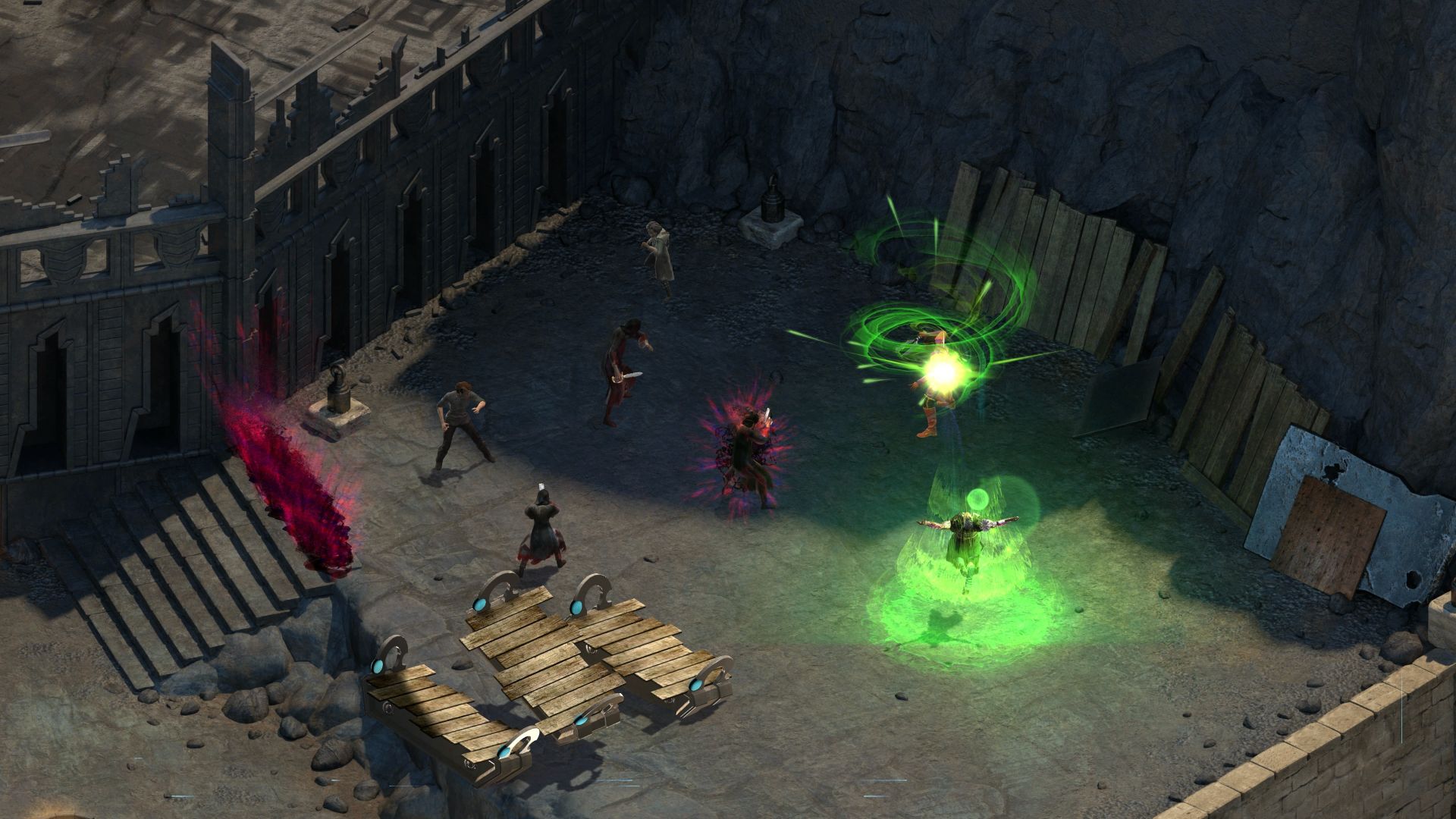 From a journalistic perspective, we live in a world of hyperbolic absolutes in which so many things are described as the best or worst things ever that it can be difficult for the reader to ascertain what is really worthy of their time and money. With that statement in mind, I’ve had to check and double-check that I’m not about to fall into the same trap as so many other writers, because in all honesty, I think Torment: Tides of Numenera might be the best game I’ve played in years. Even if it isn’t, and even though it’s only February, it still has a very good chance of being my favourite game of 2017. Even if that turns out not to be true, and some surprise title (or maybe Zelda: Breath of the Wild) blows me away, then Torment really is an absolutely exceptional game in every way that matters.

Let’s begin with a brief overview of what we’re dealing with. Torment is a traditional isometric RPG that looks, feels and plays like the classic games it draws inspiration from, namely Baldur’s Gate and the game that seems to have influenced it most directly, Planescape: Torment. Not only is the detailed, pastel-hue aesthetic similar to those games, but so too is the focus on traditional RPG elements such as dialogue, plot and the ability to resolve almost any situation without the need for violence. Games often claim alternative means to complete tasks, but I haven’t seen such a promise as well implemented in any game as it is in Torment, and there are almost always three or four different ways to resolve each fight or quest, and even simple conversations can vary dramatically based on character class, skillset and alignment.

Key to the success of having such a range of options is ensuring that each of them is as interesting, rewarding and ultimately meaningful as the next. Torment does this through its rich lore, fantastic plot and excellent dialogue, all of which are nothing short of masterful in comparison to even the biggest budget games. In Torment, it feels as if there truly is no such thing as a bad decision (at least not from a gameplay perspective) and rarely for an RPG, you are likely to be able to proceed through the game exactly as you think your character should – whether that be as a murderous psychopath, a calculating mechanical genius, or a benevolent pacifist.

On that note, character creation (which I’ve read was a disaster during earlier stages of development) is delivered as a unique, seamless experience that is linked to an important element of the plot that recurs throughout. Organic, choice driven character creation (rather than the more traditional stat screen scramble) is not especially new or ground-breaking, but in Torment, I loved the continuity between the mechanical need to choose stats and skills and the absolute focus on plot, lore and total immersion in the world.

And what a world it is. Torment is set on Earth many aeons in the future, and whilst humanity still exists, the planet is shared with a great number of other creatures of almost uncountable variety. The game is set in a time known as the Ninth World, and it is generally accepted that eight previous ages have been and gone, leaving only the physical remnants of the great civilisations of the past behind. These remnants – artefacts like weapons, robots, ornaments and other oddities – are known as Numenera, and can simply be sold as trinkets, or equipped for various stat increases where appropriate. 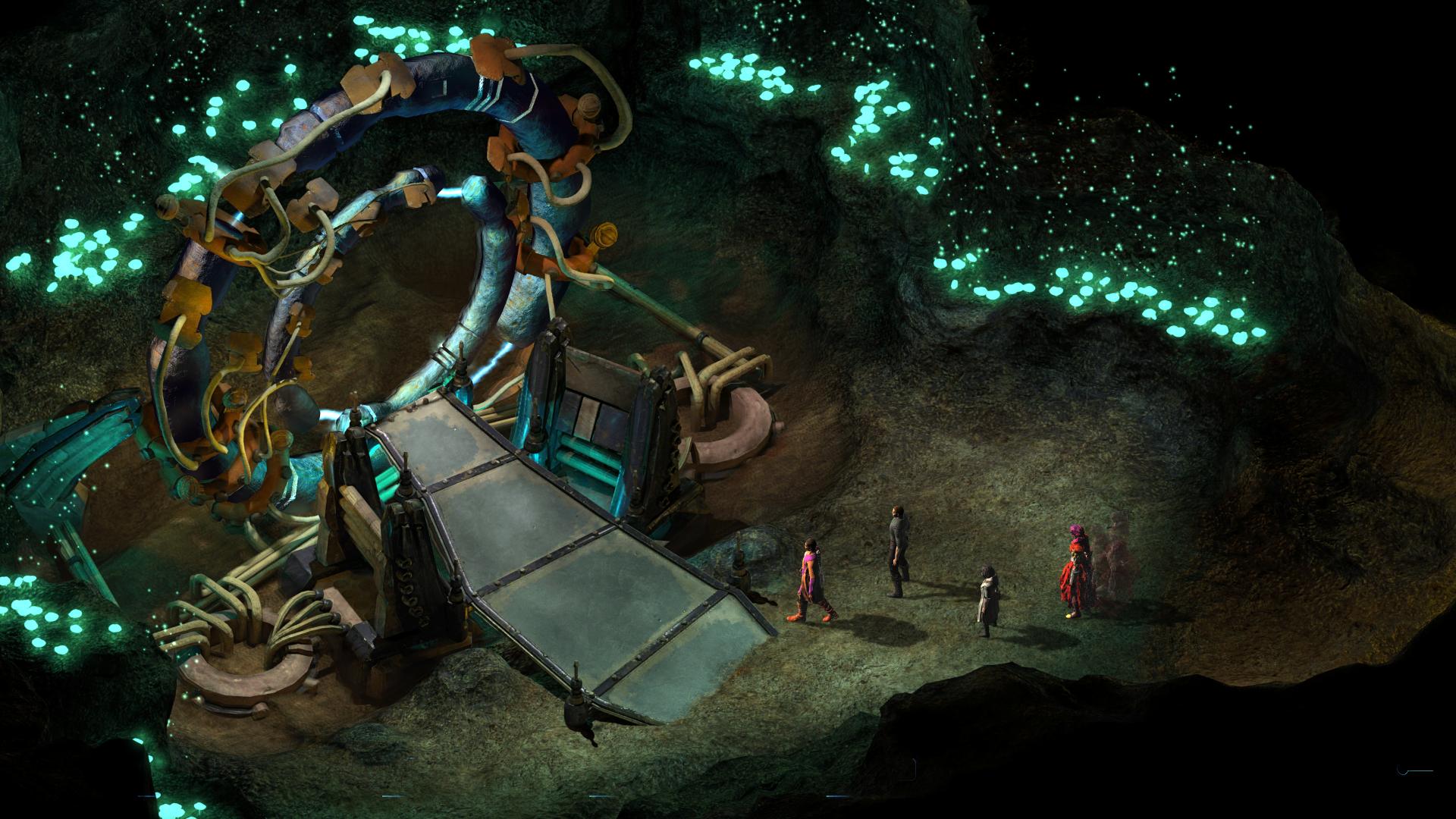 One particularly interesting set of Numenera are known in-game as cyphers, which appear as powerful and unstable past-aeon technologies, each of which is effectively a single use weapon, potion, buff or similar. The unusual bit here is that each is kind of unique (I say kind of because many of them have similar effects) and if you carry too many of them, you’ll begin to experience a debuff, known as a negative fettle. The intention here is to drive players to experiment with different cyphers rather than to hoard them, as is so often the case in similar games.

As a player who collects everything of interest and keeps it indefinitely, I’ve often struggled through the toughest sections of a game, only to realise I had finished it without using my most powerful items. As a result, I quite liked the cypher mechanic because it did drive different behaviour in my play style and challenged me to think differently. The downside of this is that cyphers do feel as if they are combat focussed. Quite a few provide stat buffs that can help with dialogue (or other) situations, but that doesn’t often feel like the right application for them. Regardless, the way that cyphers are used is another excellent way of linking player behaviour directly to the exceptional lore found within Torment, and that level of detail is something I really admire.

Considering we’re loosely on the subject of inventory management, I should mention that Torment presents the new gold standard for intuitive controls in an RPG on consoles. The D-Pad provides access to the three character related information panels and the area map, the lower triggers give access to abilities and useable items via radial menu, and all of the other face and shoulder buttons do the things you expect them to, whether that is cancel, confirm or advance a character level. For all these things (including anything even slightly ambiguous) you’ll see unobtrusive button mappings in the bottom corner of the screen wherever you are. Navigation, combat and dialogue is so straightforward that each comes with about five or six lines of tutorial text, and that is absolutely fine. The icing on the cake is that new abilities and items are simply added to the trigger button radial menus automatically, I mean come on – why don’t all games just do that?

Depending on how you play, combat is somewhere between extremely rare and fairly uncommon, but when the gloves do come off, it feels important and meaningful in the same way as it does in say, a Fire Emblem game. Players control a party of up to four characters at a time (drawn from eight that I found, plus the player) and all combat is turn based, with an initiative system to decide the order of play. Weapon, ability and cypher use is the mainstay of combat, but as with everything in Torment, there is almost always another option.

Take, for example, the first major fight, which is used as an example to illustrate the point. The player has access to two characters alongside their own, and each of these has a mix of ranged and melee abilities that enable them to gain an edge in the fight. The player (who at the time has little by way of martial prowess) can also use their skills in strength, wit, machine knowledge and speed to manipulate the battlefield to attack enemies and debuff them should they choose to do so. Finally, it is even possible to force cowardly enemies to flee from this battle, or to negotiate and talk the leader down should you have chosen the right skills. 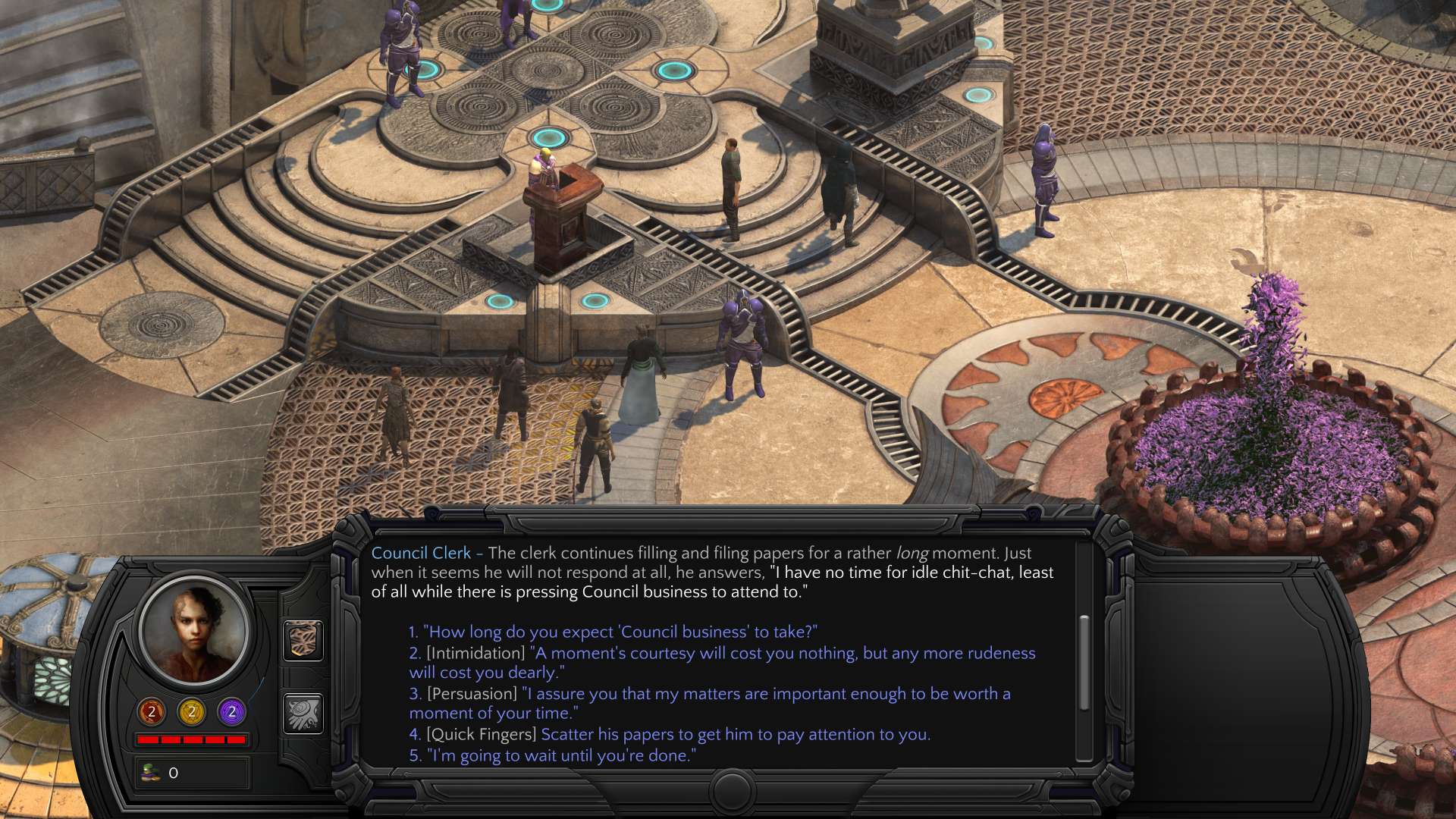 Even though it works extremely well when needed, players won’t persevere with Torment because of the combat. Instead, this game truly excels because of an involving plot that really brings to life the staggering and unique world that the game takes place in. The writing in Torment is nothing short of exceptional in every way, to the point that I think it might be the best I’ve ever come across in a game. Dialogue between characters is equally incredible, and I found myself hanging on more or less every line, desperate to find out how things would develop from one conversation to the next.

The Ninth World in which Torment takes place is probably the star of the show, even if it is primarily the writing that brings it to life. The bizarre, otherworldly lore is so rich and heavy that it is almost too much to comprehend, and I can’t think of a single forgettable character or situation anywhere in the game. Sure, the early town of Sagus Cliffs is designed to provide a gentle introduction, but the characters within it and the scenarios that occur beneath and about it are nothing short of extraordinary. The Bloom, for example, is a living organism that spans for miles beneath the city, providing a home for a teeming array of sentient life, despite the dangers associated with living in what is effectively a giant stomach.

With such exceptional writing around both the plot and the dialogue throughout, Torment is already unique because it offers something rarely seen in modern games, but it expects players to read, understand and engage in ways that are equally rare. If you want to read every dialogue option, a single conversation can take five or ten minutes on average, and some take much longer. I also found myself somewhat swamped by the lore in Torment, and were it not for the superb journal system, I might even have found myself having to keep notes about who was who, and what each of them wanted. If I had to find fault with Torment (which is not easy) I guess I would have to call out the fact that there are some frame rate stutters as each area loads and the player begins to move, but that’s nit-picking at its worst really.

I opened this review by exclaiming that Torment: Tides of Numenera is absolutely exceptional, and I really meant it. Games like this don’t come around often (about fifteen years since the last one in this case) and should be celebrated. Torment might not be the most action packed game, and whilst it is attractive, it isn’t going to blow anyone away with pyrotechnic wizardry. Instead, this is simply an unusually well realised RPG that also happens to take place in an incredible world that draws upon and surpasses the very best science fiction. The writing is nothing short of exemplary, and the execution is near flawless. Torment is truly a special example of how videogames can be so much more than simple, mindless affairs, and because of how focussed – how complete – it feels, I might even go so far as to say that Torment: Tides of Numenera is a modern masterpiece that has no equal. Buy it, buy headphones and provisions, then immerse yourself. You will not regret it.