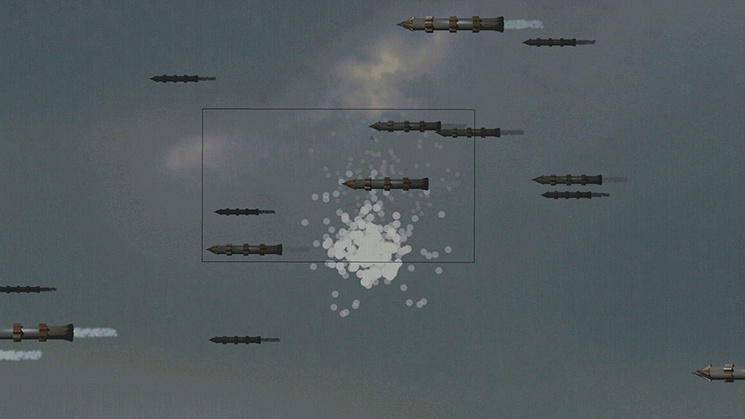 Hullbreach Studios are trying to take you back to the past with Defence Dome, where times were much simpler and games followed accordingly. Your objective is very simple, missiles will move horizontally from right to left, at various distances from you and your task is to shoot them down from the sky using very simple looking bullets. You are scored on the number of missiles you manage to shoot down through three modes.

A simple straight tutorial mode, a Blitz mode where you try to get as high a score as possible, and an endurance mode, where you’ll try to keep the left hand side of the screen free from attack. In its favour,  Hullbreach have decided to utilise the Wii U gamepad as an aiming reticle,  so you’ll spend your time using the pad screen to aim closer to the missiles in the hope of bringing them down.  It provides a novel approach to a very simple premise. I’m using the word simple a lot here, because Defence Dome doesn’t offer much to the player after the first fifteen minutes of play of any real depth. That’s not to say a simple game is a bad thing, however there are too many issues where you feel more care and attention would have produced the type of game you pick up for a five-minute score attack on a rainy afternoon. 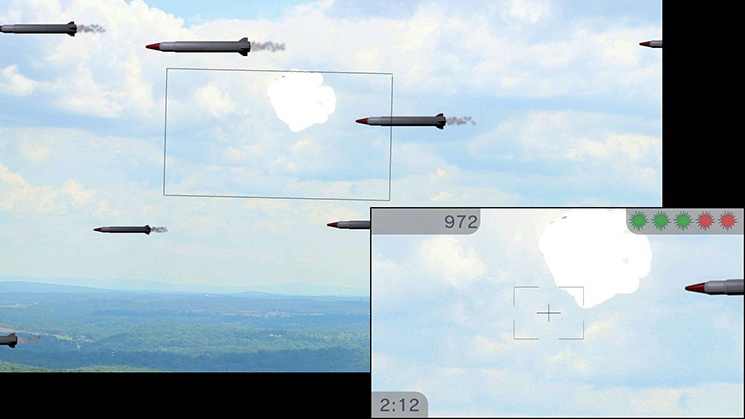 Playing Defence Dome is hard work and frustrating but not is the good sense. While the tutorial teaches you the very basics, it does nothing to give you an idea when you should be firing in order to hit the further away missiles. It is very much something you have to learn for yourself and it seems to be hit and miss as there were too many times when a shot I could have sworn was on target still managed to miss. Hitting the smaller further away missiles is almost impossible using the gamepad, as you need to be out of the field of vision the gamepad covers to correctly distance your shot, so you’ll spend half your time going between the control screen you should be using and the television.

A simple change to the reticle, or having it flash a red colour when a shot was going to be on target would have made the game more enjoyable, almost let it become a test of reflexes as you became accustomed to the control through the game pad. What you are left with instead, is the constant feeling that you are ever so slightly out of control, which in a game where accuracy is the key requirement is a fundamental flaw that potentially ruins any patience you will have for Defence Dome.

If that wasn’t bad enough, the aiming with the gamepad is so easily misaligned, that you’ll spend too much time resetting the aim reticle when you really shouldn’t have to. It makes you wonder if a bit more playtesting would have managed to sort that issue out. Again, in a game that wants you to be Quick Draw McGraw, it is a major failing that simply removes a lot of enjoyment. When faced with the Endurance mode, where you have to shoot all of the missiles that come at you, you’ll come to realise that the control mechanisms that Hullbreach have given you simply are not up to the task at hand, and the difficulty is nigh on impossible after mere minutes of play and you’ll never really feel that you have a chance of winning after a few tries.

Looks wise, Defence Dome is dull, with a photograph of a real life landscape for the background, and few differences in the missiles you are trying to shoot down that it starts to tire very quickly. The shots you fire look like cotton wool and the explosions look exactly the same. The sound is absent apart from some explosions and the title screen music is doing its best to win the award the most annoying title screen music. It’s uninspiring and completely forgettable, so it fits in well with the rest of the game.

Defense Dome has a number of major flaws that remove any real fun that might of saved it from being a simple throwaway title. Unfortunately, dull graphics, sloppy gameplay and lack of care and attention guarantee it is definitely a title you’ll be glad to see the back of.