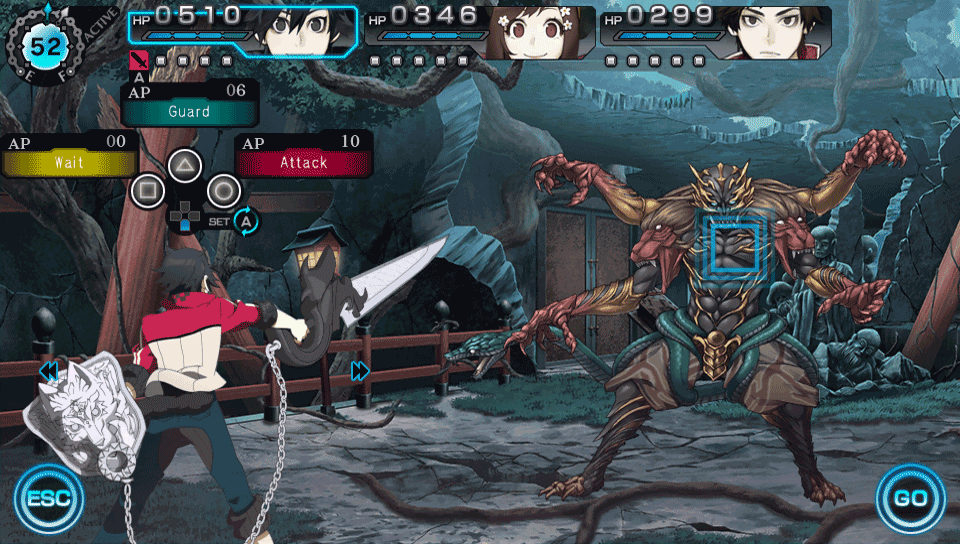 It might be as dead as a doornail in the West, but thanks to its ongoing success back in Japan, the Vita just keeps ticking along while managing to provide a steady stream of unique and decidedly Japanese titles. The output isn’t likely to win the ailing handheld any new fans, but it’s games like, Experience Inc.’s brilliantly bonkers, Ray Gigant that will ensure the Vita’s ongoing position as the hardcore gamers handheld of choice.

Like the majority of Vita-exclusive titles released in the past few years, Ray Gigant’s distinct mix of genres isn’t going to be to everyone’s tastes, but for those looking for something a little different, this somewhat unique mix of visual novel storytelling and dungeon crawling mechanics makes for an enjoyable if relatively linear adventure.

As you’d expect from a game of this ilk, the characterisation and storytelling can get a tad melodramatic and the initial lead certainly suffers from being a bit of a……..well, he’s a bit of a douche if truth be told. Like most characters in the game though, Ichiya Amakaze becomes a more nuanced and infinitely more interesting character as you progress. Some always fall a little too close to cliché for my tastes (Nil Phineus, the third and final lead that you will control during the games’ relatively lengthy adventure rarely seems to talk about anything other than household chores), but for the most part, the cast is varied and largely likeable.

What really keeps the story moving though is the central premise. It’s hardly ground-breaking, but the story of monstrous Gigants (giant monster demon things) that can only be stopped by a group of specifically skilled students Is nothing if not compelling. With the power to interact and work with Yorigami’s (strange mystical lifeforms that imbue their symbiotic partners with the ability to overcome the relentless Gigant threat), Ray Gigant’s collection of unruly heroes are perfectly suited to this bizarre but carefully crafted sci-fi fantasy yarn.

Working from a base of operations named Outer Academy, these Kamibitos (the students selected to defend the human race), embark on an ongoing battle that takes in three separate storylines. While the three stories range in quality with the initial move from one story to another proving at occasionally jarring, there is something to be said for the kind of scope that this approach delivers with the different cast of characters allowing the game to tell the story from multiple angles and with various interpretations of the large scale events unfolding across Tokyo. 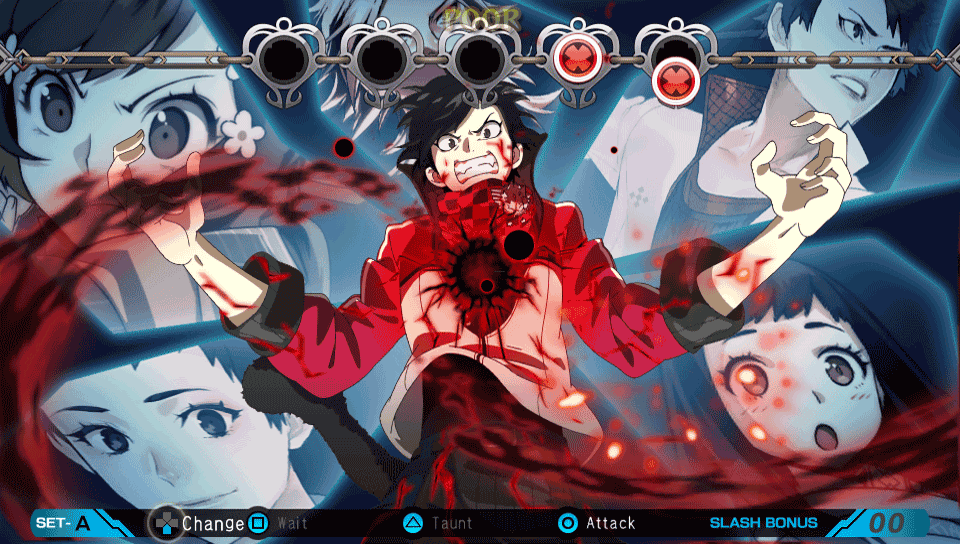 That story is delivered via often lengthy dialogue-driven cut-scenes in the form of a digital visual novel. The art design, while relatively simplistic, is clean and crisp with the Vita’s much celebrated widescreen display doing a great job of bringing these otherwise largely stationary screens to life.

The battles themselves, despite only having a handful of limited animations, looks absolutely stunning. Like a high production anime come to life, these battles, despite being somewhat limited in scope, are delivered with a visual flair that genuinely jumps off the screen.

Sadly, the same can’t be said of the dungeons. Like Experience Inc.’s previous games, the dungeons themselves are all disappointingly bland. They’re functional and far from ugly, but they lack character and offer little in the way of memorable locations. Latter dungeons do deliver a handful of puzzles and traps to contend with, but for the most part, they are little more than serviceable, and with neither the battles nor the dungeons offering much in the way of challenge or notable diversions (there are no side missions at all), seasoned dungeon crawlers might find the game a little too straightforward.

Saying that, while Ray Gigant offers little in the way of challenge (especially compared to some of the more notoriously unforgiving Dungeon Crawlers out there), it still delivers an extremely enjoyable experience, one that puts story ahead of grinding while also providing a relatively unique set of mechanics and concepts.

Beyond the emphasis on storytelling, the battle system, despite appearing initially simplistic, is actually home to quite a few clever twists on the more traditional mechanics that drive the combat. The turn based battle system will be immediately familiar to anyone who has played a JRPG in the past 30 or so years, but the use of Action Points (AP), make for a uniquely tactical affair. Despite the option for up to 5 moves per round, with AP only built up via enemy moves and use of the ‘wait’ ability, blowing your load (so to speak), can leave you extremely vulnerable if the battle drags on past the first few rounds. 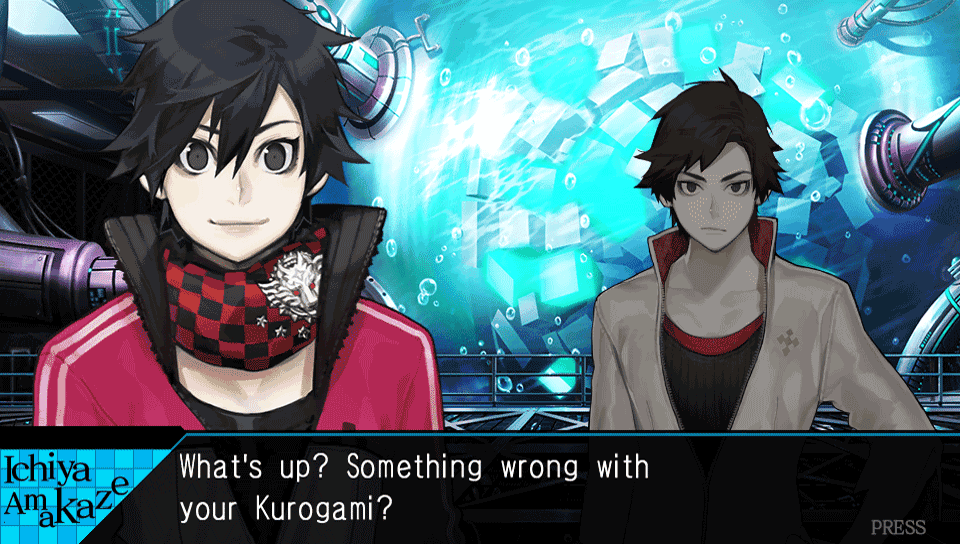 This is especially prevalent in the brilliant boss battles that not only look great thanks to the multiple viewpoints offered by each member of your team, but also require a more nuanced approach to battle thanks in part to the extended length of the encounter and the disappointingly underused Slash Beats Mode (SBM). Once built up, this mode begins a simplistic rhythm mini-game that, if pulled off accurately, allows you to unleash an extremely powerful special attack. This mode could certainly do with a little more depth and the concept is arguably under-utilised, but the idea is a sound one and certainly adds to the already enjoyable core combat.

Rather than the traditional shops and upgradeable XP, Ray Gigant decides to go a different route with no shops, no side quests and no XP derived from battle. Instead, character development is dealt with via a skill tree that is upgraded via dropped resources and new abilities and attacks that are gained via dropped weaponry. Like much of the game, it’s a very streamlined system, one that some fans of the genre might find too simplistic, but as a refreshing change of pace, this decidedly sleek upgrade system works incredibly well.

Yes, the dungeons are undoubtedly bland and, by genre standards, there is no getting around the fact that, Ray Gigant is relatively easy, but if you’re looking for a more story driven adventure, one with great characters and fantastic production values, you won’t go far wrong with, Experience Inc.’s unique and largely successful coming together of visual novel and dungeon crawler.