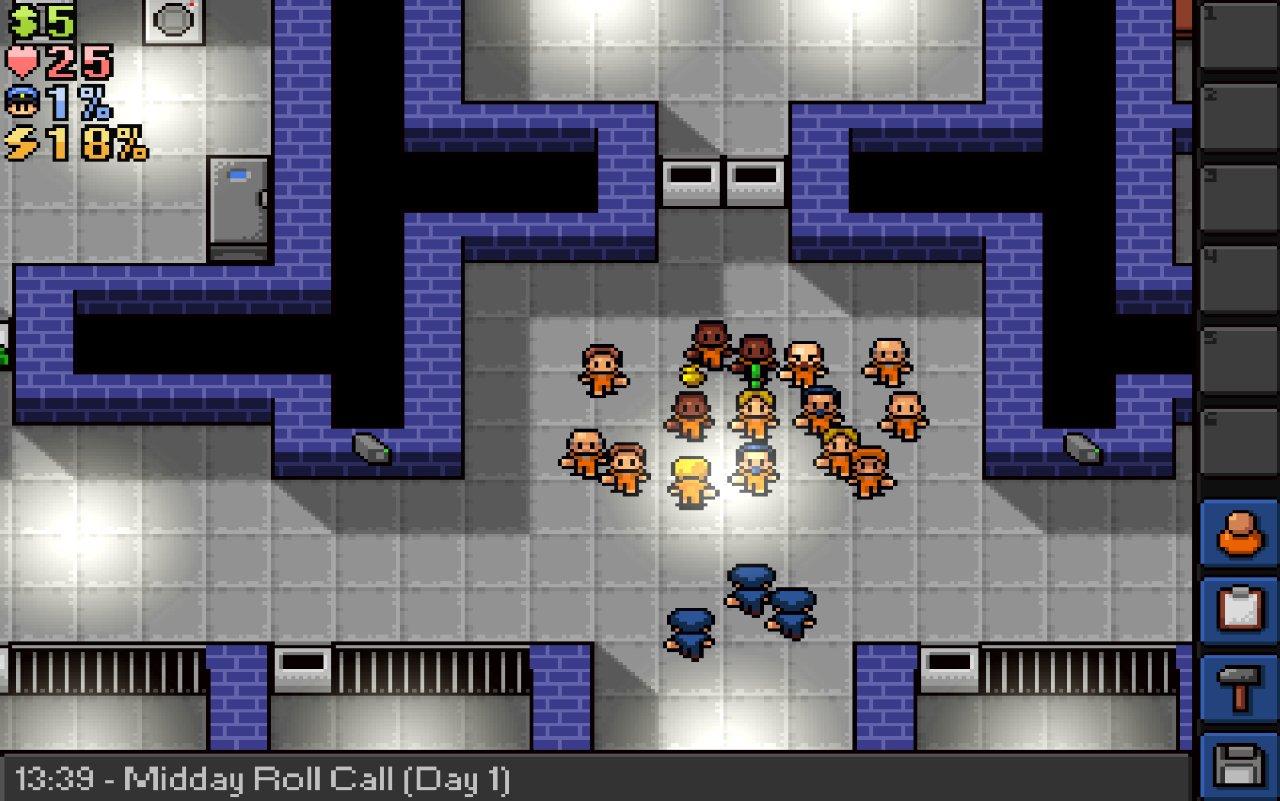 Prisons aren’t pleasant places (or so I have been led to believe) and, if I were to ever find myself on the wrong side of a prison fence, I imagine that I’d be pretty keen to do one at the first possible opportunity. Of course, ‘doing one’ from a high security prison is easier said than done, but with no chance of parole, wouldn’t you want to get the hell outta Dodge?

Well, The Escapists offers gamers the chance to practice the skills one might need if they were to ever end up in the proverbial big house. Sure, The Escapists has adorable pixel art visuals and the showers aren’t quite as harrowing as I imagine they would be in an actual prison, but with strict timetables, limited resources and an array of unique inmates and law enforcement types to interact with, Mouldy Toof and Team 17’s prison simulator proves far more tense and nuanced than its art design might initially suggest.

With a collection of increasing complex prisons to escape from, The Escapists offers an almost overwhelming number of ways to escape from your current incarceration. You can actually escape the first prison relatively quickly via a well-timed attack on an unsuspecting guard, but if you want to take the more tactical route, there is also an array of long winded, decidedly elaborate approaches for those looking to vanish without a trace. Of course, a sneaky attack at one of the high security prisons is likely to be followed by a much needed trip to the infirmary, but right from the off, The Escapists leaves the experience to the gamer. It’s a brave choice and one that will certainly serve you well during your attempted escape of the more complex, high-end penitentiaries later in the game, but equally, it also means a steep learning curve for those unwilling to take the time to learn the games’ unique systems and daily patterns. 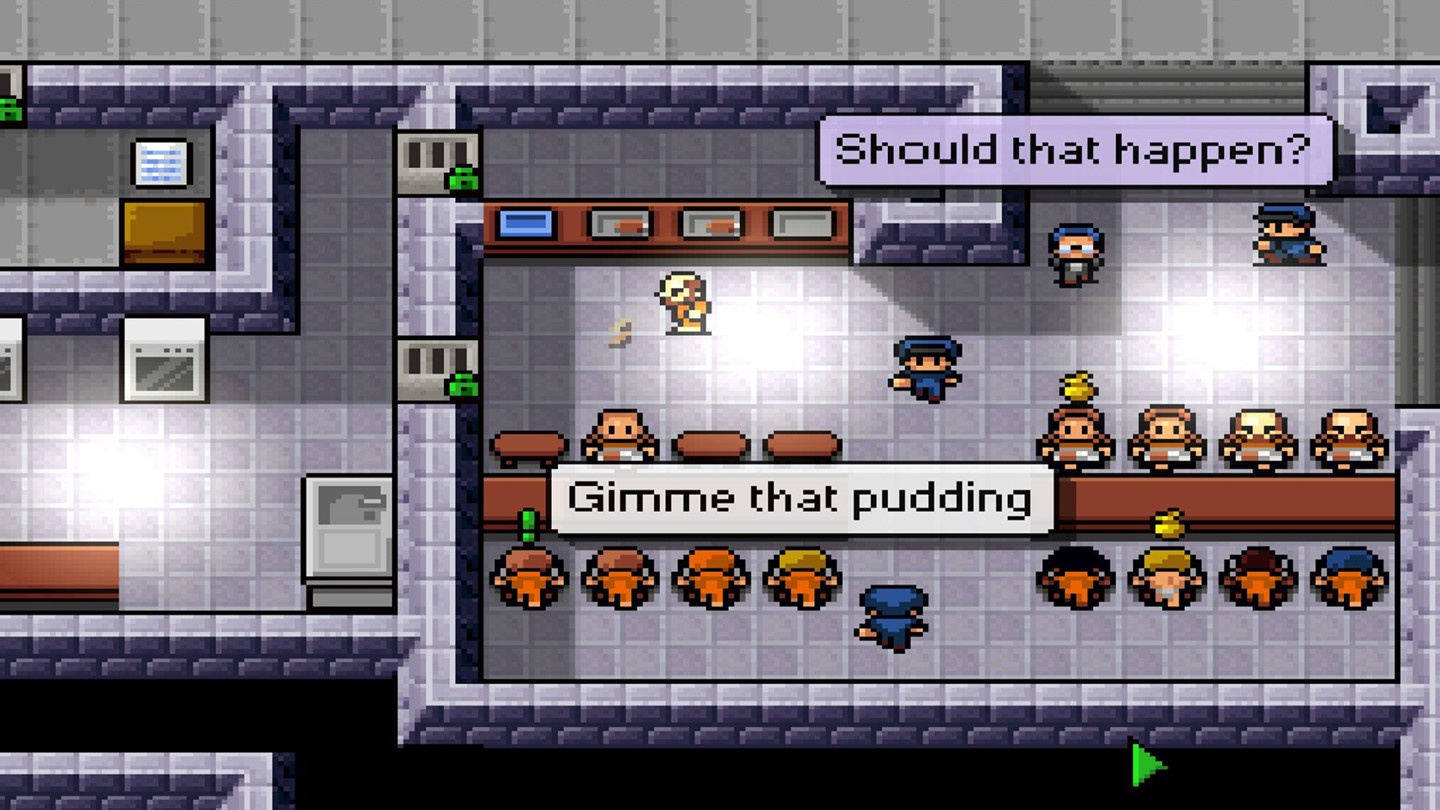 Some gamers will undoubtedly love the freeform gameplay and the lack of hand holding, but for someone like me with such a shocking lack of patience, those first few hours did inch dangerously close to frustration at times. There are plenty of items than can be made via the games’ simplistic crafting system, but those available are not outlined in the game, thus relegating the system (at first at least), in to a tiresome game of trial and error. Don’t get me wrong, it all comes together eventually and you’ll wonder what the fuss is about a few hours later, but be warned, patience is certainly required.

In fact, patience is required throughout. Try to storm through this game and you’ll get nowhere. Sure, you might get a lucky escape on the first few prisons, but when you end invariably end up at one of the hardcore slammers, any attempt to rough house your way to freedom will see you mercilessly thrown back to square one time and again. The Escapists is about watching your surroundings, finding patters and befriending those who might be able (and willing) to aid in your escape. Rough up the wrong guy, leave your equipment in an unsafe place, miss breakfast or go walkabout during work out time, and folk are going to get suspicious. Heck, the other inmates might even rat you out, and then, well, that’s your plan down the shitter. Items gone, back in your bunk, The Escapists, like prison, can be really rather brutal. Like I said, The Escapists is all about patience.

Due to my own aforementioned lack of patience, I found the game somewhat trying at times, but I’ll tell you this much, that’s my shortcoming rather than the games’. The Escapists is a fantastically unique experience, but to get the best from it (and to have any chance of success) you’ll have to be willing to play by its rules. Yes, Mouldy Toof have given you the options and ability to approach the game in a myriad of ways with escape achievable via numerous unique avenues, but while this game about being locked up quite ironically provides a huge sense of freedom, success in its open world requires a level of commitment that some gamers will be unwilling to provide. From keeping up your part time jobs, completing errands for other inmates and making sure you’re in the right place at the right time, The Escapists is as much about following the rules as it is about breaking them. 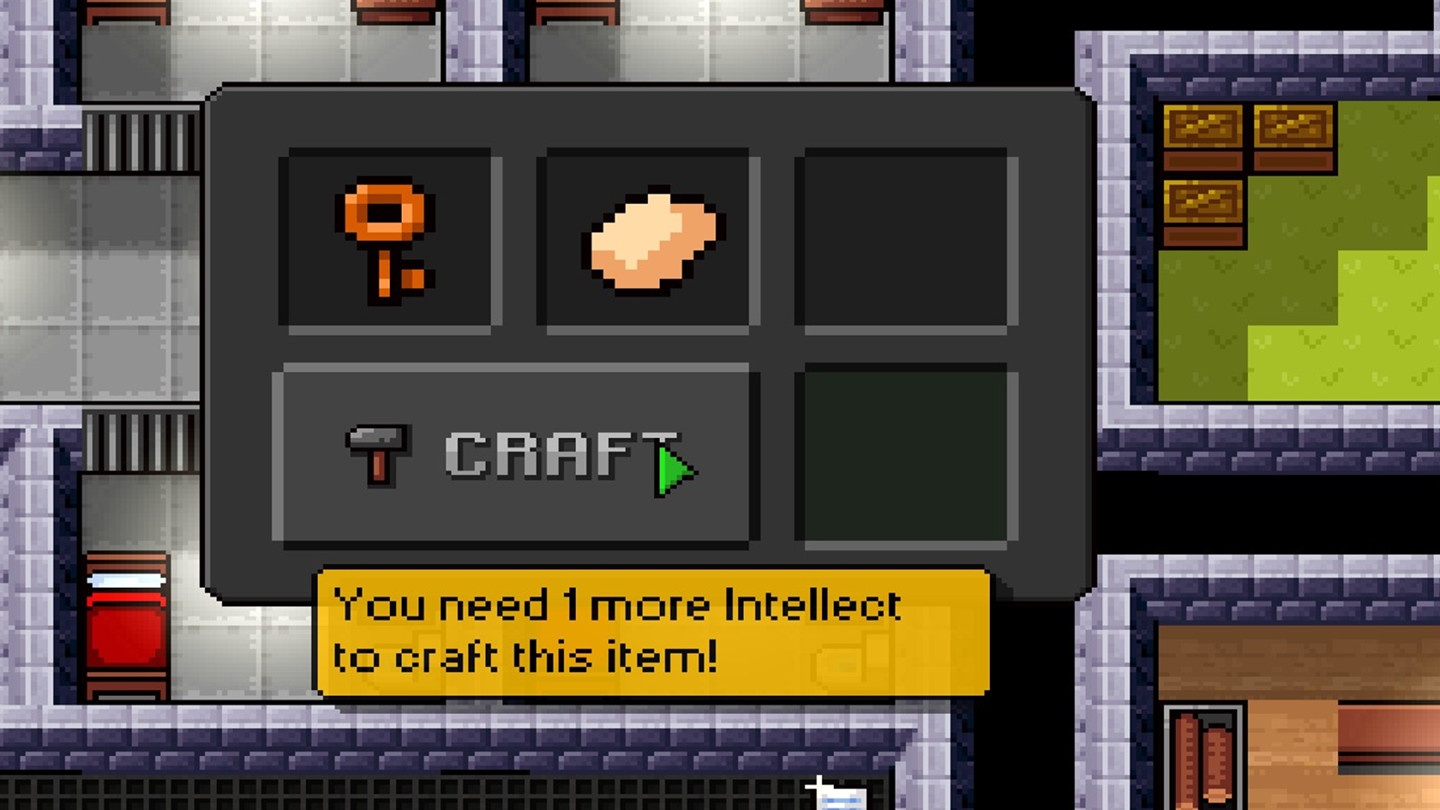 With its glorious pixel art visuals, cool snippets of dialogue and great soundtrack, you’d be forgiven for believing that The Escapists is a simplistic, casual gaming experience, but believe me, looks can be decidedly deceiving. Yes, the true horrors of prison life aren’t dealt with in this game (and rightly so), but make no mistake, this is a challenging, often unforgiving experience.

Having a carefully planned escape completely blown due to one minor error can be hugely frustrating, but equally, when that carefully constructed escape plan comes to fruition, the sense of accomplishment and achievement is almost palpable. It’s risk vs. reward in its purest form and The Escapists nails that aspect of gameplay like few other out there. Patience is certainly required to get the best from its slow burn gameplay, but if you’re looking for a carefully constructed, thoughtful and above all else, unique gaming experience, The Escapists might well be the game for you.