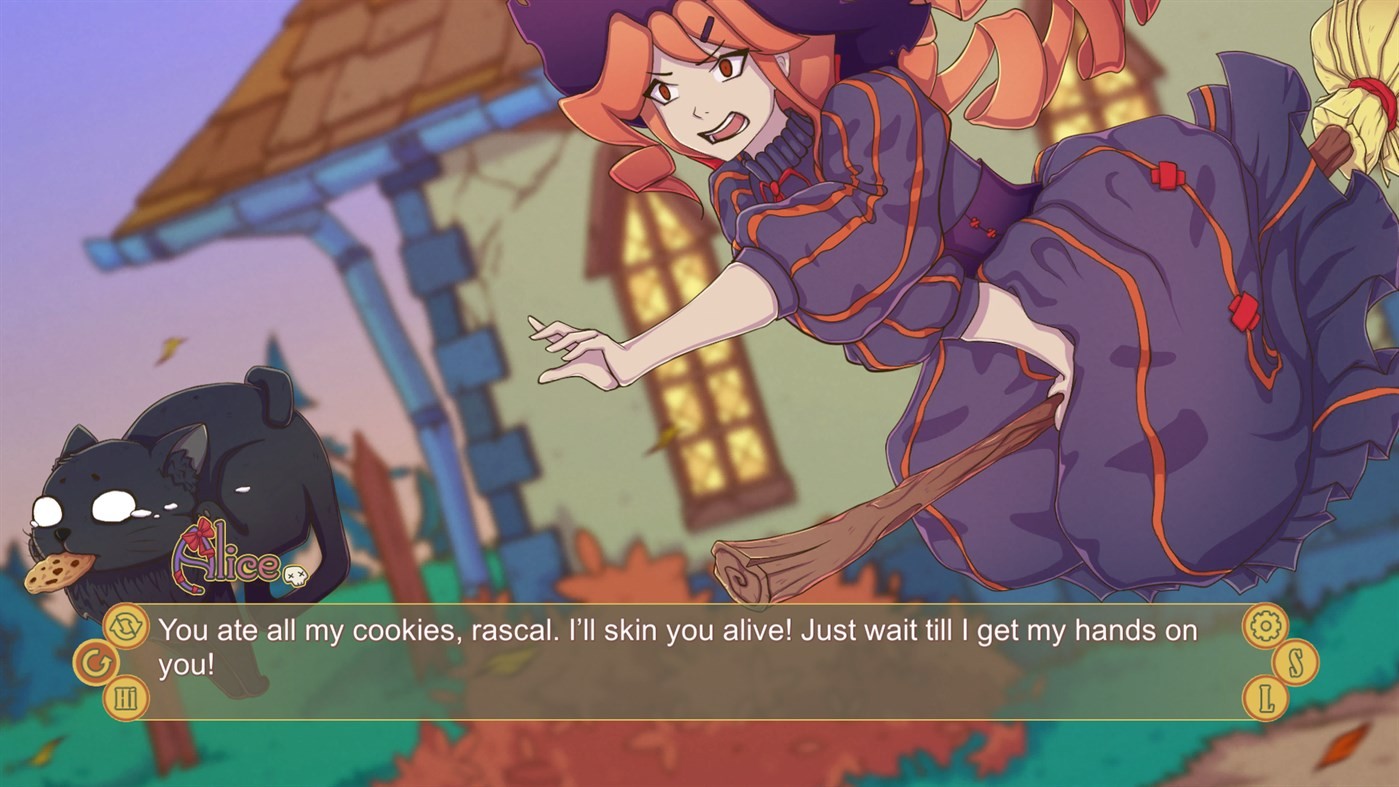 Regardless of your age, I think there’s still room for a good fairy tale. I always appreciated the stories of witches and sorcerers, and the magical world in which they live. The fantasy setting lets the author create whatever his heart desires, and some of the most memorable characters in literature have been created through this genre. When I was offered the opportunity to play/read my latest review title, I was a little reserved. I’m sure that if you follow my review articles, you know that I’m a fan of reading, and I like the Visual Novel VN genre, so it wasn’t that, that made me think twice about the title, no, it was the childish and colourful design of the cover art that put me off. My Aunt is a Witch is a vivid and cute visual novel that was developed by Graven Visual Novels, and published by Sometimes You. At first glance, it looks like it will be a simple, bright and playful children’s story (not exactly how I wanted to spend my evenings), but in reality, it is a fantasy tale with dark humour, big characters and a captivating storyline.

My Aunt is a Witch utilises a classic fairy tale opener of the wicked step-mother, and her hatred of her step-children. The child’s biological father is convinced to discard his own flesh and blood, and the boy is sent far away to a tiny hamlet to live with his aunt. Sounds pretty harsh, right? But once he arrives, he realises that not everything is as it seems, and those memories of his childhood, and this magical house weren’t just in his imagination, but it was all real. His life is about to take a turn for the better, as he steps both feet into the realms of magic and potions. Thomas is the boy that has been sent far from home to live with his aunt Alice. Alice is a kind-hearted witch who practises “White Magic”, but she has a fiery temper. She is protective of her nephew and will protect him at all costs. The story takes you on a trip of discovery across several areas of her magical world. Alice is a brilliant witch, but she cannot find an apprentice to pass her knowledge onto, that is, until Thomas steps up and offers to become a potion maker. Little does Thomas know how dangerous this new life will be, and he must watch what he does at every step and turn. 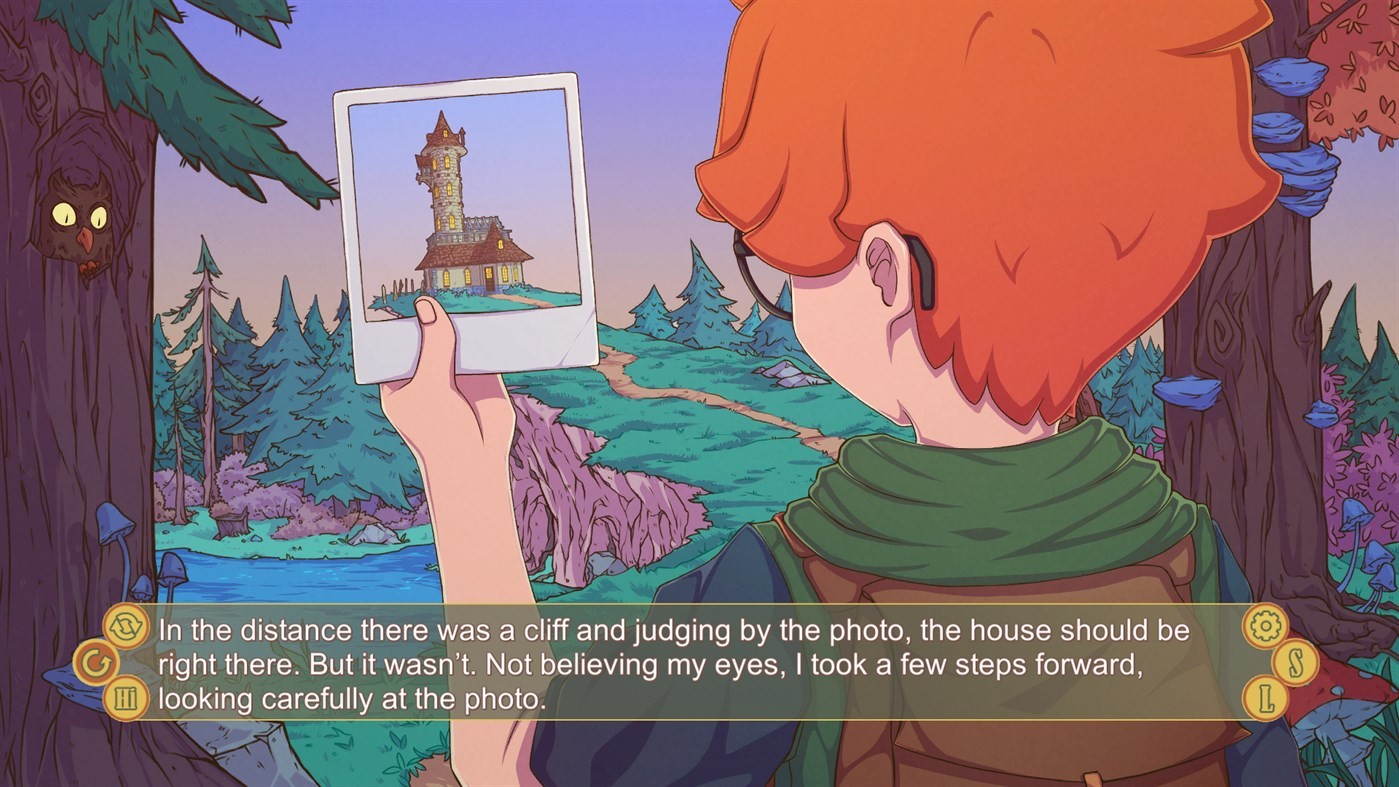 Thomas soon discovers that the house that he now resides isn’t exactly safe for little boys, and he spends his time being guided by a talking cat (he is Alice’s ex boyfriends), hats that are alive, and a knowledgeable tree that travels in your backpack. The whole premise is absurd, unrealistic, but absolutely brilliant. The tone and pace at which the plot is delivered keeps you wanting to read, I couldn’t put it down and completed my first run through in one sitting. What I particularly enjoyed about this VN was the combination of several genres; Point and Click, puzzle mini-games, and the decision making of a Visual Novel. The 3 elements combined made for an enthralling and engrossing title that transported you to the fantasy setting.

The main premise of the game is to complete tasks for your Aunt Alice. You are asked to collect ingredients for potions and then mix them together to create the desired object. Along the way you will be distracted by mini-games, spirits, and other magical items. Most of the things you encounter want to tear parts of your body off, so you have to be careful what you touch, and who you talk to. The Point and Click element is easy enough to follow. A hint button can be used at all times, and this highlights the items which you can interact with during any scene. This, combined with a book of tasks that added further guidance, made this quite easy to complete, even if there was some traversing back and forth as you found suitable items to help complete certain jobs. The mini-games were just as simple to complete. A combination of arrows appeared on the screen, and you had to follow the pattern within a set time frame. The only time I failed was when I wanted to unlock an achievement, other than that, you won’t struggle at all. The decision making, was probably the toughest part of the game, not because there were many options, no, if you chose the wrong thing, then it was game over, and you had to start at the last save point, or the beginning again. I fell for this once before I saved the game regularly.

As with most VNs, this one has beautiful, unique art that helps to set the tone, and transport you to the world that you are exploring. You spend most of your time reading through the story, listening to the music, and observing the characters’ changing expressions. The imagery is displayed in a stationary manner, and all movement is shown by the characters fading in and out of the shot. Movement from scene to scene is performed by selecting arrows, and though the change of scenery is smooth, it isn’t seamless, so don’t go expecting Hollywood effects. As I said at the beginning, the beauty of the fantasy genre is the authors’ freedom to create anything that they wish, Graven Visual Novels have done exactly this; Colourful and twisted landscapes, giant toys that hunt you down, banshees that wish to rip your face off, the list goes on. It’s a fantastic world to explore, and the vivid tones and sharp lines make it very easy to observe. The cartoon style and font used for the text worked with the theme perfectly.

A whimsical and lighthearted plot needed an audio to match, and fortunately this happened. The music that accompanies the whole game is absolutely brilliant. Folksy tunes play out in the background as you explore and listen to your aunty talking. This then changes whenever there is danger, or a high energy moment. The upbeat and ominous music sets the scene, and sucks you into the action without you even knowing. You know that the developers have got it just right when you can feel your heartbeat getting faster as you start speed reading through the story, desperately trying to find out what happens. The awesome music was then supported with great sound effects. The crashing sounds of spells, the smashing of items as a clumsy cat knocks into them, the marching sound of feet, and the ambient noises of the surrounding people, everything was alive, the fantasy setting was vivid, and was one of the best examples of the genre. 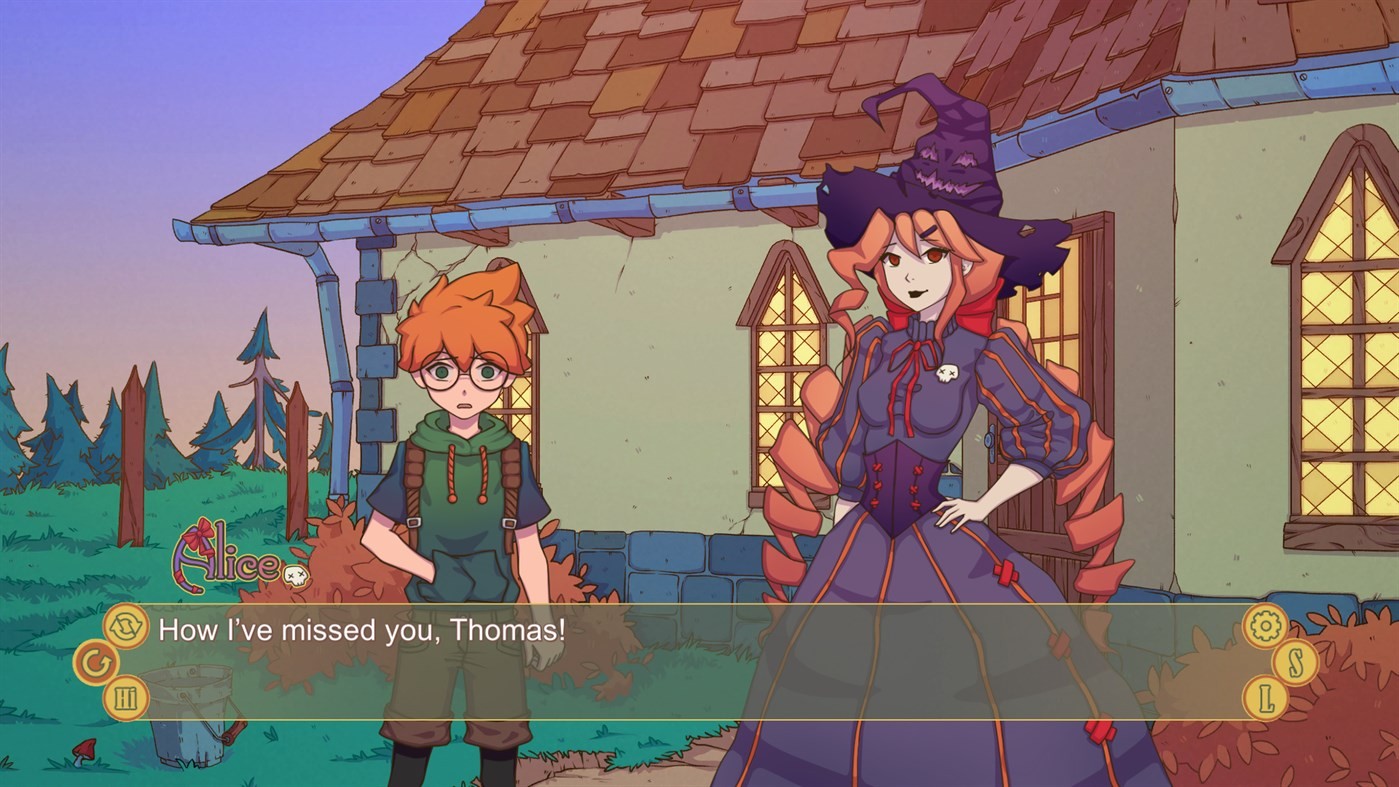 This VN required more controller use than most, but again the developers got this spot on. It was easy to navigate the world around you, and it was simple to select items. The cursor was perhaps a little too sensitive, and I would imagine that it would be easier to use a mouse and keyboard. With a little practise you soon forgot about the sensitivity, and became immersed in the plot again.

When I read a book, I rarely return to read it again. This isn’t because I didn’t like it, it’s because part of the draw for me is the not knowing what will happen. This is the same with VNs, once I’ve completed one, I only return to finish any additional achievements that I have missed. Though it doesn’t have much replay value, you will need to set aside around 5 hours to complete one run, and there are 18 achievements to unlock which require a minimum of 2 attempts to unlock them.

As you can probably tell by the tone of this review, I loved this game. The art style, audio, characters, and absurd plot had me hooked from the start. The developers avoided the usual traps of creating an over sexualised lead female character who spends most of her time parading around in her underwear or a bikini. I’m not averse to seeing this in a game, it was nice to not have it thrust in my face for 90% of my playing time. My Aunt is a Witch isn’t perfect, and you will have to ignore some bizarre typo’s, such as always referring to his aunt as “The Aunt“, but I forgave these mistakes as I assume it has been translated to English, rather than written directly for an English audience. Do I recommend you play this? Of course I do. Can you make Thomas the best apprentice in the land? Remember to follow all instructions and touch nothing.

My Aunt is a Witch Review

A story about family, magic, and talking cats. Can you become the best apprentice around? Follow the advice, and touch nothing.