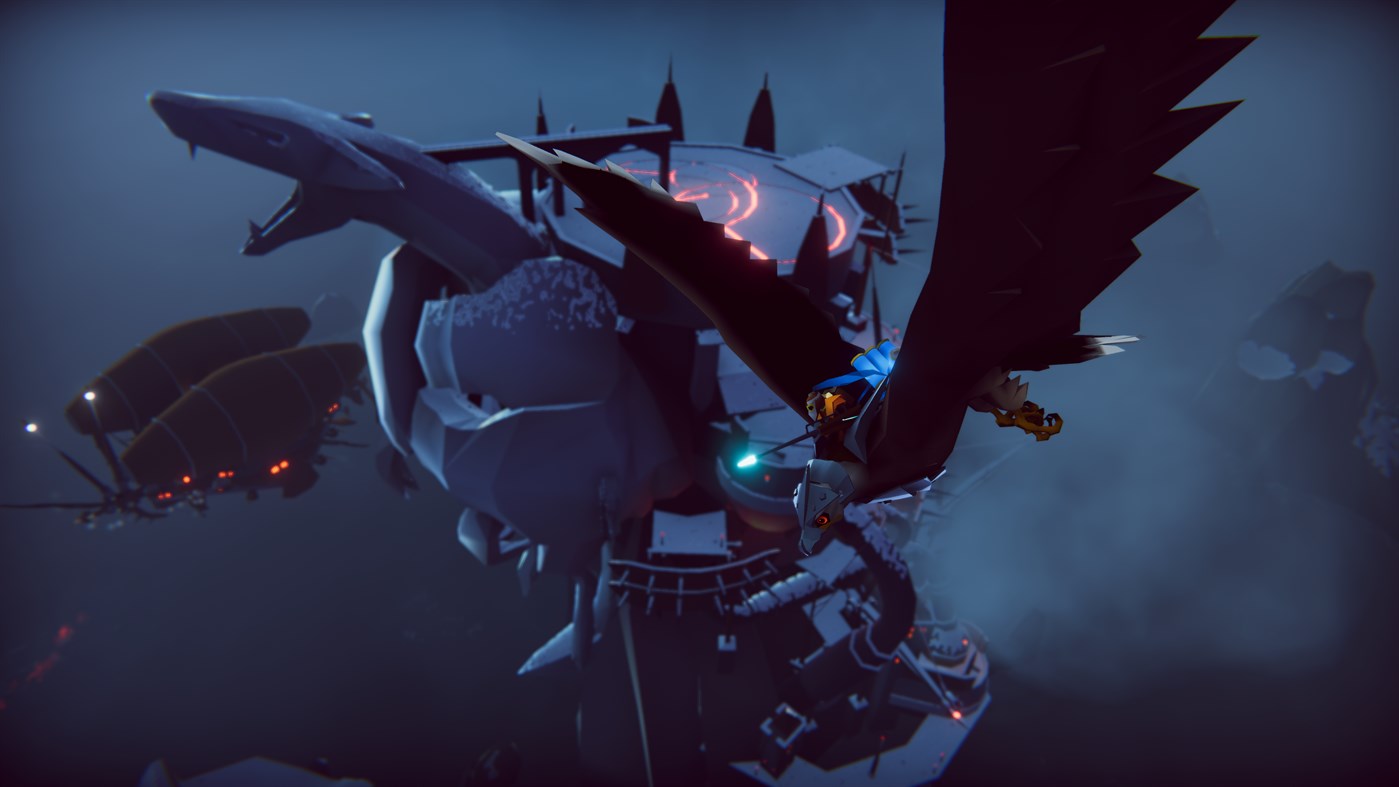 When I hear that a game has had a single man at the helm of its creation, my mind instantly thinks of simple indie titles that are great in concept, but lack any depth. Not that a basic game doesn’t take a lot of work, but anything more, and I’d expect a full team of dedicated gaming professionals to be working on it. I was shocked when I heard that my latest review game The Falconeer comes from the creative genius of just one man Tomas Sala. What makes it more impressive is that this massive open world title has been released to support the much anticipated launch of the Microsoft Xbox Series X/S and is optimised to use most of the power available and supports the 120 fps.

Published by Wired Productions you are tasked with taking to the skies on the back of a giant Falcon. The vast world that you explore is beautiful, sparse, and laced with political turmoil. If you could imagine HBO’s Game of Thrones set in Kevin Reynolds Waterworld, then you won’t be far off the gaming landscape that you can explore. You take control of a mercenary who has no affiliation with any of the factions they help. You do not care who is in charge, and you will do what it takes to earn money to make your life much easier. This is a good thing, as the gameplay is broken down into several chapters, and during each one you will assist a different faction as they vie for power, or to overcome one of the many issues they face.

Tomas Sala has created a beautiful world, and story for you to explore. He has given you the freedom to follow the plot with no deviation, or you have the utmost freedom to soar into the sky and venture across the ocean. Each settlement that you visit allows you to perch on one of its many roosts, where you will speak to merchants, complete time trials, and take on any available missions. And this is the first point where the brilliance of the open world around you becomes repetitive and shallow. Unfortunately, the tasks that have been created fall into a small pool. You are offered the chance to; deliver an item, take on pirates, or remove obstacles/mines, etc. The missions are fun, and a great way to earn extra coin, but after you’ve followed the same pattern of flap, hit the destination, attack enemies, and return, well, it gets mundane. 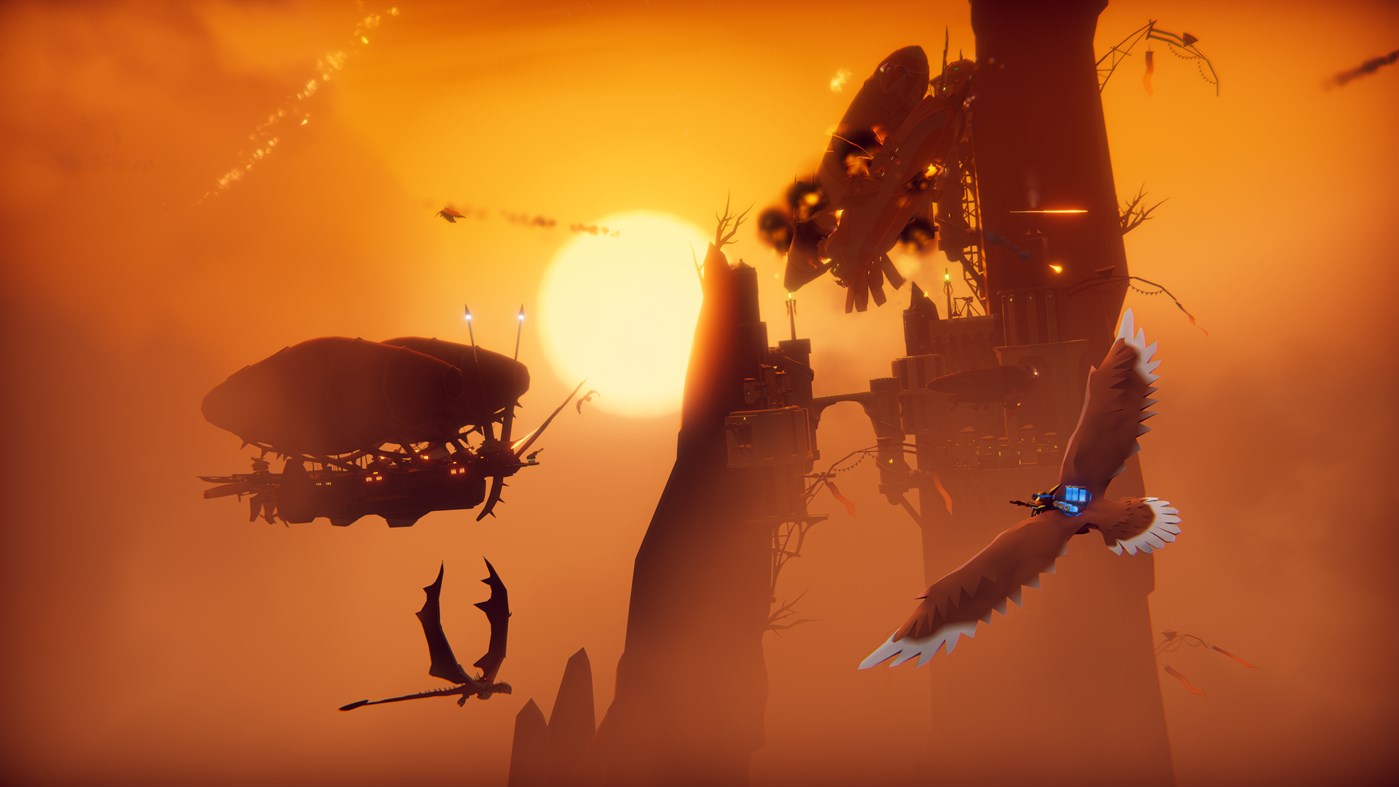 Unfortunately, this sense of repetitiveness continues throughout nearly every aspect of the game. It wasn’t helped by the expansive sections of sea that contained only waves, the occasional whale, and emptiness. The lonely experience helped to bolster the story, but as a gamer I wanted more to get my talons and beak into. If it wasn’t for such a brilliant plot, and the warm and amusing characters that you met, you’d be tempted to put this one down far too early. Moving around the map was both excellent and an arduous task, if you didn’t pay attention to the job at hand. Soaring through the world using hot vortex’s to thrust you high into the sky, and air streams to push you along was a joy, but this thrill was short-lived if you lost speed, or failed to control your bird. Letting go of the controller would allow your mount the freedom to turn at 45-degree angles, where they would move you off your preset course. Travelling from point A to B could be cut short with the ability to fast travel, but this took away from the immersive experience. Though travelling the world was slow, I wouldn’t change it, it was relaxing flapping through storms, and past jutting rocks, it still blows my mind that this was created by just one person.

You begin the game with the option of 2 preset birds, as you progress, and you complete set tasks you can purchase new shiny feathered friends. Each will have a set amount of skills, and will be better suited for different tasks. And upgrading the natural ability of your mount, you can improve its weaponry and give it super avian strength with injections that mutate it. Like with most games, these improvements come at a cost, and you will have to revisit those repetitive missions to ensure that you have the upgrades you have your eye on. So, all that grinding is worth the effort, as your bird goes from pigeon power to eagle strength in a matter of minutes.

When I hear that a game is optimised for the latest generation of consoles, I have great hope that not only will it look great, but that it plays buttery smooth. I was not disappointed! The Falconeer uses a Sea of Thieves cartoon aesthetic. The world uses a soft art style that makes all the imagery easy to look at, and pleasant on the eye. The colour palette is varied, and combines hot and cold tones to give each area a unique feel. The quite literal bird’s-eye perspective is fantastic, you have the freedom to view the world at 360 degrees, and the game takes advantage of a locking system to help you when the combat and action becomes hectic. The game is preset to run at 60 fps. As long as you have a display that will allow it, I recommend going to display settings and running it at its full potential. The Series X has enough power to deal with this demand, and it creates a fantastic experience.

Tomas Sala understands that a game isn’t just about the story, or the world around it, but also the atmosphere that supports it all. This is obvious in the attention to detail that he has placed in both the sound effects, and the music used. The latter is a mixture of relaxing soft songs, mixed with upbeat and high tempo tracks. This placed alongside the action helped to overcome the repetitive nature of several aspects of this title. The battles were a little mad by themselves, but when you add in an adrenaline pumping soundtrack, then you really get lost in the moment. The sound effects were equally impressive, though not so unique. The squawking of the bird, and the rasping sound of your weapon as it fired were as expected. What stood out for me was the voice-over work. The dialogue was great; it added humour and character to the game, and helped to support the story. 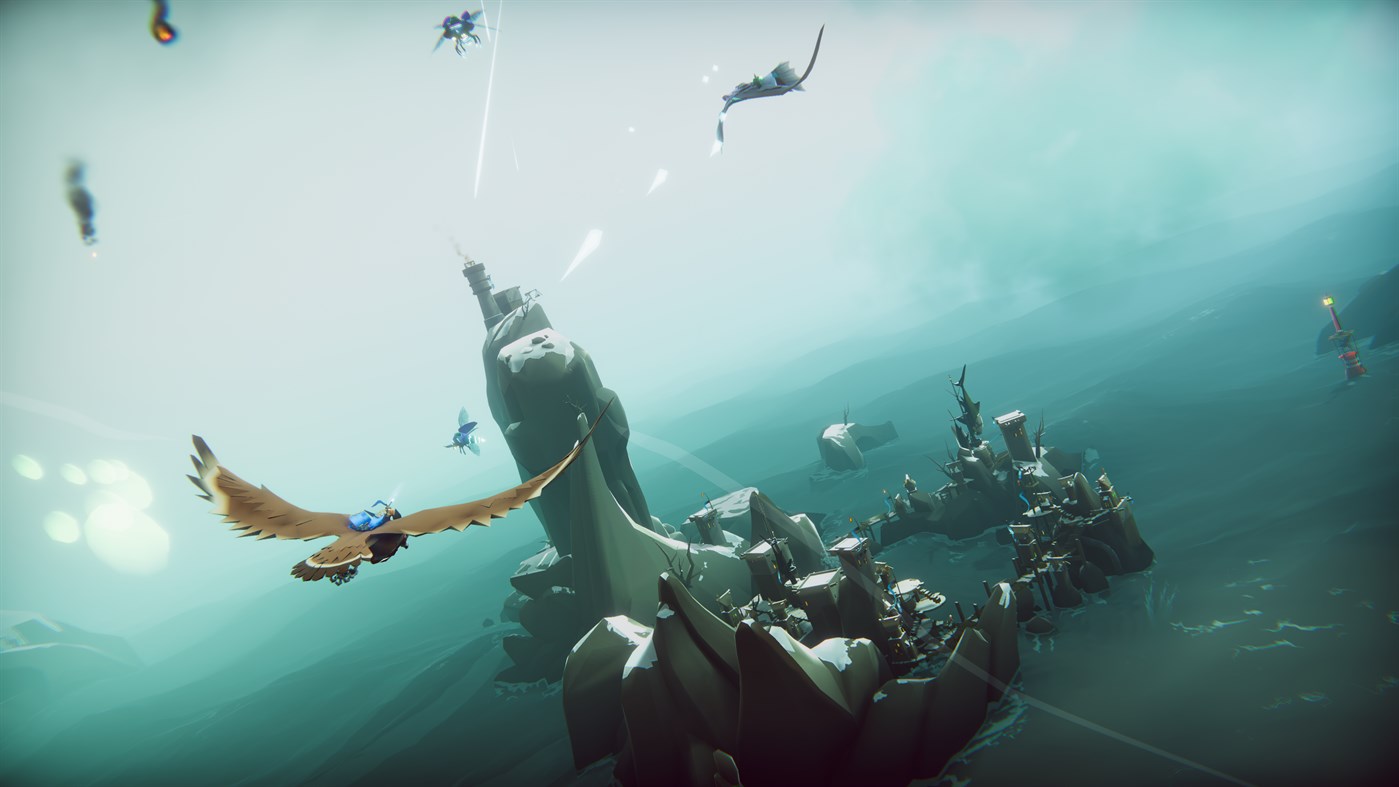 I’m not usually a fan of games that enforce a trial-and-error system so you can learn its basic mechanics. I prefer an in-depth tutorial that highlights all the key points and then allows you to take on a few tasks that have no impact to the story. The Falconeer’s tutorial can only be described as light on the ground. You are given a brief description of how to control your bird, and not much else. Many of the key game mechanics are overlooked, and this forces you to follow my much hated method of trial and error. Now I have to say, it doesn’t take long to understand how it all works, and I know many people hate death by tutorial, but I want to know what I’m doing before the game starts. Once you understand what you are doing, the controls are straightforward to use. It’s a little clumsy, and I pressed the wrong button repeatedly, but once you get into the swing of things, there is very little to worry about, even when you are being shot at from several angles.

Now, I have mentioned many times about the repetitive nature of the game (ironically so much so I’m repeating myself), so does this title have much replay value, or once you’ve played it, will you put it down for good? Well, with 10 hours of story to get your beak into, many side quests, and a large map to explore, there is something for everyone. The time trials allow you some competition with yourself, and you are free to take them on as many times as you fancy. A reasonable sized achievement list awaits if you are so inclined, and this demands you explore every part of the map to gain that 100% status. I think the open world element allows players the ability to return as much as they see fit, but will there be much to do once you’ve finished the game? Probably not, I hope that more DLC is being worked on ensuring that we are inspired to revisit this vast world.

I can’t heap enough praise on this developer for what he has achieved. The game is a masterpiece, especially when you think of how many people normally work on AAA rated titles. If you play this, you will experience a beautiful world, that is deep in lore, raged by war, and as colourful as anything that you will find in George R. R. Martin’s Game of Thrones. This great environment comes at a cost though, and that is a variety of gameplay. This is where I believe a bigger team would have helped to push this game to the next level. If more content could be added, and DLC implemented, then I believe that this will be a game to rival some of the major names that will be released in the not so distant future. Do I recommend you play this? Unsurprisingly, yes! Grab your bird and earn some coin. War may be coming to the world you live in, but when you are on no-one’s side, the only winner is you.

Birds, war, and vast waters await you in this open world title. Can you help each faction overcome their problems?