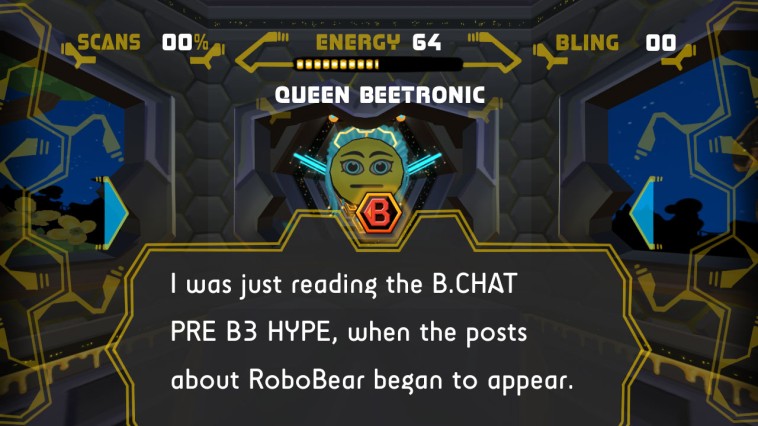 B3 Game Expo For Bees is a unique game, unlike any other I’ve played before. The basic plot of the game parodies E3, the renowned electronics event where the biggest gaming companies reveal their newest hardware and software. In this game, Security Bee must save B3 from the mysterious Robo Bear. I won’t discuss every single plot detail, as I would recommend you experience it for yourself. The plot is not very complex, and is not incredibly important to the gameplay. Nonetheless, the plot and dialogue adds moments of humor which overall improve the game experience.

The graphics, similarly to the plot, are not particularly stellar. However, the graphics are pleasing enough, and their unique style helps to create the overall feel of the game. The in-game character models give the player the feeling of a relaxing children’s game, whereas the on-screen features, even things as simple as the layout of text boxes, create an opposing feeling of your typical first-person shooter. These two visual aspects combine surprisingly well in order to create an immediate visual display which invites fans of any genre.

I can say basically the same thing in regards to the audio. The soundtrack is solid, and audio effects accurately reflect the feeling one would expect to experience at key moments in the game. In general, the upbeat music really helps to make the game more exciting. To give an idea of just how great this game is, all of these things I’ve mentioned thus far are the worst/least notable aspects of the game. Now on to the game aspects which really define what makes B3 Game Expo For Bees such a unique, exciting experience. 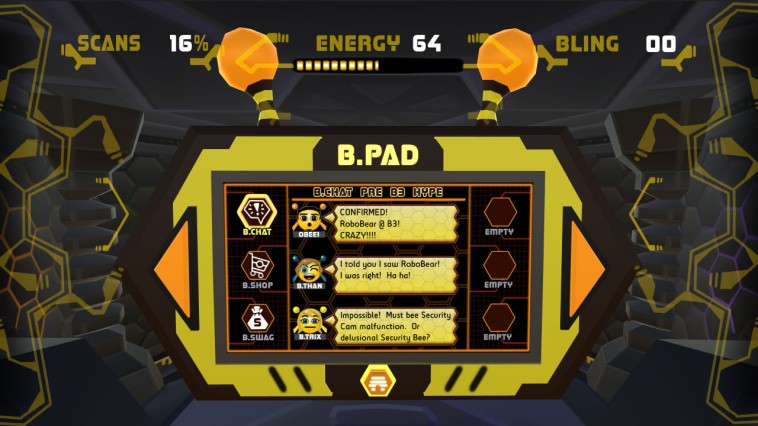 Gameplay is the factor which really makes this game such an excellent experience. Controls are smooth and easy, handling the control scheme of moving in three dimensions using both control sticks surprisingly well. Only on a few occasions did I feel as though I was struggling to control my character while trying to aim at fast-moving enemies, and even then I feel as though it would have been no issue if I was simply a bit more skilled. The FPS aspect of the game isn’t the most exciting thing in the world, but it is still fun, and easy enough for just about anyone to pick up and play.

This game features many unique gameplay components which really helps to improve the gameplay experience. The most notable of these is a music box type option which can be accessed from the GamePad (or B.PAD as the game calls it). Using it, the player can either hack into a plethora of electronic devices, which is often necessary for solving puzzles, or heal themselves, which is extremely convenient as it allows the player to heal in the middle of a battle. It appears that these two abilities have specific keys that must be pressed in order to access them, similar to the different songs from The Legend of Zelda: Ocarina of Time. I myself was not able to figure out the exact key combinations to unlock these songs every time, but I found that it was simple enough to reach just by spamming.

The world in which the game is fairly small, especially at first. However, its layout accompanies all of the other game dynamics perfectly. Secret areas can be unlocked, extending this game area at later points. From a practical perspective, it makes it easier to figure out what the next course of action is when the game doesn’t explicitly tell you, as there is less of the wrong place to be in. It also means that the save point can be readily accessed quickly, allowing players to save and quit playing in a few moments without any inconvenience. 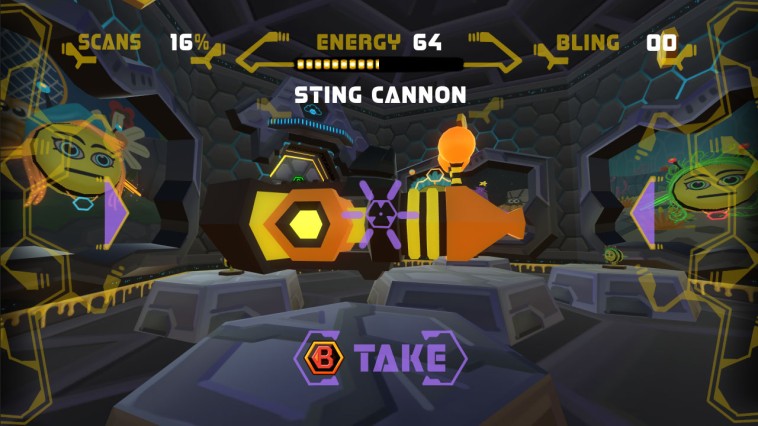 As far as strategy goes, this game is simple, yet still provides the perfect amount of challenge to remain engaging while not becoming aggravating or belaboring. Usually the player will find the solution to the puzzle long before becoming bored. Even if one takes a little longer to figure it out, simply flying throughout the B3 headquarters looking for clues can be fun and relaxing. This game also features a meter which keeps track of every item you scan, encouraging the player to interact with the environment.

Perhaps the most attractive feature about this game is its unique sense of identity. In order to match the bee theme of the game, the main interaction button is the B button rather than the A button. It’s a small touch, but it adds great depth to the game right from the start. In addition, this game seems to understand perfectly the gaming community which it mimics. The players can scroll through numerous comments in the B.CHAT to see what’s getting these gamer bees hyped going into B3. It also pokes fun at series which tend to rehash the same game over and over again by featuring two opposing companies with numerous differently titled games which all seem to be reskins of one another.

I couldn’t possibly dive into every single detail that makes this game so unique and awesome, and in many cases I can’t necessarily explain what makes this game so great. Every single gameplay component meshes together perfectly in order to create a unexplainably fun experience. Of course, I recommend that any reader give B3 Game Expo For Bees a try in order to experience first-hand those game aspects which I can’t quite put the words to.