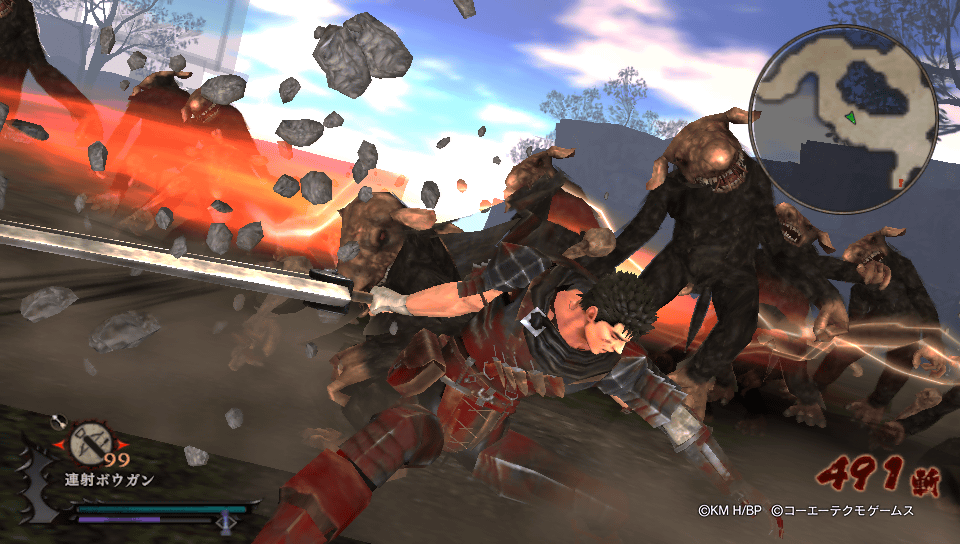 Berserk and the Band of the Hawk is a Musou game developed by Omega Force…….in some ways I feel like I could end the review right there, as for many people, that’s all they need to know. For some it’s good news, but for many (especially in the West), it’s the unmistakable sign of a repetitive button-masher that should have gone extinct some time ago.

The fact is, whatever your view on Tecmo Koei and Omega Force’s long running Musou series, Berserk and the Band of the Hawk is not going to change your mind. This is Musou by the numbers, and while the source material is undoubtedly a perfect fit for the template, there is no getting around just how familiar this game feels from a purely mechanical perspective.

Saying that, I’ve always defended Musou games – their technical proficiency and subtle depth often goes unnoticed…..problem is, Berserk is harder to defend than most. Well, I say this one, but what I really mean is the Vita version. The PS4 version is an admittedly safe but undoubtedly solid entry in the series, and while this game is built of the same DNA, the technical limitations and somewhat shoddy nature of the port make the handheld version an altogether tougher sell.

This has always been an issue with the Vita versions of this type of game, but for one reason or another, the technical limitations seem especially pronounced. The game runs reasonably well, but the huge number of enemies that make the PS4 version quite so enjoyable simply aren’t present here. The same is true of the stages – they’re just so horribly barren. It’s not like the console equivalent is a visual masterpiece, but some of the stages here really are painfully bland. Of course, a visual downgrade is to be expected when going from the PS4 to the Vita, but be warned, the version you’ll see in trailers really does hold little resemblance to the version that you’ll be experiencing on the Vita. 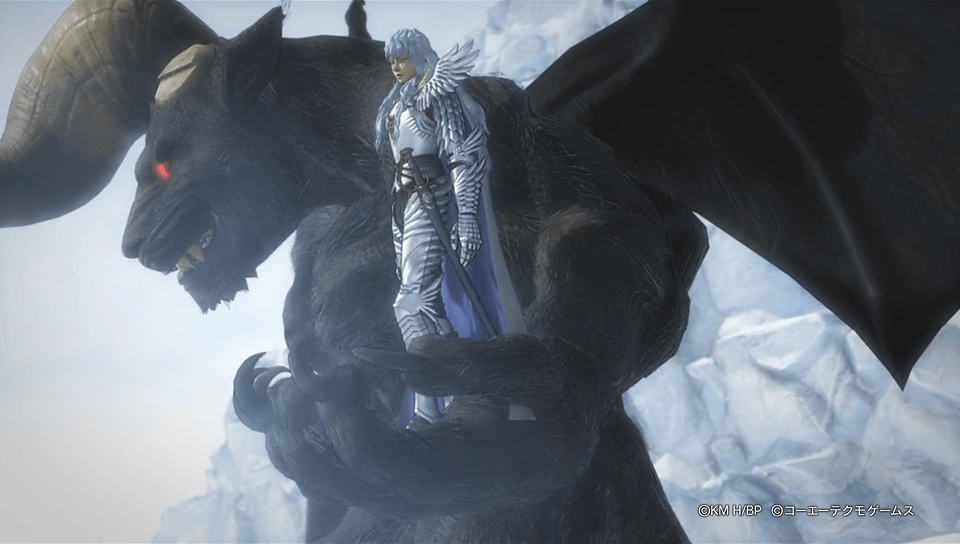 Technical issues aside though, Berserk and the Band of the Hawk remains a largely enjoyable hack ‘n’ slasher. The mechanics are solid, the gameplay relatively addictive and the story surprisingly compelling. If anything, with so much of the game proving a solid but completely predictable experience, it’s the story that proves the games’ most unique selling point. The Berserk series has been around for years, and those in the know will understand why it’s perfectly suited to the Musou template. Beyond the giant sword and bloody violence that the series is famous for, its somewhat adult oriented themes make for a pleasant and thematically fitting change of pace for a series that, despite its inherent violence, tends to lean towards the more family friendly end of the spectrum.

The core story is based largely upon Guts’ ‘Golden Age’ story arc with a bit of ‘Hawk of the Millennium Empire’ thrown in for good measure. Fans will inevitably be familiar with such famous storylines, but whether a long-standing fan or somebody new to the series, it proves a compelling narrative that is delivered largely through beautifully drawn anime cutscenes. It’s a bit uneven at times and arguably front loaded, but for as long as it lasts (which is a fair old while), Berserk’s story mode does enough to overcome the gameplays’ inherently repetitive mechanics. It’s a shame that you don’t get to swap characters more often, but with the mechanics remaining largely unchanged across all playable characters, I had no issue sticking with the more iconic Guts.

As fun as the story might be though, the vast majority of your time will be spent cutting down swathes of identikit enemies as you attempt to take control of one battlefield after another. Of course, this is where many players tune out, but honestly, these Omega Force Musou games have more depth than you might think. Crank up the difficulty, and battlefield management becomes absolutely key to success. Sure, you’re putting together relatively basic combos over and over again, but it’s all going towards taking control of key aspects of the map while essentially fire-fighting your way through the random events that pop up as you progress.

Sure, there are fort leaders and even a few boss battles, but as always, they are little more than strike sponges. You will need to employ a more defensive approach for these encounters, but when it comes to offense, very little changes. You’ll still be combing the usual combination of light and heavy attacks with a few special moves thrown in for good measure. 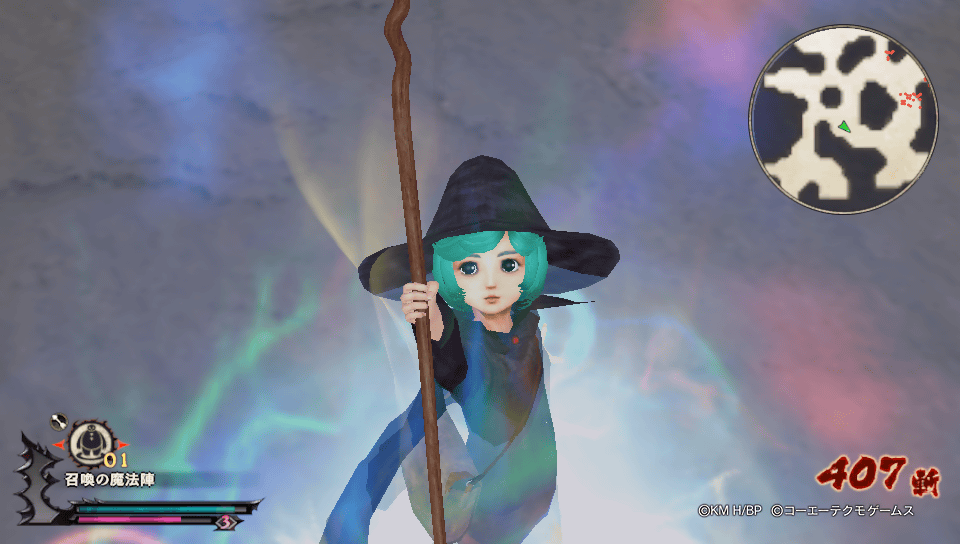 Those special attacks, which come in the form of a Ferocity Meter, can be charged up 5 times for increasingly brutal, screen clearing strikes, and while they are undoubtedly cool, like much of the game, they do feel somewhat familiar. As solid as this game might be, its biggest crime is just how safe it all feels. Yes, the story is interesting and the action is certainly brutal, but in practice, there is nothing here that you haven’t seen before. In fairness, part of that is down to the simple fact that Berserk is such a perfect fit for the most traditional of Musou templates, but after the pleasant change of style provided by the recently released, Attack on Titan, this feels like an artistic and mechanical step backwards.

In fairness, while the story mode does feel undeniably conservative (despite all the sex and violence), the Endless Eclipse mode does deliver a mechanically unique experience. A kind of Roguelike-light, Endless Eclipse has you working through floors of foes as you collect rewards before finally reaching a save point to consolidate your success. It’s a simple enough system, but with a cool selection of rewards combined with a constant fear of failure, it does deliver a different kind of challenge to the more traditional Musou gameplay modes.

Despite the technical limitations of the Vita, the familiarity of the gameplay and some rather questionable localisation, Berserk and the Band of the Hawk proves an enjoyable take on Omega Force’s ever popular Musou template. It might play it technically safe, but Berserk is a perfect fit for this type of gameplay, and to make any major changes to the format would arguably be to the detriment of the overall experience. There is nothing particularly new about any of it of course, but this remains a successful coming together for two franchises whose artistic sensibilities seem perfectly aligned.