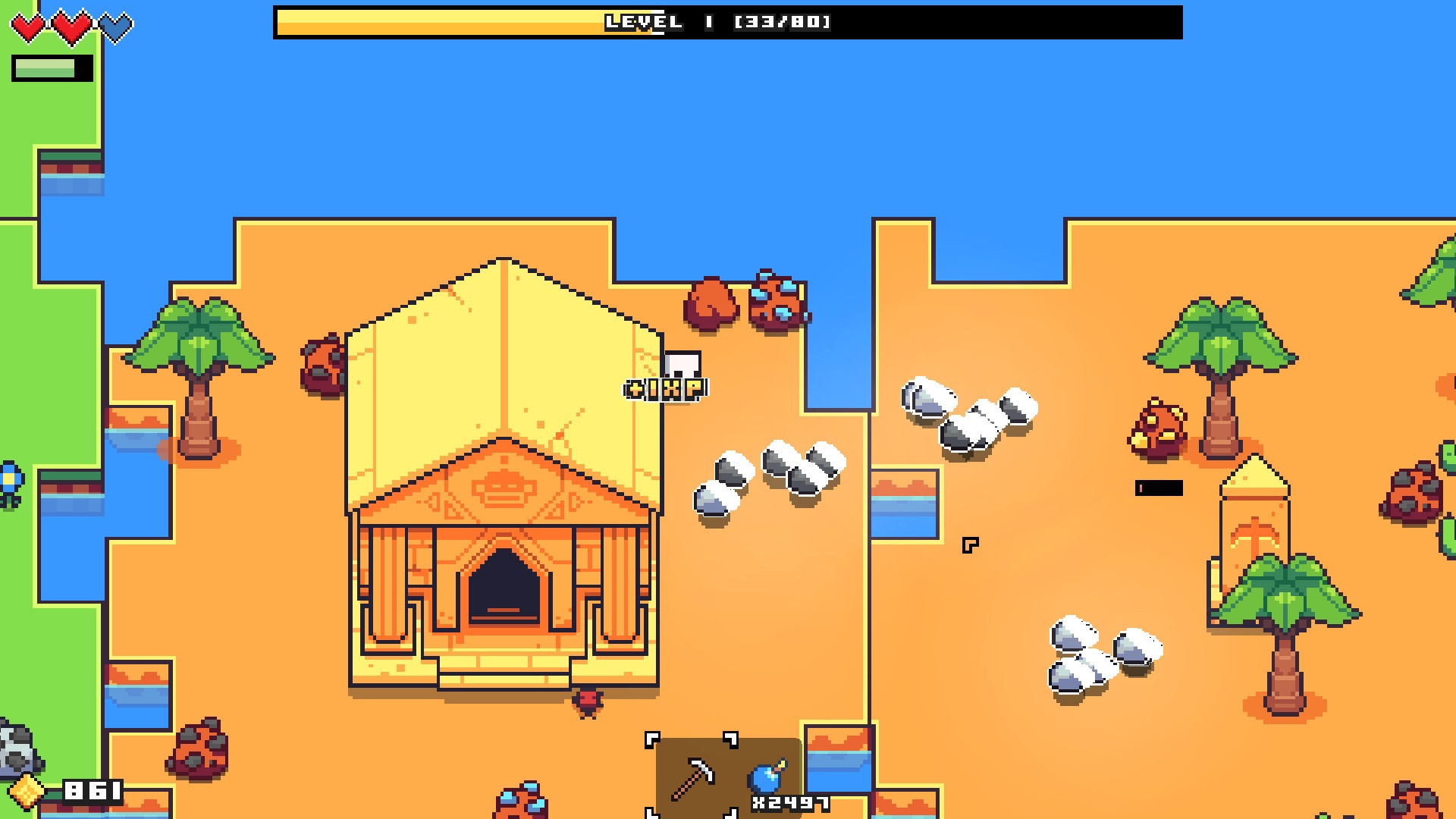 Forager is a weird one. I didn’t follow its development process prior to its release on Steam, but I knew for a fact that the game went through many testing phases, and that development was mainly supported thanks to Patreon. Personally, I must admit that I wasn’t really expecting it to be anything specific, but based on the details shown on the Steam store, I had my own fair share of interest. With that said, after almost 10 hours with the game, I just have to say that I feel like the game’s description can be a bit deceptive.

The game claims to be the “idle game that you want to actively keep playing”, but I honestly couldn’t find an idle element. Forager’s gameplay can be described very briefly, as all you do is run around collecting resources in order to unlock new things that you must then also farm in order to craft them. That is it. Still, this doesn’t happen in that specific sense, as there are other things that you can do other than chopping down trees and mining rocks. For starters, you start off with only one island, but as you gain coins, either by crafting them out of gold bars, picking them up from fallen enemies or by selling items in the market, you can purchase additional land and connect your territories by building bridges. This is one clear progression factor that you’ll strive for pretty much right from the very beginning, especially since you’ll have to manage your real estate in order to make an efficient allocation of production buildings.

As you expand your reach, you’ll gain access to new resources and biomes, but you’ll also face new creatures and be able to enter a series of dungeons. Nonetheless, while some of the dungeon designs are actually well thought out, they end up not feeling as rewarding as I would’ve hoped. They tend to have a few enemies here and there, but overall, they present you with a puzzle that you must solve in order to clear the dungeon. The puzzles themselves are what makes them worth it, the sense of accomplishment that you get when you complete them, rather than the actual rewards that come with them. 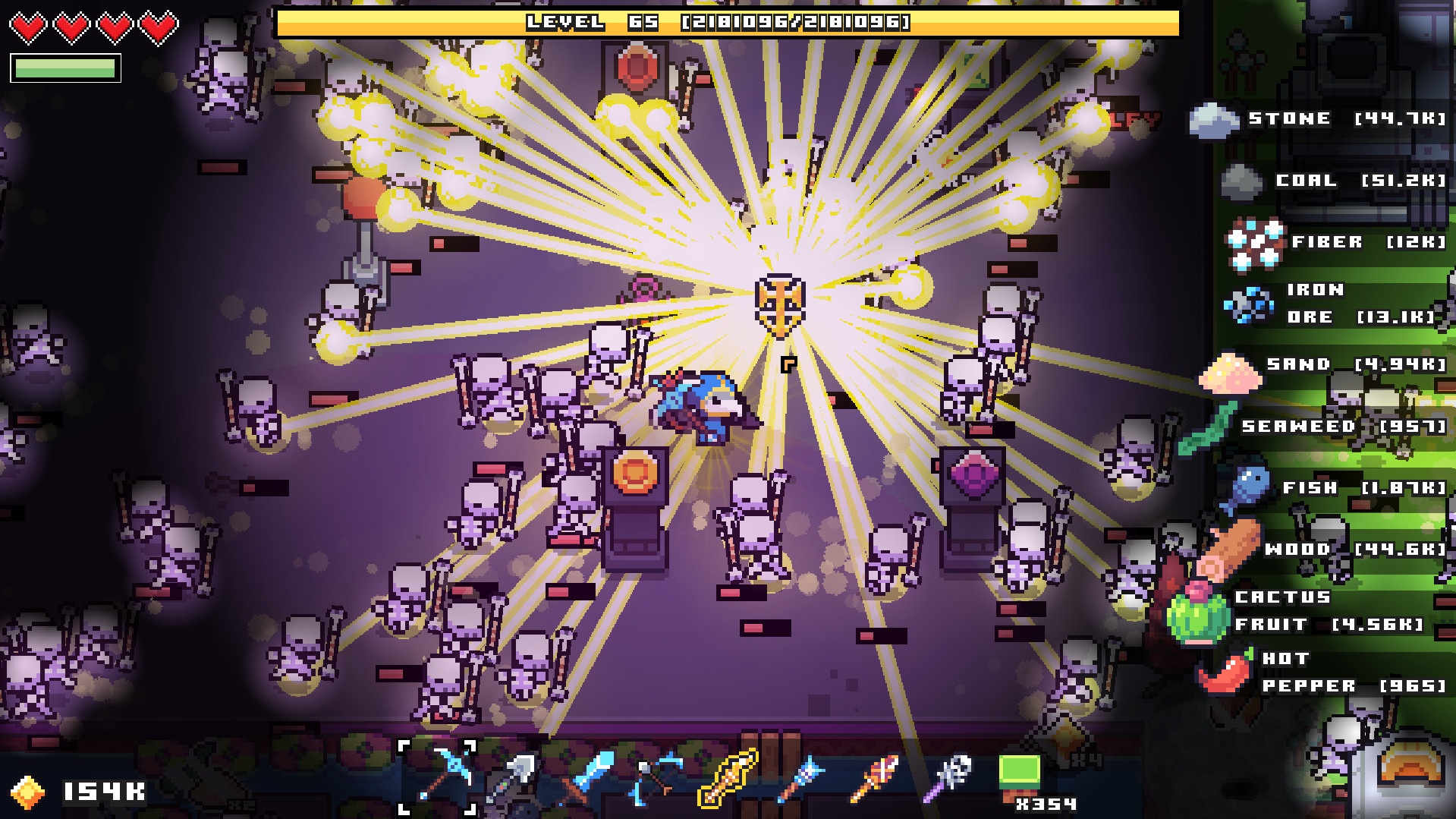 The core of Forager is all about collecting resources, processing them into other different resources and then using those to build new buildings and craft new items. The vast majority of your time in Forager is spent gathering resources, whether that be through farming, fishing, mining, chopping down trees or hunting animals and creatures. As you do these things, you’ll unlock new technologies, like potion brewing, farming, cooking, and even droids, among many others.

As you progress through the different technologies, you get access to new tools and weapons, which are pretty must just straight linear upgrades to your shovel, sword and pickaxe. Some of them have different effects, like exploding things or setting them on fire, but overall, they’re pretty much just stats boosts. So, it’s kind of like a game like Path of Exile or Diablo, you farm to get better gear, so that then you can farm even more. Still, despite its repetitive nature, I found myself spending hours on a single play session. There were times when I’d tell myself that I’d just play for fifteen more minutes and the next thing I know, it’s been an hour.

By nature, Forage is grindy and repetitive, but that isn’t necessarily a bad thing. Given that resources keep respawning, you’ll never run out of them, but unless you build a series of laser rods (which automatically destroy and gather resources for you), you’ll find resources overflowing the land, even preventing you from moving around freely. It can be quite annoying. On another note, you have an energy meter, which limits how much you can do. In order to gain back energy, you must consume food or you can lose one heart in exchange for some energy.

It’s worth noting that Forager also features combat, just in case you have forgotten or didn’t know about that. However, it’s very simple, as there is only one basic attack, so all that you have to do is hold the mouse button on the enemy while you move in order to dodge their attacks. There is no challenge in Forager whatsoever, at least as far as combat goes. 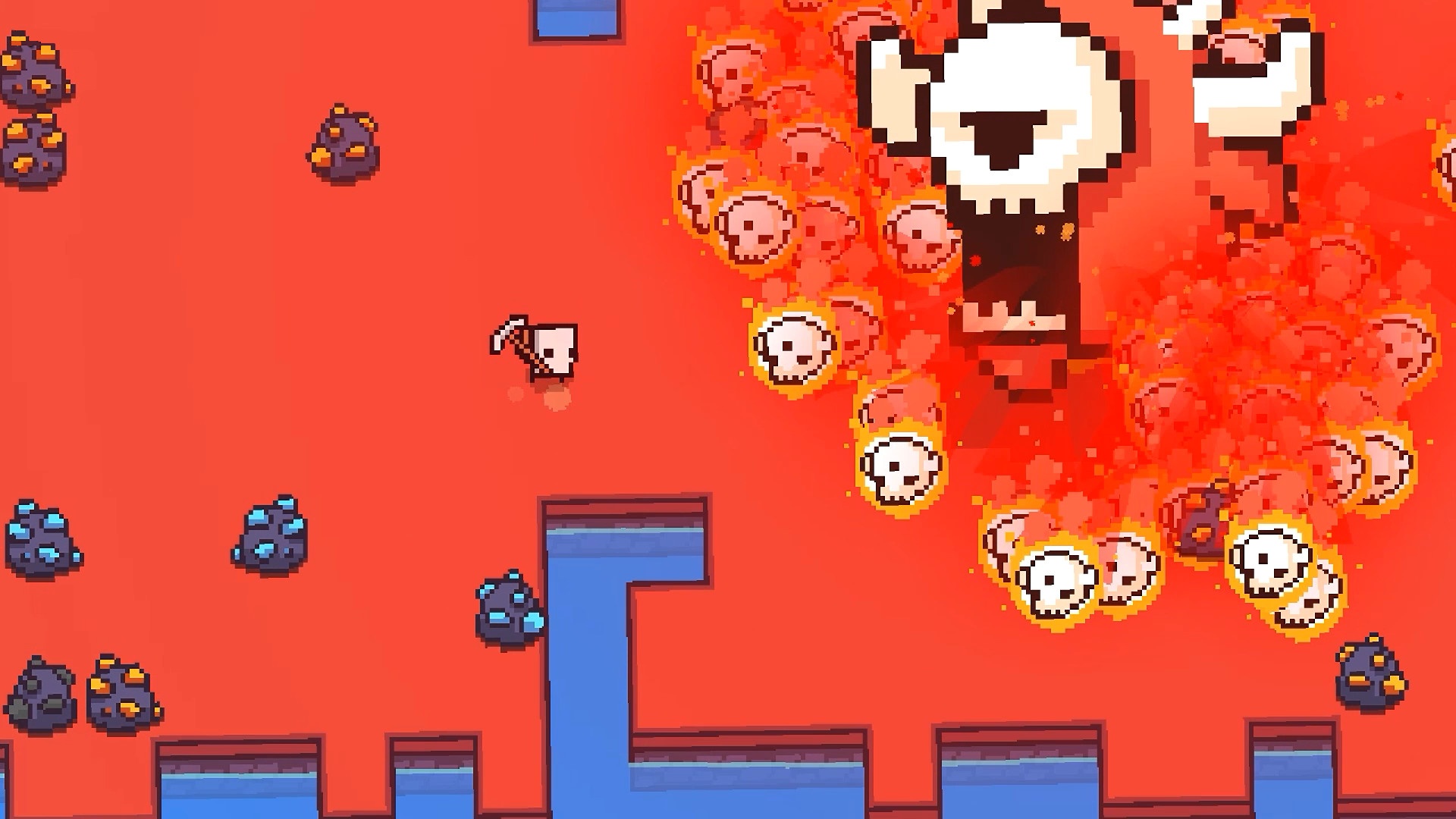 I must say that, while the game’s visuals might give the impression that this is a pretty basic game, it feels pretty polished. Nevertheless, it could really use some quality of life features, which, to be honest, I can’t understand why they aren’t in the game in the first place. First and foremost, there is no option to zoom out, nor a map, which only gets more annoying as you unlock new islands and find yourself having to run around when looking for resources or just something in specific. Then, while there are automatically assigned keys for tools that you can use, for some reason there is none for eating, which, if you don’t have healing potions, just makes the task of gaining health more troublesome than it should be. Last but by no means least, you can’t split stacks of items however you see fit, you can only split them in half, On top of that, for some reason, you also can’t actually choose how many items you want to sell. All you can do is either sell the entire stack or sell items from a stack one by one.

Usually, I’m not one to be concerned when games don’t have an end goal, which is what happens here, but for some reason, this doesn’t really feel like it works in Forager, at least not for me. Sure, you can unlock every single island, and you can force yourself to level up enough times to unlock everything, but for what purpose? The only way that I can make sense of this is if Forager was actually designed as a game for achievement hunters or completionists, because other than hunting those Steam achievements and unlocking everything that Forager has to offer, there is literally no point to all the grind. There’s no satisfaction gained from learning about the story and its world, because there is none, and there’s no enjoyment to get out of NPC interactions because all they do is give you fetch quests.

If you hadn’t figured it out yet, Forager didn’t end up being what I was hoping for. It was a letdown. Still, that is not to say that this is a bad game, because it really isn’t. In spite of that, I don’t think that Forager is worth the full price, but it’s a whole bunch of cute mindless grinding fun. With that said, the developer has promised free DLC, which should hopefully add more things to the game and make it more interesting in the long run. Right now, Forager feels shallow in terms of what it offers, but solid as far as its systems go. Hopefully, we’ll get to see it evolve a lot more as updates roll, just like titles like Terraria and Starbound did before it.

Forager feels shallow in terms of what it offers, but solid as far as its systems go. Hopefully, we’ll get to see it evolve a lot more as updates roll, just like titles like Terraria and Starbound did before it.