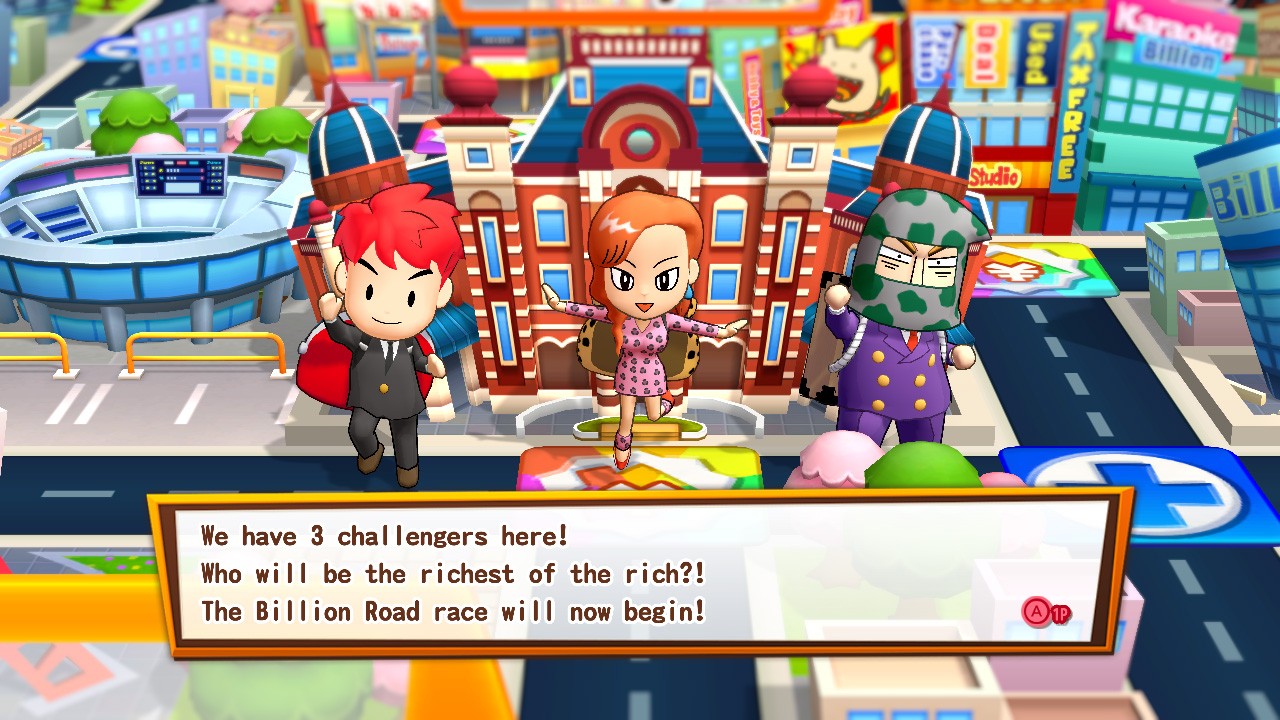 They say money makes the world go around. Me? I say that it’s more down to the gravitational pull of the Sun, but hey ho, we all have our own opinions on that. However, what I do know, is that money can make an effective subject matter for devising board games. Take Monopoly for instance, it’s a classic and world-famous board game that has been around for over a hundred years! It’s also a premise that revolves around another board game too, one that’s lesser known but is equally just as much fun as Hasbro’s offering, and that game comes in the form of Bandai Namco’s Billion Road as it invests a release onto the Nintendo Switch.

The main objective to winning the game is a simple one: to make more money that your opponents. This is achieved by travelling across Japan, visiting its districts and landmarks in order to invest and build wealth. However, as with any stock market, you can easily lose what you accrue; making Billion Road very much a game that requires skill, as well as holding a sprinkling of luck and chance. This is because of a number of elements that comprise the general gameplay; all of which I’ll get onto shortly. But the game also strikes a fine balance between success and failure and rarely feels unfair; making this a really enjoyable game that plays more like a role-player and an adventure, rather than a rigid board game that plays by the numbers.

As a whole, the game is presented in a number of ways. The first of these comes in the form of a televisual style of presenting, with a series of hosts who introduce the game at various intervals and give a running commentary on key events and player progress. From here, you can also select what style of game you want to play, from the marathon Tournament Mode to the quick-fire Skirmish Mode that caters for up to four-players locally. Whatever mode you play, the main game board takes place on a brightly coloured and highly detailed, as well as extensive, depiction of Japan. Roads run through a number of districts and landmarks, ferries take you across rivers and lakes and aircraft can even whisk you off to far-off places. 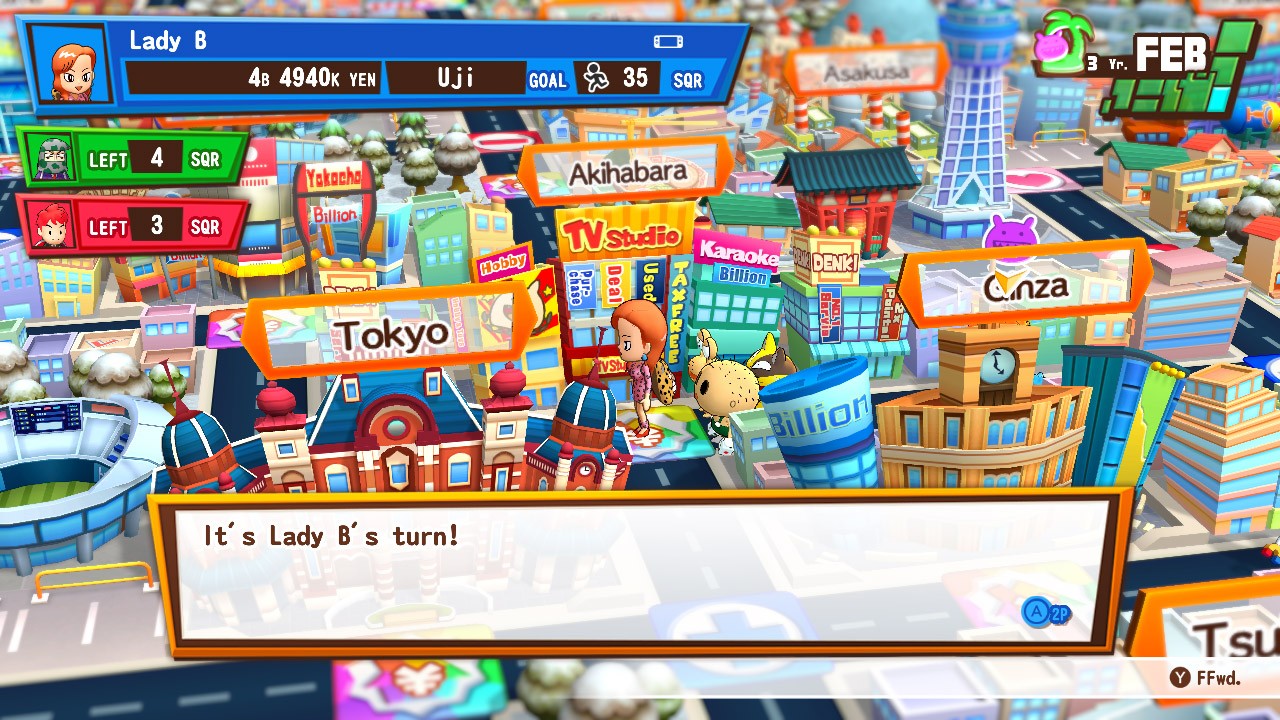 This gives the game a very different feel from your average board game. Each player still takes turns to role a die and make a move that corresponds to its face number, but here, you have the complete freedom to move in any direction. Dotted along each highway and positioned at every intersection, a series of tiles denote the distance you may move, as designated by your die roll. Each of these tiles represent a certain action that is taken when you land on your total number. For instance, Finish your move on a blue plus sign, and you gain a random amount of money from a roulette-wheel style of play. Fall on a Red minus though, and you lose money. Other tiles offer you items, or stores that you can purchase from, whilst landing on the district tile offers you a chance to invest within the infrastructure of that region.

In a similar vein to Monopoly, investing in districts presents you with a list of businesses that can be acquired. You can choose to buy one, or if you are lucky to have a bankroll to sustain it, buy every property, thus creating a monopoly and doubling the bonus payout that you can potentially receive. Whatever mode you are playing in, the game takes place over a series of ‘rounds’; each round covering a period of twelve months, with each player turn denoting one passed month. The length of the game is also determined by the mode you play, with Tournament playing over thirty years and Skirmish being over three. At the end of each financial year, each player is given an overview of their current status. Wealth and investments are calculated and each player is presented on a leaderboard according to wealth. Reach the end of the game’s cycle in years and the richest player wins.

It’s a simple format and the mechanics of the game have been designed to take away any complications that revolve around investments and making money. Everything here is presented in such an easy fashion, that playing this game becomes a real joy to follow and extremely fun to play through. Although this is largely down to an easy-to-follow style of play, it is also attributed by the number of elements that comprise the overall gameplay. As well as journeying across Japan in order to make money, you can also collect monsters, partake in random and seasonal events and strive to reach a target district, or goal, in order to activate a bonus. With so much going on, you can almost guarantee that every move you make, presents you with something different to think about or take part in. 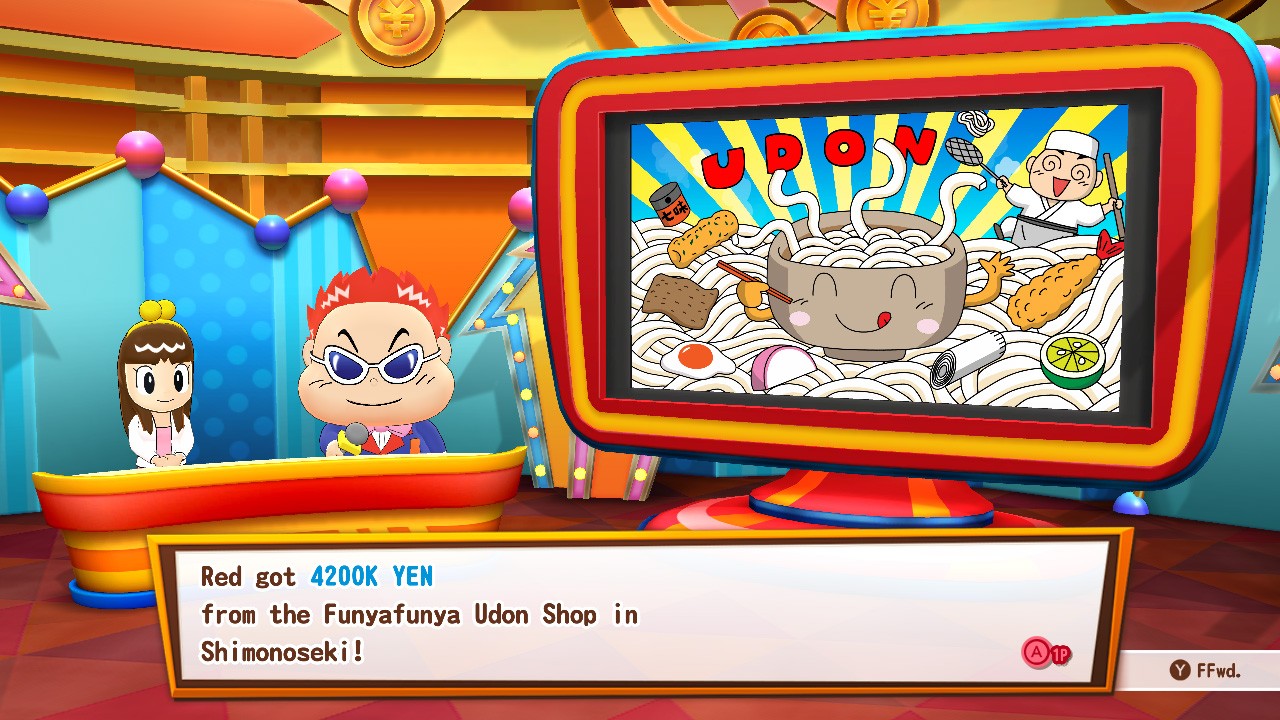 Monsters move around the playing area between each month. Find one and they follow you; up to a party of three. With over fifty variants of monster types, these creatures can either aid you or hamper you with their special abilities. For instance, one can eat his way through your finances to make you in debt, whilst others can alter the outcome of a dice roll; something that can be a game changer when going for the goal or target district. However, at certain points within the game, a giant monster can form and wreak havoc across the game world, destroying landmarks, businesses and, ultimately, investments. In order to combat this, you can send one of your monsters into battle, where they become supersized and fight amongst the skyscrapers in a Power-Rangers meets Pokémon set-piece.

Collecting items too, can alter the gameplay with over thirty variants, from re-rolling die to throwing two or more dice. As well as these elements, random events, such as carnivals or seasonal celebrations such as Christmas present a mini-game style of presentation that takes you back into the studio and can offer lucrative rewards. Heck! You can even board a plane at the airport and fly to Monster Island; a separate board where the more powerful and rarer monsters reside, giving you an edge in battle and over your opponents. Everything within the game has been produced to such an incredible standard, that it plays on a number of fronts, from board-game to role-player and from adventure to television show and turn-based combat; all of it perfectly enhanced with a highly detailed, polished and colourful level of presentation that captures of the essence of Japanese culture in one neat and fun package.

Overall, Billion Road is one of the best representations of a digital board game I have ever played. It holds so much charm and appeal, that it becomes simply irresistible to play. Whether you play solo or locally with friends and family, you’re guaranteed to become as invested as your in-game wealth. In fact, it holds so much value, that the game feels more like an adventure rather than a board game and its wealth of options, ensures that this is  game that holds its value over the long-term. Despite its subject matter of investing money, this is a sublimely easy game for children to play and understand too, making this one of the best family games I have come across. This is simply a game that’s worth investing in. I can guarantee that you’ll feel a lot richer in doing so. It’s simply ‘Billiont!’

Billion Road is rich with fun and definitely worth investing in.