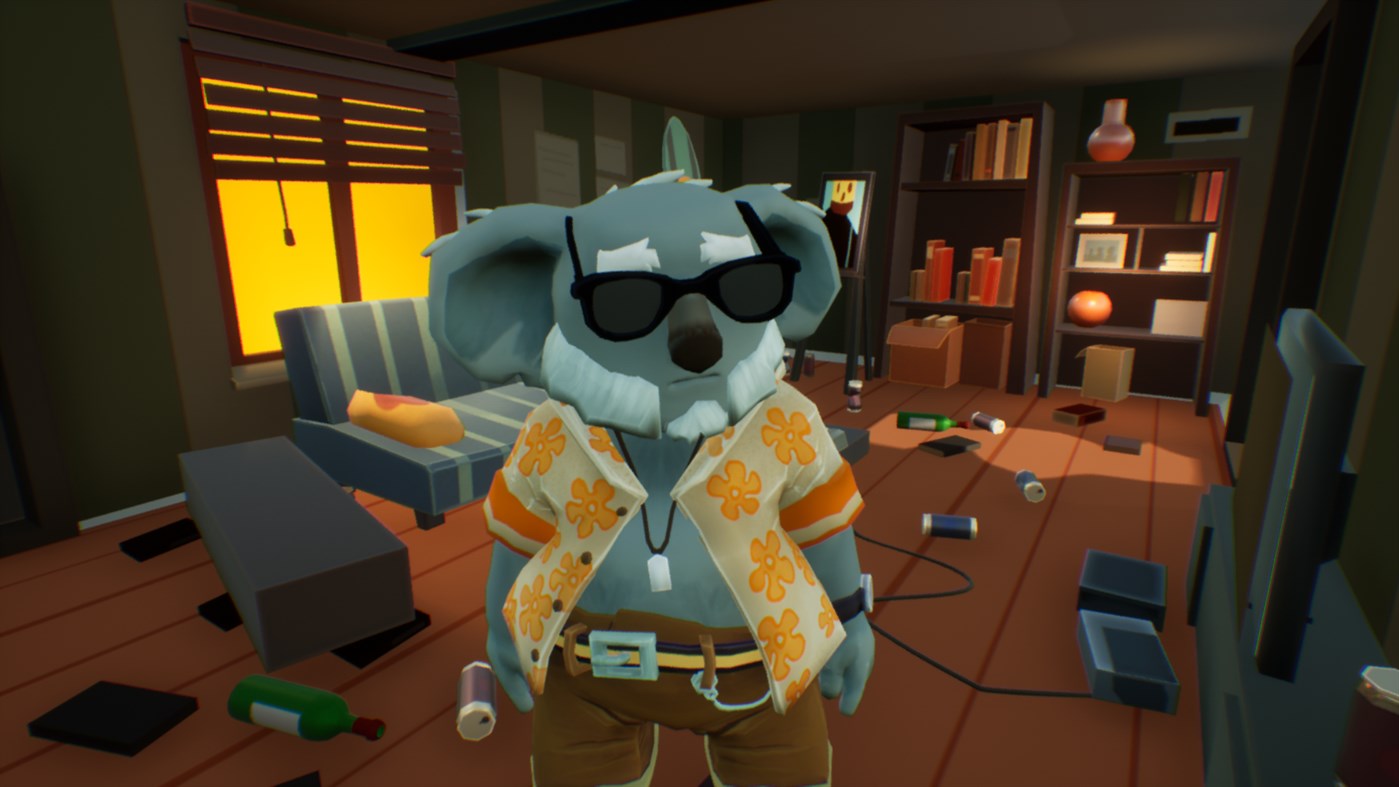 The line between art, entertainment and straight up games is such a thin and blurry line that, at times, we have to accommodate for leeway that we didn’t originally envision. For example, the storytelling that comes forward in Hollow Knight is best digested in the current format, a metrovania adventure game, and it simply wouldn’t land as well if it were, say, a visual novel or a puzzler. In the same vein, if you told me there would be a Hollow Knight animated movie, I would absolutely be on board to see what became of their vision. It’s clear that the developers of Convict Games have a special kind of vision, one that feels quite abstract and absurd like the creative minds of Baobab’s Mausoleum. Unfortunately, this is one of those instances where the strange and the weird simply doesn’t land in the same way, at least for this reviewer.

Stone is the titular character, a shades wearing, anthropomorphic koala detective who wakes up, hungover, to find that his love, Alex, has disappeared. An ominous phone call comes in to inform Stone that he will never see Alex again, and this, naturally, prompts Stone to fight through the pain haze and get on the beat to find out what happened. Over the course of about an hour and a half, you’ll see Stone talk to various colorful characters, gradually ask the right questions, explore the area around him and come away with a lead and very little else. Something that I sincerely have not been a huge fan of have been episodic games that don’t lead with the fact that they’re episodic. Things like 198X, Unholy Society and now Stone are guilty of this: if you didn’t know from carefully reading the description or following the creators online, you wouldn’t realize this is an incomplete tale. At least Baobab’s Mausoleum clearly indicates that it’s chapter one, whereas this game sets you up and leaves you hanging. It could be frustrating for players if they aren’t given proper expectations.

Stone (stylized as STONE) is a walking simulator, and the dev team does nothing to disguise this fact, which is nice. The entirety of the game involves you piloting around Stone and interacting with various objects and personalities (who are also animals) throughout his world. If you shuck out anything that is nonessential to the plot, you can, in no uncertain terms, be done with this game in roughly eighty minutes, maybe less, and it becomes up to the player to make your own fun. On the Nintendo Switch, Stone already has a formidable opponent to overcome: the ecosystem of the console itself. Whereas Playstation and XBox players can at least delve into the achievement system and create replay in an effort to find all the different trophies that come from choices, Switch players are strictly on a non-meta platform. Which means you need to really, deeply enjoy some of the nonsense within, and a lot of that is hit or miss when you get right down to it. 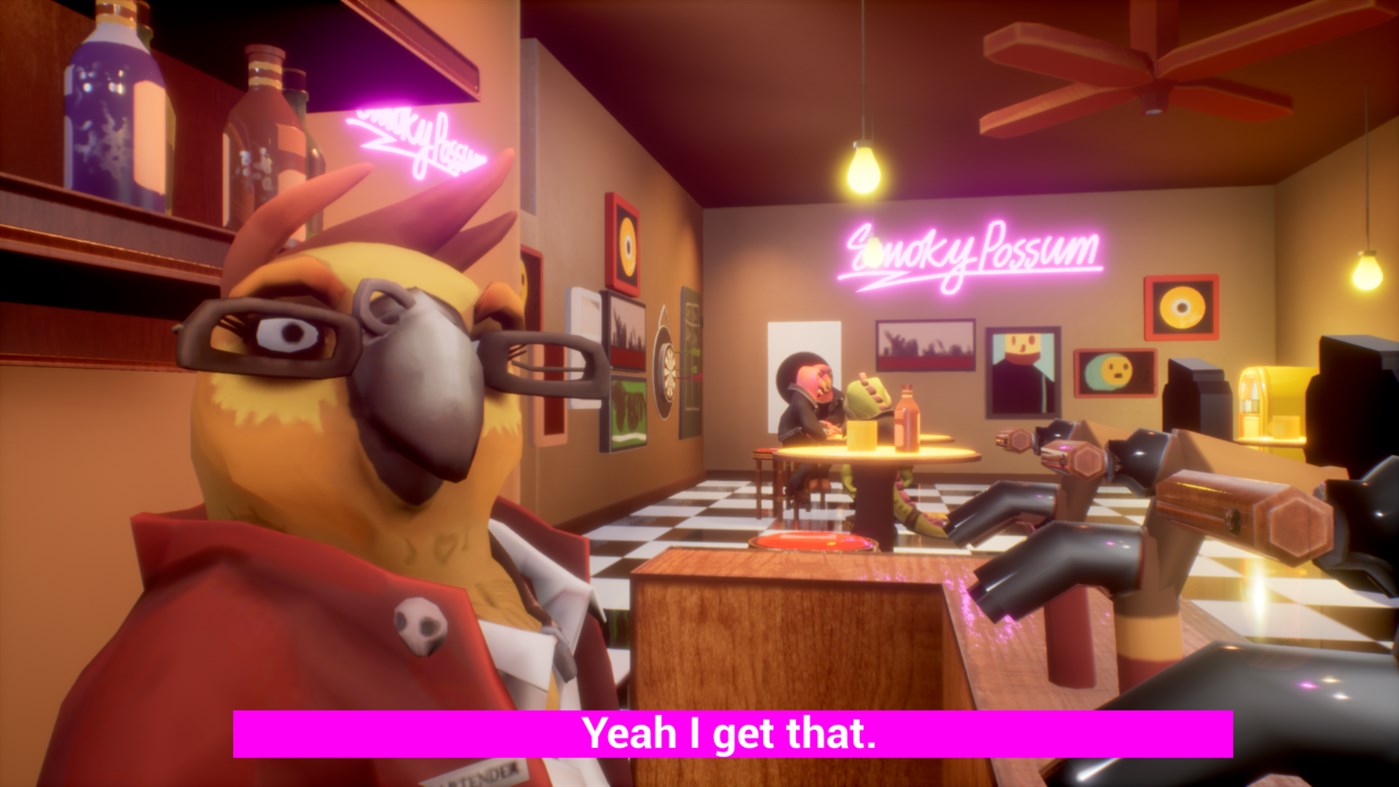 Stone looks pretty decent, set against a fantastic 3D world that’s trying to capture the noir elements that a PI commands while still maintaining some life and lightness. From his trashed apartment to a seedy bar, a thumping dance club to an offbeat record shop, I commend the environmental design of the game throughout. I like the world of Stone: it’s got the right amount of darkness mixed with some neon shafts to balance out the overall thematic of the game. Some more “entertaining” ideas of what things could be like under different circumstances intermingled with the grim reality of searching for someone who is definitely kidnapped and no one seems willing to help. Unfortunately, the graphical world is a bit sparse at times: the bar where you first begin your investigation seems large and empty, with a weird ratio to space and objects. In the same vein, character design fluctuates between nicely defined and unique (the crocodile proprietor of the Echo Club looked fantastic) to strangely archaic and blocky (the Fox thug who mistakes Stone for Roy feels like an early 2000s CGI character). It’s a wild swing from one end of things to another, with Stone himself falling somewhere in the middle. At times, his animation perfectly captures his emotions and bravado, and, at others, he feels disjointed and janky.

Speaking of Stone, since we need to focus on the character elements due to lack of gameplay, I didn’t really care for the koala as our leading man all that much. He starts off strong, swearing up a blue storm and emoting his despair, but then he gets rather flat and one note. The problem, potentially, is that I am not Australian and, as a result, a lot of the references that Stone drops went way over my head. That might be the inherent problem with referential humor: if you don’t align with what the writer is saying, then it just comes across as jargon or nonsense. Most of the animals that Stone speaks with are either outright hostile or dodgy, either because they’re scared or stubborn, and it feels like they all have umbrage with Stone that’s either directly related to Alex’s disappearance OR they don’t like Stone as a person in general. So you’re left with a lot of leftover dialogue that doesn’t go anywhere or really doesn’t do a lot to build you up in any given sense other than “Man, people only like Stone a little”. 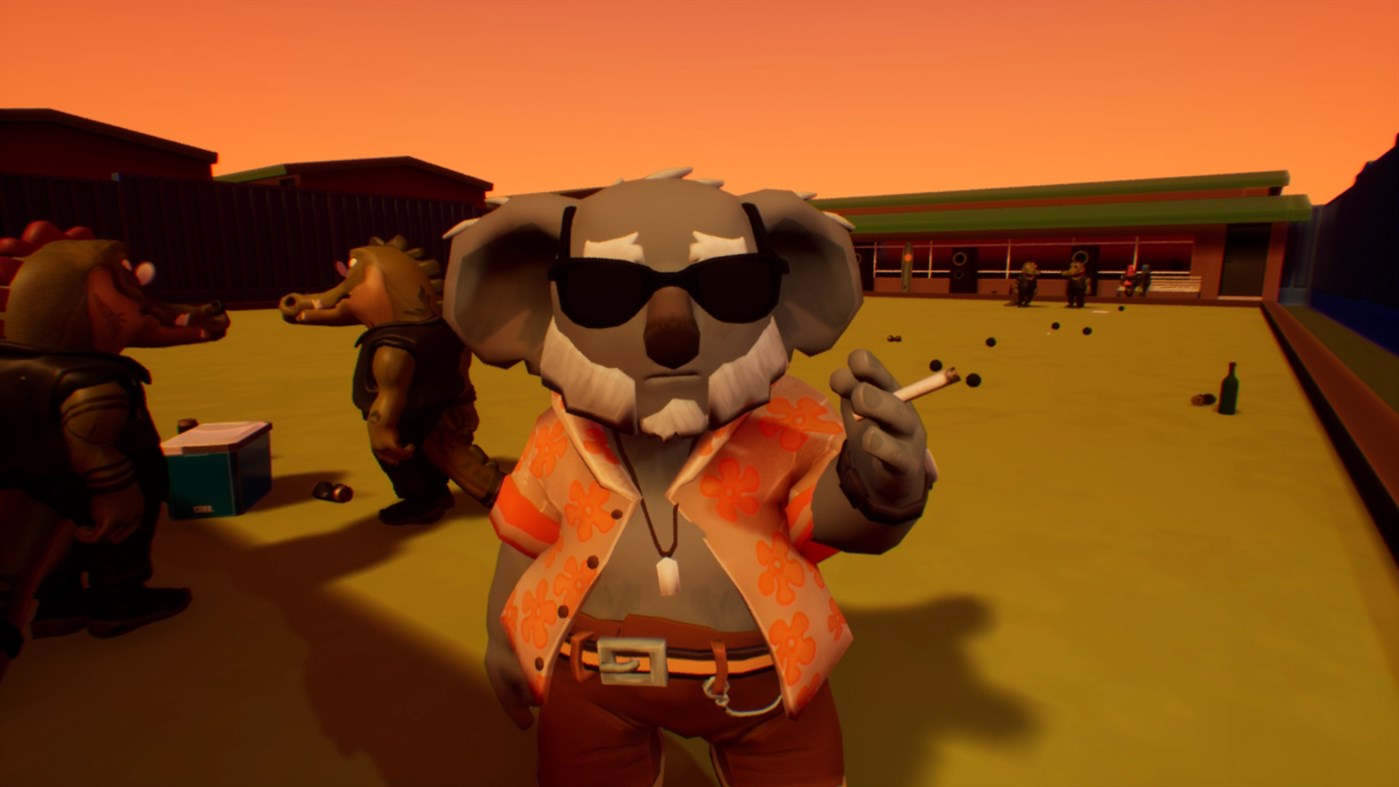 The oddest parts of the game are outside of the dialogue branches, which usually involve two choices and the chance to do them again if they don’t move the game forward. Convict Games decided to fill Stone with a bunch of atmospheric interactions that range from exciting to completely dull. Having Stone randomly be able to stop and smoke wherever he is doesn’t do much, but at least it builds his character. The music selection in the dance club gives you a better overall sense of things, but I found it weird that we branded this as a hip-hop game, yet the actual amount of hip-hop feel is pretty sparse on the ground. You can arbitrarily interact with some things, like the drum machine in your apartment or the television, but a lot of that is just sidetrack. Unlike a game where the little fidgety things are almost exciting to discover (consider, perhaps, Shenmue), the ones within Stone are time wasters that also don’t add a lot to your livelihood.

But, and I will say, one of my favorite things (and probably the reason that Stone has a massive install size for such a short game) is the cinema in town. The cinema has a purpose of triggering an achievement, which doesn’t do a lot for players on the Switch, but it also has, for some inexplicable reason, several feature length films of the classic, copyright free variety.  There’s nothing stranger than being on the hunt for your missing girlfriend, dealing with a bunch of animals who are pretty unhelpful and talk with a variety of accents, but deciding to sit down at watch The Cabinet of Dr. Caligari, in its entirety, instead of going on the offensive. While I don’t think that the movie cinema of Stone is going to be my new YouTube alternative, it was such an absurd discovery that I positively adored it. Plus, when you have a captive audience, it’s not a bad idea to throw out some inspiration that the devs themselves enjoyed.

Still, when all is said and done, Stone was just lacking in quite a few fields. There wasn’t enough meat to keep me going, not nearly enough gameplay to make me excited, and the characters just lacked the depth to make them memorable aside from the strangeness of being animals. If there’s a second chapter that blows the doors off the hinges, I’ll take a look into it, but, at the current time, I feel like Alex’s disappearance might be the last I see of Stone as well.

An already strange game that seems to have suffered in port performance, Stone feels like a great idea that someone had that got lost in actual execution.