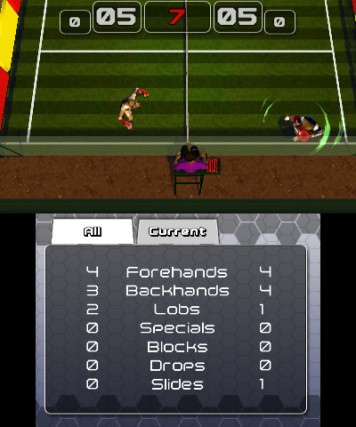 Power Disc Slam for Nintendo 3DS is overall an extremely well designed game. The game works around a basic objective of trying to throw a disc past your opponent against a wall to score points while protecting your own wall. At first, this could seem simple and monotonous. However, the makers of this game did an excellent job expanding on the idea in order to keep this game fresh and exciting every time it is played. However, before getting into all of these details, I will briefly discuss the few flaws with this game.

Perhaps the most notable flaw with this game is its graphics. While level designs aren’t terrible, character designs are not appealing. Even by 3DS standards, these models are bad, and characters are downright scary to look at on the character select screen. However, details of character design such as facial feature become impossible to notice once gameplay starts, so even though the characters can be off-putting to look at, this flaw doesn’t detract in any way from the actual gameplay.

In addition, I must mention that the tutorial becomes a bit annoying due to vague instructions on how to perform certain techniques. For instance, the way to perform a topspin upon throwing the disc is to “arch the circle pad.” What exactly that means, I couldn’t tell you, and I was unable to figure it out despite spending a long time trying different “arching” techniques. As a result, certain advanced techniques in the game may be difficult or even downright impossible to perform. Nevertheless, the tutorial isn’t required, and simply by playing around in the main game for a little while, players should be able to figure out all the necessary controls to enjoy the game. 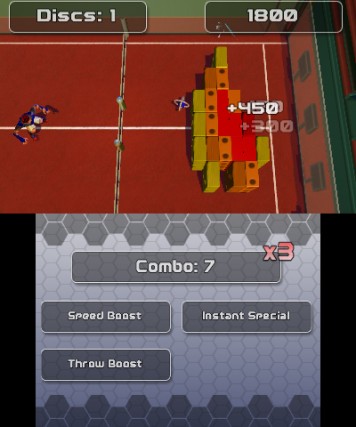 As mentioned earlier, the basic gameplay is simple at first glance. However, Power Disc Slam expands on this gameplay by adding in various different modes, each adding a unique twist on the gameplay. In addition, this game features a cast of eight playable characters, each boasting different skill sets and each being ranked from S to A to D in specific stats. This game provides a perfect balance of stats in each character, allowing each character to be viable and allowing players of all types to play the character which suits them best. Now, on to each of the modes.

In Arcade mode, the goal is to defeat every single character in the game in a row. In each round, the player plays against a different character on a different stage in a best-of-three set. In this mode, the player wins either by having the most points when time runs out, or simply by scoring twenty points. If the player loses at any point, their run is over, though the player is given the option to retry. However, if the player wins, they keep progressing and moving on to more opponents. This adds a ton of replay value to the game, as players are encouraged to keep going until they can sweep through Arcade mode, and then to move onto a higher difficulty, as each mode has a range of available difficulties to choose from.

In Free Play, the player designs their own game. The player chooses who they play as, who their opponent is, and which stage they play on. The players also gets to choose such things as how long each round lasts, how many rounds there are in a set, and how many points are required to automatically win the round. These options are a tad limited in their numbers, so I think a few more customization options would be nice. Nevertheless, it has enough options to keep the player entertained. This is definitely the mode for any player looking to play the game in its most basic form without any added mechanics or restrictions. 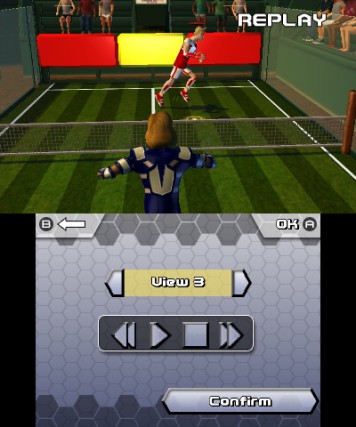 Cup mode is set up like the tournament mode in just about any other sports game, placing the player’s character in a single elimination bracket and having them climb the ranks in an attempt to win it all. Perhaps the most grueling mode in the game is Survival. In Survival mode, the player is tasked with beating as many characters as possible in a single round. However, the opponents work as a team, so their points carry on to the next member. So basically, the player has to be extra careful to defend their own wall, as each point their opponent scores carries over.

Finally, single player mode offers a wide variety of Minigames, ranging from games where the player throws the disc through rings, hits moving targets, and so on and so forth. These Minigames are very in-depth, as there are several Minigames, and each Minigame has several levels. This is another feature adding replay value, as the player always has another Minigame to come back to and play. On top of single player mode, this game features a multiplayer mode, allowing for local and even online play.

All in all, Power Disc Slam is an extremely fun title which is masterfully designed to keep the player playing. Its flaws are few, and fairly insignificant in light of all that this game does right. I believe that players of any kind will be able to find their perfect character match and be able to have a great time playing Power Disc Slam. It features a vast array of modes and features, always seeking to add something to its gameplay that the player would have never expected.