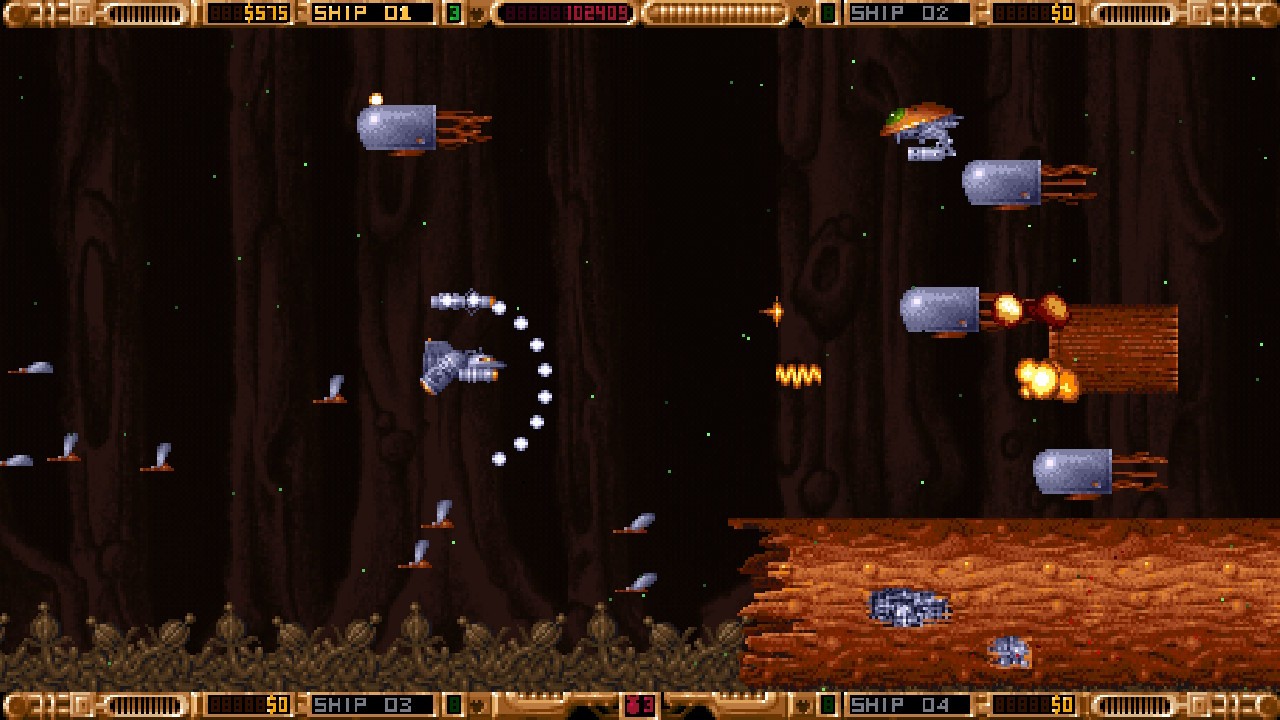 Time can make fools of us all. Just look back at the photo collections of anyone who was alive…prior to this exact moment, and you’re bound to find a minimum of three pictures that they wish they could erase from happening (but still keep the pictures to admire). Fashion, trends, and petty squabbles result in so many missed opportunities and chances to not look like a stereotype of a given era. For the crew who make up Limit Break, they were potentially sitting on a fantastic game back in 1993, but gave it up because, well, who can really say. Several sources cite “teenage drama,” but that feels like it’s a bit generic, doesn’t it? But anyway, for nearly 30 years a project sat, unfinished, until the lead developer, Krister Karlsson, discovered the demo in a box in his home. Because holy crap people can just keep stuff forever if you have a big enough house. Anyway, he got a group together, hammered out the details, decided NOT to release it on the Amiga as originally intended, and brought the project to the world, especially the Nintendo Switch. Now, fans can see a very interesting porthole into the early 90s with 1993 Shenandoah.

The concept of 1993 Shenandoah is fairly straightforward. There’s this bad dude named Nestor, who used to be a Colonel in the Interstellar Wars, but he’s clearly become jaded and is now a looting space pirate. In the course of his looting, he and his band of thieves and mercenaries have captured Shenandoah, a device that’s capable of turning lifeless planets into hospitable environments. As you can imagine, this is an important machine, and now you, nameless ship dude, will stop at nothing to explore 15 areas to fight Nestor’s cronies and get Shenandoah back. Oh, and there’s plenty of bosses in each of the worlds that Nestor has terraformed for fun, so get ready to deal with some nonsense.

1993 Shenandoah is a horizontal shmup that relies heavily on two ideas: progression and upgrades. From the very beginning, you have enough funds to choose one of six light ships and then off you go, shooting single shot, unlimited bullets and occasionally dropping a limited bomb to clear the area. As you go, you’ll be able to collect pretty gems that equate to different cash values, and this then gets reinvested in many things. Maybe you want to upgrade your current ship and get more base firepower. Maybe you’ll want to change ships, even saving up to upgrade to one of the massive class boats that represent speed, strength and balance (respectively). Maybe you’ll even want to buy one of the, and I’m not exaggerating, twenty-five different sub assistant weapons, each of which also has a triple upgrade attached to it. By the way, it’s 100% worthwhile to ditch your starter ship and upgrade to a larger class: not only are the general stats better, you have two extra sub weapon slots, meaning that you move from two to four additional forms of chaos to unleash on the surrounding universe. 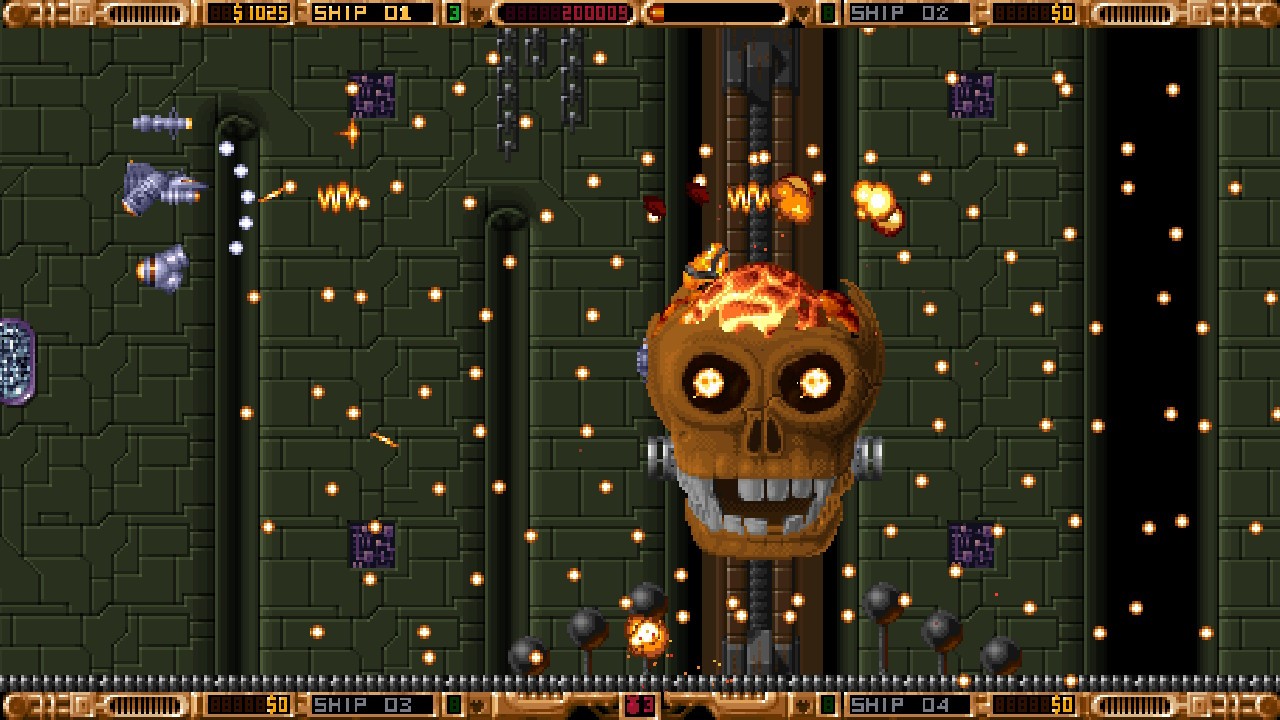 Once you choose your starting planet (I recommend Dennax because it just helps you get your bearings best), 1993 Shenandoah basically cuts you free with a bit of pop-up text from an overseer/handler to brief you on the environment and, eventually, the bosses you encounter. Like shooters from the 90s, there’s a fine line you need to walk between fight and flight, between wild shooting and conserving bullets. There’s a score multiplier to think about, which should encourage you to keep your finger on the trigger constantly to gun down everything in rapid succession. However, in the same vein, there’s a hit accuracy counter at the end that makes you feel bad if you wasted a bunch of shots firing into the vacuum of space. The enemy is varied and vast, coming in many flavours and types. You got little grunt ships that do nothing except explode, you’ve got medium-sized ships that fire off four directional bombs, you’ve got kamikaze pilots that spawn endlessly out of deployment bays, there are mines, there are plants, there are basically everything and anything you can think of. A good rule of thumb is that if it’s moving, and it’s not you, it needs to be shot. Then again, things like the mines will only detonate based on proximity and not impact, so you need to dart close to activate them and clear out the space debris you need to weave through to get to the next area. Also, you NEED those gems that some enemies drop: every cent counts towards inflating your ship into a massive war machine that makes short work out of bosses that fly in potato shaped space crafts (and are called potato) to pet worms that have gone totally rogue and mad with power.

When I got into the thick of 1993 Shenandoah, one word kept flashing in my mind: Tyrian. This game reminded me so much of a horizontal version of the beloved vertical shmup that I had flashbacks and am now looking to see how to play it on modern consoles. Maybe it’s how the gems are designed for the power-ups. Maybe it’s how you need to buy your way to the top in a true show of intergalactic commercialism. But 1993 Shenandoah has that same level of addictive quality in design and execution. You’ve got different difficulty levels to lock into so that you can choose the level of challenge to which you’re subjecting yourself prior to getting into the suck. You can decide which order you attack the planets, though, theoretically, going linearly from left to right will be the best approach. There’s lore and story happening right in front of you, but it’s only important if you want it to be important: otherwise you’re just blasting your way through different environments, all of which looked shockingly lush for a game concocted in the 90s for a system created in the 80s. Maybe Shenandoah doesn’t have as many strange side levels as Tyrian, and the game plays out just a bit faster, but there’s enough of a vibe there that I would wholly recommend it to people who also enjoyed games of that time. 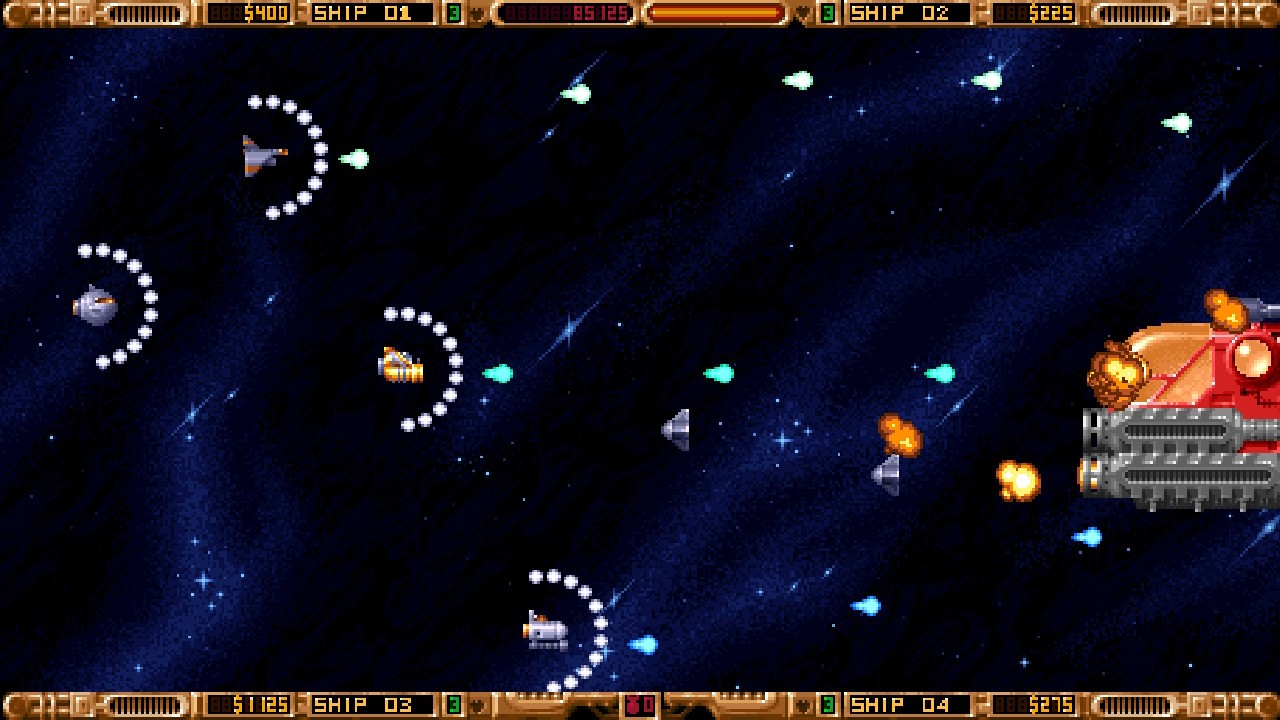 Now, it should be noted that 1993 Shenandoah is far from perfect. As a shooter that literally pulls from yesteryear, it comes with some caveats that never really sat well with me. First, hit boxes do tend to be a bit dodgy. Those landmines I mentioned? Even when you set them all off with precision and delicacy, there’s still a strong chance of running into debris that you apparently can never have a big enough window to weave through. There’s this plant level where some turrets, which cannot be destroyed, fire bubbles, which are small, drop no gems, only give you 50 points, but can create a massive cloud of damage that you have little to no recourse against. The worm boss has a wildly erratic movement pattern that’s based on angles and not much else, so it can get stuck in the corner and refuse to come out until you get close enough for it to swarm you. Plus, the upgrade system can be goddamn expensive to make the perfect ship: You need to play the game at least a couple of times to figure out which of the alt weapons work best for you (Thor for life!), and gritting your teeth to grind up cash without knee jerk buying smaller weapons so that you can have a better future while living in a mediocre present. Then, once it’s all together, you still have to deal with some fairly large, grindy bosses, which are awesome to view but a pain in the ass to deal with.

Having said all that, I can’t recommend 1993 Shenandoah enough. The aesthetics of the design, the levels, even the cool throwback loading screens that look like promotional posters absolutely enthralled me. The music is this beautiful waveform of synth and pulse, and it keeps you enamoured even as you deal with targets on the ground, in the sky and behind you. I loved shooting pop-up troops that looked like gold toy army men. This game may have been fondly remembered if it was released back in the day, but I love it even more now because it came at a time where I had nearly forgotten this sort of game design. It’s even better than a callback or “retro inspired” game: it’s a legit artefact that I didn’t know about, unearthed and repurposed for the modern era. The Switch has been a fantastic haven for bullet hell and other shmups, and now there’s room in the hangar for one more proud ship.

A fantastic love letter out of time to the PC shooters of the 90s, 1993 Shenandoah is neither late nor early, but has arrived precisely when it’s meant to.