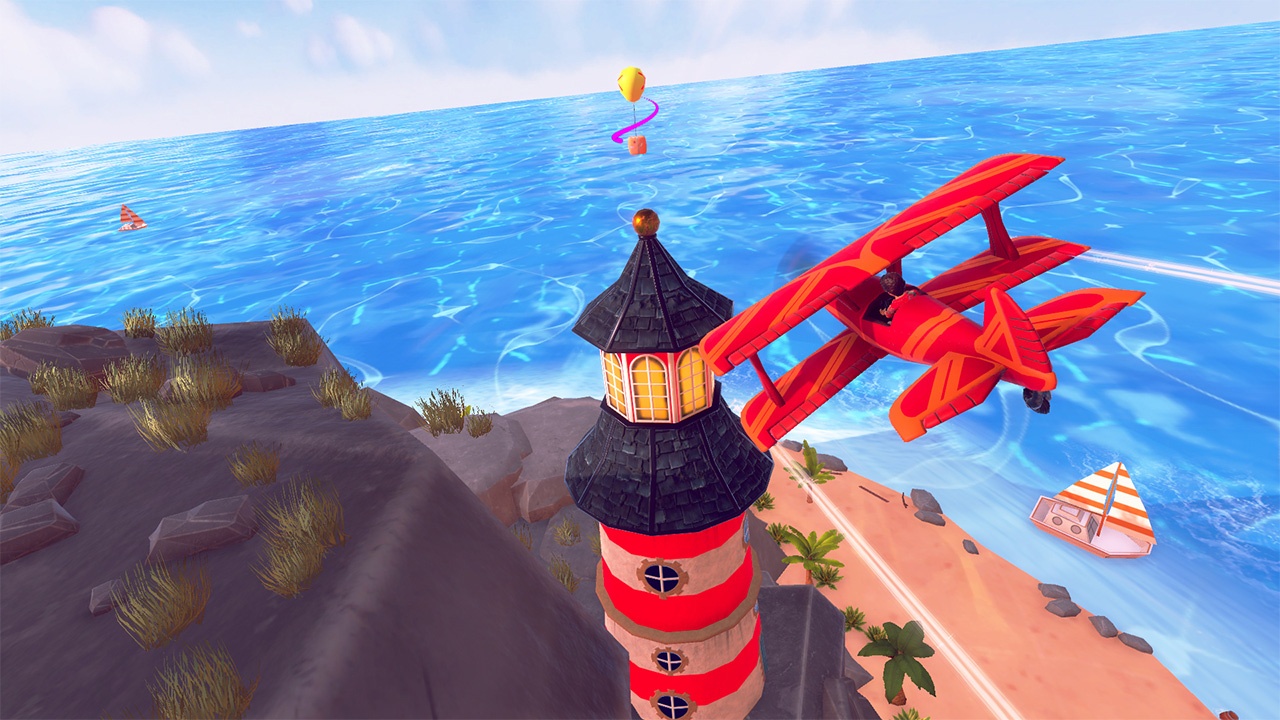 Back in the Nineties, the Super Nintendo’s Mode 7 brought with it a new style of gaming that was able to bring 3D gaming to the console for the first time. It spawned some great titles, such as Rogue Squadron and arguably, one of the best games to appear on the console, Pilotwings. The game was to make further iterations on other Nintendo consoles too, such as Pilotwings 64 on the Nintendo 64 and Pilotwings Resort on the 3DS. However, Nintendo made a decision not to continue its franchise on the Switch, leaving a void within its genre that sorely needed to be filled. Well, fear not, as Z-software has answered the prayers of any budding pilot, with Pilot Sports now landing a release on the hybrid console.

Much like Pilotwings before it, this flying game is all about taking a joy-ride in a variety of flying contraptions; taking in the scenery and competing in a series of events to put your flying skills to the test. However, it isn’t all about flying though, as the game offers a variety of modes that includes parachuting and skydiving, jetpacking and gliding, as well as the good, old-fashion bi-plane. Whatever style you choose to play, each one contains a series of mechanics that differentiates each mode from each other, with a unique feel to each of the challenges that handles very differently from each other. It all adds to further the variety on offer here, with each of the different styles of play being easily accessible and a joy to play with smooth controls and technical performances.

There’s a more arcade style to the game, rather than a simulation; although you do have a variety of elements that you need to watch, mainly in the form of a series of gauges. Whether you’re skydiving, jetpacking or flying, you need to keep a careful eye on altitudes, fuel consumptions and speed; especially when flying within the glider in order to maintain a decent altitude. However, there’s nothing here that is overly-technical, with a simple and minimalistic control scheme that only requires movement from the left thumb-stick and one or two face buttons that adjust your speed control. 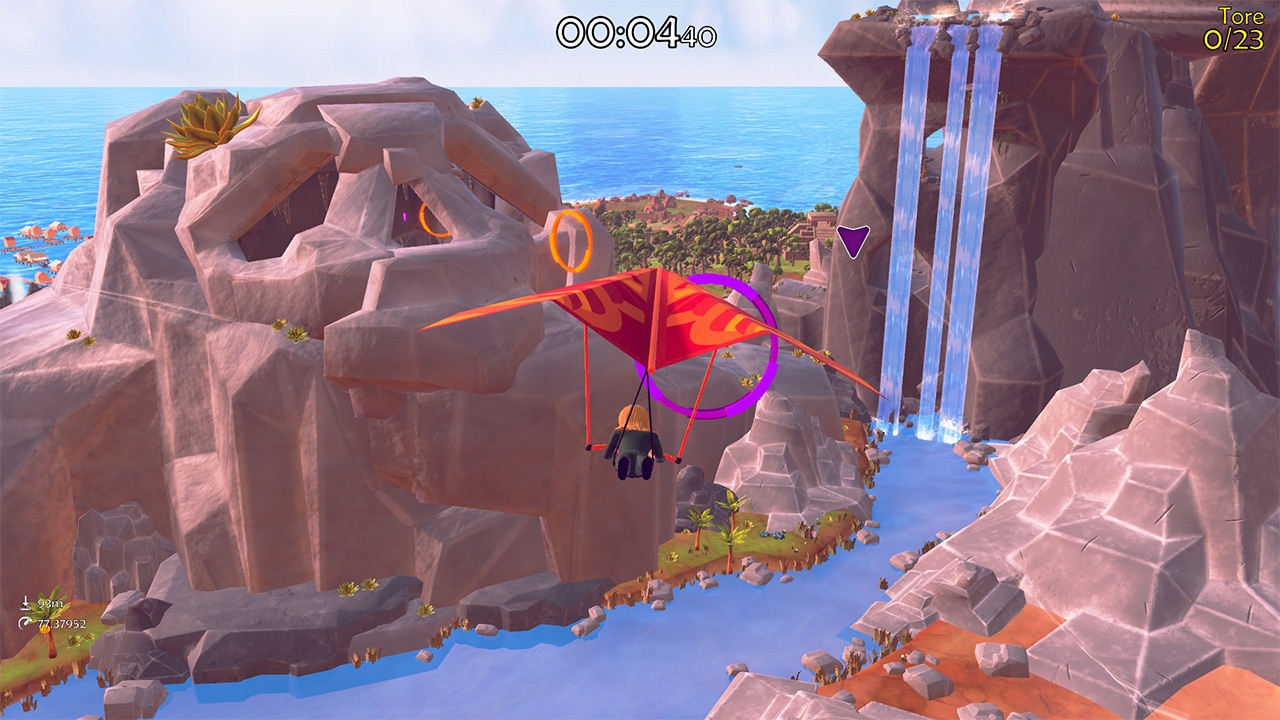 The simplicity of its control scheme allows you to play the game locally with up three other players, making four players in total. Using one Joy-con each, you can compete with each other in a split-screen mechanic with a good precision on the control of your craft or parachute. The performance remains just as smooth too within this mode, creating an enjoyable game that makes it ideal for party play with friends or family. There’s a nice level of personalisation here too; although it is limited to only character and level selections. With eight different characters and up to ten slots available for competition selections and tournament play, there’s plenty here to keep everyone happy.

For solo play, the game splits each level into five segments; each one increasing with difficulty. By successfully completing challenges, you gain gold medals which, in turn, unlocks further events should you acquire the required number of medals. This mode presents all of the disciplines that are available, offering  around fifty different levels that covers all of the different craft types and parachuting events. Everything takes place over a majestic looking island which boasts a good variety of sceneries and landmarks. From jungle areas to rocky canyons, streams, cliffs and even lighthouses and temple ruins, there’s plenty here to distract you from your flying duties, creating an environment that is fun to explore and delicious to look at. 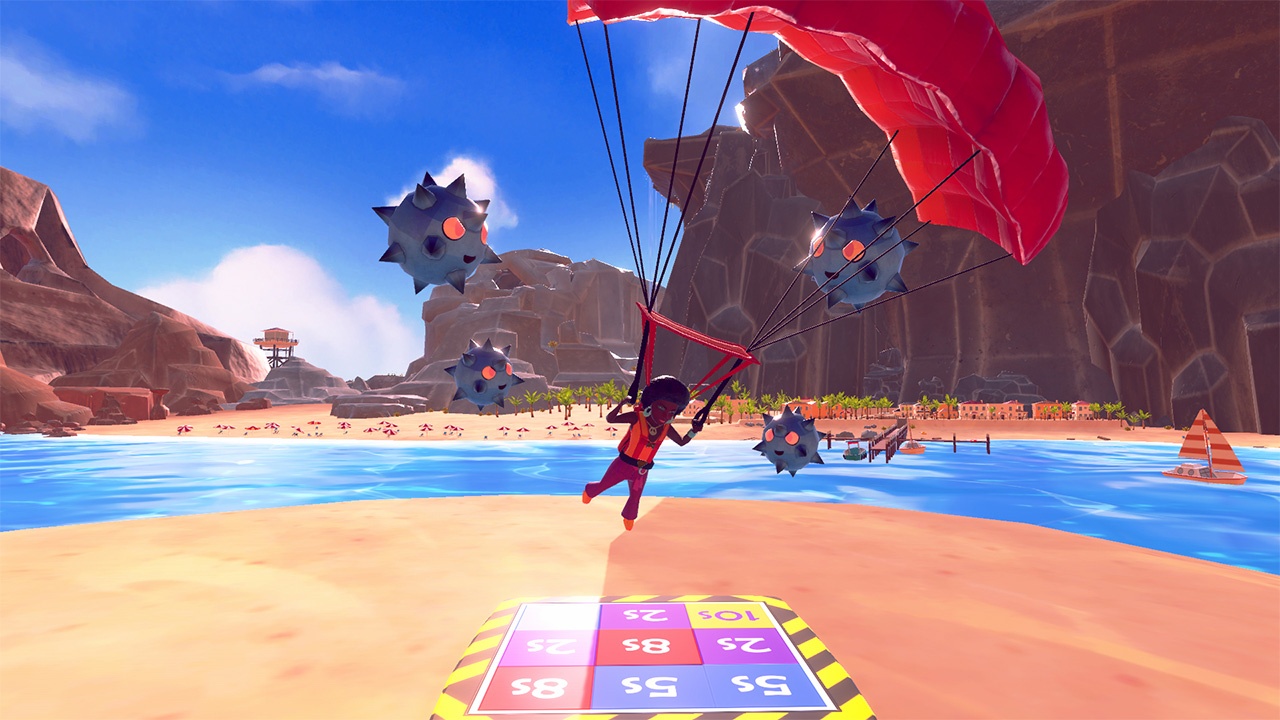 If you’re familiar with Pilotwings, then there’s a lot here that you’ll be instantly familiar with. However, if you’re new to the genre, then its ease of accessibility makes this an enjoyable game for all ages and newcomers too. Each of the disciplines involve using your flying skills to the max, usually centering around traversing a course of rings or hitting a certain marker that signals where you should land. However, there’s a nice calming feel to the overall style of the game, mainly due to the graphical presentations and smoothness of its control scheme.

Despite the simplicity within the gameplay of this title, it produces a nice balance in its challenge. Each of the levels increase in difficulty with each discipline, yet they never feel impossible or beyond your capabilities. They may need a bit of practice here and there, but with increased flying time, you soon learn the layout of the courses or the mechanics of the level to achieve the maximum score and medal awards. It’s here where a lot of the fun lies, in fine-tuning your skills and completing the levels; as well as just enjoying the ride around the picturesque scenery.

Overall, Pilot Sports brings a superb replication of the same style of game that was found within the Snes’ Pilotwings title. It plays in a very similar way and if you were ever a fan of the original title, then you’ll find plenty to love here. However, if you’re also new to the style of game, there is still a lot here to entertain and offers a style of play that is suitable for all ages. There’s a nice, simple pleasure to just flying or gliding around the island, whether you’re traversing the courses or just simply taking in the scenery. Its finely-tuned level of challenge is never a stressful affair; even if you can’t quite pull off the braking turn to reach a tight circle or never quite hit the mark on a parachute landing, it never feels frustrating and easily promotes a one-more-go mentality. With a distinct variety in aircraft control, the capability to play with four players and the simplicity of its mechanics, makes this a game that is fun, often exhilarating, yet also calming in its execution. All in all, this is a another fine title for Nintendo’s hybrid device that sits nicely within its ever-growing library of games.

A game that sports a good deal of fun and entertainment, as you pilot your way around a series of disciplines and courses amongst beautiful backdrops.