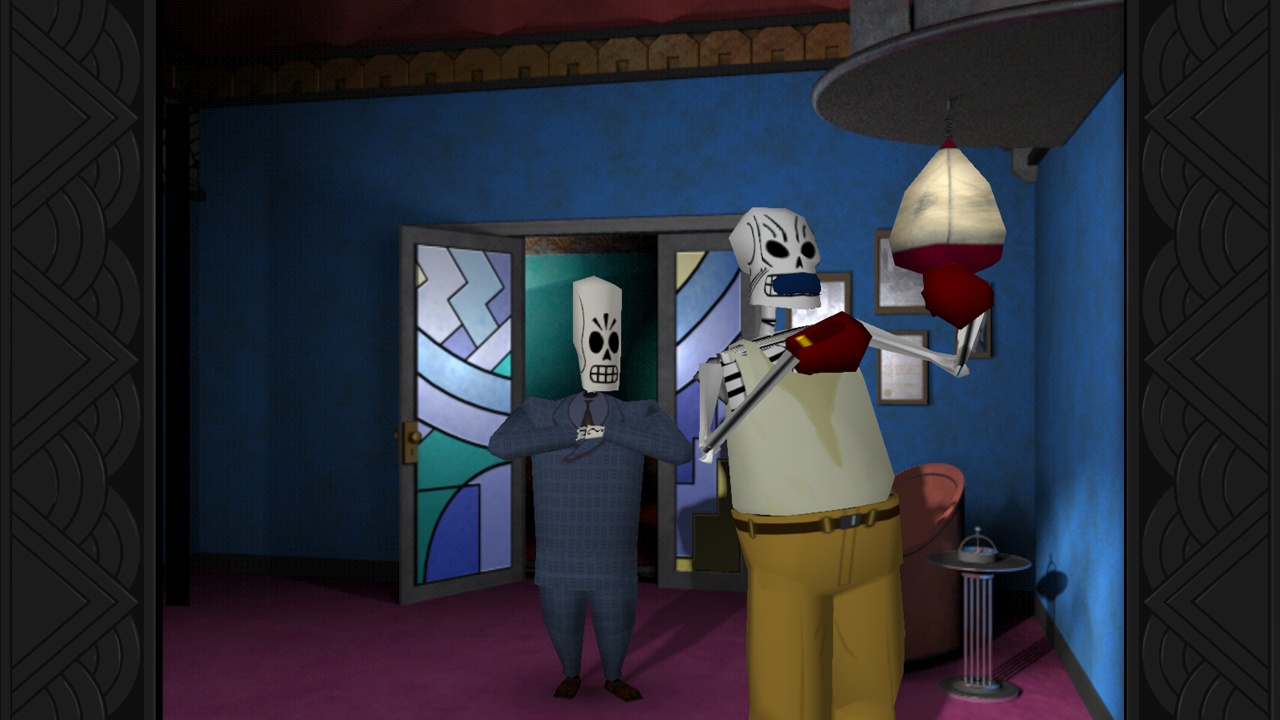 I have a confession to make. Despite being an avid fan of LucasArts adventure games like the Monkey Island series, Day of the Tentacle (one of my favourite games of all time), The Dig and Full Throttle, I’ve never played Grim Fandango before. In my defence it was originally released in 1998, the year which saw the arrival of Half-Life and Starcraft which between them dominated all my PC gaming time and by that point I also had a PS1 and so was additionally distracted by console releases. Yet over the next 17 years Grim Fandango continued to be lauded as one of the best games of all time, and so with the release of the 2015 remastered edition I would finally get a chance to experience it for myself.

First things first – Grim Fandango definitely is a fantastic old-school adventure game. A funny, engaging story featuring a whole host of memorable characters spread across a variety of locations- it’s certainly easy to see why Grim is beloved by fans of the genre. The tale of Manuel ‘Manny’ Calavera, a travel agent in the Department of Death and his quest to save a lost soul, puts many modern adventure games to shame with its well-written story and strong sense of humour – I found myself actively pursuing all dialogue paths and examining everything I could not for completeness, but because I wanted to hear what Manny would say. The puzzles are also memorable for both their inventiveness and their variety – success isn’t just a case trying to use all items with all interactive objects as other aspects such as timing and your location can matter as well. The length of the game is also impressive – Manny’s epic quest will likely take you at least 10 hours to complete, and even longer if you refuse to consult a guide. 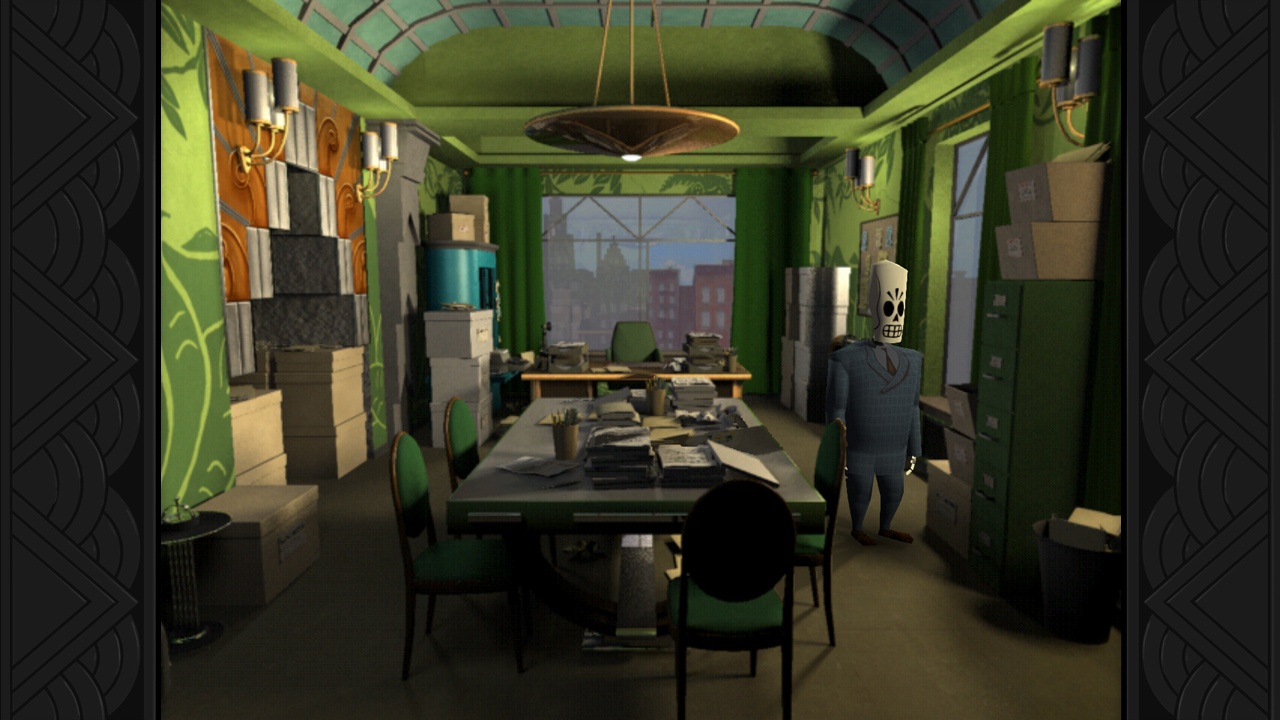 That brings me to the downside of old-school adventure games: the difficulty. While all the puzzles in Grim Fandango are grounded in logic, it’s often a very surreal logic. It’s also entirely possible to miss key objects in the multitude of areas, despite Manny helpfully turning his head to look at items of interest. With no help feature, item highlighting or map for quickly jumping between locations it can sometimes get extremely frustrating and to my shame I had to consult a walkthrough on several occasions – the sign puzzle in the Petrified Forrest in particular I don’t think I would ever have solved on my own.

While the classic gameplay was left intact, the graphics have received a bit of a facelift. The visuals in Grim Fandango have held up pretty well, and in fact it’s possible to switch seamlessly between the original and remastered graphics at the touch of a button, and this is mainly due to how good it looked anyway. The Eighth Underworld has a distinctive Film Noir style atmosphere which strangely goes very well with the skeletal characters and demonic natives who live there, and it’s the inhabitants themselves who have benefited the most with improved character models, while the backgrounds have just been given minor improvements. The cut-scenes however don’t appear to have been upgraded at all, and clearly show up how old the game is.

The most obvious aspect that has been remastered in this edition however is the control scheme. The original release of Grim Fandango was infamous for its ‘tank’ control scheme, also used by Resident Evil at the time, but gamers now are treated to ‘camera-relative’ controls instead (although tank controls remain an option in the settings menu) and can opt to use either the keyboard or gamepad – and there’s even mouse support now so the game can be played like a traditional point and click adventure game. I never quite settled into a preferred system as I found the mouse controls the easiest for locating items and scene exits against the backdrops, while playing with a gamepad felt more intuitive and allowed for quicker navigation. I was unfortunately disappointed that the gamepad controls refer to PlayStation terms like square, circle and triangle despite the fact I was using a 360 controller (as I imagine most PC gamers would be) as this just smacked of laziness in porting the title to PC. 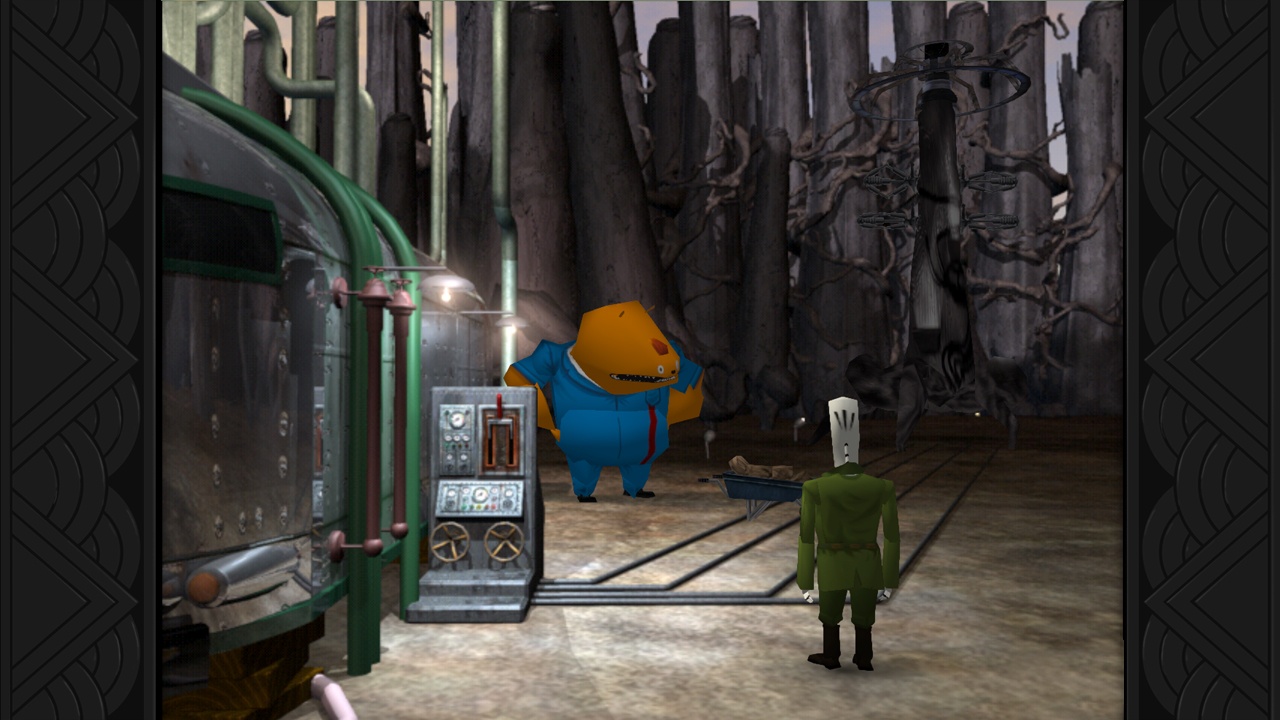 A final mention needs to go to the sound and music of Grim Fandango which is amongst the best I’ve encountered in an adventure game. The jazz and orchestral soundtrack is wonderful to listen to and the voice actors of pretty much all the characters are professionally done and full of personality. The remastered edition also includes the option to activate a director’s commentary at certain points of the game, which actually spreads beyond the director to a wide variety of the crew and staff. In the past I’ve experienced similar commentaries that have been dull or too dry, but here they’re fascinating to listen to.

The verdict then – was it worth the wait? Well, yes and no. While Grim Fandango is certainly a great adventure game, it would have blown my socks off if I’d played it when first released. It goes without saying that hardcore fans will have a great time playing it again and will relish the remastered aspects, even though they’re a bit limited, while modern gamers will find much to appreciate as well if they’re prepared to accept the challenging puzzles.