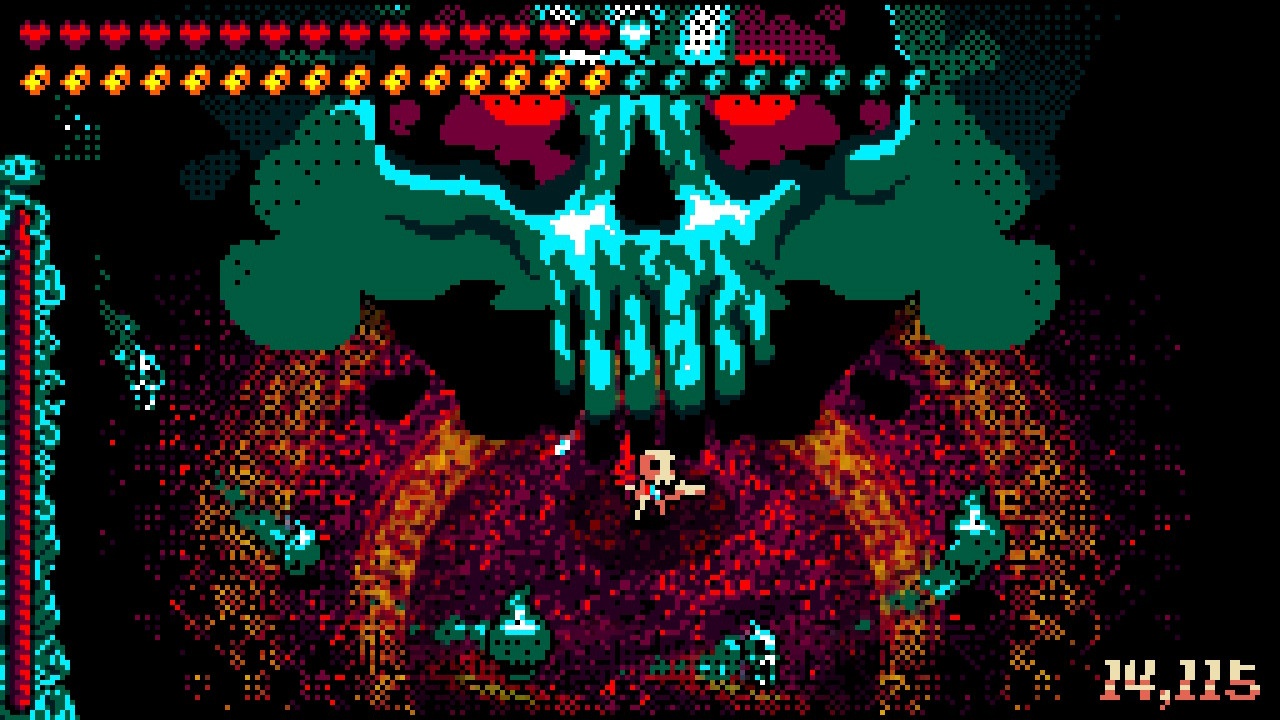 When I take a look at Skelly Selest, from an outside perspective, the word that comes to mind is “ambitious.” Not just for one reason, either: for several reasons. Not only is it a bit rough around the edges, visually, but there’s so much to it. The game honestly doesn’t want to decide on one thing, and I can’t tell if that’s a result of indecision or the need to tell a ton of tales in a single breath. Also, the game is twice as expensive on the Switch as the PC, which might be a tipping point for otherwise interested players: five bucks is something you can fire off without much thought, ten bucks is a meal and potentially emergency gas money to get home. However, if the game can hook a player, it’s a worthwhile endeavor. So…is it?

Skelly Selest has a plot, but it’s a weird plot, and, honestly, it’s not a very good plot. See, I guess there’s this prophecy that Hell will, eventually, runneth over and the world will be cursed with demons and zombies and all that jazz. So there’s a sacred order tasked with making sure that either this DOESN’T happen or that they respond when it does. I’m not totally clear on it, because, well, I didn’t pay that much attention. In any case, the point is that you’re a skeleton, but you’re a good guy skeleton, and you need to deal with a ton of bad guys who are all planning to mess up the world. Oh, and you need to stop them in a number of ways, from dungeon crawling to wave shooting to playing card games. That last one isn’t a typo, but it also isn’t important, but it also also is in the game and thus is fair targeting for the review, so here we go.

Skelly Selest wears a lot of hats, but you won’t be able to see a goddamn bit of gameplay if you don’t go into the options and turn off the shadows as soon as possible. I think the game may have had a cool “torch aura” effect on other consoles, but, on the Switch, it’s like playing The Binding of Isaac with the Curse of Darkness permanently in effect. Once you toggle things off, you get a better look at Skelly Selest and see what you’re dealing with. From the get-go, there are a variety of play modes, but they break down into three standard ideas: roguelike dungeon crawler, roguelike wave brawler, and card game. In the first two modes, you are a skeleton with two primary functions: swing an axe and shoot a gun. Much like Akane, you gotta kill dudes with your axe to recharge your gun, but, unlike Akane, the gun has an unlimited range and can be a huge boon for when you’re trying to clear things out with minimal choking. In the process of everything, there’s also a ton of collectibles that range from affecting your combat to simply changing your appearance. The latter are a series of hats that, once the red mist clears, you can actually pre-assign to your skeleton before going into any of the different game modes. Sadly, if you pick up a new hat during the course of your exploration, you gotta wear that until your death. Hopefully you can find all the hats quickly so that way you can just enjoy the duck-headed skeleton forever, like I do. 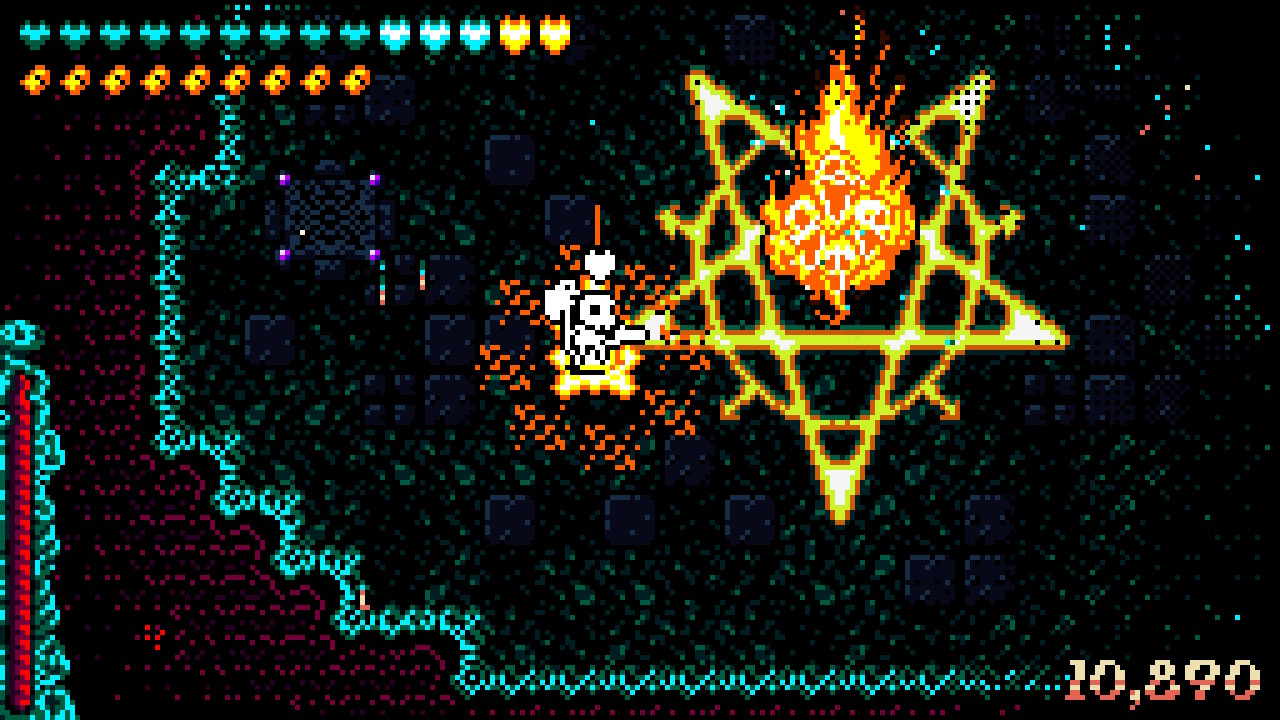 Skelly Selest has a lot of positives and negatives, and they do a good job of balancing each other out. A lot of the focus for the promotion of Skelly Selest is that it’s a score-attack brawler, and you gotta keep the kills going in order to keep the multiplier high. However, in the dungeon crawler mode, it’s hard to always keep chains going due to looping into empty rooms, or having enemies who are a bit more elusive than others. On the other hand, the multiplier works perfectly in the arena wave-brawler, and intrepid players will work out a good rhythm of slash, shoot, backtrack, shoot, slash, and repeat forever until the bosses arrive. The drawback, naturally, for the brawler is that you don’t get as much downtime to kind of get your bearings, and, in my opinion, you don’t get as many power ups and modifiers, which are the real bread-and-butter of the game.

In the course of either game style, you’ll find power ups that affect all sorts of statistics for your skeleton warrior. This includes stronger, fragmenting bullets, more health, summoning a little helper dude that attacks other critters, blessed bullets (bullets that fly true an do better damage), and having your axe shoot out a shockwave of damage, effectively making it a semi-ranged weapon. Again, I haven’t found all the game modifiers, but Skelly Selest has a good number of things to find, and a ton of ways to get them. Champion mobs drop them, store keepers sell them in exchange for your health, or maybe they’re just chilling inside a jar and you gotta whack it with an axe to make it appear. Oh, and they also drop from boss battles, and those are usually some of the better ones, though, by and large, I noticed that there isn’t really a consistent type of power up that came from defeating the massive, bullet-hell style bosses, but the quality is overall great. In the wave brawler, though, you can only pick ONE between waves, sometimes with an added health bonus, so you power up more slowly. Though I got lucky and had a store spawn where one of the items was a resurrection power up. So get that first, then spend all my hearts buying the rest, then die and be reborn. Good times. 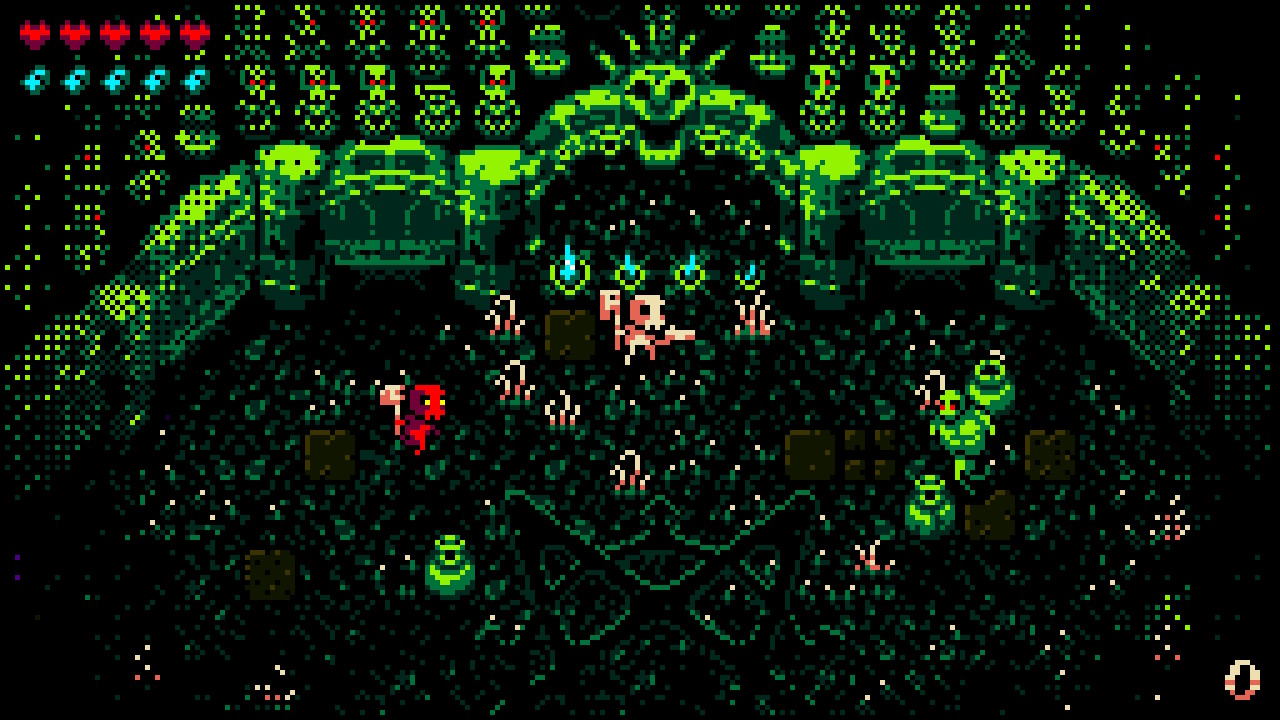 As for the actual gameplay of Skelly Selest, things are merely alright. It’s not as omnidirectional as I’d like, meaning there are several times where you think you’re in line to hit an enemy but you’re a couple of pixels off. Nobody moves particularly fast, so it can sometimes feel sluggish, yet it still moves along at a good pace. The mobs are more dangerous than the bosses: every boss develops patterns that you can pick up on after just a couple deaths, and then they become something that you look forward to. Whereas when I walk into a room and three of those massive, golden shamblers appear and can take out two or three hearts with every hit, I just give up and cry while firing bullets wildly. When the game is on, it’s really on, and you do feel like a divinely ordained beast, here to clean up hell one room at a time. When Skelly Selest is unfair and painful, you find yourself dying fast, and then the game reminds you that you’ve died fast by showing you your ranking versus your other runs. Remember: the score is the key component here, so whether you’re more focused on dealing with an Archlich or rescuing wayward vessels, you gotta be aware about keeping your points up. I highly recommend getting a separate controller, just because the Joycons start to dig into your hands after a while and you want to be loose for how long a game can go.

Lastly, that damn card game. It’s a variant on the old “four corners, a number in each corner, highest number wins” sort of deal. If you play a number that trumps your opponents, their card flips to your favor. Highest of ten cards played (five each) wins. It’s fine. It’s simply fine, and that’s all there is to it. When you’re playing the main game modes of Skelly Selest, you’ll ultimately find cards as drops instead of helpful power ups, so you decide to take a break from a run and play the card game once or twice. You’ll definitely lose a LOT at first, because the CPU will always have better cards, but it slowly gets better as you find better stuff, and plan a few moves ahead for what you want to play and where. Winning does come with a few perks (there are additional skeletons to unlock, after all), so might as well give it a whirl if you’re tired of the other game modes.

Skelly Selest has a lot going for it: the pixel graphics and standard “evil” soundtrack are nothing to write home about, but Digerati has picked a good title to port to the Switch and the port is solid. There’s a lot of roguelite replay, tons of power ups to discover, and that classic feeling of enjoyment when you get the combination just right and you’re mowing down baddies. The only issue I can see is that the game doesn’t necessarily have a lot to help it stand out. It does things well, but there’s no moments of “tight-as-a-drum” or “I feel so goddamn pumped.” It was just fun, compelled me to keep playing for like 30 minutes in a row, yet when I put it down and came back to my Switch a couple hours later, it wasn’t screaming for my attention. If you’ve managed to avoid the soul-sucking twinsticks like Isaac or Gungeon, this is a good place to come in and enjoy the sort of ideas that get executed in grander detail by the other games. Honestly, I take back what I said earlier: if I can drop ten bucks to be horribly disappointed for three hours by Downsizing, I can drop ten bucks for a game that’s pretty fun for a couple hours instead.

No bones about it: Skelly Selest is a great roguelite brawler and dungeon crawler, packing a ton into a tiny package.