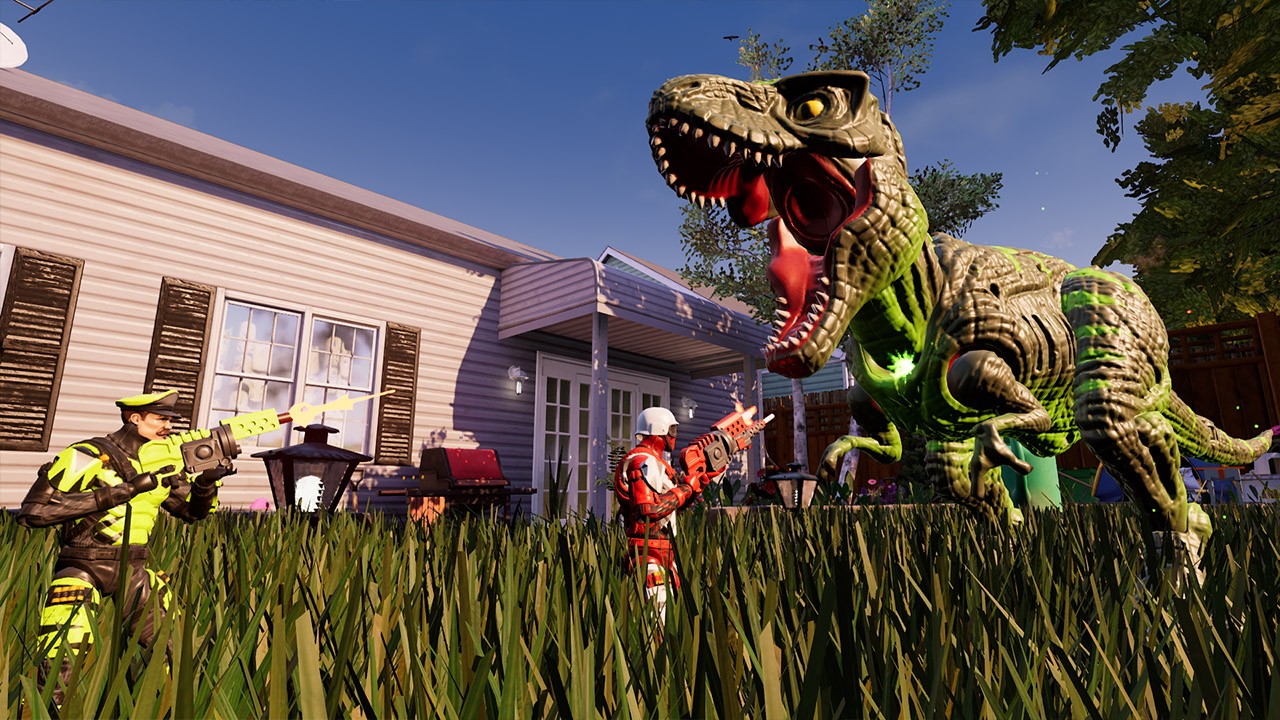 Did you ever play with action figures back when you were a kid, did you pretend to fight off some evil menace that only you could see, something that was all part of your imagination? Well, I’m hoping that I wasn’t the only one, or that would mean that I was already going crazy back then. In any case, if these thoughts resonate with you, then I’m sure that HYPERCHARGE: Unboxed will take you back in time.

So, what is it all about? HYPERCHARGE: Unboxed is a co-op FPS that mixes the classic experience of an FPS with the iconic Tower Defense formula, and it takes place in a world where you play as an action figure. The game supports co-op up to 4 players, either online or local co-op via split-screen. I know, when’s the last time that you’ve seen an FPS game, on PC, support split-screen? However, if you feel like blasting your friends, you can also do that in the game’s PvP mode.

Surprisingly, there’s no campaign, you just unlock maps as play along, but the maps are certainly quite something. Levels are just ordinary environments from the day-to-day life, a toy store, a kid’s bedroom, or even a garden, and while this might’ve been boring for some people in most cases, in HYPERCHARGE that certainly isn’t it. Thanks to the difference in size and the scale of things, the game forces players to traverse through the levels by jumping around furniture and fallen objects, thus adding precision platforming segments to this surprising mixture of FPS and Tower Defense. 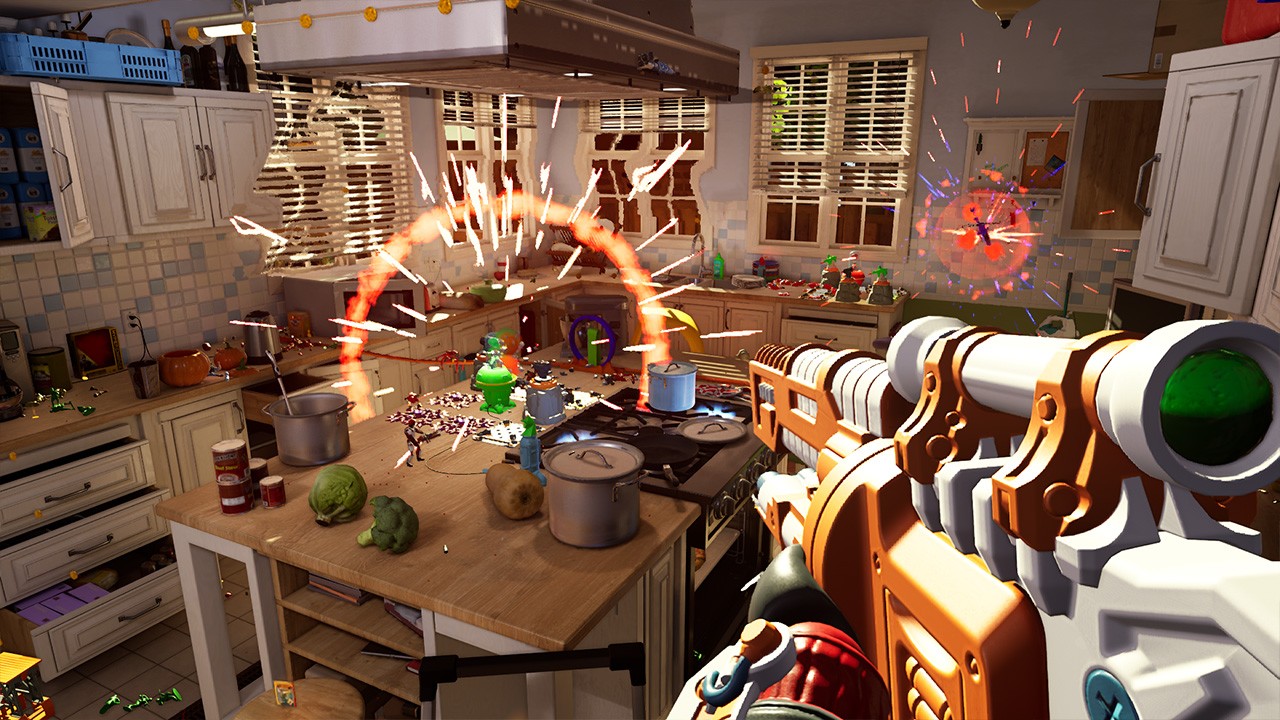 The objective in each level is to defend the various HYPER-CORES scattered throughout the maps, and depending on if you manage to save all of them, if you only lose one, or if they don’t take any damage, you’re then awarded a medal. To do so, you not only have to make use of your weapon, but you also have to look around for building credits so that you can then build defences in designated building spots to help you fend off the impending waves of all sorts of toys, ranging from Beyblades, soldiers, and even attack helicopters. There’s a decent variety of defences at your disposal, but you must first unlock them by completing certain milestones, like completing specific levels in certain difficulties or levelling up. Likewise, the same unlock system also works for cosmetics, which include skins and heads for your action figure and as well as for your weapon.

With that said, the game rewards exploration by placing building credits and batteries throughout the levels, and even hidden collectables in secret locations, so players are encouraged to explore between rounds. Spawns for building credits and weapons are random though, which can make things a bit more difficult for players given the fact that you have limited time between waves to build your defences, recharge the shield batteries of your HYPER-CORES, and to explore the level for more resources or any collectables that you might be missing.

If this game would’ve come out when I was a kid playing with green plastic soldiers, Action Man’s, and all other sorts of toys, I would’ve absolutely loved and I’m sure that I’d remember it for the rest of my life. Still, I still have those memories from my times as a child, and I’m sure that 10 years from now I’ll still remember HYPERCHARGE for what it is, a dream that probably many kids actually had, which was to be their favourite action figures, without having to play pretend or rely on your imagination. With HYPERCHARGE, you can experience it in such a great way. 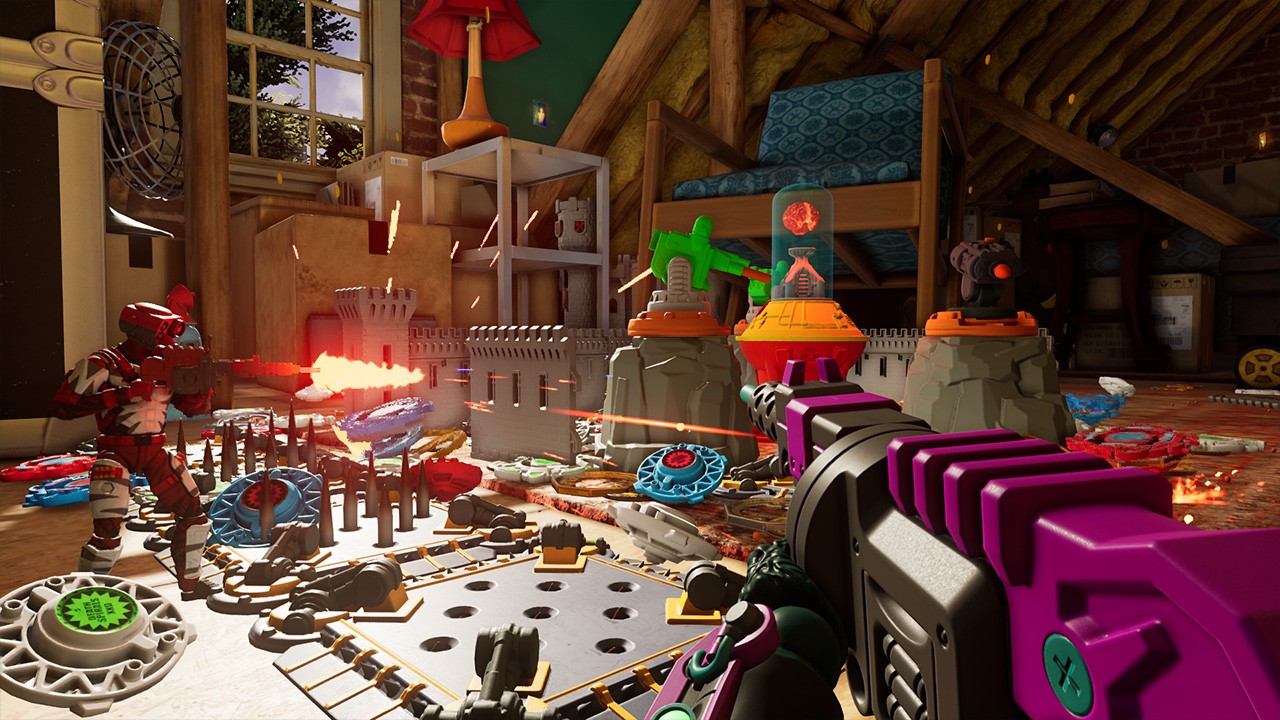 At the end of the day, the caveat here is that HYPERCHARGE is without a doubt a game that is best played with other people. Sadly, I don’t mean this in the sense that the game is best played in co-op, I say this because the game feels extremely unbalanced to play alone and even with two players on a higher difficulty. I’ve had a tough time finding people to play online, and after checking Steam Charts, the player base throughout the day seems to range from the 30’s up to the 100’s, so if you can convince one or more friends to jump along with you, I’m sure you’ll enjoy your time with it.

Nonetheless, after spending a few hours with the game, both in solo and in 2 player split-screen co-op, and as I’ve mentioned before, I really feel like the game was built from the ground up to be played by at least more than 2 people, and I’ve read that even 3 people can have trouble on the highest difficulty. While I’m sure that effort has been put into making the game accessible to sessions with fewer players, from my experience, I’d say that the game is lacking in balance even on the second easiest difficulty (out of four).

The truth is, if you’re planning on playing this alone, I’m afraid you’re in for quite a rough time, as the game is much more difficult, partially due to poor balancing in regards to enemy waves and building spots. Ultimately, HYPERCHARGE: Unboxed plays, feels, sounds and looks great, and I recommend it without any sort of hesitation, but only as long as you have a squad to bring along for the ride.

HYPERCHARGE: Unboxed plays, feels, sounds and looks great, and I recommend it without any sort of hesitation, but only as long as you have a squad to bring along for the ride.