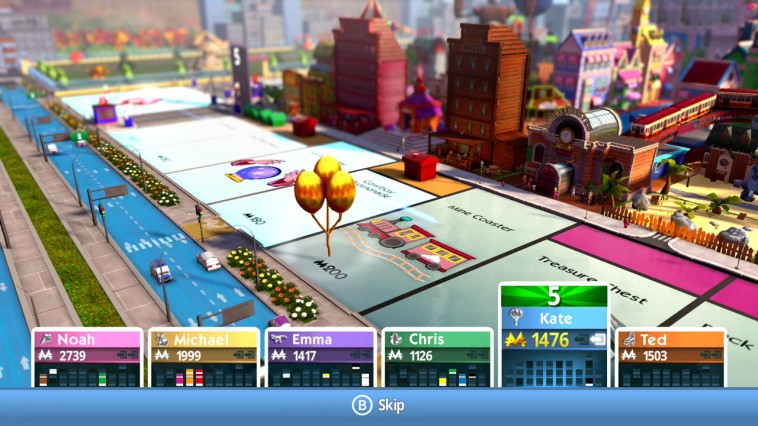 Ah, Monopoly. The classic board game, designed to teach people about the impending doom of capitalism, now marketed and produced in many languages across dozens of countries. A game that exists in flavors of Junior, Star Wars, Mario and just about every pop culture icon imaginable. And the only game besides Risk that can keep you awake for hours after you said you were done, and a game that’s caused nearly as many family skirmishes as Mario Party. Thank goodness, this game is now available on the Nintendo Switch.

First and foremost, I do want to address the loading issue. Ubisoft realizes there’s a loading issue, and even addresses it when you eventually get the game up and running. The first time I even tried to open Monopoly, it just sat at the loading screen for more than five minutes before I gave up and force quit. Turns out that’s exactly what you’re supposed to do. It’s not a great situation, and Ubisoft recognizes this. If this is a make or break for you, you might as well tune out now, because this is the last time I’m gonna bring it up this review. Unlike Moon Hunters, when Monopoly had the issue, it was gamebreaking, but it also didn’t occur every time. This was like spinning the worst roulette wheel ever, where winning meant I got to play Monopoly.

To its credit, Ubisoft’s digital version of the classic board game does its best to make things both exciting and new. There is the ability to play against multiple players, with the biggest restriction being how many controllers you have. If you only have one set of joycons, you can pass the controller between players, though this never seems like a convenient way to do things. From what I can tell, online play isn’t limited to any one format, but I honestly was unsuccessful in finding an online player to go against. That’s not Ubisoft’s fault, I have poor hours and no one wants to fight over Baltic Ave at 2 am.

Now, if you’ve never played Monopoly before, this is a weird place to come in, but let me bring you up to speed. The object of the game is to own everything, amass the most money, and literally bankrupt your opponents by creating monopolies of businesses and making rent exorbitant. It sounds pretty horrifying when you put pen to paper to try and describe it for someone who’s unfamiliar, but it’s a pretty fun game that’s created a lot of interesting variations in the past. Ubisoft has made a huge push here to make sure that the game is spectacularly more engaging than the board counterpart that you can easily pick up in any toy store or even supermarket. 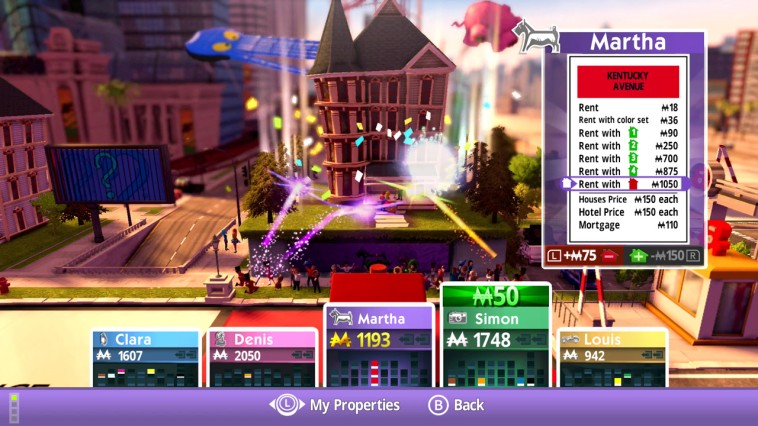 For one, you can decide between playing on plain, realistic boards that just emulate what the natural game brings, or you can do dynamic and spectacular live boards. Notice that I pluralized both instances of boards. That’s because Monopoly for Switch does offer choices even within these choices. The live boards feature a booming city, a haunted landscape and a more “country” type setting, whereas the classic boards are either the original Monopoly or a special Ubisoft Rabbids version, in which all the properties, cards and pieces have been augmented to fit the Rabbids theme. It’s fairly exciting, not only because it offers some good choices out the gate, but the obvious “DLC” cloud is hanging heavy in the air and I’d love to see future boards being added on.

Fans of the wheelbarrow and other classic pieces may be distraught to find out that Monopoly for Switch follows the current “newer” set, which means the car and the battleship are present, but the scotty dog and the thimble have been replaced by a dinosaur and a penguin. The crazy part is that there’s evidence right away that this doesn’t have to stay to just eight pieces: you can unlock an additional twelve through achievements. Yes, there are achievements in Monopoly. Things like “roll so many sixes” or “play so many games” will unlock additional pieces to help spruce up the game. Still not sure if I like this, but at least I don’t have to pay extra. Also, it adds incentive to actually try out the different modes of gameplay. And there are several.

So, gameplay modes. This is something that’s going to make or break the purchase for a lot of players. First and foremost, you don’t have to play any other style other than the original version of Monopoly if you don’t want to, but I argue it’s a wasted opportunity to not try out different versions. There’s the card mode that allows you to set goals for how to win instead of the normal version. If you’ve ever played Monopoly vanilla, you know that it can literally take hours to drive a particularly stubborn foe into the ground. The card mode does offer a faster alternative, with goalposts like “be the first to build a hotel” or “first to amass 2000 dollars” a good target that takes less than an hour. On the other hand, such a variation does make the game feel less authentic, but whatever.

If you’re a stickler to making it so Free Parking is a treasure trove (or that jail is a great place to visit), the House Rules version allows you to change up how the game is played to a point. You can’t go hog wild, which makes it less like House Rules in my neighborhood (land on Boardwalk, give everyone fifty dollars). The inclusion and the tweaking is fun, though, so I appreciate the thought. 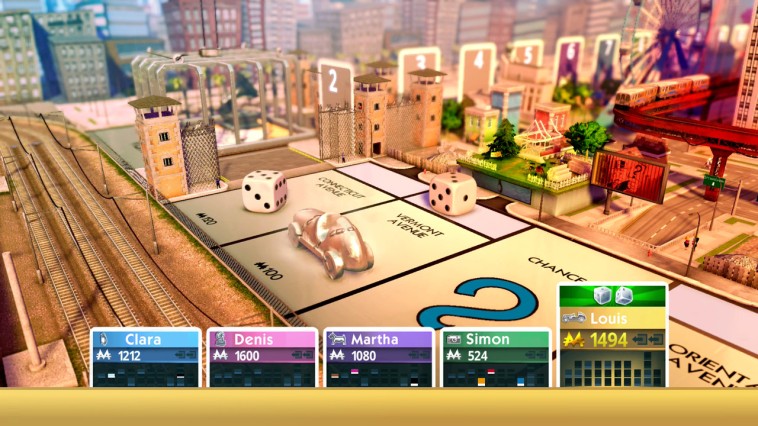 Lastly, speed dice. This was confusing to say the least. After about five turns, a mysterious red dice enters each roll and I still haven’t figured out everything it did. Sometimes it added to my total. Sometimes I can decide how much I move. Once or twice I think I just zipped around the board arbitrarily. I rolled three of the same number and got to teleport anywhere I desired, much to my opponent’s total annoyance. I think speed dice is meant to shake up the game and make it go faster, but it just added an element of chaos that threw everyone into a bad mood. I don’t recommend it.

I do, however, recommend muting the damn volume. The voice over commentary is ok, but the music is repetitive, saccharine and eats out your frontal lobe. I had a headache by the end of my first game because the same jaunty tune kept blaring on a loop. Not anyone’s particular fault, but I think that board games and puzzle games both pull from the same pool of generic background music in order to justify having sound without actually putting in any work.

In the end, Ubisoft owns the rights to put Monopoly onto any console, and I appreciate that they brought it to the Switch. I think, for many people, the old fashioned pieces and board are still the best, but you can’t dismiss the level of detail or additional features that Ubisoft baked in, and I quite like a lot of them. I have fingers crossed that, with franchising going the way it is, Nintendo will consent to a full on Mario board in the future (or, gasp, Splatoon). Plus, I can’t think of a better way to play Monopoly than online, far away from people who flip boards when they get a bad roll. There’s no replacing the classics, but, in this case, Monopoly for Switch does a fine job paying homage.