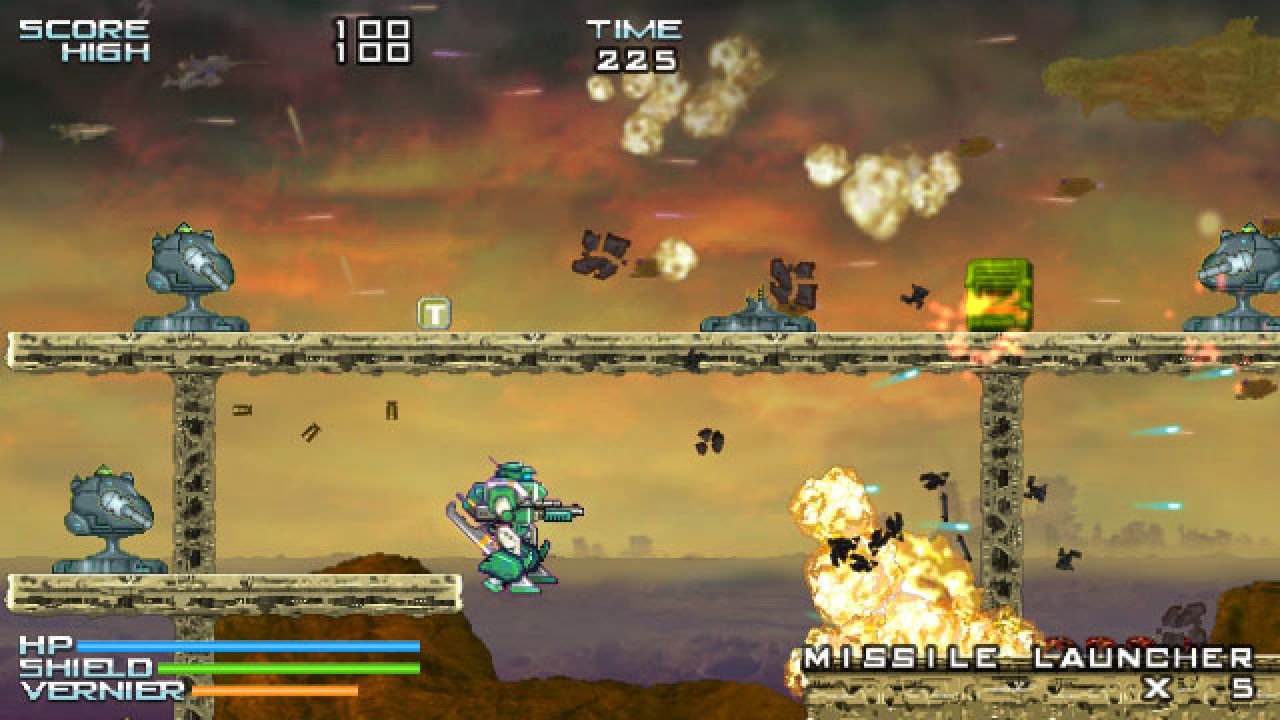 Astro Port is a fairly well known Japanese indie developer who have some pretty clear mission statements. Firstly, they unabashedly love oldschool games. Anything that’s from the 8 or 16 bit era (16 especially) are gospel, and they seek to emulate the games and their feelings through their new creations and developments. I have a soft spot for Japanese indies: I’ve met several developers, spent a lot of time at BitSummit in the past, and always made my rounds at the indie hall for the Tokyo Game Show. There’s usually an elemental enjoyment to games from Japan that I find is part of my bread and butter, so it makes sense for me to take a swing at some of Astro Port’s titles. In anticipation of their upcoming SHMUP Collection, I’ve opened up their back catalog of Switch releases to drink them in at a sprint. The results have been interesting, to say the very least, but, sadly, not as satisfying as I’d like.

Gigantic Army was a difficult game from the very beginning, and I mean the second I booted it up. There was this ungodly, grating noise that was supposed to simulate a futuristic, apocalyptic event, and it set me up poorly from the start. What was most bizarre is that the menu was a bit quiet after that: I imagine the intended effect was to create something of desolation or separation, but it just came across as odd. Gigantic Army is heavily influenced and inspired by the war-torn future titles of the SNES and Genesis era, evoking a lot of memories of games that might not have been a huge success in the West (such as Cybernator and Metal Warriors), but are clearly at the forefront of Astro Port’s hearts and minds. In Gigantic Army, you play a pilot of the giant space suit GMR-34 SALADIN, fighting against the invading alien army of the Ramulons. While this sounds like a straightforward enough idea, Astro Port makes a point to inject a ton of exposition between stages in the forms of communication missives between the home base and the SALADIN pilot. It’s interesting, and a level of detail that you wouldn’t have expected on a game that could honestly just drop you into the thick and call it a day. 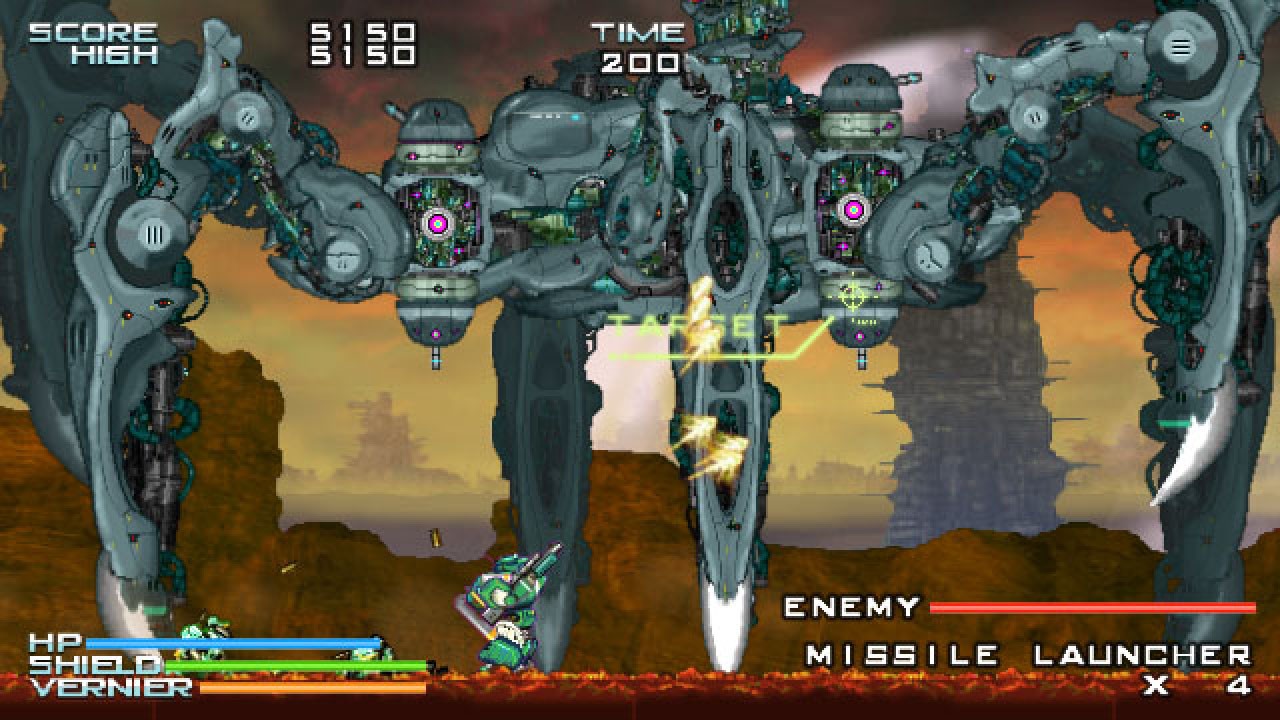 The 16 bit appearance is nailed by Astro Port, as Gigantic Army immediately gave me flashbacks of Super C and other gritty gunning titles of my childhood. Everything, from the collapsing cement girders to the insectoid robots of the Ramulons evoked the proper atmosphere and feeling. To the game’s credit, there is a pitch perfect imitation of what was important and mattered in games such as these for the time. You’ve got a bevy of monster-like bad guys to shoot at without caring or needing to know further details about them. You’ve got a small variety of weapons and sub weapons that you can choose at the start of the game, each offering some kind of advantage and disadvantage that balance each other out (with the exception of the Beam Cannon secondary weapon, which is badass regardless of your thoughts). You fight through the waves of baddies, you have a couple smaller mini bosses that have health meters, and then the larger-than-life stage bosses have weak points where you need to shoot at and nothing else.

In practice, Gigantic Army achieves all of its goals with spectacular success. You don’t muddle the formula too much by having a massive amount of variety or variables to consider. You’ve got the three basic weapons that all have different spread patterns and range, and they get powered up as long as you get the “Power Up” items that are in crates throughout the level. You also need to get the timer power ups, because, if you don’t, you’re guaranteed to time out and get the most humiliating game over possible. That was sort of an interesting aspect: even though I was focusing on survival and shooting as many Ramulons as I could, it was more important that I take a couple of seconds to loot every single box to keep up my clock count. One time I didn’t and nearly zeroed out, finishing the final boss with only eight seconds left. That was enough to keep me collecting even though I didn’t really care for it, but it wasn’t a big deal: aside from the bosses, the grunt enemies were simple enough to take care of. Hell, I welcomed when the mini bosses arrived and I needed to actually work on my hover jumping (you have a rechargeable jetpack for temporary suspension) and it added some challenge that actually surpassed the boss fights. 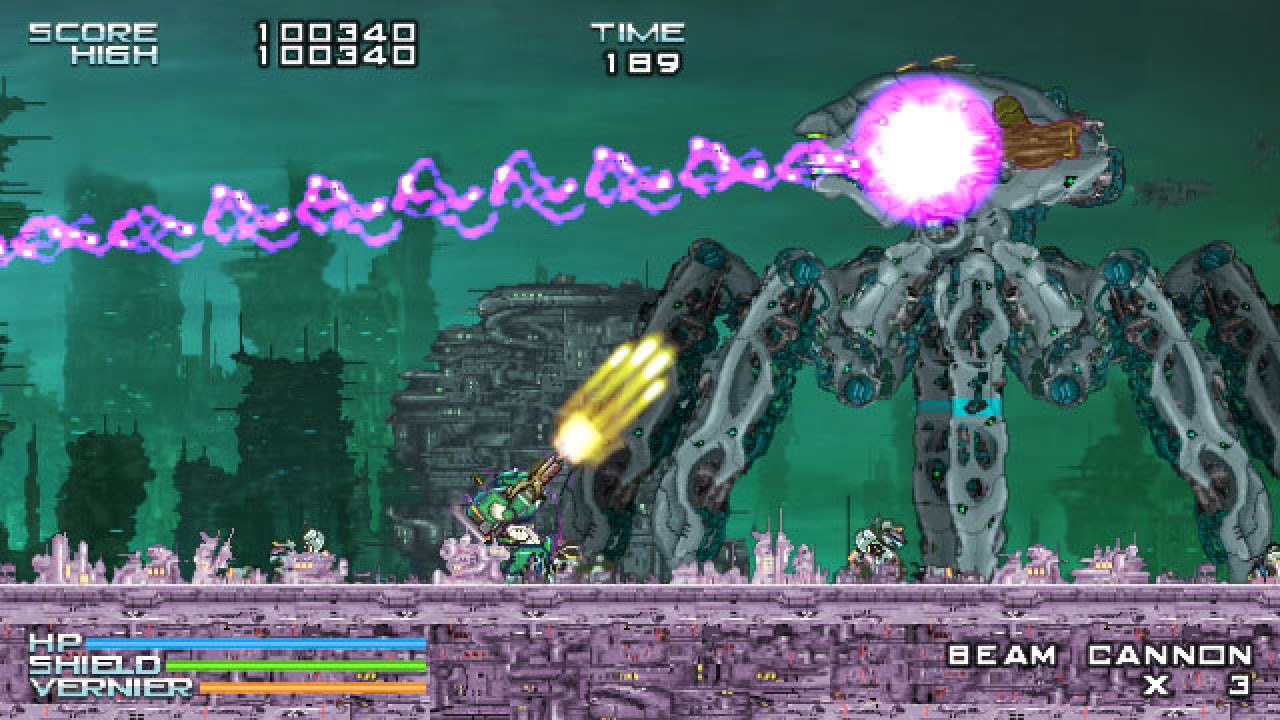 Once you get into the execution of Gigantic Army, though, things fall apart. The button mapping and the way input works automatically hamstrings any real feeling of forward momentum. The left stick allows for movement and aiming, but you need the right stick to finely aim at enemies above you, which is a major part of the firefighting. However, you can’t move forward and aim at the same time, forcing you to come to a standstill and align before continuing on. Additionally, the fire button, instead of intuitively being at the left or right shoulder, is firmly set at “Y”, meaning you have to really contort your hands and hold the Switch in a bizarre way in order to make the job successful. Once you reposition your hands, though, muscle memory goes wild and you end up throwing up a shield continually instead of jumping, which lead to a lot of damage being taken that wasn’t needed. Plus I fired off my secondary weapon without needing to, and, given that you have limited charges per stage, it was a bit frustrating to waste my beam cannon on basically nothing.

The remaining points of Gigantic Army fall into a sort of chasm of “eh.” The music does exist, and it captures the feel of a 16 bit destruction soundtrack, but it’s neither memorable nor necessary. The bosses are large but repetitive in nature: once you figure out the basic attack and movement patterns, you just need to patiently repeat actions until they fall. There are some impressive looking effects, however, and I do commend Astro Port for the visual stimulation of the entire thing. The game isn’t particularly long (six stages will get you just about an hour of gameplay), though running through the difficulty settings will add to replay. However, I should note (and I’m not an expert) that the higher difficulties are more boss damage and fewer crates, and that last one might just be my imagination. It’s a decent price, and it gets the job done, but it won’t sit on my front screen as a naturally recurring replay title. Gigantic Army is fun enough (especially if you use the Switch menu to remap the keys), but just know what you’re getting into before you take the dive.

Gigantic Army is fun enough (especially if you use the Switch menu to remap the keys), but just know what you’re getting into before you take the dive.