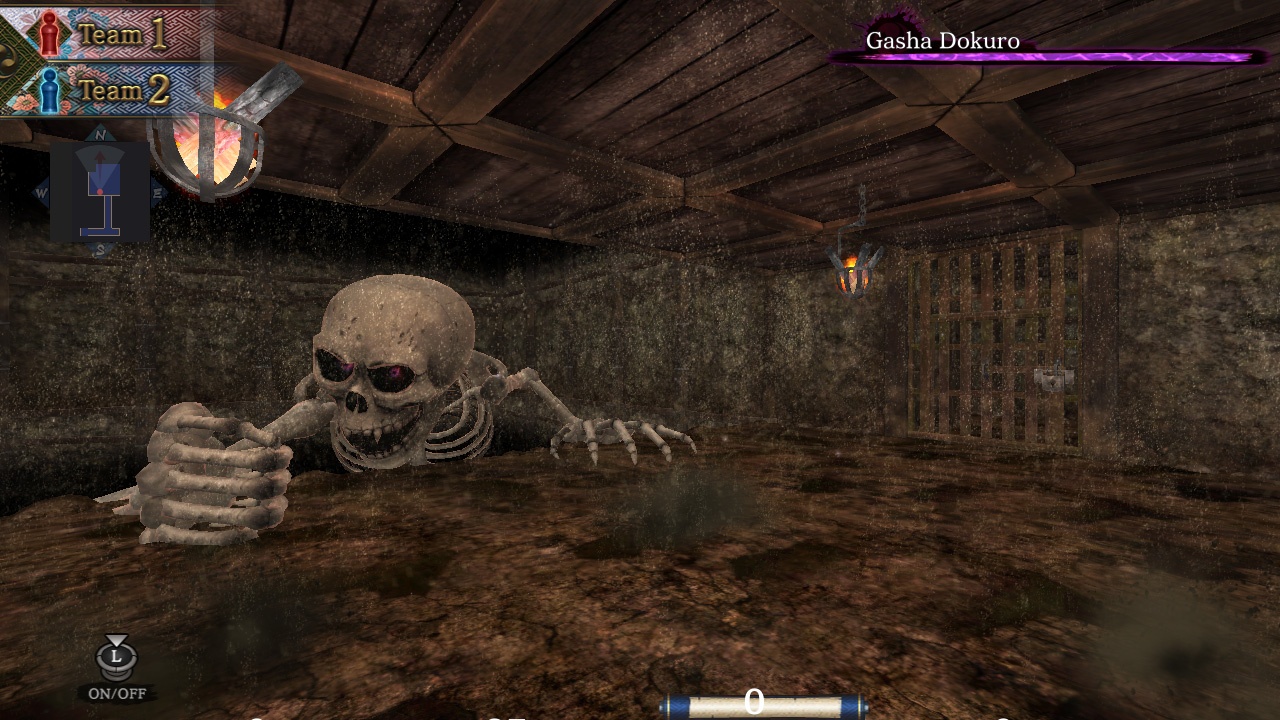 Haunted Dungeons: Hyakki Castle is a grid dungeon crawler/Japanese “yokai” castle-maze adventure inspired by the real-time first person dungeon RPGs of the 1980s. The job of the player is to infiltrate the mysterious Hyakki Castle that has appeared in a land of exiles as part of a secret anti-supernatural government group and to defeat its master Kigata Doman, the alleged killer that has threatened to take the Shogunate’s life.

After the story styled in beautiful traditional Japanese paintings come to a close, your adventure begins. The game allows you to choose your own difficulty, as well as style your own set of warriors you choose to take with you to aid in your quest to kill the Kigata Doman. The game also lets you choose between a picture for your character from a handful of designs as well as race and class. What’s also cool is that you combine classes to make a character and even reuse your class combinations if you so choose or create totally different class combos for each of your two allotted teams. Though all of this isn’t really necessary for a first person game, the attention to detail to make this game more immersive is a plus. 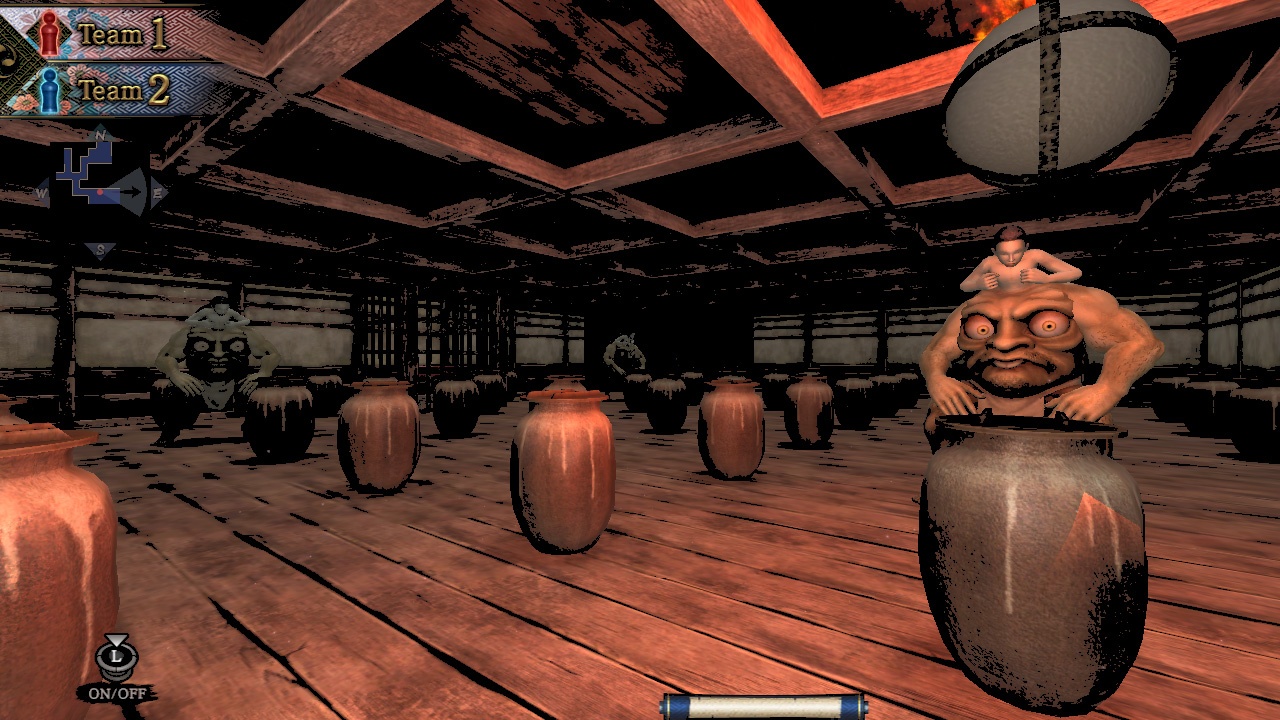 What’s even more interesting about the Haunted Dungeon’s character creator is the ability to even name your warriors. As with any RPG, what type or class, race, or attacks you choose for your characters will also affect your game. Each character and class has its very own skill trees similar to other RPG’s with four slots to use per character. While it may seem like there is far too little spaces to really utilize your characters abilities, there is a cool swap out feature that allows you to change between move sets allowing for a more user-friendly combat system for each of your four characters. This swapping option is also helpful in terms taking down enemies faster, especially in boss fights.

Haunted Dungeons play style comes off as very linear, where the player is only allowed to move in four directions and it only allotted to move one space at a time due to it’s grid styled nature. Though it seems like this would lead to a rather clunky and limited control scheme, it runs surprisingly well. The only downside is that the game does not allow you to block in battle situations, but these aren’t exactly deal breakers here.

What sets Haunted Dungeons apart from all of it’s other predecessors is the split screen function. This allows players to put their four characters into teams, with first and second characters being on the left of the screen and third and fourth characters designated to the right hand part of the screen. Touching on what was mentioned earlier, this helps out a lot with puzzles and traps that riddled throughout the game, which adds more depth and enjoyment to the game as a whole. This also helps in terms of a quick interface, as you don’t have to waste time going through tons of menus, with just one click of the L2 button , it’s already done for you. 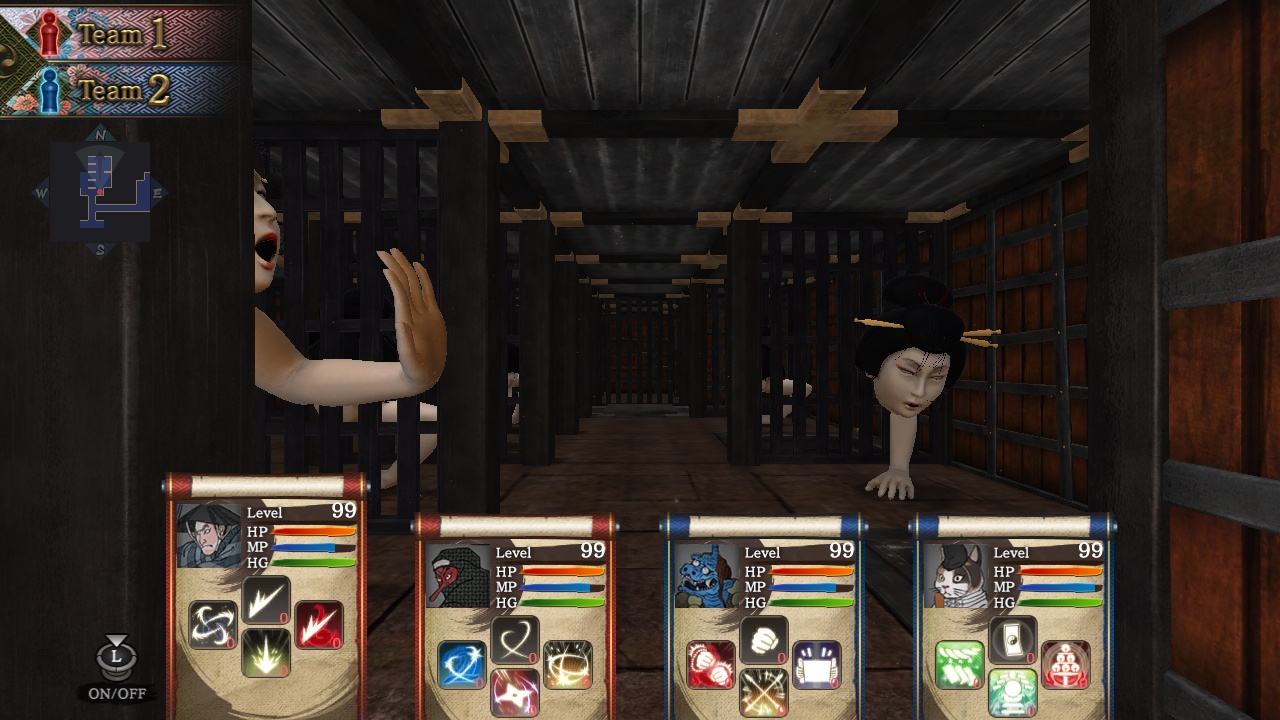 Besides the management of characters, players must delegate time to health, mana, and hunger meters. All of these are very important as health depletes in battles as well as mana, while the hunger meter needs to always be filled to present the best possible outcomes in your dungeon success. While this is pretty cool in terms of adding more engrossing gameplay, there isn’t enough food most of the time to feed your teams, so all of this has to be done rather strategically as the meters drop way too fast to keep up with your food supply. This isn’t the most terrible thing in the world, but it is something the developers should probably fine tune more, as it can be a tad bit annoying as the game progresses onward.

Overall, Haunted Dungeons: Hyakki Castle isn’t a bad dungeon crawler at all. It’s original in terms of story as well as game play. While some of the enemies can get a bit repetitive as well as the lack of scenery and atmospheric sound in the game, it is barely noticeable once the player really gets into the combat aspect of the game.