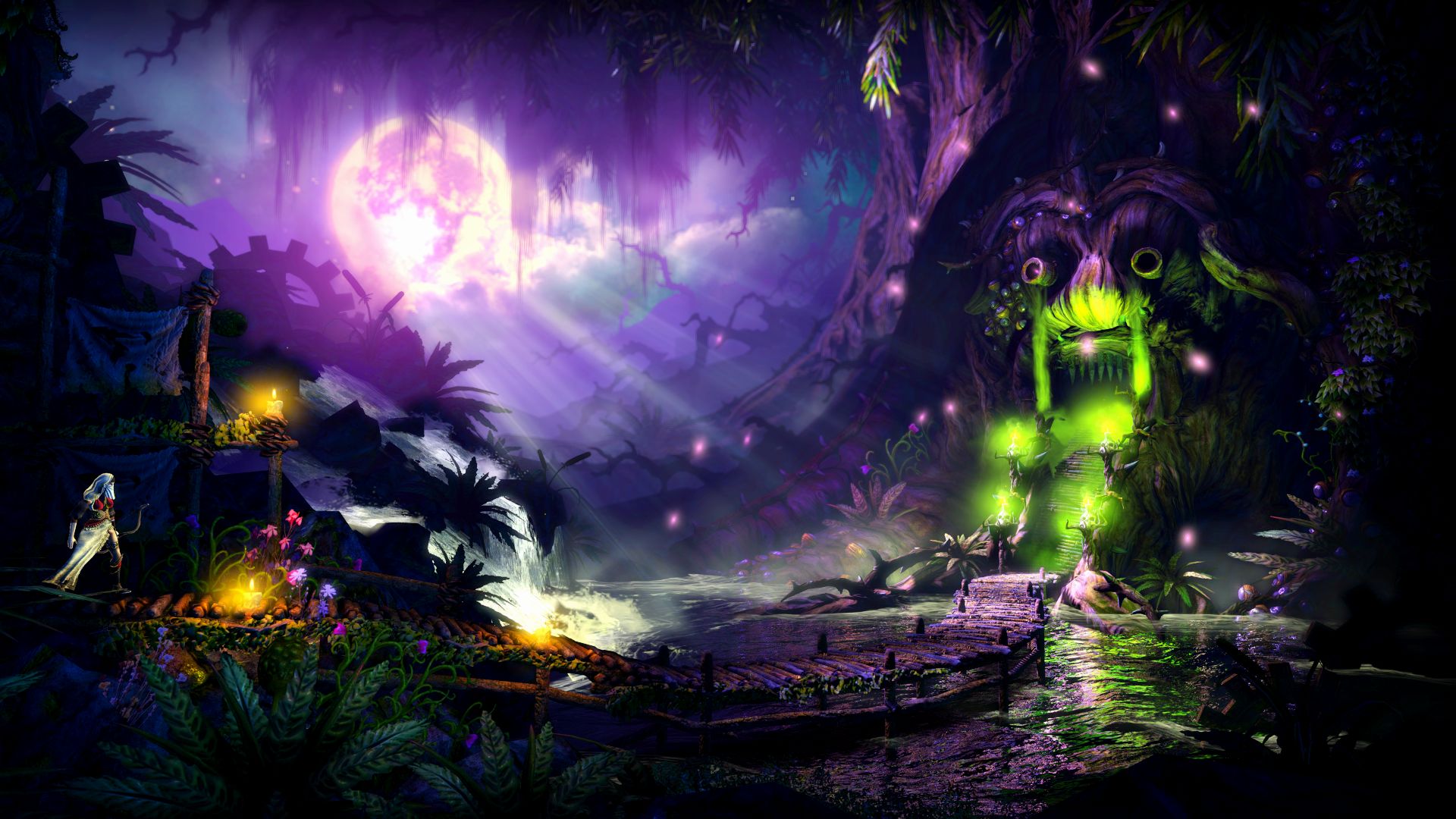 Anyone who was in the Nintendo camp during the last console generation would have missed out on one of the most stunningly beautiful platform puzzle games developed in recent years. However, good things come to those who wait and as such ‘Trine 2: Director’s Cut’ (exclusive for WiiU) takes Frozenbyte’s classic adventure title ‘Trine 2’, adds some enhanced controls, a large expansion quest named ‘Goblin Menace’ and if you’re extremely good you can unlock a Nintendo exclusive chapter entitled ‘The Dwarven Caverns’.

The story of Trine 2: The Director’s Cut revolves around three characters. You start the game as Amadeus, a wizard who has the power to move object and create boxes & planks using his magic. The second playable character you encounter is Pontius the knight, who is the best character when it comes to combat. Last but not least is Zoya the thief, who has amazing dexterity, a grappling rope and archery skills. The team are summoned together by a mysterious artifact known as ‘The Trine’ which guides them through the overgrown forest to discover the dangers that are threatening the kingdom.

The focus of this game is to find solutions to a gauntlet of physics based puzzles in order to create a safe passage for your team to progress. These usually involve using the team’s mix of abilities to manipulate the landscape and surrounding apparatus to bypass obstacles and perils. The apparatus you’ll encounter scattered throughout the chapters include such things as leavers, boulders, seesaws, rope pulleys, steam pipes and the like.

The first thing you’ll notice when you start Trine 2: The Director’s Cut is just how beautiful the graphics are. This game looks gorgeous. I try to keep things in perspective when it comes to video games but I doubt many would disagree when I say that visibly this game is a work or art. The locations are full of colour, depth, texture and tone. The graphics immerse you into an enchanted fantasy world reminiscent of a fairy tale. Later chapters in this game not only look stunning but transcend in theme as you play them. For example, although a chapter may begin in bright & sunny beach setting, you may end the same chapter in a dark & dingy castle on a stormy night. I can’t emphasis enough how good this game looks. I actually think this version looks a little better than the original. I personally love how the interactive title screen in the director’s cut is set in a purple dusk rather than bright daylight.

The graphics and the game play integrate beautifully with each other. One of the mechanics you’ll encounter early on is the magical water which can be used help plants and vegetation grow. Once fully grown they produce leaves which has be used as ledges for the team to climb up. It’s wonderful to watch the background scenery change into elements that you can interact with.

The sound in this game is very fitting a mixture of sensual sultry music for the puzzle segments & more upbeat action pieces for the battle scenes. The main theme which plays throughout the game really sticks in the mind and offers a lot of character to the game. 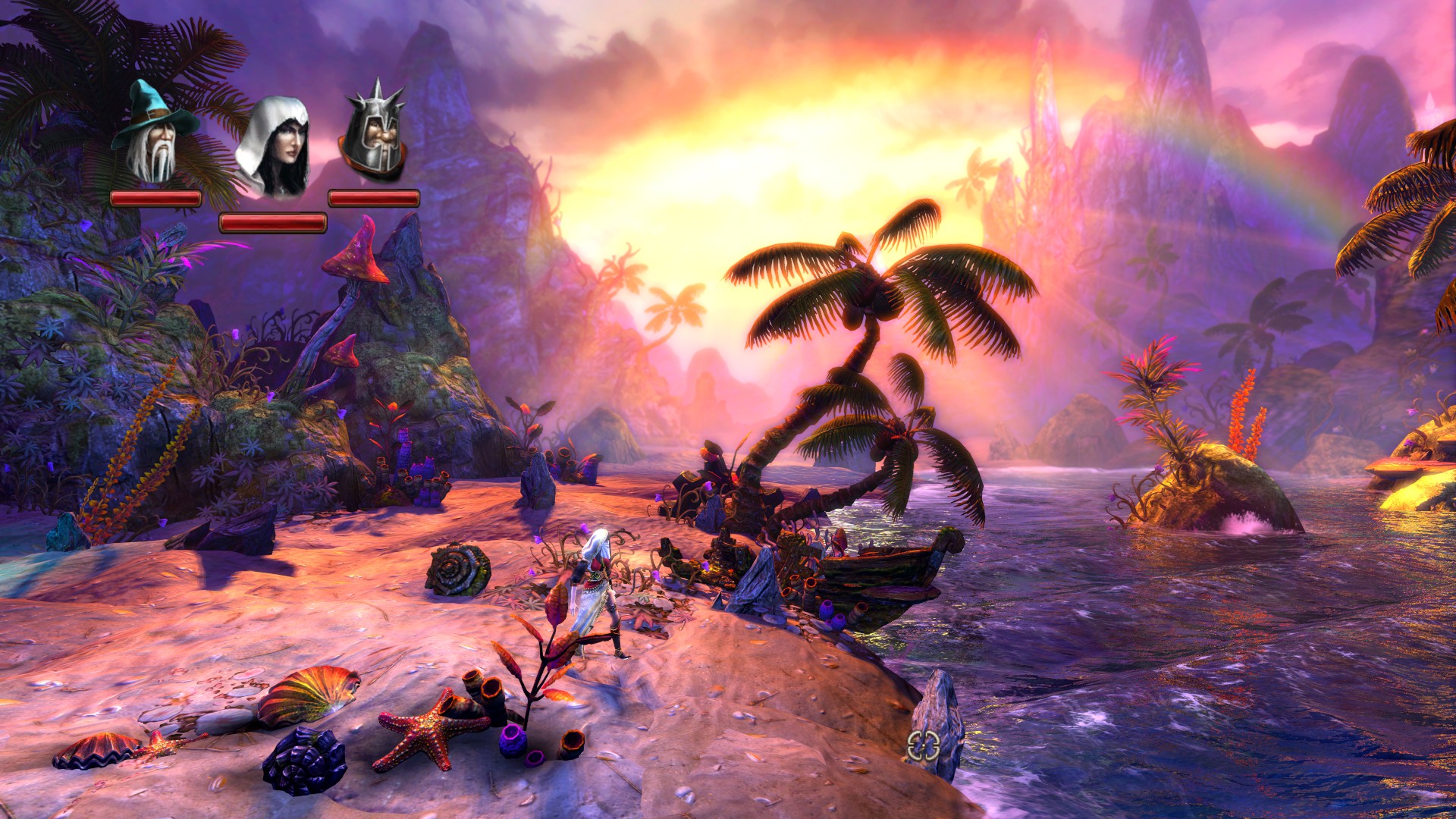 Since there are three separate characters with individual skill sets there is quite a bit to remember when it comes to controls. The WiiU game pad is compulsory whether you are playing a single or multiplayer quest. As a result player one not only has the option of playing the game with the regular twin analogue controls, but can also take advantage of the touch pad for improved aim. It can also be used to draw new objects onto the screen and move around existing ones. Personally when I was playing I chose not to use the touch pad as it would have involved gripping a stylus in one hand while trying to operate the left analogue stick in the other. Personally I was completely satisfied with the twin stick controls. For additional players there is a wide variety of control options available including Wii Remotes & Nunchuks, Wii Classic Controllers or WiiU Pro Controllers, so you’re free to use whichever method of control you feel most comfortable with. Personally I was a bit annoyed that I couldn’t use the Pro-Controller in the single player mode since I wasn’t using the touch pad anyway.

There are some unusual design choices in Trine 2, the strangest being that the puzzles are by no means fool proof and as such are very easy to break. As a result a lot of the time I felt a bit unsatisfied with how I progressed through the game as I frequently felt robbed of any sort of victory.Another strange design choice is the upgrade system which is unlike anything I’ve ever experienced in a game before. Throughout your adventure you’ll find orbs and potions which give you experience points. These points can be used to buy skills for your characters which can assist you in combat or help you deal with puzzles in new ways. What is strange about this system is that there are a lot of different skills to buy and if you haven’t purchased particular ones by the time you reach certain puzzles you can end up getting stuck. The way you can resolve this problem is by selling skills you have already purchased and exchanging the points for new ones. The fact that you can swap skills around makes the system a bit redundant and when you have to keep on doing this as you encounter new problems to solve it becomes a bit annoying.

The combat in this game can be fun and many of the fights you run into are not particularly difficult to win, with the exception of a few troublesome bosses. Along the path you’ll encounter many hostile creatures (mainly goblins and giant spiders) and these segments help to put some breathing space between the puzzles. It’s worth noting however that one thing I really didn’t enjoy were some of the creatures that could destroy you in one hit. I don’t want to spoil anything but the flesh eating plants around the middle of the game were not a welcome addition as far as I was concerned. They were extremely frustrating.

Trine 2: The director’s cut really is a joy to play, initially in any case. However as the game is so heavily focused on puzzle solving I did find it a bit draining and as a result I couldn’t play it for too long in any one sitting. Also since I was focusing too much on progression over exploring I did find myself tackling the harder stages with an insufficient amount skill points. My advice to anyone who decides to play this game is to take it slowly, carefully and try to gain as many experience points in each stage as you can. 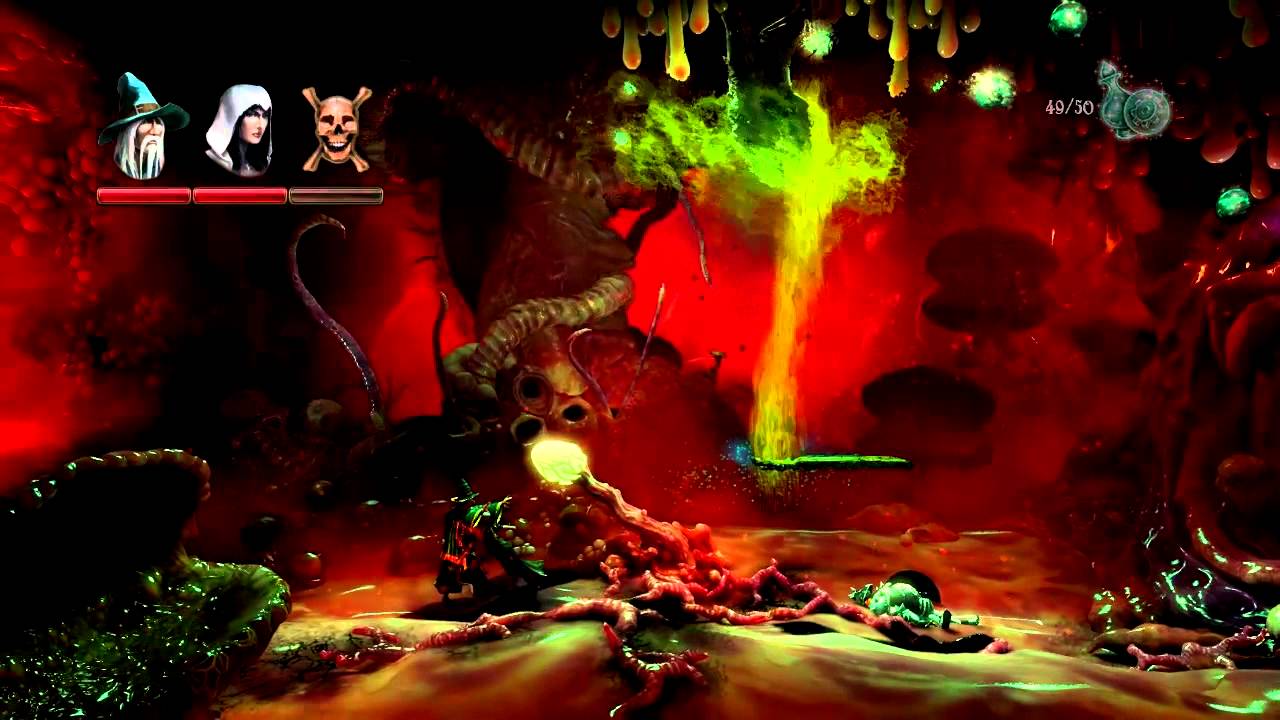 Included as standard in the Director’s Cut is the additional ‘Goblin Menace’ campaign. This can only be accessed after beating the main campaign however it is definitely worth beating the game for. The Goblin Menace contains six additional chapters and unbelievably the graphics are actually better here than in the main campaign. This sequence includes stunning fully rendered 3D cut scenes that segue into the game play seamlessly and each chapter is set in a brand new unique location. There is a stage set in the adventurer’s home town which is crammed full of detail, a desert sequence, and amongst the most harrowing is a stage set inside a giant creature which looks far too convincing for my liking.

Exclusive to the WiiU version are the map pieces cunningly hidden within the Goblin Menace quest. If you are clever enough to find all of them then you will be able to access one last adventure which takes place after the finale. This is a quest into the Dwarven Caverns where our hero’s have to navigate through a dangerous fire filled location in search of a dwarven treasure. It’s very difficult to get to but feels extremely rewarding once you are there.

Trine 2: The Directors Cut has three levels of difficulty. I was playing on the normal setting and although I progressed through the majority of the game at a steady pace I did get caught out on a few puzzles and the last three or four chapters were immensely difficult compared to the rest of the game. I also got the impression that the chapters got far longer towards the end. It’s probably technically possible to run through this game in a few hours, however for anyone new to Trine 2 the chances of being able to do that are extremely slim. As there is a lot of benefit from exploring stages thoroughly, coupled with the fact that the game looks as good as it does I would recommend playing the game slowly and savouring the experience. Take a few days over this game, better still put aside a couple of weeks and do a few of chapters at a time when you’re feeling adventurous. I genuinely believe you’ll make the most of this game by playing it at a good pace rather than making any attempt to beat it in a single sitting.

Usually when I rate a game I do try to consider the overall package, but I do base a lot of my judgement predominantly on the game play aspects. If I was to rate Trine 2: The Directors Cut on the merit of game play alone I’d give it a 7 out of 10, however as it’s so breathtaking to look at I will happily up my rating to 8 out of 10. It’s not a perfect game but I believe every gamer owes it to themselves to experience it firsthand. Enjoy.