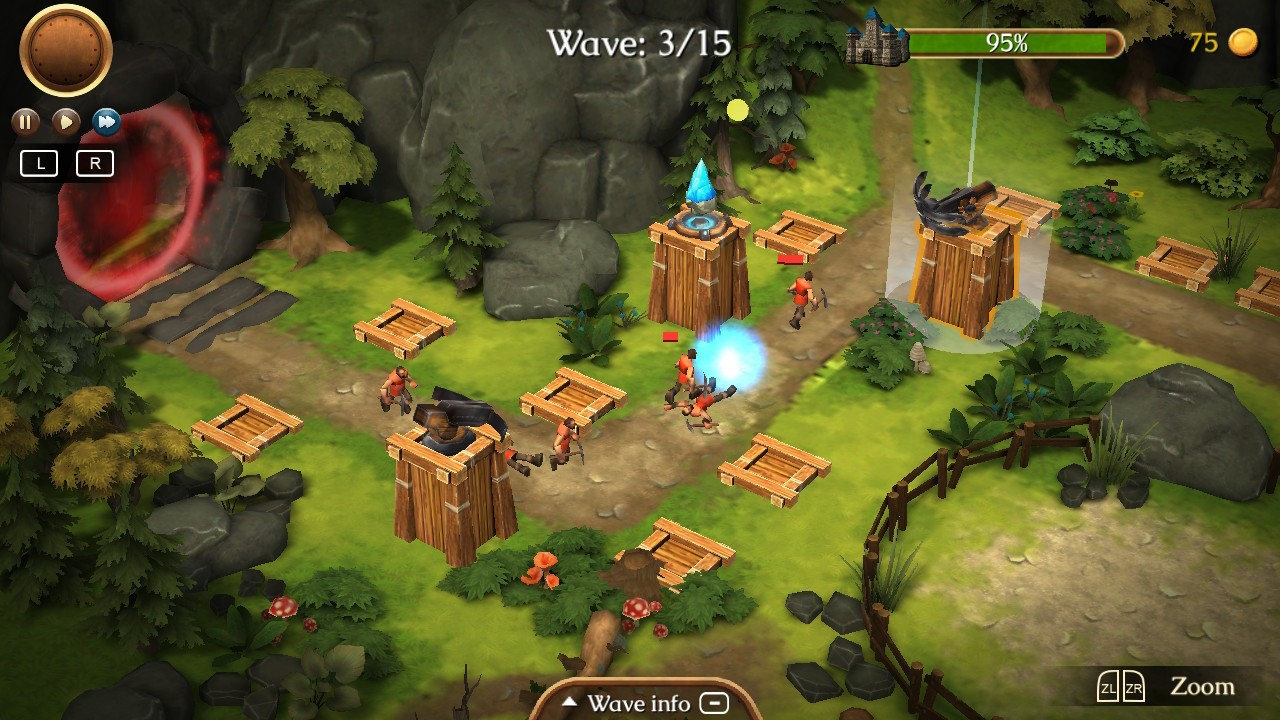 There’s a bit of a deluge of tower defence/medieval strategy games on the Nintendo Switch of late, and I’m for sure not complaining, and slightly in my element. Each title attempts to inject their own stamp on the genre with a few gimmicks, or bells and whistles, and Battle of Kings is no different. The standout mechanic in this game has to be the speed: it’s fast.

Like most tower defence games, you have allocated places to put your towers and are restricted to the types that you can build and can only unlock new buildings or upgrades by completing each consecutive level. From the outset, Battle of Kings throws everything at you and sets the tone for the rest of the game. Money, as always, is sparse, so you build up arrow-based towers as the cheap and cheerful solution, but the numbers game doesn’t work here, and variety is the spice of life. Because of the speed that units come through, you need to be able to slow them down with barricades, a variety of tower units that do precision and spread damage, as well as the classic ice tower which plays a pivotal role in the game.

The campaign takes place over several islands, each with their own theme, but essentially the same gameplay. You’ll get a short-timer to set up your towers, and then the enemies will appear through a portal. Rather than being represented by hearts or units, each time an enemy gets through your defence, it will take a percentage off. Get to 0%, and it’s game over. 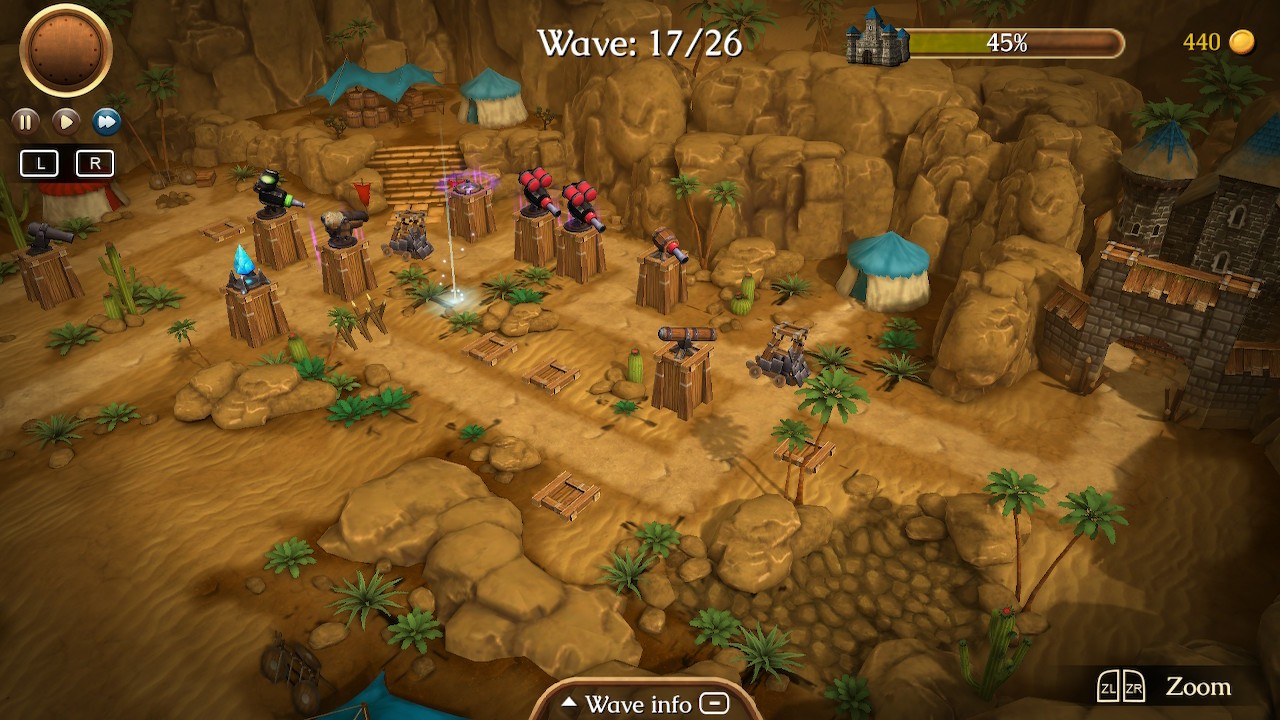 Getting a 100% is a challenge, even in the early stages, and the towers are often underpowered, and the enemies move too quick. Despite there being the option to speed the game up, it’s highly unlikely you’ll use the option. I managed to get to about three waves away from getting a perfect so triggered the increased tempo, but for some unexplainable reason, a weak unit managed to get through, and by that time, I’d lost the desire to replay the stage.

Controlling the on-screen cursor isn’t too bad, and the zooming functions allow you to get in pretty close to the action. Alas, it’s so fast-moving that you can’t appreciate what’s happening, nor can you relish in overpowering the enemy – it’s just not possible. In similar titles, you might build lots of cheap units and then strategically upgrade essential towers to your advantage.

However, in Battle of Kings, you must upgrade every single tower as swiftly as possible as there’s no chance of survival. Well, there is, but you’ll be cutting it fine. On this basis, it doesn’t have the same enjoyment as its peers as there’s not enough time to plan and then watch your strategy unfold. Instead, it’s a mad scramble to build at every opportunity where you earn coin, rinse and repeat. 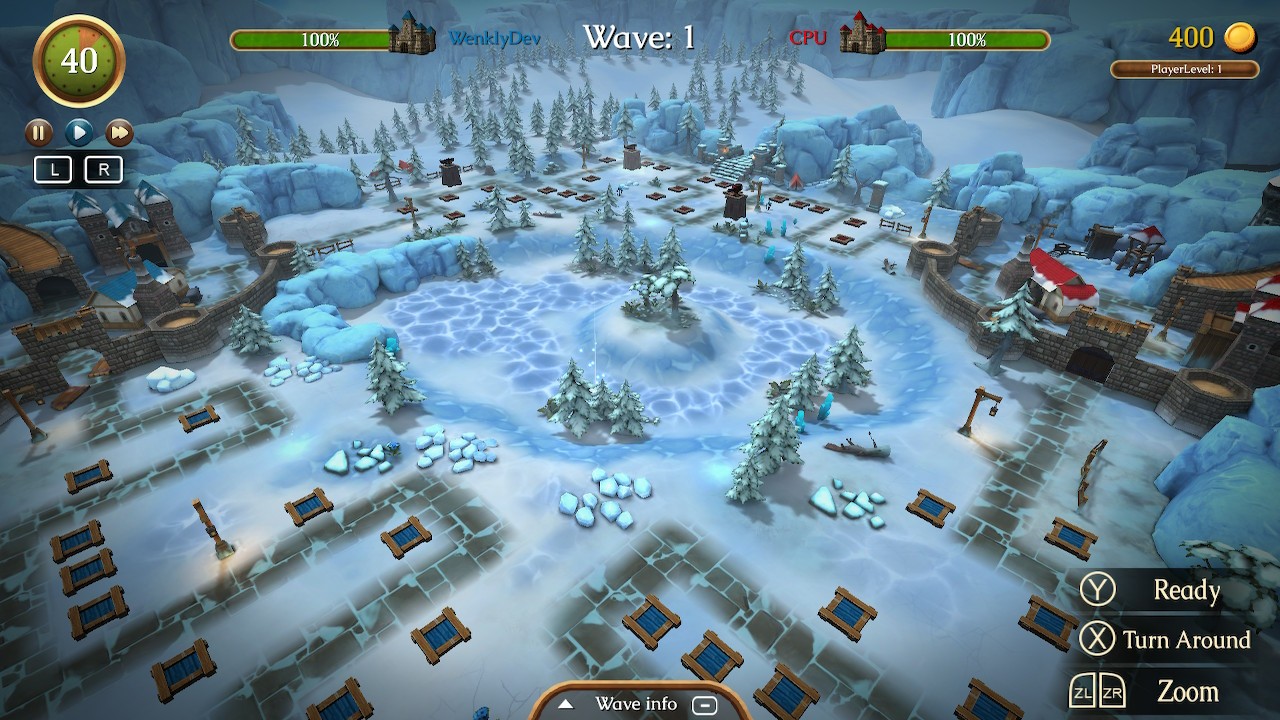 Going back to adding their stamp on the game, the developers included a final stage for each area that pits you against the enemy with your own troops. In one corner, you have your base, on the opposite, the enemy, and you take turns in sending an army through to lower their health. For the defending team, you rely on your towers once again as the troops attempt to storm your castle. The tower side of things is self-explanatory as it’s the same as every other level, but for the attack mode of things, you have access to a list of units, each with their strengths and price. Each wave improves your level, and you can gradually train individual units, then send them out, hoping for the best.

To say these sections are tricky is an understatement as it starts with the AI throwing infantry at you, but by the third wave, you have stronger soldiers, and despite an array of arrows and cannons, almost a third get through each time. Likewise, sending your own troops will get them gunned down early on, and the game isn’t sudden death. In other words, if you manage to get the enemy down to zero health, they still get their turn, and if they destroy your base, it’s a draw. I know this first hand as I promptly quit for the day when this happened. It was too much of a chore.

While Battle of Kings is one of the better-looking games in the genre with decent zooming features to get in on the action, the speed is too much to enjoy it, and even if you’re reserved in thinking, you won’t get a 100% in a stage, the repetitive element means it isn’t as enjoyable as a game such as Kingdom Rush or Sleep Attack. Having a boss stage where the tables turn and you can send off your own troops is a good feature, but again, the towers are underpowered, it’s a little too fast and paranoid as it may seem and a somewhat excuse, it the battles feel a bit biased in favour of the AI.

A nice looking tower defence game that is a lot faster than its peers, Battle of Kings proves to be a bit more of a challenge than it should be and because of the somewhat unforgiving AI, it’s quite tempting to bail on it; otherwise, it did show a lot of potential.