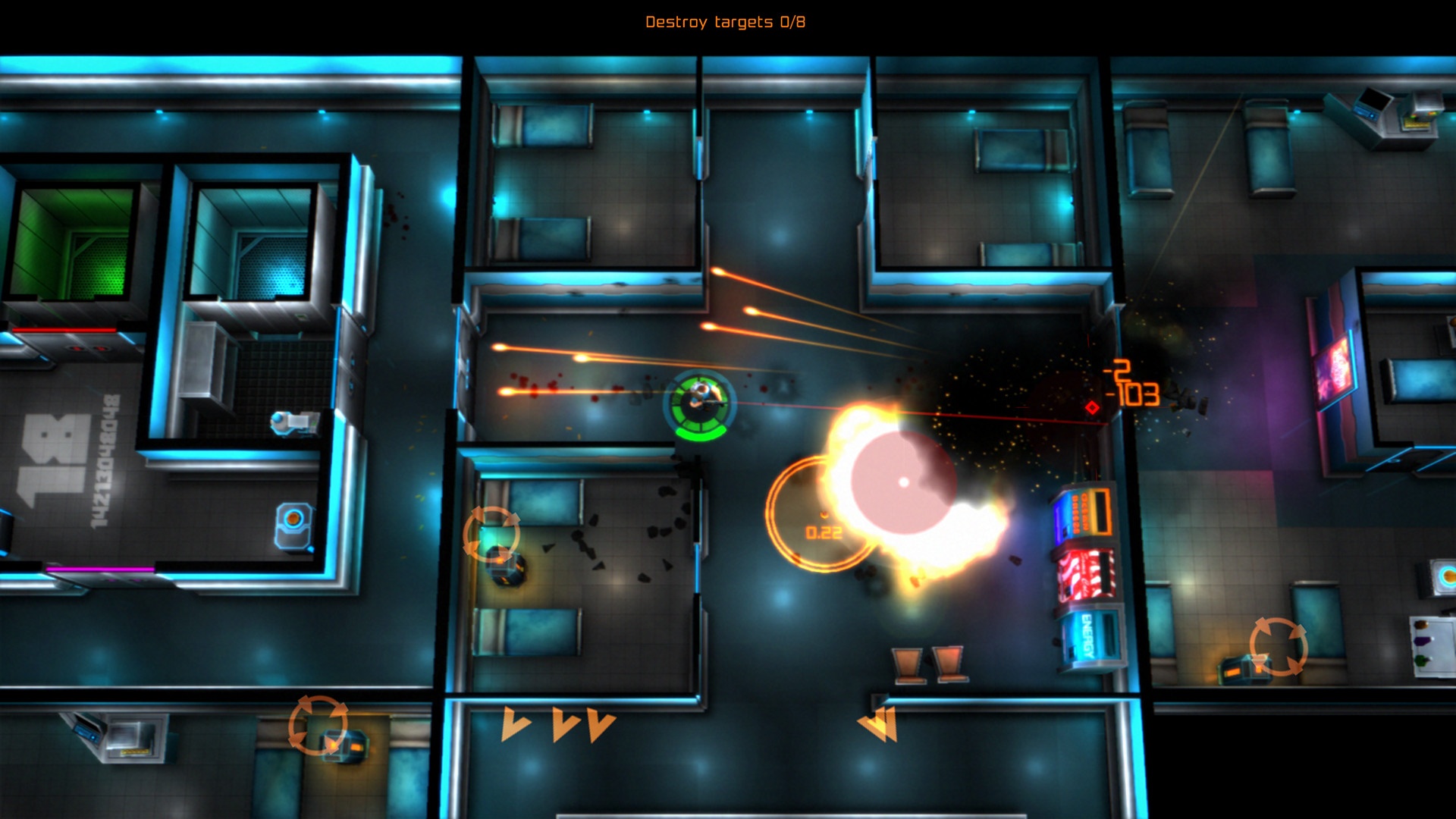 Cyberpunk dystopia. The chosen playground for many great games and stories. From classics like System Shock and Deus Ex to the modern Shadowrun interpretations, developers love to envision a future where computers and corporations hate us and control everything. I guess there’s almost something romantic about it. But, in any case, the setting really allows for some great scenarios and interpretations to unfold, and RPGs, visual novels and adventure games have all taken their licks. The twinstick roguelike isn’t native to this pathline, either, and it’s that road we tread to take us to Neon Chrome.

Neon Chrome takes a lot of nods from existing cyberpunk dystopian tropes, with one of the biggest ones being the Judge Dredd mega cities. Neon Chrome is the titular “arcology” where millions live, in a completely enclosed world, and there are rumors of dark and corrupt powers ruling, leading to some deaths and coverups. The Overseers, a combination of humanity and software, decide what’s best for the people in the arcologies, and you are none too happy with their recent “be evil” initiative. So you take it upon yourself, using some pretty crazy technology, to step into the mind of one of several soldiers who you can control, remotely, to fight your way to the top of Neon Chrome and overthrow the Overseers. The way is anything but easy, as Overseer lives up to it’s name. There are soldiers for hire, robotic sentries, traps, explosions, and bosses of various sizes to keep you from reaching your goal. 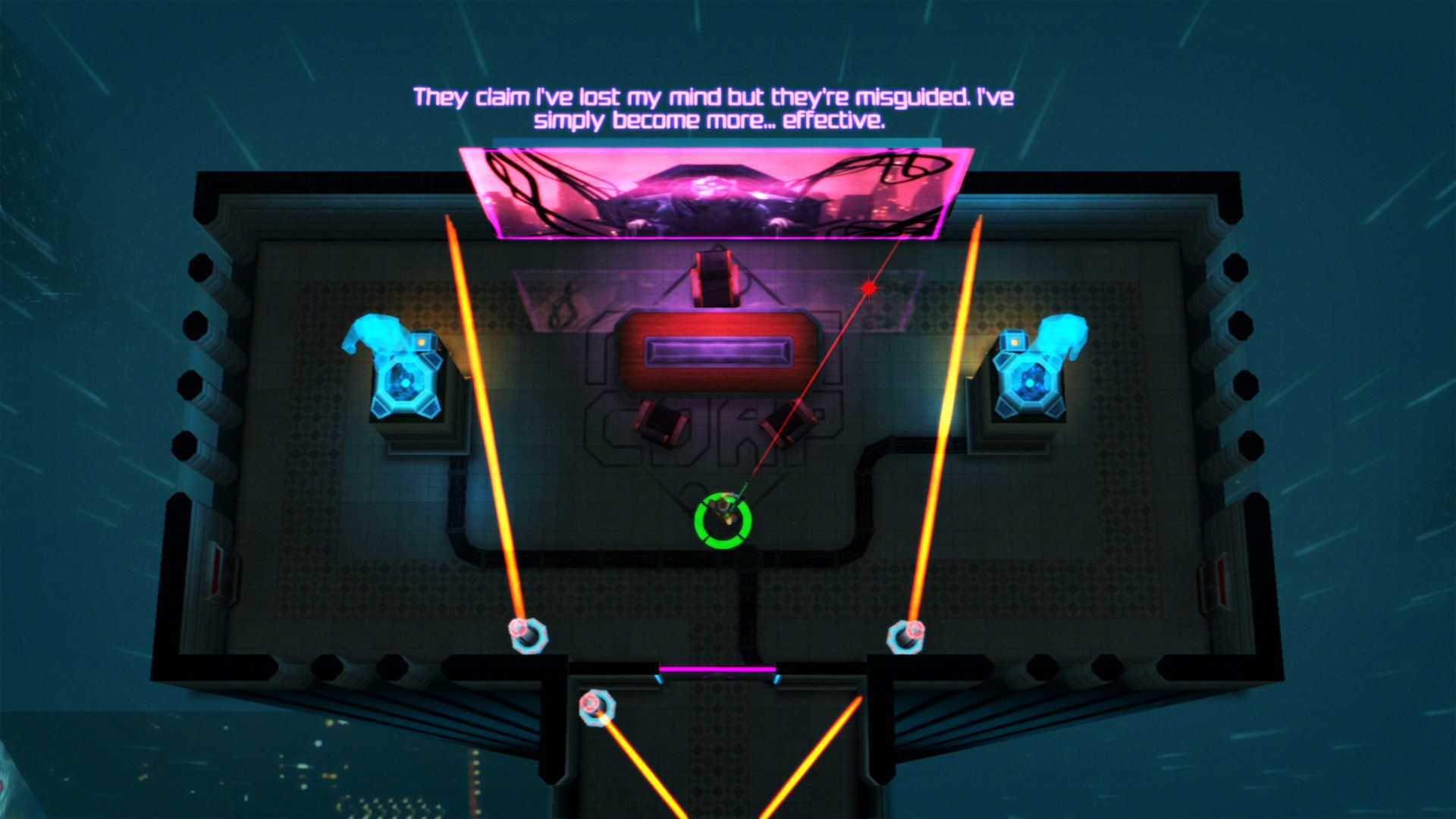 There’s a lot, and I mean a LOT, that I like about Neon Chrome. As a twinstick roguelike, the levels are all procedurally generated, with a fair amount of loot and beasts in the way. You have a ranged attack and a melee attack to begin with, with the ranged attack always being some sort of gun. You don’t run out of ammo, per say, but there is a cooldown period to reload, which can come at the worst time. Thankfully, your meatbag enemies also have to reload, and that’s a fantastic time to shoot them. The guns range from semi-automatic to shotguns and sniper rifles, with a good amount of variety in terms of DPS, accuracy and reload rates. Weapons can be found along the way, get unlocked by hunting and discovering crates, and, on occasion, are dropped by enemies. Of course, you may find you don’t even need guns after a while.

Neon Chrome keeps the cyberpunk Johnny Mnemonic edge by allowing for upgrades on the fly that you find in various upgrade pods. At first, you can only get three upgrades, but, through enough success, you can invest the cash you get off of dead bodies to go all the way up to ten upgrade slots. Some are passive, like more health, speed or even larger weapons clips. Some are active attacks, like a personal taser, and some are one-time deals, like “deactivate all robots on this floor.” Since you use up a slot, you really have to choose wisely in the beginning. I also don’t recommend investing all your cash into upgrade slots right away: the cash should definitely go into pimping your character out in the traditional ways first (increased health, higher energy, and higher damage should take priority).

Each of the different classes you can choose from upon respawn are randomized, but fall into traditional slots. There’s your soldier with a riot shield (lower frontal damage), the psycho who gets an additional slot for upgrades, the hacker with a personal drone and the ability to hack things, and this really cool assassin who didn’t blend in as well as I thought they would. Protip: “won’t get recognized” doesn’t apply when you walk directly in front of them. The hacker has the most potential each run, as they can hack open secrets (usually bonuses) and, if done correctly, the drone will draw most of the fire and will explode just when you don’t need it anymore. And you get a new drone at the start of the next level, so it’s all good. I recommend using the hacker to get to at least the sixth stage, where you’ll officially be on the second floor and get to start from there instead of back at the beginning every time. After that, it really becomes a crapshoot, especially with the procedural generation. 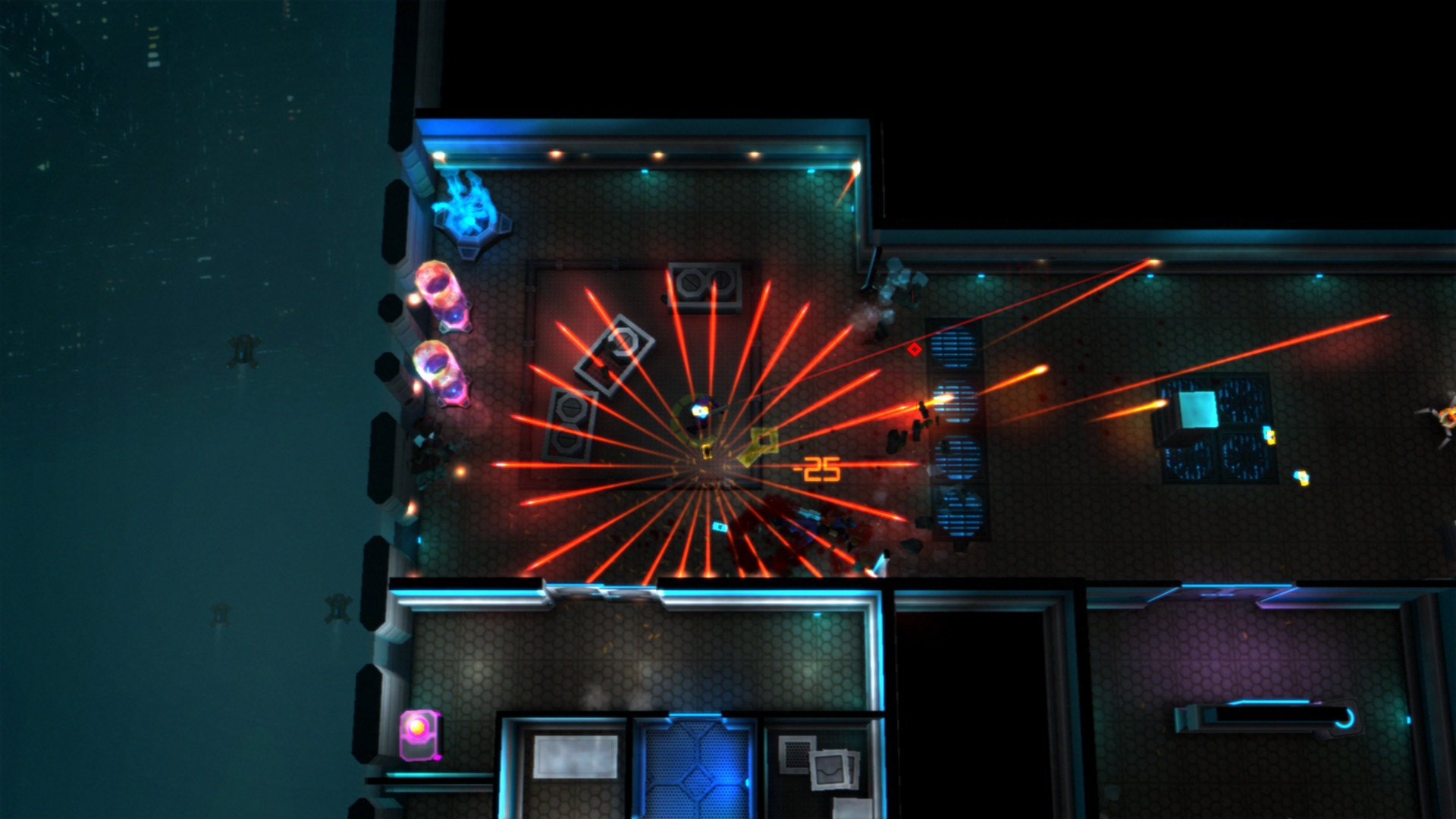 The roguelike elements of Neon Chrome are both a blessing and a curse. On the one hand, I really love getting a stage with a ton of loot boxes, more human enemies than robots and the only objective being to get to the damn elevator. Those levels are awesome. What I don’t like is when I’m tasked with blowing up five or six targets around the level, everything is a motion sensing turret bot and I forget how destructible the environment is. One of the hallmarks of Neon Chrome is a “fully destructible” world, but even that caveat has different conditions. Some walls are glass and fall immediately, which seems pretty clear cut. But others can take multiple shots and I don’t think about it until the enemy shoots through and I realize I’ve cornered myself. Then again, when you set of a massive chain reaction of explosives and suddenly the room is totally empty, that’s just a damn good feeling.

Aesthetically, I think Neon Chrome did a good job of capturing the environment the picture is painting of what it must be like inside these arcologies. It’s dark and shadowy, with the stark neon glow of boxes, lamps and angry drones lighting the way. You spend a lot of time in shadow both for safety and as a matter of happenstance, and you learn to treat everything with trepidation. The overhead view gives you glimpses into parallel rooms, which seems only fair since Overseer can see everything that you do and will, on occasion, taunt you (something I really appreciated). The enemies all look like they belong in this world, all sharp and metallic and inexplicably shiny in a land that’s clearly covered in soot and darkness.

I’m really glad that Neon Chrome came to the Nintendo Switch. Besides being a place for successful games to launch a new ship onto new shores, this is also a place for forgotten games to be reborn. Neon Chrome did alright on Steam, but I never thought it got the acclaim it deserved. But the Switch is a chance to be reborn, much like the soldiers you pull out of Cryonix in the game, and it’s an opportunity to show how far this game can go. If you’ve already exhausted yourself with NeuroVoider and want something with a different flair and feeling, Neon Chrome is the next logical step for cyberpunk enthusiasts looking to continue their twin stick high. It’ll consume your days and nights as you claw, tooth and nail, to eliminate Overseer. And if a game can take over your thought process and keep you from other games, I’d say that it’s doing it right.