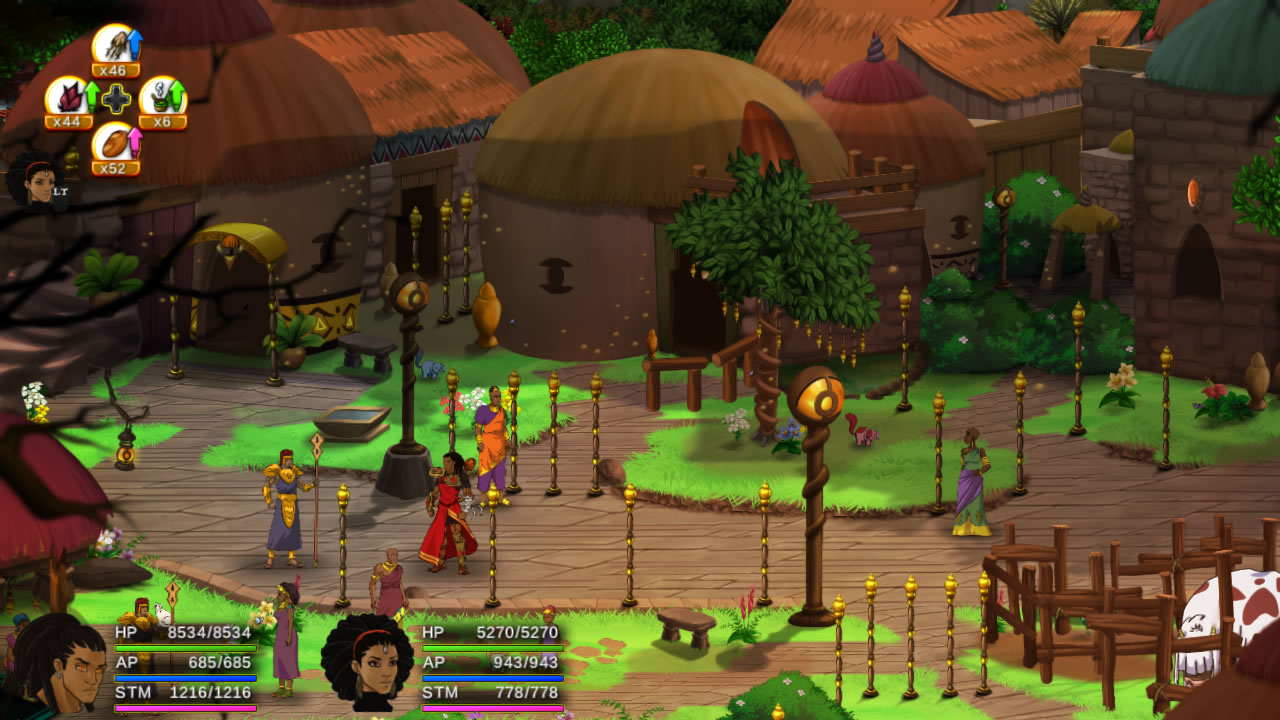 It is not often that you see an African inspired fantasy game and because of that I think that Kiro’o Games has taken on quite some risks in making this endeavour. Still, the developers were greeted with relative positive interest given their successful Kickstarter campaign. In any case, Aurion: Legacy of the Kori-Odan describes itself as a 2D action RPG, but despite the fact that the game has many RPG aspects I find that it has more similarities to a brawler or a beat’em up than to the former. Still, I guess that these similarities fall into the realm of combat because one of the strongest points of the game is certainly the story it is telling.

You play as Enzo Kori-Odan, the prince of Zama and heir to its throne. The game starts on your coronation day, which also coincides with the day of your marriage with your childhood friend Erine. What appears to be a memorable and cheerful day quickly turns into a horrible day for the people of Zama, when the city is ransacked by a group of bandits which, luckily, are no match for the new king fighting abilities. Things take a turn for the worse when Enzo’s brother-in-law, Ngarba Evou, attacks the city during the coronation ceremony in an attempt to overthrow the authority of the Kori-Odan and proclaim himself as king of Zama.

Having never played a game that sought so much inspiration from African culture I must say that, for better and for worse, I was overwhelmed by the sheer amount of detail and thought that has been put into executing a cohesive plot and game world in which everything is connected and everything is directly correlated to some other aspect. The game tells a rather interesting story about the inner self and the search for one’s true identity and the obstacles faced during such a journey. After being exiled from Zama by Erine’s brother, Enzo must now find the 4 pillars of his legacy, thus embarking on an Aurionic pilgrimage so that he is able to take back what is rightfully his. It is during this pilgrimage that you will get to witness the transformation of Enzo’s character into something very different from his initial self and how the lust for revenge can change you in some ways.

The term “Aurion” refers to this sort of energy that is channeled through the people’s ancestors, which grants their descendants unique and powerful fighting abilities. The story focuses on Enzo’s search for the pillars of his legacy, which can be described in another way as what he truly is, or in other words, a search for his purpose and meaning. This is a really interesting journey and it certainly kept me going as I played the game. Besides that, there’s plenty of lore which you can delve into, by either asking certain questions to specific characters or by interacting with people you meet across the various levels and there is also a rather extensive and well put together codex which I most certainly appreciate. 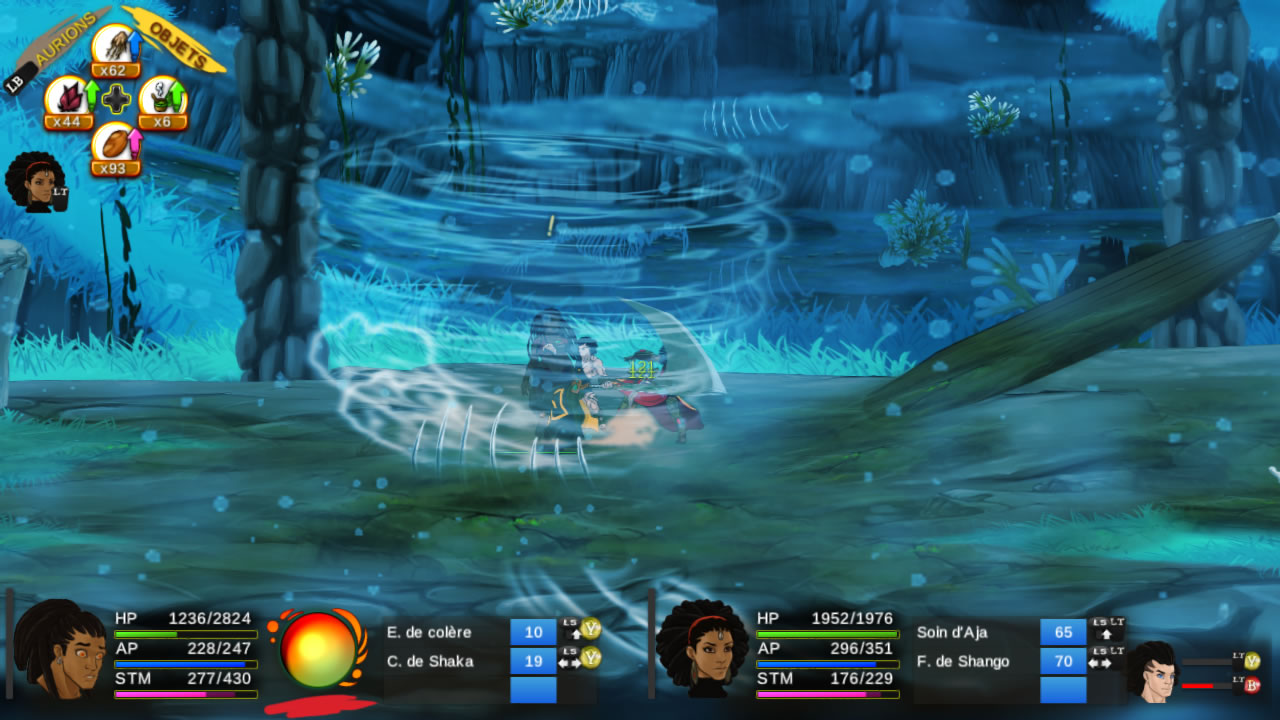 However, despite the rich world of Aurion, I must say that the many names used throughout the game are confusing and difficult to remember. This was especially bothersome during the early stages of the game when the game does not stop throwing various different concepts and terms which, ideally, you should remember but, in reality, they really slipped by and a few minutes later I wouldn’t remember what they really meant.

Most of your time will be spent in combat and, unfortunately in this case, the combat doesn’t do the game any justice. You learn how the combat works and various different techniques fairly early on the game, as the game introduces you new mechanics while putting you against tougher and tougher enemies. The wide variety of moves, abilities and possible combinations of these is really huge and it makes up for quite a complex and challenging combat system. With that in mind, I felt that the game overcomplicated itself by trying to offer a complex combat system because it failed to deliver it in an intuitive and enjoyable way.

Overall the combat feels very clunky, in the sense that you and the enemies move rather slowly and the animations don’t seem to match up with the pace of the combat. Besides that, I also experienced quite often various hiccups and framerate stuttering while in combat and I was often annoyed by the lengthy tutorial with constant mid-game interruptions. The lack of any sort of meaningful audio feedback when hitting an enemy also bothered me, even though you can clearly see when your attacks hit an enemy, it just doesn’t feel satisfying. One of the huge problems I have with the combat scenes is that while you’re fighting the characters will have conversations and since there is no voice acting it is really hard to fight the enemies and read the dialogue at the same time, so you’re bound to miss one of the two and personally I find this to be poorly executed. That said, some fights can be avoided if you do not need to eliminate that specific enemy by just walking past him, since fights are triggered upon touching an enemy.

The game also has some focus on exploration, which works pretty much like any metroidvania out there. While exploring you will acquire loot which you can use in order to regain some of your hunger, stamina, action points, sell to a merchant or even treasures or better gear. Navigating the levels can be somewhat tricky when it involves platforming sections, in which the game switches from a normal movement mode to what it calls “platform mode”, allowing you to jump to platforms above or below you, as well as climb up walls. In any case, the game does hold your hand quite a lot in the beginning of the game, by making sure you always have plenty of supplies and by restricting you inside certain areas until you perform a certain task. 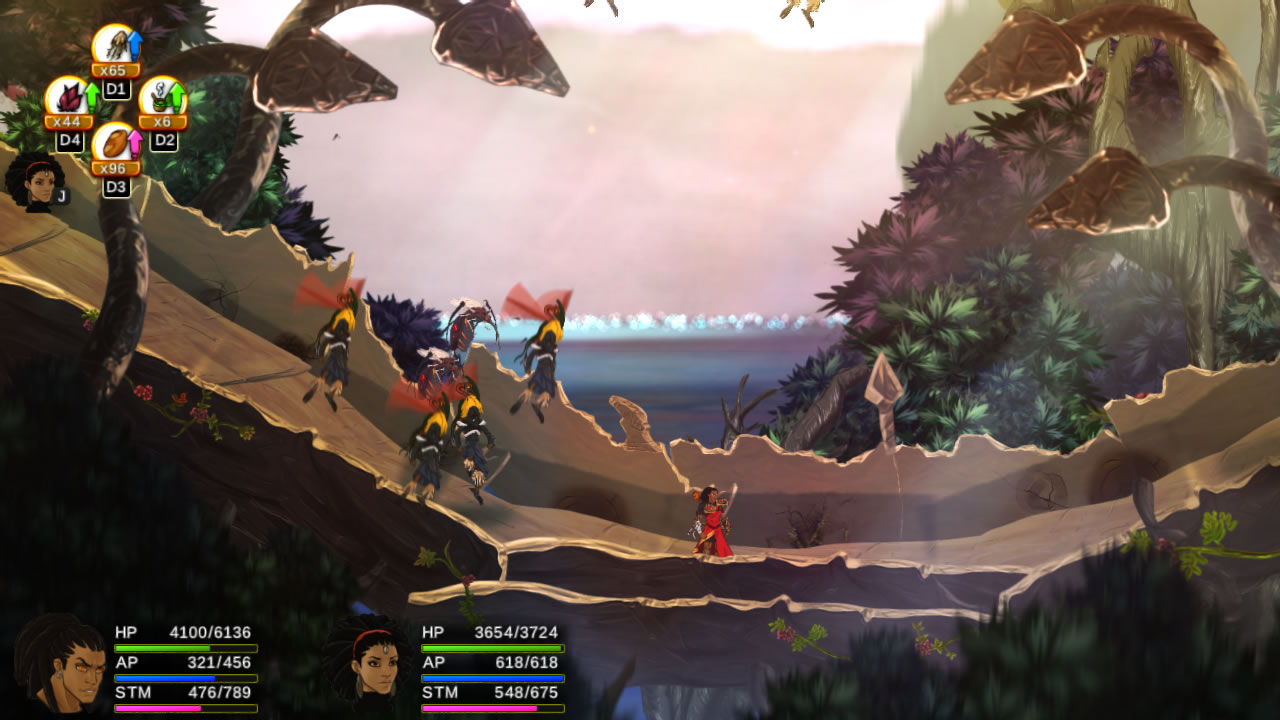 As mentioned before, the game has no voice acting, which is a shame, but it does support English and French dialogue. That said, having played the english version of the game, I must say that there are some slight errors in the translation, but they aren’t that big of an issue and the reader should easily understand the idea that the game is trying to transmit. In any case, the game also has this really characteristic music to it which felt very cheerful during the first few hours but it started becoming very repetitive shortly after and it quickly lost its charm. Given that this is a very simplistic 2D game the graphics options are pretty limited but that also made me wonder why I kept getting frame drops during fights and why the Steam overlay sometimes wouldn’t simply work. That isn’t to say that the game looks bad, quite on the contrary, I very much like the stylized 2D visuals but it’s a shame the animations are lacking and can’t quite live up to it.

Along with the combat, which takes up a lot of game time, the controls and the game as a whole feel very unresponsive and rather clunky. Sometimes, when trying to interact with a prop or a NPC I would have to move around in order to find the correct spot so that I could interact with what I wanted. Generally speaking, the space where you can actually trigger an interaction is relatively small and I often found myself slowly moving the analog stick very carefully in order to not miss these spots, which I found to be rather infuriating. More annoying than that was the AI, as I watched enemies just sitting back while their friends got slaughtered, only attacking you after you first hit them.

In the end, I can see how Aurion might appeal to some people. Personally I found the story to be interesting and it kept me going for a while but the more I played the more I felt like everything else about the game either falls short of accompanying the plot or just wasn’t enjoyable. The game does appear to offer quite lengthy considering its price, with the average completion time ranging from 20 to 25 hours. In any case, if you’re looking for a new setting like this unique African Fantasy style that you can see in Aurion, you might enjoy it if you can endure the overcomplicated combat system and clunky controls. If not, I would give this one a pass because I do not really find anything else worthwhile in here.