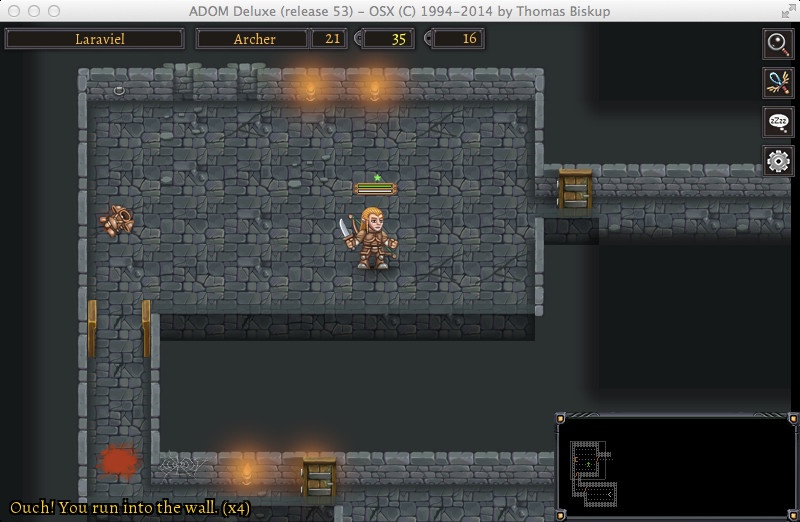 Ancient Domains of Mystery was originally released for free back in 1994 and was constantly updated throughout the years until development eventually came to a halt in 2002. Thanks to the dedication of its developers and its caring fans, further development on the game was possible after a successful crowdfunding campaign on Indiegogo in 2012 that raised over 88% of the amount being asked. That said, I’ve never played the original, my first ever experience with Ancient Domains of Mystery was with the newest Steam version. There is however a free version which is available on the game website. The Steam release adds a few extras but the core experience is still present on the free version so, if you’re on the edge about buying Ancient Domains of Mystery or not, you should check it out (for more information on the differences between the two versions check out the official website).

Ancient Domains of Mystery is a roguelike in the original sense of the term, it features permadeath, turn-based combat, randomly generated dungeons and it also has a huge emphasis on character creation and resource management. You’ll spend most of your time exploring these randomly generated dungeons, which also happen to have random encounters with various different creatures. Like in any other roguelike, randomization is a key aspect of the game because it allows every playthrough to feel fresh and different from previous playthroughs while you get to gradually learn more about the game and get to know all the hotkeys over time. The game also offers a wide variety of different enemies, items and races, professions, skills and talents for you to choose from.

Them game can be a bit overwhelming at first but it does come with a pretty extensive and competent tutorial mode covering pretty much every mechanic, how everything works and what hotkeys you should know in order to make your way around Ancient Domains of Mystery easier. That said, I must say that I was kind of shocked when faced with the amount of different key combinations the game throws at you. Still, if you have a hard time like myself in remembering every single one of them, you can just use the mouse to right-click on a specific tile in order to bring up a menu of available options and then left click on the one you want to choose. Despite the game seeming a bit too complex for my own personal taste at the beginning, in terms of the amount of keybinds that you can use and the various different mechanics, in the end, after spending some time playing around, I found that the interface is quite easy to use once you get the hang of it. On the other hand, moving is extremely simple and very intuitive, you can either use the mouse as mentioned above, the arrow keys or the numpad arrow keys. The latter are much more functional since you can move diagonally by using the keys 7, 9, 1 and 3. 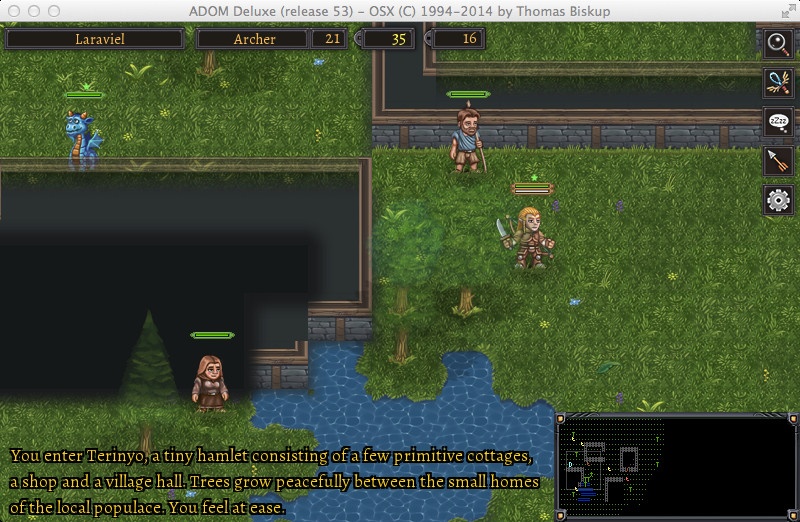 If you’re an avid reader or if you were one of those who enjoyed going through the manuals that games used to come with, then you’ll be happy to know that Ancient Domains of Mystery comes with a pretty well written manual (84 pages long!) covering the various key mechanics of the game of the game and it also has some tips on how to start playing, if you’re either new to the game or to these types of games. Besides that, the manual also has a guide on how to customize the game itself via its code, as well as the keybinds. Still, after giving it a very quick read, I figure it does require some work in the player’s part in order to do anything in this context, even the manual says so. That said, this brings up one of the biggest issues about the game, which is the lack of an options menu to change your keybinds/controls. Considering that Ancient Domains of Mystery features a wide range of key combinations and hotkeys, I can see that this might scare off some people.

One thing I must say is that, when I first got my hands on Ancient Domains of Mystery, I was rather surprised by the fact that it actually had a story. I wasn’t expecting it to have any sort of story to be honest, after all, most traditional roguelikes do not, usually they just focus on the core gameplay experience, which is fine by me but, as someone who does enjoy a good story, I do appreciate the effort and time put in order to incorporate that in a game like this. That said, the game takes place in Drakalor Chain, a region in which various forces of Chaos started pouring into the world of Ancardia via dimensional gates inside various dungeons scattered across the land. Every single one of your characters assumes the role of a hero, one who is meant to cleanse the land of all chaos by finding the source of this evil and destroy it, thus restoring peace and prosperity to Ancardia. The question is… how many heroes will it take until you finally succeed? The story itself is told through scripted quests, which you can acquire by talking with certain NPC’s in different locations, and via dialogue with said NPC’s, which is sadly not voice acted. There’s also quite a bit of background lore you can find regarding each creature if you inspect them, allowing you to get more information about said creature and even learn about potential weaknesses. Something also worth mentioning is taht, despite the random nature of the dungeons, some of them were actually meticulously hand-made in order to fit the plot nice and well.

In terms of visuals the game features a pretty well done tileset which is certainly a big plus for me, since it’s much more friendly to new players, like myself, and to people who have never played a game with ASCII visuals. Still, if you like to keep it old school or if you’re looking for nostalgia, you can still play with the original ASCII tileset. As far as audio goes, I would say that the music is very pleasant to listen to and it also manages to keep up with the pace of the game itself. That said, I do believe that the sound effects play a huge role since they perfectly convey some sort of feedback when something happens.

Now, what really matters on a roguelike is making sure that the experience is fresh every time you revisit it. That said, I’ve already mentioned that there’s tons of items, monsters, different traits and races to choose from, 6 different game modes (including the tutorial) and there’s even some other mechanics which really add even more depth to the whole experience. This would be the case of star signs for example, which depending on your character’s star sign you’ll gain certain benefits. There are also wishes, which are very rare, unless you’re playing the Exploration Mode which comes with a wand of wishing. Wishes will pretty much grant you anything you want in the game, so I’d say it’s pretty much like cheating, except in a legit way… 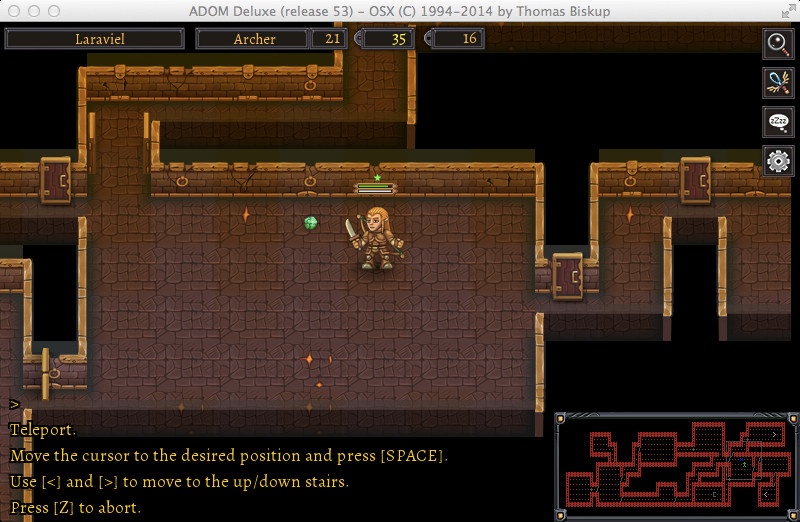 As far as combat goes, the game has a lot going for it. Besides the melee combat system, which consists pretty much in walking towards the enemy you want to attack, there’s also ranged combat with bows, wands and whatnot which add quite a lot of depth to the combat system, since it gives you the ability to taunt enemies to come at you, or kill weaker enemies from afar before a bunch of them gets near you. While this might sound rather generic you just need to keep in mind the insane amount of different equipment combinations, abilities such as spellcasting, crafting, alchemy and even praying bring into the table. One thing is certain, Ancient Domains of Mystery does not lack in content.

Even though I’ve not played this game for as long as others, I can see why people have been playing this for over a decade, it’s something made with a lot of work and effort, and it shows. Ancient Domains of Mystery is a great entry point if you’re new to roguelikes or if you just want to adventure yourself into one of the classics that gave birth to these types of games, but beware, Ancient Domains of Mystery is not for the faint of heart.

If it wasn’t for the over complicated control system which takes time to get used to and is certainly very much hardcore when compared to modern games I’d say this game would be 10/10. Still, that doesn’t mean it’s doesn’t live the test of the time. All in all, Ancient Domains of Mystery is an excellent game with plenty of content and it’s most likely that it’s going to surprise you the more you play it. It’s a brilliant mixture of RPG elements with the key features a roguelike warrants. If you’re looking for something to play for extended periods of time which runs on pretty much any computer, Ancient Domains of Mystery might just be your thing.