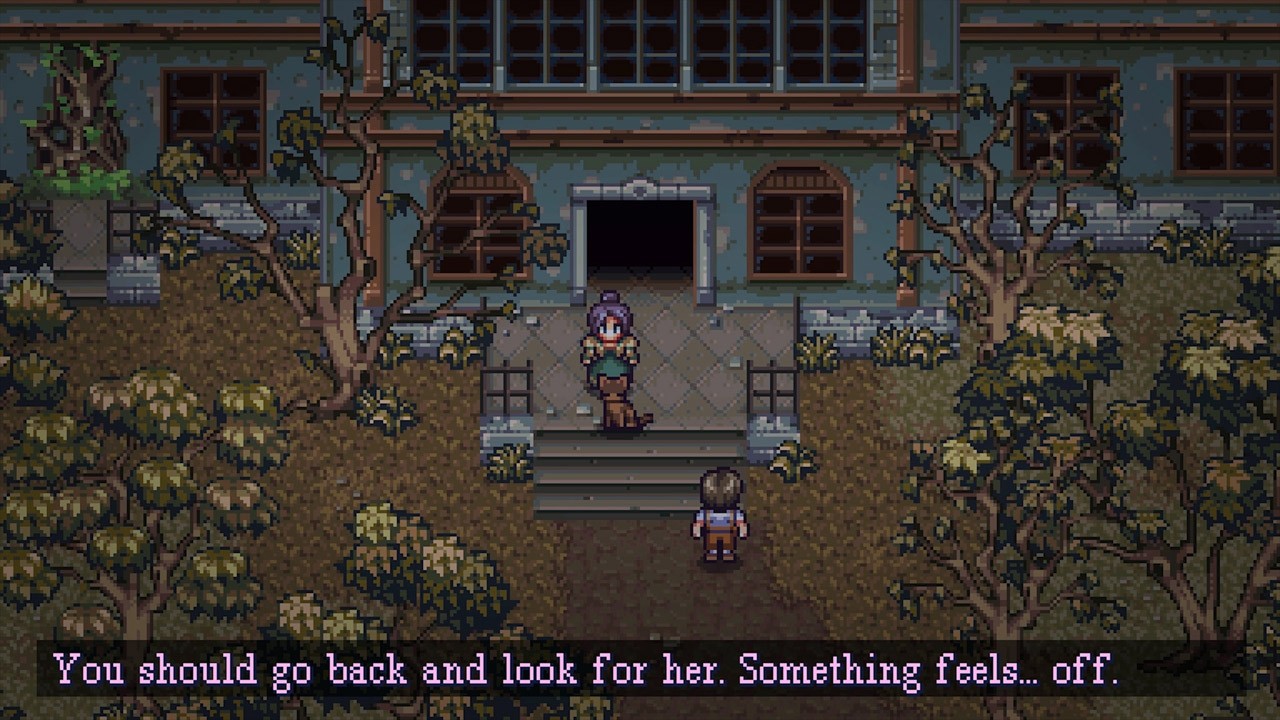 Horror games have always been a firm favourite of mine. I love unravelling well-concealed stories hidden behind traditional images of spooky buildings and gimmicky jump scares. With so many of these games built on internet folklore or the fragility of the human psyche, some of these games go even further with conventions of the genre and remind the player that things are not always as they seem. Viviette is a classic horror puzzle game, utilising it’s 16-Bit graphics and 3D sound to challenge the definition of a scary game. Do not mistake this game for a quaint To the Moon companion. Retro indie graphics do not hold this game back in the fear department.

We begin Viviette towards the end of the story. Our third-person playable character Jules Fosset wakes up in a hospital, informed that he is part of a police investigation and is asked to recount his version of events of how he, his sister and his friends were all found on Neuville’s Islet near the long-abandoned manor. The game is almost entirely isolated to this extended flashback, as you play through what Jules experienced and discovered in this terrifying place. As you guide Jules around the Neuville manor, finding clues and items to unlock doors, solve puzzles and piece together not only how the past and present are converging but the biggest mystery of all. Who is Viviette and what happened in this house? Jules’ sister is quickly taken over by some sort of strange force that pursues you endlessly. Throughout the game, there are documents to be discovered and read: diaries, letters and books. All of these documents tell a chilling story that must be read to be believed. And as you complete all of this, you are followed by this dreadful presence eager to kill you. Only running outside is a definite, temporary relief from persecution. You are not safe inside this house.

Viviette plays very much like a fetch quest and is filled with puzzles that require logic and outside of the box thinking to complete and progress. A lot of these puzzles were based on finding things in other rooms and were not very difficult. However, several of the puzzles especially early-game puzzles left me scratching my head for a while. While I am by nature an ‘interact with everything’ player, Viviette takes this to another level – rewarding curiosity and punishing an A to B approach of the puzzle genre. With multiple endings not bound by the ‘correct’ choice of branching dialogues, every move you make inside and outside of the manor matters. After playing all of the way through the game, I found myself reaching a Very Bad ending. Typically, the player understands why they have received a bad ending. Viviette’s narrative does not make this abundantly clear. A player is advised by this humble reviewer to make strategic save states when you feel like you’ve made significant progress or found a new key or item. To discover all of the endings, including the very difficult good ending, you may have to make several full playthroughs of this game. This is made less tedious by the short length and fast pace of the narrative but may not be suited to a speed-runner or someone expecting anything but a detail-orientated story. 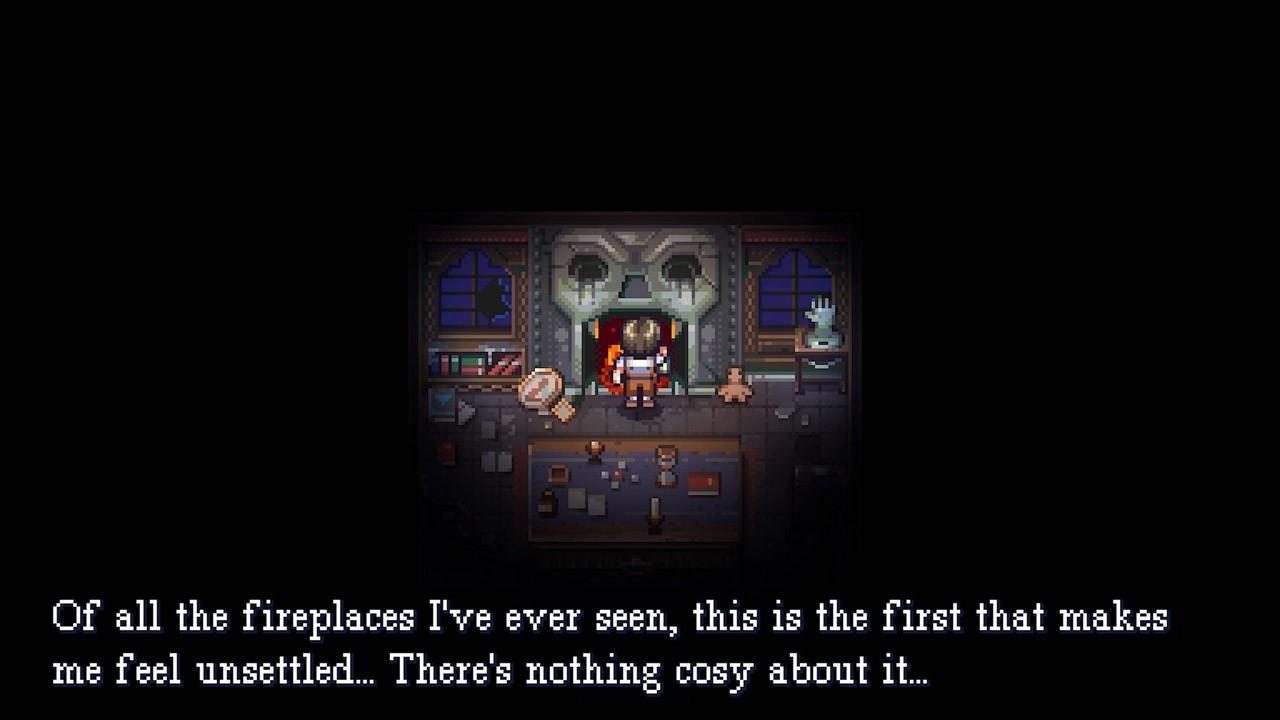 This puzzle game encourages exploration. But with the constant almost inescapable presence of the possessed Felice, who is able to follow you (and kill you!) in every room of the large building, this necessary exploration is the blatantly difficult choice. Viviette’s infrequent save points make this game significantly more difficult, leaving the player vulnerable to losing a lot of progress if they miss one. You can save infinitely at these glowing points, however, meaning you can retry certain decisions from specific save states. I found myself running out of the manor for a breather incredibly often, as this is the only way to guarantee you have lost the ‘monster’. I even quit to the menu without saving several times, literally squealing at the sudden appearance of Felice mid-puzzle. She certainly became less scary and more of a nuisance the further I progressed. Being so close to finishing a puzzle after an hour of searching for a specific use of a key only to be killed and returned to my last save state was a true low point of my experience with this game. By turning my infinite torch battery off, I was able to allude her a couple of times. But even in complete darkness, she often waited for Jules and made horrific moans in the pitch-black corridors. Sometimes this felt purely down to encountering some bad AI. On several puzzles completing jaunts through the manner, I barely encountered her. At other times I struggled to get away from her and she followed me right down to the entrance hall and I button-mashed to escape her seconds from the front door. (I did play for the most part on easy mode, feel free to mock me.)

Without spoiling the endings or the plot, I’d really recommend setting a good space of time aside for this game. The story is so much deeper than one would expect, worthy of recognition and merit. There were some moments where I felt like the story did not make sense, even after thorough searches and multiple playthroughs of the Viviette. While this was frustrating, I can understand why a lot of ambiguity was left in the narrative – even in the final moments of the story. There were also a few typos across the story in the English version of this game which is a bit of an oversight in an otherwise tightly focussed and carefully put together the plot from Dya Games. Everything felt very deliberate, with every visual and written element of the plot. My main criticism of the plot, and it is a small one, would be that the different endings have some identical dialogue. Whilst this makes sense in two of these endings where the tone and outcome are comparatively bad, I often felt uncertain of which ending I was playing when watching it. But this is a minor detail and does not have a massive impact on a casual playthrough of this game.

Music in Viviette was phenomenal in capturing tone and controlling the fear of the player. One of the only ways to predict an oncoming Felice were subtle 3D sound effects and increasing crescendos in the musical score. I played this game with earphones on my Switch and the music really helped with the immersion in this game. It really sounded like the monster possessing Felice was on my right, lurking in the shadows while I solved a puzzle on the left side of the room. The changing music helped me adapt my gameplay style and fall victim a lot less deaths across multiple playthroughs. This music combined with the lovely 16-Bit graphics really helped capture the scene and its nostalgic value for the games I played as a child. Some character movements were a bit vague, limited by the art style, as I was wondered why Jules kept flailing his arms randomly at his clearly distressed sister. But overall Viviette was beautiful in design, a calculated effort by the developers to make every detail matter. This game suited handheld play more for immersion, although some of the darker rooms in the mansion could be difficult to navigate without the use of the torch which would inevitably make you more prone to an attack. 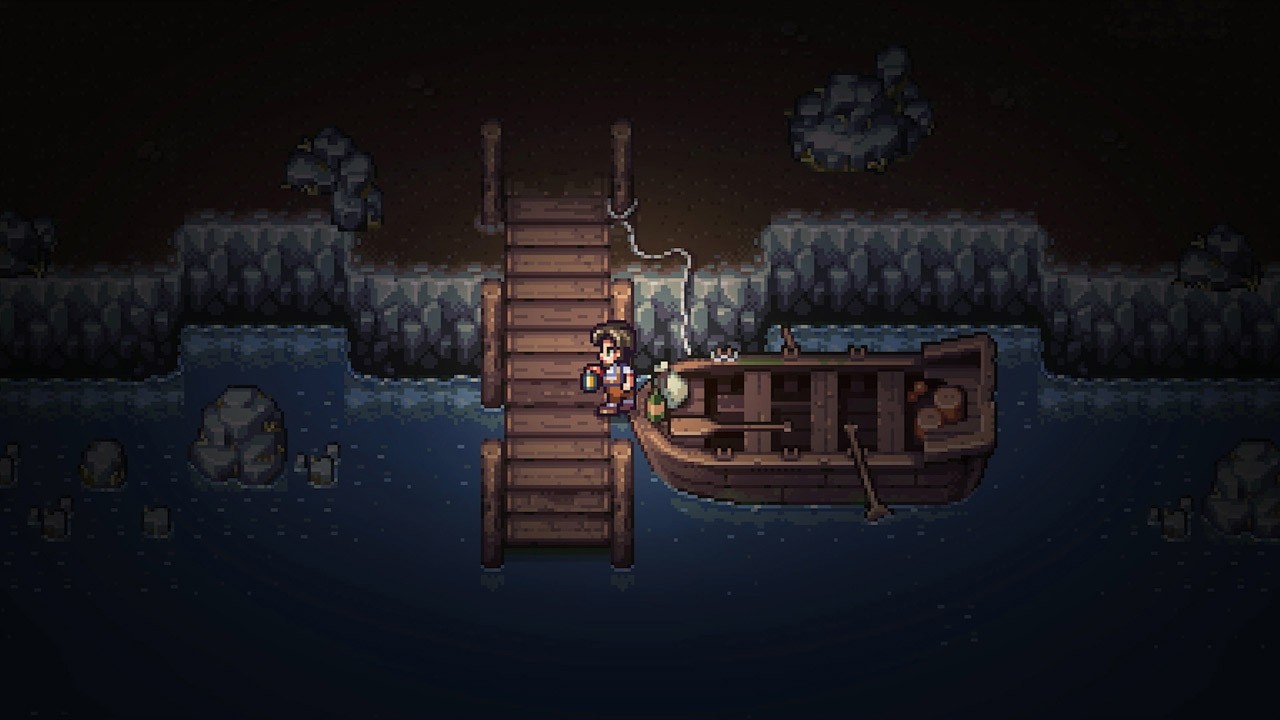 There are achievements in the main menu of the game, such as completing a playthrough in under 1 hour or achieving a playthrough with no deaths at all. These are great for players who loved this game as it adds more challenging elements to the already challenging game. Further, there are three levels of difficulty (this seemingly correlates with how often you will be under threat) and the puzzle’s exact solutions change with every playthrough. This game is very replayable and remains incomplete if you only get the bad end and consider yourself finished.

Viviette is not only reminiscent of retro games from the original usages 8-Bit and 16-Bit like some of the older Zelda and Mario games but also of the indie revivals of this graphical and gameplay style such as games like the cult favourites To the Moon and Undertale. The never-safe tone reminded me of the Slender series. For a great horror indie comparison however, I’d have to recommend this game to fans of Sen’s Mad Father and Misao. The fetch-quest puzzle style, expansive 2D maps and ‘more than meets the eye’ narrative is of similar calibre. While I feel like Mad Father’s plot and gameplay was a lot stronger, Viviette was far more frightening due to the randomised appearance of auditory and visual jumpscares. If you’re looking for something to raise your heart rate which leaves you to piece the story together, Viviette is the game for you.

Viviette left me out of breath more times than I’d care to admit as I raced around the house trying to unlock the implied secrets that would lead to the good ending. It takes the best of the horror genre and adds an infusion of charm, a detailed heart-wrenching story and hours of investigative play. With some gameplay issues like the deadly Felice being a bit too random and the AI not always responding in a way that makes sense, this game could not receive a perfect score. But this game is definitely something that I will continue to revisit, despite finishing it already multiple times. As Viviette is their first horror game, I look forward to what Dya Studios has coming next.

Viviette is a 16-Bit Horror packed with nostalgia and detail-oriented play. With puzzles spanning the entire game world and an unpredictable force stalking you at all times, it’s a indie gem you don’t want to miss.