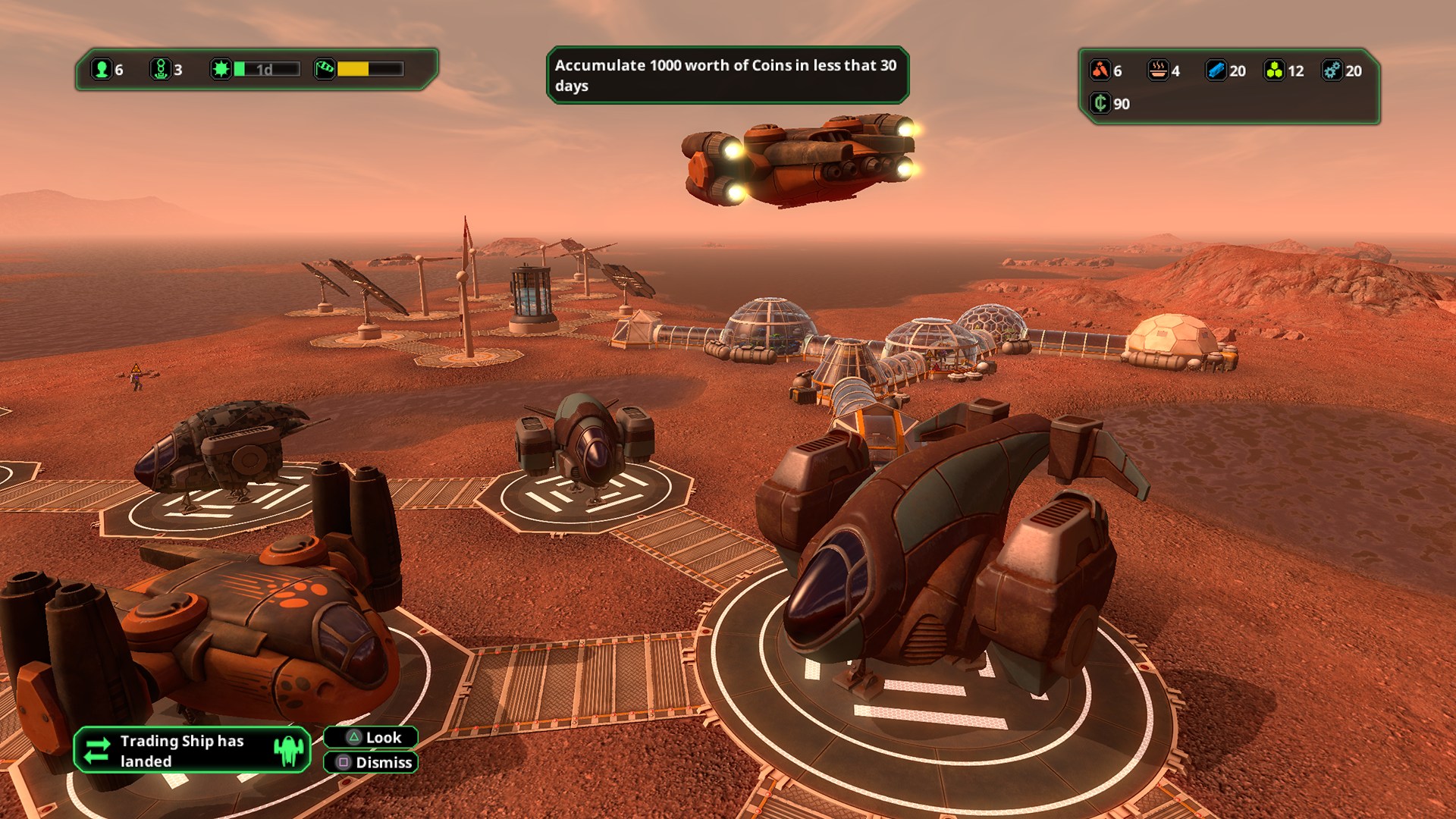 Ever since the success of games such as City Skylines and Aven Colony,  there has been a noticeable upsurge in city building offerings on consoles.  Once considered the preserve of PC gamers, it seems as though console gamers have finally thrown aside their rocket launchers,  football boots and driving goggles in favour of a balance sheet,   architects drawings and workmen’s safety helmets.  And, eager to fan the flames of this city building resurgence, Madruga Works have finally unveiled their much talked about Planetbase city building sim in space.

The premise of Planetbase is, as you’d expect, deceptively simple;  You are tasked with settling colonies on four different worlds.  And to do this you have to construct buildings,  establish oxygen, water and food production facilities, mine resources and trade with merchants.  Sounds familiar? Anyone who has spent any time on Tropico or City Skylines will be instantly familiar with the tasks at hand.  Basing the game on an alien world, however, presents its own set of unique challenges.  Not least of which is making sure your colonists can breath as well as produce power,  food and construction materials.  In order to familiarise you with the games mechanics,  you have the option to play through a half hour training level.  Here you’ll be instructed on how to meet the basic needs of a new colony.  If we had to call it,  Planetbase would be something of a hybrid between City Skylines and the Sims.  Again, we have to draw the parallel with the mighty Tropico.  Rather than just being concerned with your settlers having enough food and water (as well as somewhere to eat and sleep),  you also have to keep an eye on their health and moral by providing them with medical facilities and entertainment.

Initially you’ll find Planetbase a challenging game to master. The half hour training level can seem a little overwhelming with all the information you have to take on board.  Instead we would have preferred Madruga Works to start the game with a series of less demanding mini-levels in which you’re required to master a certain element of the game before being allowed to progress.  As it is,  the half hour training is an absolute must if you want to stand a chance of making your way through this game. 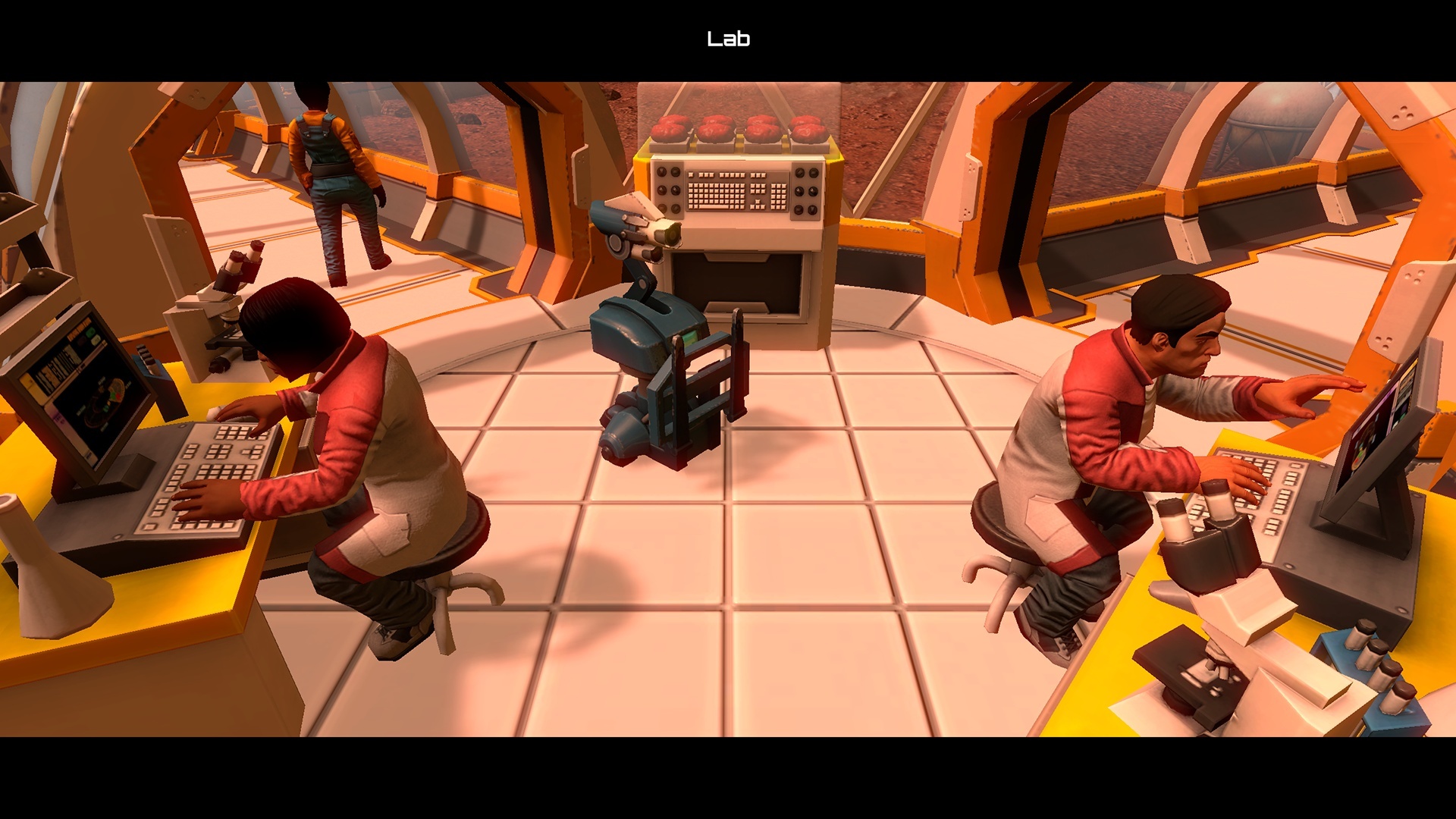 As an aside, I think we had to play the training level three times before working out how to stop our colonists dying from asphyxiation.  Duh!

Planetbase is a fairly open ended game, which allows you explore various ways of growing your colony.  There are in-game mile-stones you have to reach and once you do,  you get to unlock new ones.  You’ll also have frequent pop up screens informing you of developments in your base.  Other than that,  there is very little hand holding on offer. Like many games in this genre,  Planetbase is game of rock, paper and scissors on a grand scale.  As your colony grows, you’ll have to find the right balance between constructing buildings that are functional, ie, mine resources or generate power, with those that focus on your settlers health and well-being.  You’ll also have to survive natural disasters like meteor strikes and defend your base from intruders.

The fact that you can’t upgrade existing buildings adds an extra challenge to the proceedings.  If you want to upgrade a building, you have to demolish the present one,  reclaim its materials and start the building process from scratch.  Luckily,  Madruga Works have included the option to speed up the game (by x 4) so you won’t waste too much time twiddling your thumbs as you watch your minions carry out your instructions.  Get the balance right and you can attract more settlers.  Get it wrong,  and people start to leave or die.

As we mentioned earlier, Planetbase offers four worlds for you to colonise; a desert planet,  a frozen planet, gas giant moon and storm planet. Each has its own distinct look, opportunities and unique challenges.   Once the game establishes itself, we’re hoping that this number will be increased. 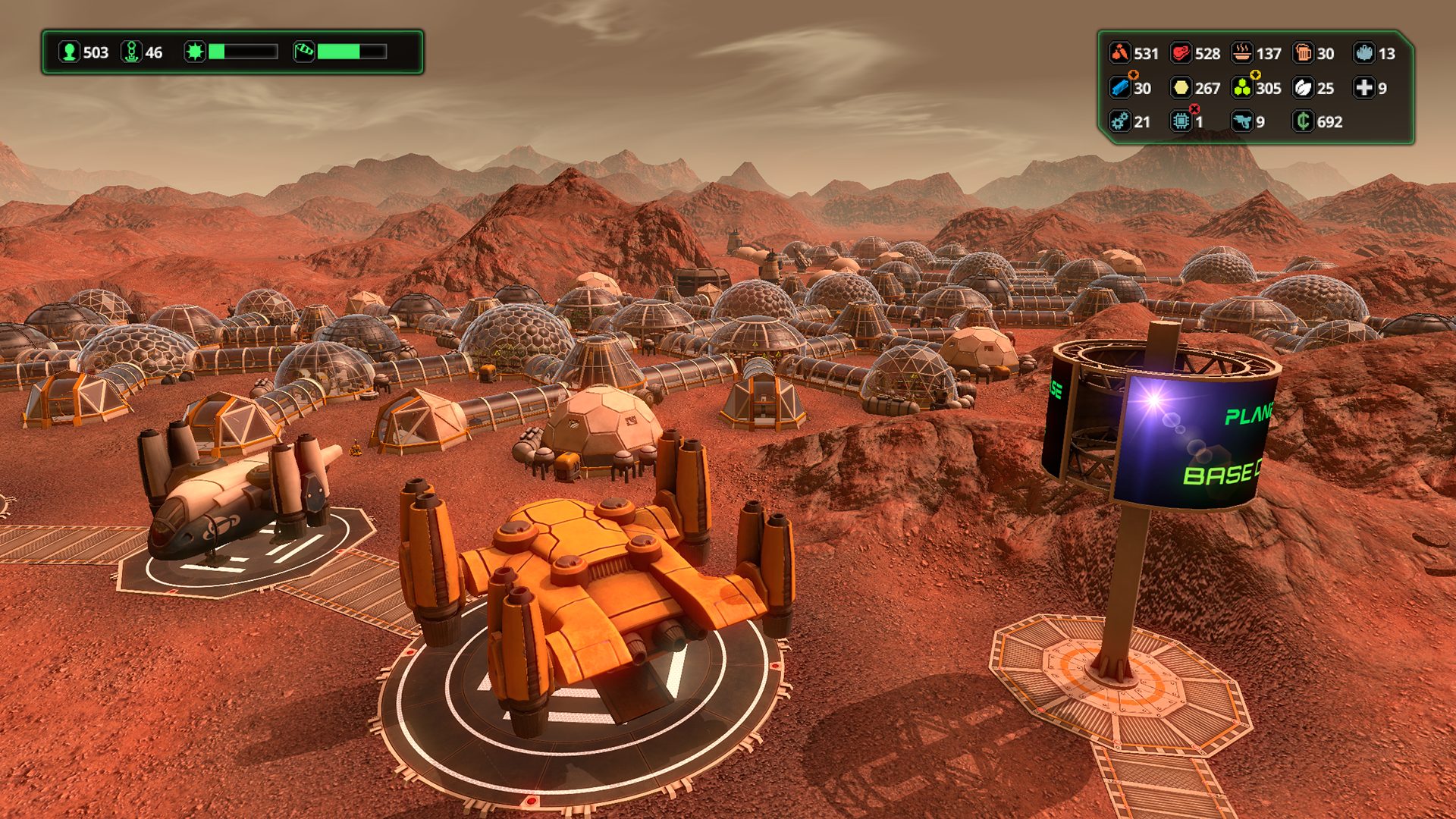 Graphically, Planetbase presents fairly detailed buildings set in otherwise barren landscapes.  You watch most of the proceedings from an elevated position,  so you’ll struggle to pick out individual details in your colonies or robots.

The in-game music is light and atmospheric, rising slightly when something of significance occurs.    All of the dialogue is text based, which, with a game of this type is as it should be.  You have time to read instructions and work out the best course of action before committing yourself.

A lot of Planetbase will be trial and error.  The learning curve can be a little steep and you will find yourself re-loading a save game so you can try something new.  The tutorial doesn’t delve into too much detail with some of the larger more complicated buildings, so, again,  you’ll have to do a bit of figuring out for yourself.  There are in total 30 achievements you can earn if you make your way through Planetbase.  Each one is rewarding in itself and encourages you to keep on playing.  We’ve spent just over a week on this game and we’re still immersed in its worlds of possibilities.  Highly recommended.