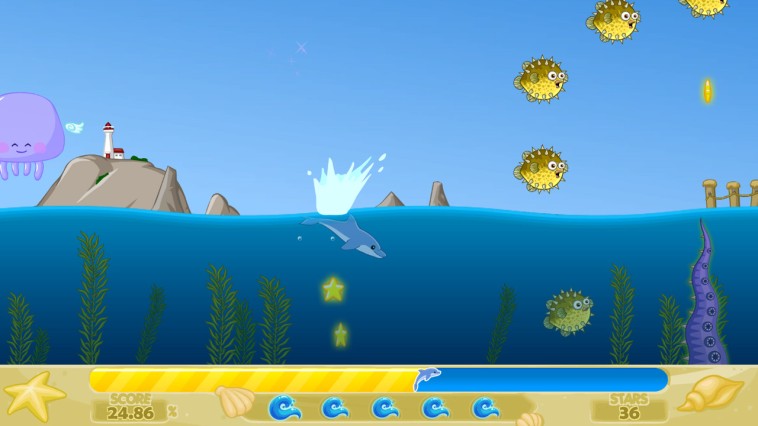 Star Splash: Shattered Star is a charming Wii U title developed by Snails Animation. At first glance, one might think this title better off as a mobile game due to its initial tap to jump gameplay style. However, this game quickly adds complex layers onto this initial layer of controls, creating a very unique and enjoyable experience with each subsequent level. Before diving (get it, because, dolphins…) into the gameplay itself, I will begin with the aesthetic aspects of the game.

As far as visuals go, this game is a joyride for the eyes. Each series of levels boasts a different background design, with every one of them having a varied, vibrant color scheme. Though the player may often be concentrated on gameplay, there is plenty to look at in the background should the player take time to enjoy it. This is coupled with pleasant enemy/assistant character designs, all of which sport a smile, making this game a great upbeat pick-me-up type of experience. Interestingly, the most basic aspect of the game design-wise is the dolphin which the character controls. Besides this, however, this game is an absolute pleasure to behold.

This game features solid music, with a wide variety of songs meant to match the themes of many of the different levels. However, the player is given the option to change the music at any time, allowing the player to customize the experience of each level to what suits them best. In my book, any auditory nuance which gives the player any bit of control is a major plus. Next up, I will cover the gameplay in Star Splash: Shattered Star. 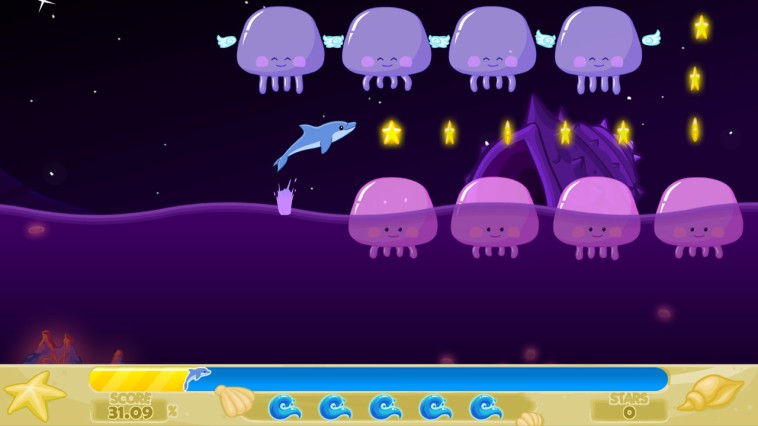 Despite it’s surprisingly simple surface, this game features a plethora of different techniques, making many of the levels surprisingly complex. The player starts each level with five energy points. These energy points can be traded for such actions as jumping (meaning the dolphin could potentially use five jumps at once), midair dashing, midair diving, and even utilizing an echolocation based move. These energy points can be replenished by landing in the water or bouncing on a jellyfish, among other things. This varied control scheme allowed the creators to create a wide variety of stage designs, adding a unique touch to each new level.

Each level has a set amount of stars that can be collected, and a lesser amount of stars required to complete the level. Because of this discrepancy between required amount and full amount of stars, the player has a little bit of leeway in regards to how they choose to complete the level. They may take on a perfectionist status and attempt to collect every single star, or take a more leisurely approach and simply shoot for the bare minimum. In this sense, the game comes with built-in easy and hard modes (although even collecting the bare minimum in each level is typically a difficult task). Each level does come with unlimited practice rounds where the player can test out their techniques before jumping into the level, but since the player has an unlimited amount of lives and does not lose anything by dying within the level, I do not really see the purpose of utilizing this practice mode. 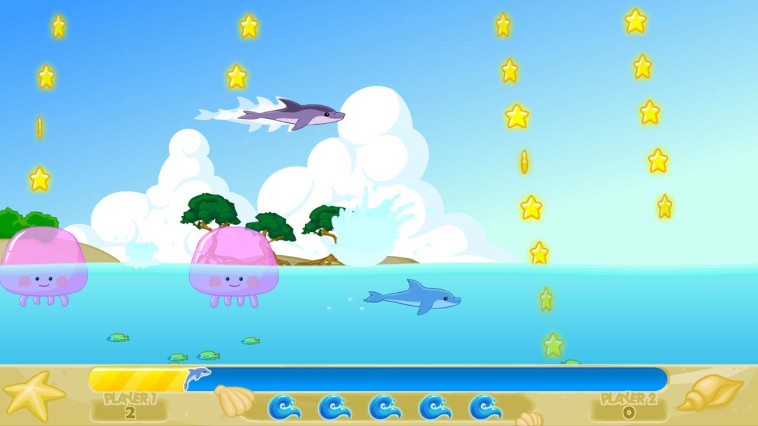 While I respect this game’s attempt at a unique control scheme, and I think its ideas are excellent in theory, the controls pose a bit of an issue in practice. For one thing, all movement is controlled using the D-Pad rather than the analog stick, which automatically makes movement more awkward and less fluid. In addition, due to the game’s relatively fast pace and the Wii U’s tight button layout, playing the game quickly become strenuous on the hands, specifically the left thumb, which will likely be in charge of controlling all movement inputs on its own. For players used to playing extremely fast paced games that require lots of tech skill, this game should pose no problem. However, for the average casual gamer, this game becomes less of a leisurely experience, and often cannot be played outside of short sessions.

Despite the discomfort that may accompany extended play sessions, Star Splash: Shattered Star is overall a solid game. The gameplay is fun, featuring both single player and co-op modes, and the designs are quite pleasant to look at. And if the player is young and not to concerned about injuring their hands, than a little bit of pain is worth the fun times this game can bring. It’s poorly executed control scheme does ultimately hurt it, but the game is still far from unplayable and a good choice for anyone looking for a chill, yet challenging game.