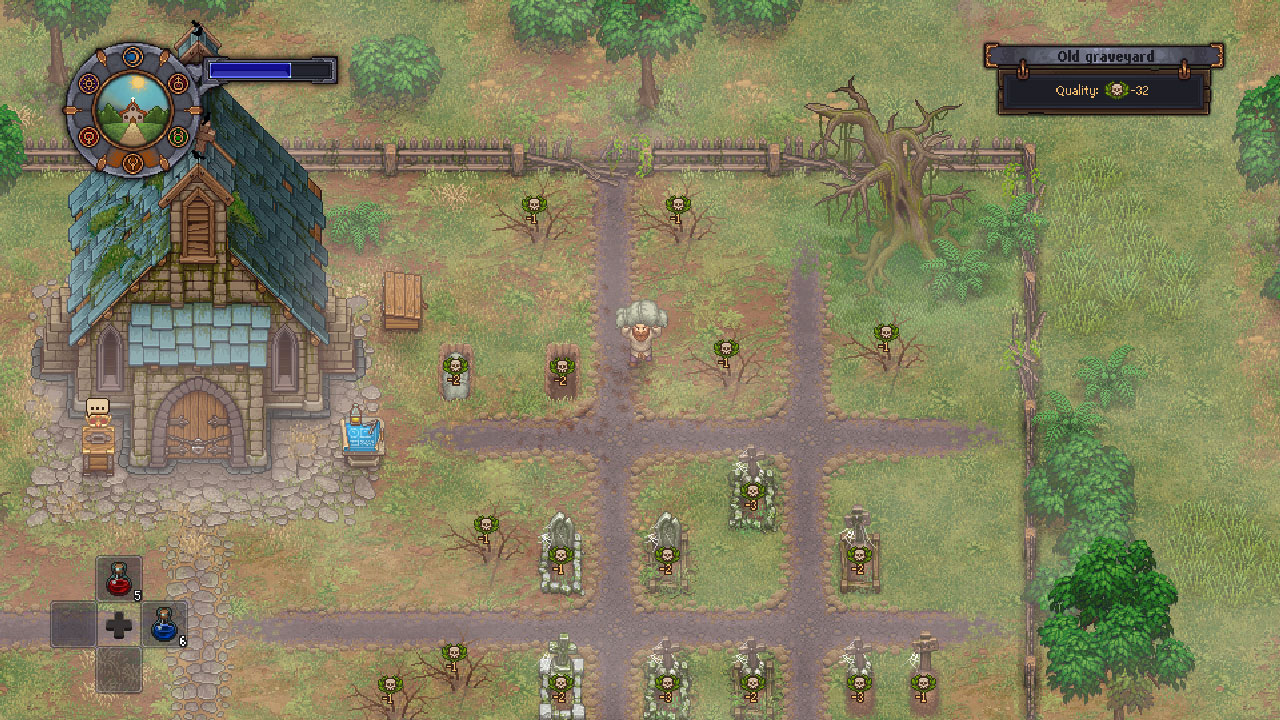 Lazy Bear Games is really starting to make themselves stand out as one of the more offbeat and innovative designers in the simulation realm. Punch Club stands out in my mind as one of those great sims that can take either minutes or hours of your time, allowing you to really follow any sort of path to the one, ultimate ending, giving you plenty of story in the meanwhile. Swag and Sorcery, though certainly a half idle clicker, really had a lot in terms of style and construct with some good, clear objectives and plenty of visually engaging concepts. I’ve been hearing a lot about Graveyard Keeper – both good and bad – and have purposely opted to avoid the other reviews that we’ve hosted on Bonus Stage. With the Nintendo Switch release finally at hand, I can take a look at the game on my own favorite platform and weigh in on the newest (and easily most macabre) sim to be unearthed on the Switch. Fast conclusion? Gorgeous, creative, but a bit of a repetitive, aimless slog.

Despite what you see in the trailers and screenshots, Graveyard Keeper is about a dude from the present day and age, who was trying to get home to his wife from his job at a convenience store when he’s struck by a truck. Our hero awakens in a far distant realm, unable to discern if he’s alive or dead, but inexplicably now designated as the Graveyard Keeper to a small, impoverished, and distinctly medieval town. His job, as far as he can tell, is to tend to the dead, keep the graveyard kept and clean, and, over time, build up the spiritual reputation of the area, hopefully getting a church built and generally making life better for all (in an inconsequential sort of way). Aided by a talking skull named Gerry, the Keeper must do what he can to improve life for all, hone his skills, and get Gerry a few good drinks: after all, it might be the secret to figuring out his way home and back to his beloved.

Graveyard Keeper, again, is a simulation game that involves a lot of running around, farming and crafting. Starting from some very basic tenants, your character soon has a hand in every pot, doing everything from picking berries and chopping down trees to harvesting meat and tossing bodies into the river. The Keeper must go around and talk to many, many people, ending up on a series of small to medium sized quests to make them happy and fetch what they need, all in the pursuit of learning new technologies, buying and selling things to maintain his own life, and, eventually, discovering how to make a portal that leads to home. Some of the information will be given up by questing for people/NPCs, while some comes from trial and error, especially finding alchemic recipes. If you enjoy crafting, this is definitely the game for you, with a ton of different items to create and separate, equally important crafting tables upon which to create. Graveyard Keeper keeps that element of survival alive as well: you need to keep an eye on your energy and health, because depletion of either leads to your death. As you probably surmised from how the game starts, death isn’t the end, but a mere inconvenience as you might lose the progress on what you were doing prior to your failing. 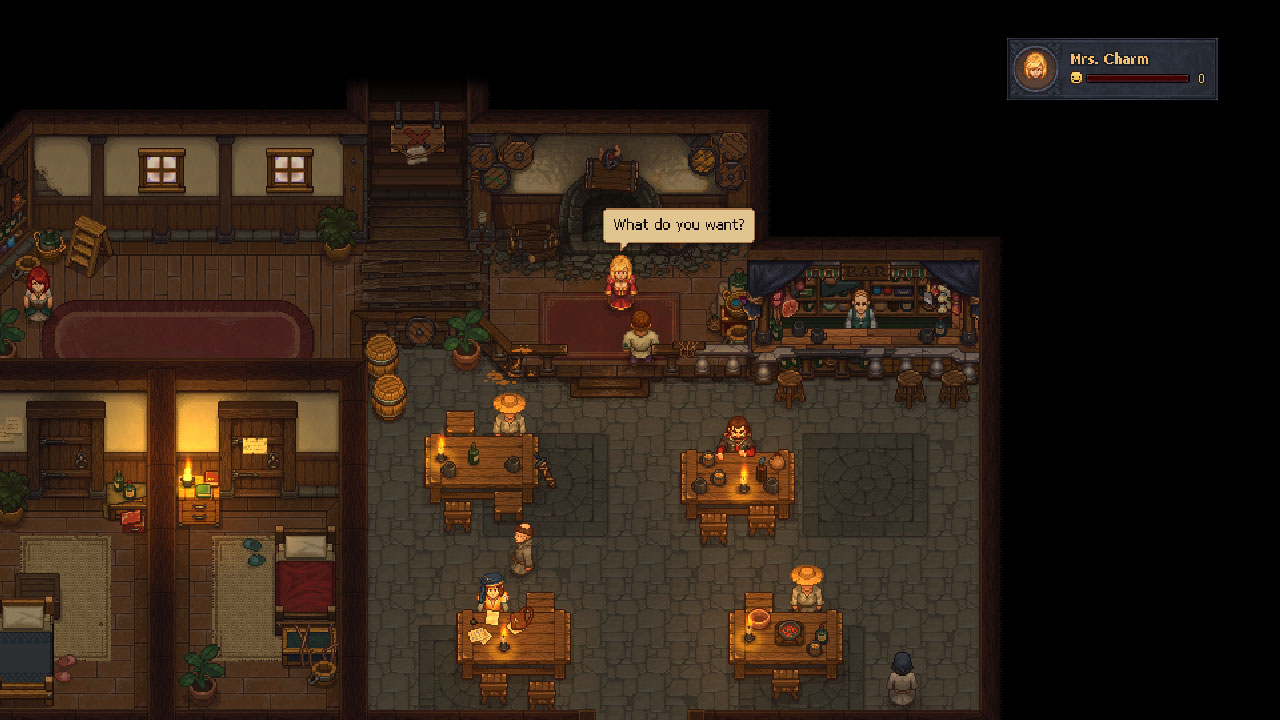 The biggest success for Graveyard Keeper is the presentation. The game is, unfailingly, stunning to look at, with fantastically drawn characters, landscapes, buildings and items strewn about the world. Watching the sun rise and fall on your hamlet and dilapidated hut looks exceptionally good, and the rotating cavalcade of weather effects adds a nice touch of atmosphere and elemental foreboding to what you’re doing. Nothing sets the mood quite like having the heavy fog sit, judging, over the battered tombstones where you’re still repairing, or on the massive routine of running six different stations at once. You’re truly in the grind from the moment you regain consciousness, but you’re never so invested that you forget how good things look, and how nice the individual sprites are upon discovering new things to create and buy. Hell, the onion rings look legit enough to make me hungry and try to find some damn onion rings, so that’s gotta say something.

The dark and frankly ghoulish sense of humor to Graveyard Keeper might throw off and potentially disgust some players, but you know what you’re getting into within seconds, if the title of the game didn’t clue you in enough. If you’re into that sort of borderline nauseating style, however, the game is a gas in terms of dialogue, item presentation and the way that tasks are accomplished. Getting so good at extracting meat from a corpse that you develop the perk of being a surgeon is both a testament to your skill and your terrible, terrible hobby. Needing to get a skull drunk in order to build up comradeship is a bizarre task at best, but at least it gave me flashbacks to Monkey Island. There’s a wink and a nod among everyone about the how and where the Keeper keeps obtaining delicious meats, but no one wants to talk about it because, frankly, it’s god awful. Yet we keep trotting along, an otherwise clean cut and simple farming simulation that’s frequently sprinkled with the fact that I need to harvest a brain immediately in order to make certain kinds of potions. It’s got the right kind of gore and blood mixed in, the kind that makes people squeamish without also instilling violence.

The drawback of Graveyard Keeper comes only if you’d been following the game for a long time, as several players had been. While the initial phase of getting your bearings can be an arduous trek back and forth between areas, getting the Teleportstone early on cuts down on at least a long, boring part of the game (with a cooldown timer to keep people from going too insane with movement and speed runs). No, the problem with Graveyard Keeper is that it quickly comes to a head in terms of what could be and then just…fizzles out. You’ll have several grand hours for your first playthrough where you are trying to figure out the right places to go, the right people to talk to, and the right recipes to concoct. Hell, I’d even highly recommend checking out the wealth of wikis and tutorial videos available to help speed things along if you aren’t that keen on a lot of “maybe this one” gameplay. Then, once you’ve got enough blueprints figured out, a couple of perks under your belt and the new church on the horizon, the game plateaus. You enter into a routine of making certain things, gathering supplies from unfettered corners, selling things, killing beasts in the dungeons and then repeating, gradually getting your stock higher and your coin purse heavier until you can purchase what comes next. The ending of the game, which can be reached after an astonishing number of hours, just sort of exists: you don’t have any grand conclusion to be reached. There are a lot of hints and spots that indicate more could be found or might be coming, but current communication suggests that resources have been redirected to the sequel to Punch Club, and, so, that’s where the dead rest. 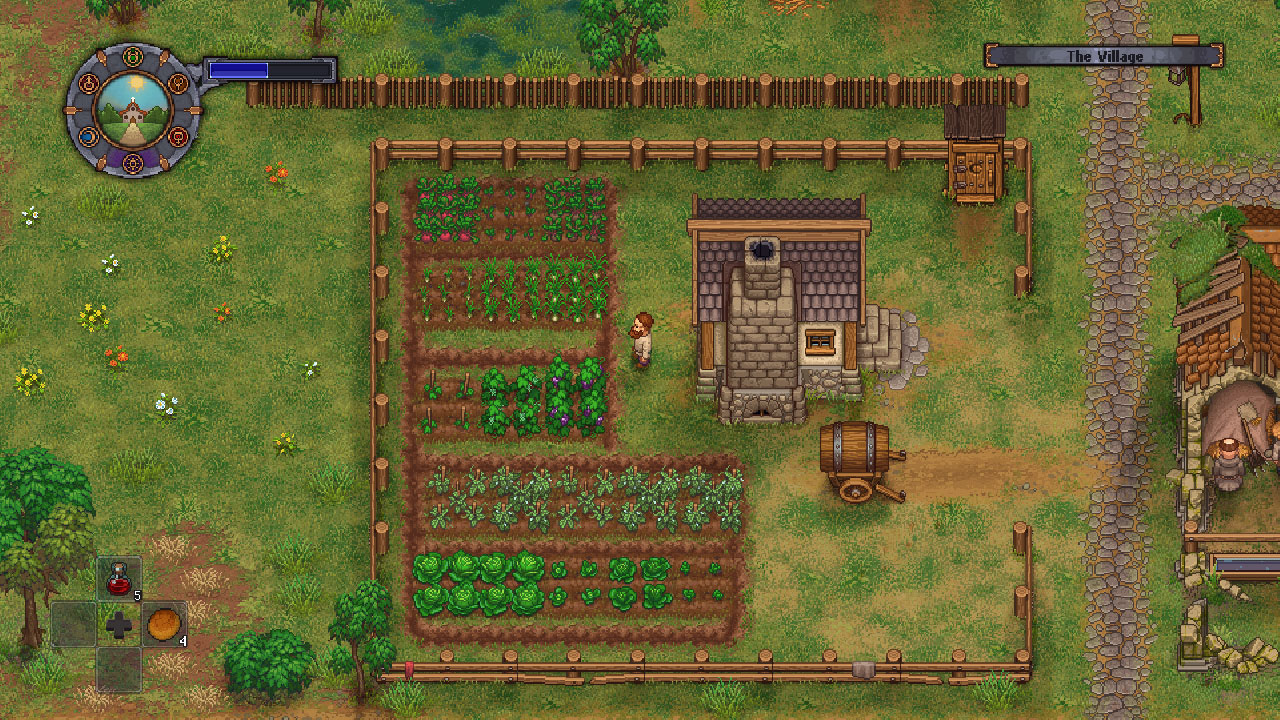 As a Switch port, Graveyard Keeper does do a lot of things right. Having this sort of game as a mobile experience with a proper screen resolution and good button support makes it more plausible and viable for long play. It’s definitely a title where you can fire off a few minutes at the grindstone or in the crypts between whatever else you’re doing, and the controls are great and tight. I do sort of wish there was some kind of touchscreen interface (at least in the menus), but it’s not a make or break on the purchase and play of the game. Additionally, because Breaking Dead does allow for a good amount of gameplay variety (zombie helpers are supposed to be very useful), I wish it had come pre-loaded with the game and then the option to turn it on or off exist. Instead, since it’s DLC, it’s not included with the initial download AND I can’t speak for how well it interfaces with the game because, well, it hasn’t gone live yet. Everything that I read about it seems polarizing, but the general consensus of “zombies are cool” seems to suggest I would have enjoyed having it on the game. I can’t even tell if the DLC will be free like the Steam users got, or if we’re gonna be paying extra for it. I’ll pretend it’ll be free so that I don’t taint this review with negative thoughts before they come to pass.

All in all, Graveyard Keeper does a good job of making a simulation that feels like Stardew Valley without the same quaint charm but a generous dose of black comedy. If you’re coming straight from Stardew, you’ll probably be mad as hell and hate it. If you’re coming from Punch Club, you’ll probably see the versatility and like it. And if you’re coming for zombies or the promise of something really cool in the future, you’ll just have to hold your breath and wait to see. In either case, it’s a good time overall, but it does have those pesky caveats.

Graveyard Keeper will have you yelling “Bring Out Your Dead!,” though whether you do it in jest or in frustration at the game’s pacing remains to be seen.