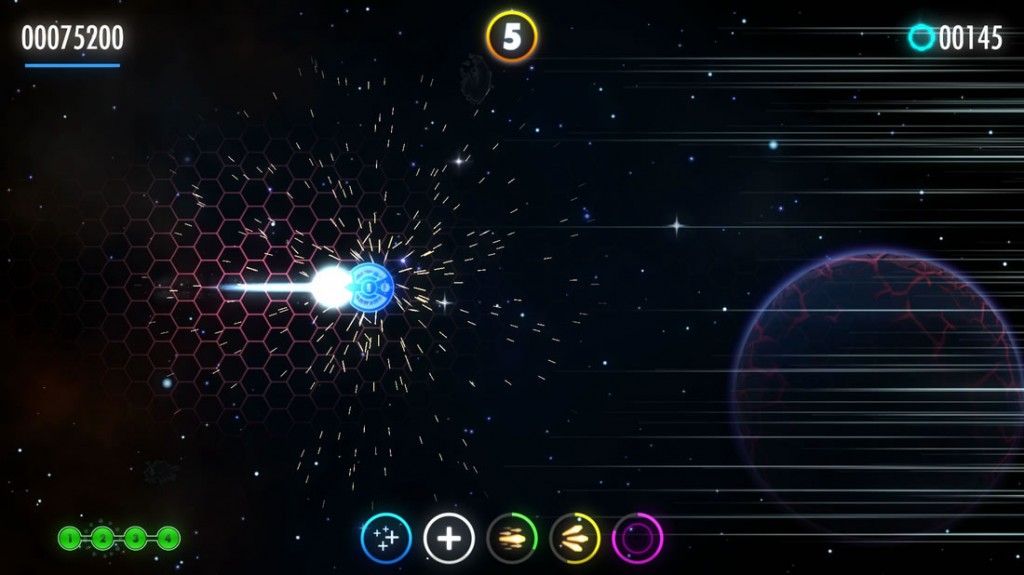 For years, fans have been asking for a game that combines the neon aesthetic and addictive score chase gameplay of Geometry Wars with the unique mechanics of the barrel-riding sections found in the Donkey Kong series and……wait, what? So nobody has ever asked for this? Ever? Really? Ok, yeah, I’ll admit, it’s not the most obvious marriage in video game history, but I tell you  what, it totally works.

Squarehead Studios’ first game might sound a tad odd on paper, but in practice, this elaborate and much more ‘shooty’ take on the Flappy Bird template proves an addictive and highly enjoyable shooter, albeit one somewhat hamstrung by its criminal lack of online leaderboards.

A horizontal scrolling shooter at heart, Star Ghost’s twist on the traditional space shooter is that flight is achieved by well-timed bursts of power that are required to keep your ship airborne. While far from a new mechanic, employing it alongside more traditional ‘schmup’ gameplay makes for a surprisingly distinctive experience, one that takes a traditional formula and makes it feel new.

While shooting is automated, basic aiming can be achieved via the left thumbstick. The range of movement is limited, but honestly, combing aiming with movement is actually trickier than one might imagine and early runs are likely to see more precise aiming abandoned in favour of basic ship control. Once you do a get a grip of things however, those subtle movements can make all the difference when it comes to keeping score multipliers running and blasting away obstacles before they have a chance of ruining your run. 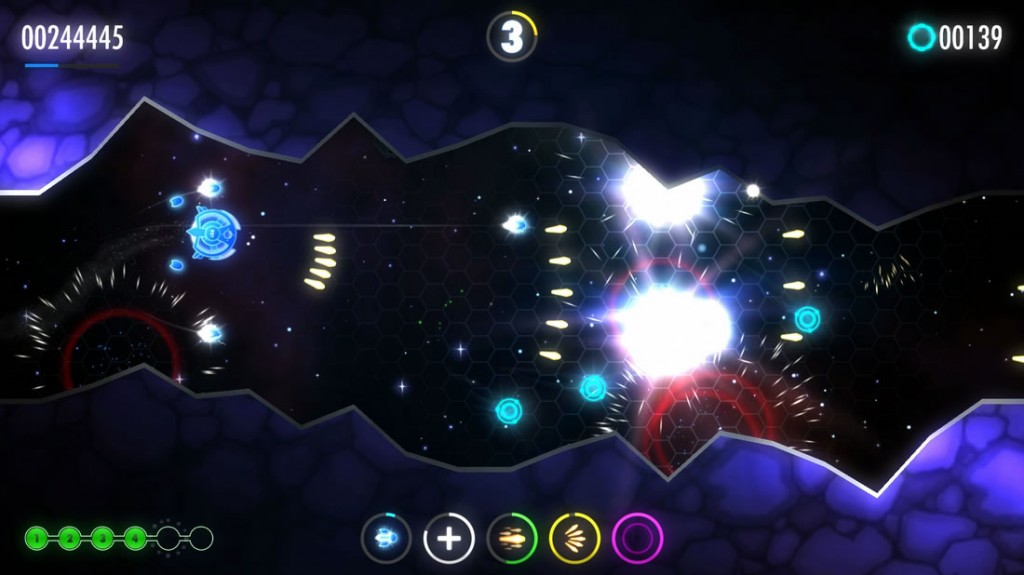 In terms of core mechanics, well, that’s about it. This is a very simplistic game at heart, but one that is imbued with a degree of longevity thanks to its carefully crafted selection of upgrades and the risk / reward element provided via your ships’ traction field. This traction field can be used at any time and will help to drag pick-ups and bonuses towards your ship. Problem is, while being used, your guns go offline meaning that you’re left exposed to enemy attacks and unable to add to your multiplier as enemy ships sail past your temporarily unarmed vessel.

Like just about everything is this game, the traction field can be upgraded to take in a wider field of items but, as you can imagine, it’s the weapon upgrades that really make all the difference. Whether it be additional missiles, a wider spread of bullets, fire rate pick-ups or stronger shields, the upgrade system has a huge effect on gameplay and is all the more important as your progress towards Star Ghost’s procedurally generated but significantly trickier latter stages. While all relatively straight forward in terms of their implementation, the brilliant thing about them is that they each have a time limit meaning that the search for pick-ups never really ends and that no single upgrade ever overstays its welcome. It’s a simple enough mechanic, but it does serve to keep you on your toes as you attempt to make the most of the latest power-up at your disposal.

Not all power ups are good for you though – alongside the friendly power-ups dropped by dispatched enemy ships are an array of viruses that, if picked up, will take out your defences and short circuit your weaponry. Again, it’s another relatively straightforward mechanic, but one that ultimately keeps you engaged throughout what is an inevitably rather repetitive experience. Of course, scrolling shooters are repetitive by design, but due to the games’ stylish but undoubtedly simplistic aesthetic, there is very little to differentiate one level from another. 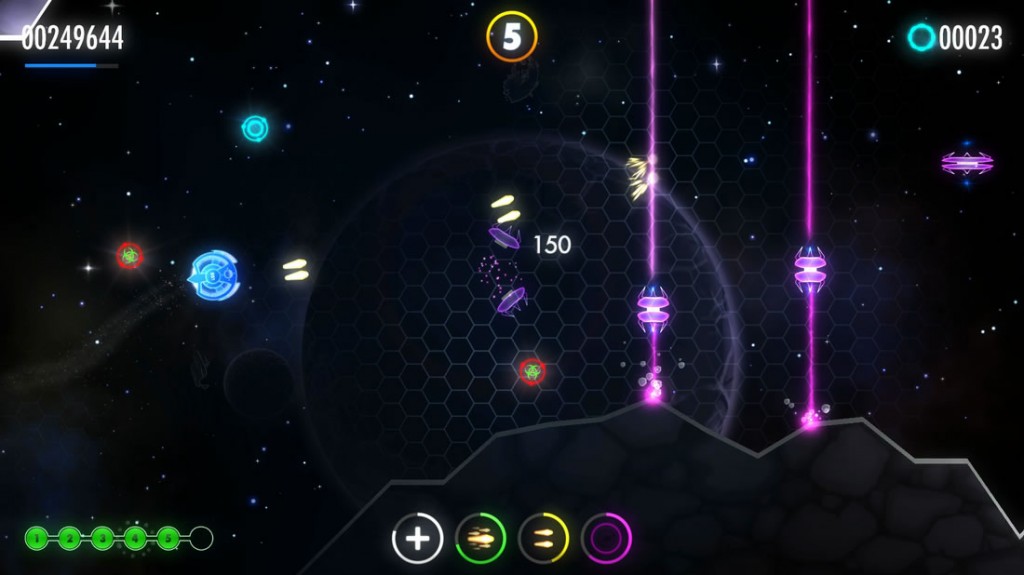 Still, while you could argue that the visual design is a little too ‘samey’, what is here is certainly easy on the eyes. Very similar to TRON and the Geometry Wars series in terms of its artistic design, this clean, futuristic look certainly suits the game and makes for a pleasant if unspectacular shooter. Luckily, while the visuals are a tad derivative, the music by famed composer, David Wise is nothing if not memorable. There aren’t a multitude of tracks, but those that are here are almost universally fantastic, thus making repeat play all the more enjoyable.

Despite a handful of issues, Star Ghost is an enjoyable and largely addictive shooter with great upgrades and a simple, but compelling score system. Sadly, while keeping combos rolling and adding to your score multiplier is always fun, the ludicrous lack of online leaderbords really does take the sheen of an otherwise solid little shooter. It’s all good having a great score system, but in this day and age, not having online leaderboards for a game of this ilk feels like a major omission.

If you can get past the lack of online competition, Squarehead Studios’ first game has a lot to offer. The clever twist on traditional horizontal shooter gameplay really does make Star Ghost stand out from the crowd, and while it’s certainly short on content, the moment to moment gameplay is consistently engaging and always enjoyable. The TRON inspired visuals are certainly pleasant, and despite it lacking artistic variety, the audio/visual design is of an undoubtedly high standard. It’s unlikely to have the same kind of impact that Geometry Wars did back on XBLA, but this stands as a welcome addition to the often overlooked Nintendo eShop library.