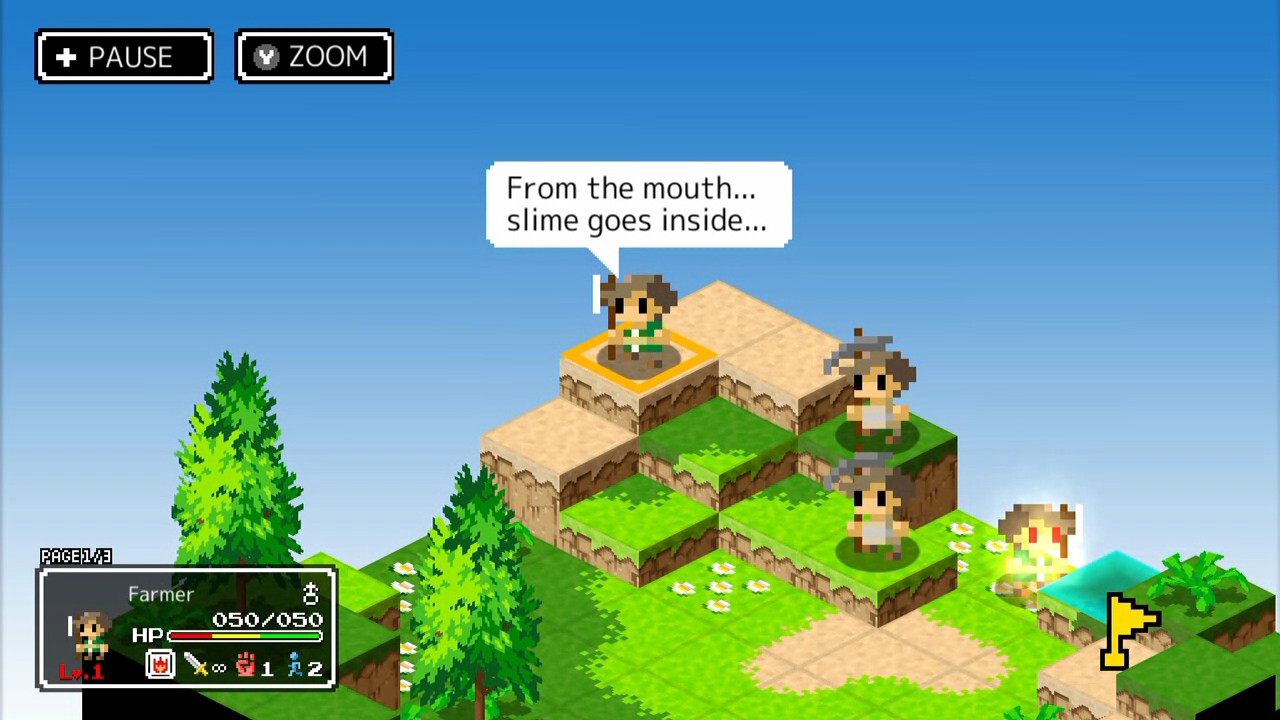 We’ve all played Japanese RPGs where the first step on our journey to herodom is to kill off some weak slimes. Well, in Ambition of the Slimes, we see the slimes fighting back. The player must lead a merry band of slimes to victory; of course, with slimes being as weak as they typically are, this is no easy task. Fortunately, Ambition of the Slimes introduces an interesting mechanic to level the playing field: slimes can take over the human enemies by jumping into their mouths, and then force them to battle each other.

Ambition of the Slimes starts off with a thorough tutorial, explaining the game’s unique mechanic: taking over enemies. This works by positioning your slime next to a chosen enemy, such as an archer or a swordsman, and then “claiming” them. At which point, the player can now take this former enemy and attack their comrades, until there are eventually only possessed enemies and your allied slimes remaining. More powerful enemies are harder to claim, which introduces a level of tactical thinking on which enemies you take over, and how you go about doing so. This mechanic really is the only thing unique about the game – the action takes place on a series of turn-based isometric battlefields, like a basic version of that seen in Final Fantasy Tactics, or even other eshop games like Mercenaries Saga 2. Aside from the claim ability, slimes have other powers depending on their type, such as the ability to slow or stop an enemy, or to speed up an ally. The other major factors are terrain (if you attack an enemy lower than you, you deal more damage, and vice versa), and character elements (the classic triangle of fire, grass and water).

There are some features that fans of grid-based tactics games will miss – most notably absent is the feature to show on the map your enemies’ combined total range, meaning that the player has to individually select each enemy in turn to work out where’s safe and where isn’t. Another lacking feature is any kind of damage predictor – we can see our character’s attack level, and the enemy’s defence level, but how this translates into actual damage dealt is a mystery until one actually presses that attack button. A final gripe is about levelling up – after each battle your slimes level up, boosting their basic stats like HP, attack and defence; unlike most tactics games, however, experience is assigned evenly across all slimes deployed, rather than more of it going to the slimes that have been active in battle. This takes away the strategy which I commonly use in Fire Emblem, of sending a particular character into battle first so that they can level up quicker than the rest of my party. 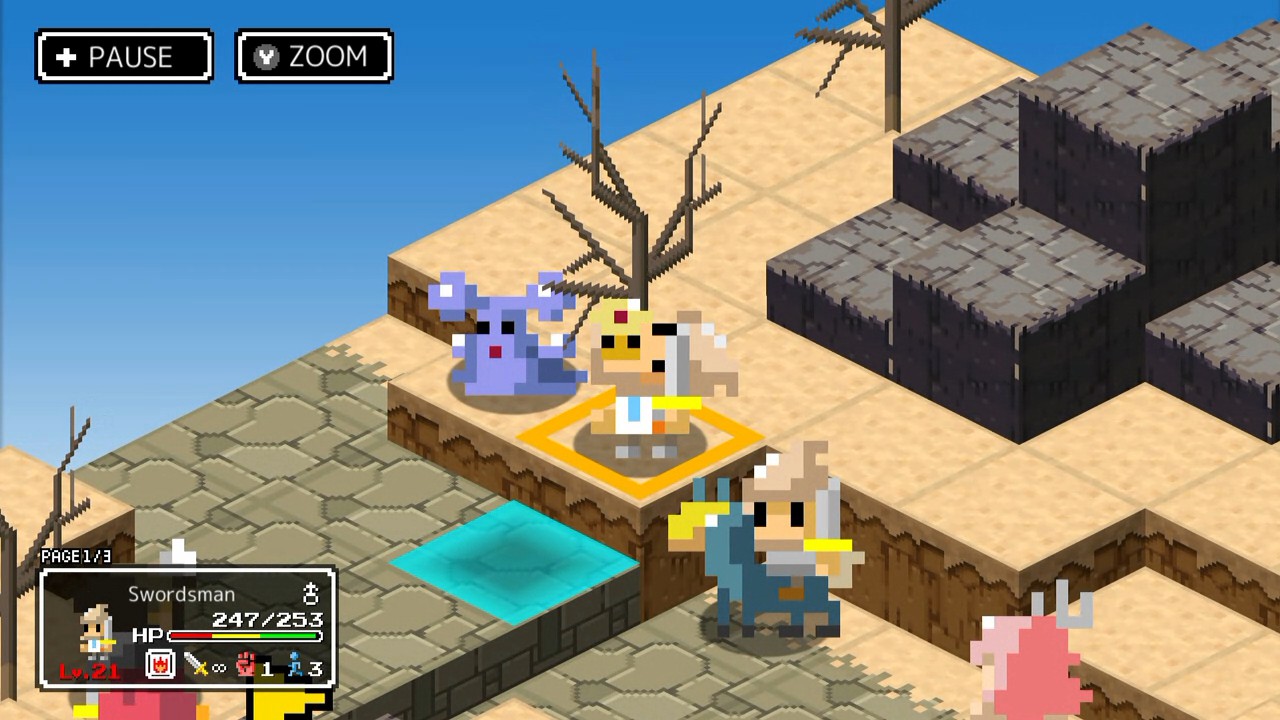 There are some fun little things though. One of these is that after each battle, a new slime will join your party – the percentage chance of it being a great slime or a crap one is given up front (say, 10% against 90%). The fun part comes from how the game tortures you: you see some slimes coming towards you, and a particularly rare one hovers in your view, just long enough for you to think, “yes, I’ve got it!”. It then swiftly moves on, leaving only the bog standard blue slime of which you already have about fifty. While this may seem quite sadistic, it demonstrates that the game is willing to have a level of cheeky fun – this is certainly not some dire “save the world using serious Japanese blokes with silly hair” game. There is also a good level of replayability for each stage – after completing a battle on either easy, normal, or hard, you unlock a series of challenge modes, which pit you against increasingly difficult enemies in the same stage.

Ambition of the Slimes was originally a mobile game, and has been released on 3DS by Circle. Readers will no doubt be pleased to hear that this release does include 3D, and it works well on the game’s isometric maps. However, something that is disappointing about this release is the dodgy translation quality. Some lines just have small typos, such as “tp” when it meant to say “to”, whereas others are garbled to the point that one has to guess at their meaning. It seems a shame that basic quality control couldn’t be completed on this game prior to it arriving on the 3DS eshop, especially considering that App Store reviews of the game indicate that such spelling errors have been spotted by reviewers for a long time.

The art style is a basic 8-bit nostalgic affair, although it is fairly cool. There are anime style sprites used when characters are actually battling one another, with there being a different one for each variation of slime (some of which are impressively disgusting) and for each variation of human character type (sorcerer, knight, thief, etc). As mentioned, the action takes place on fairly small isometric maps – these are also basic, but pleasant in their simplicity, and some of the stages with castles and such do evoke some feelings of nostalgia. The music is the similarly 8-bit inspired fare that one would expect – it is not unpleasant, but by no means memorable. 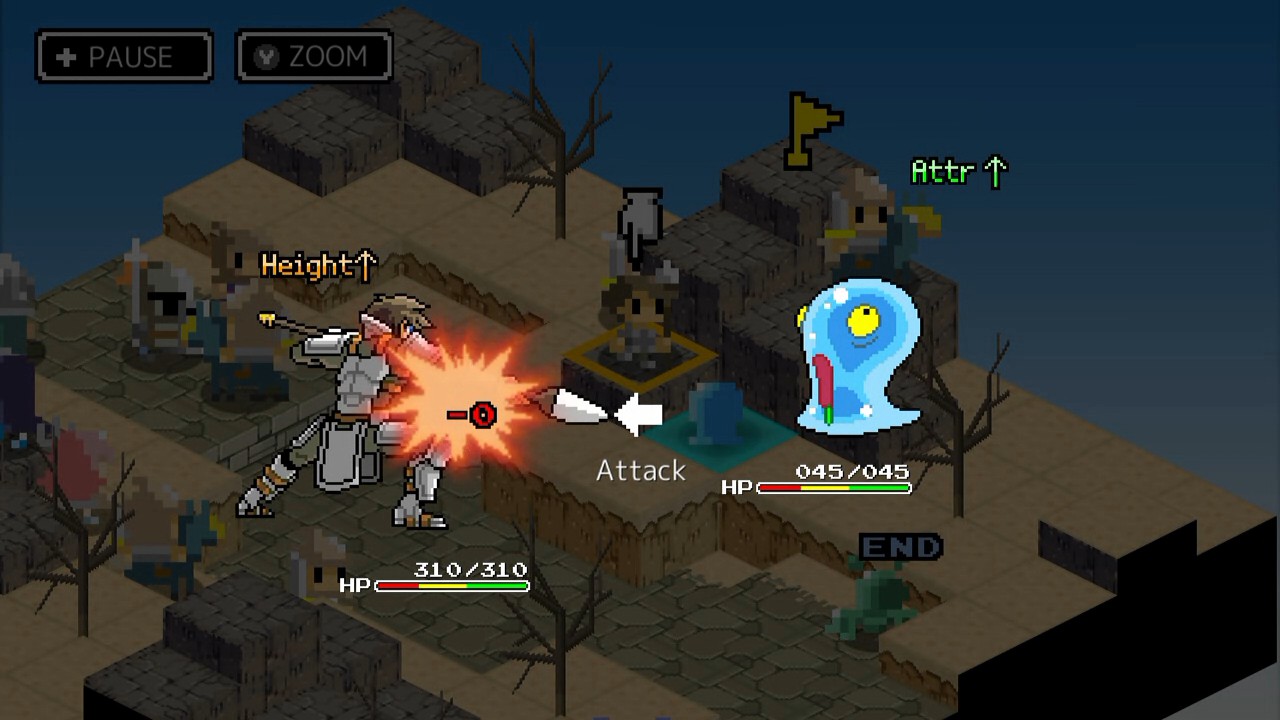 There is no real story to speak off: the player is just taking the slimes on a series of increasingly difficult missions that all take the format of “Either take over or kill all enemies to win”. There is some dialogue on each stage, although usually just a variation of, “huh, just slimes, let’s kill them” said by your human enemies in horribly unnatural English. This pre-battle dialogue is pretty much all that amounts to a story, and while its garbledness is off-putting at first, it slowly becomes quite enjoyable, and adds to the overall effect of the game being silly fun.

And while the game is silly fun, and while it does feel quite unpolished and basic at times, it does manage to provide a solid challenge. Perhaps because the stages are so small and simple, one wrong move can lead to all your slimes getting brutally exterminated in a matter of seconds, leading to a lot of restarting of stages to try out alternative strategies. This is when I had the most fun with Ambition of the Slimes – when my party of warp slimes gets wiped out, and so I change tact and restart the battle with some blue slimes to slow the enemy down, and then manage to seize a magnificent victory.

Ambition of the Slimes is a lot of fun if one has the patience to deal with its various faults, and can get into its challenging gameplay. It is far more difficult than first impressions would suggest, but rewards the player with a good level of replayability; pick it up and give it a go, and before you know it you’ll have spent several hours in a row wreaking vengeance on the nasty humans with your merry band of slimes.