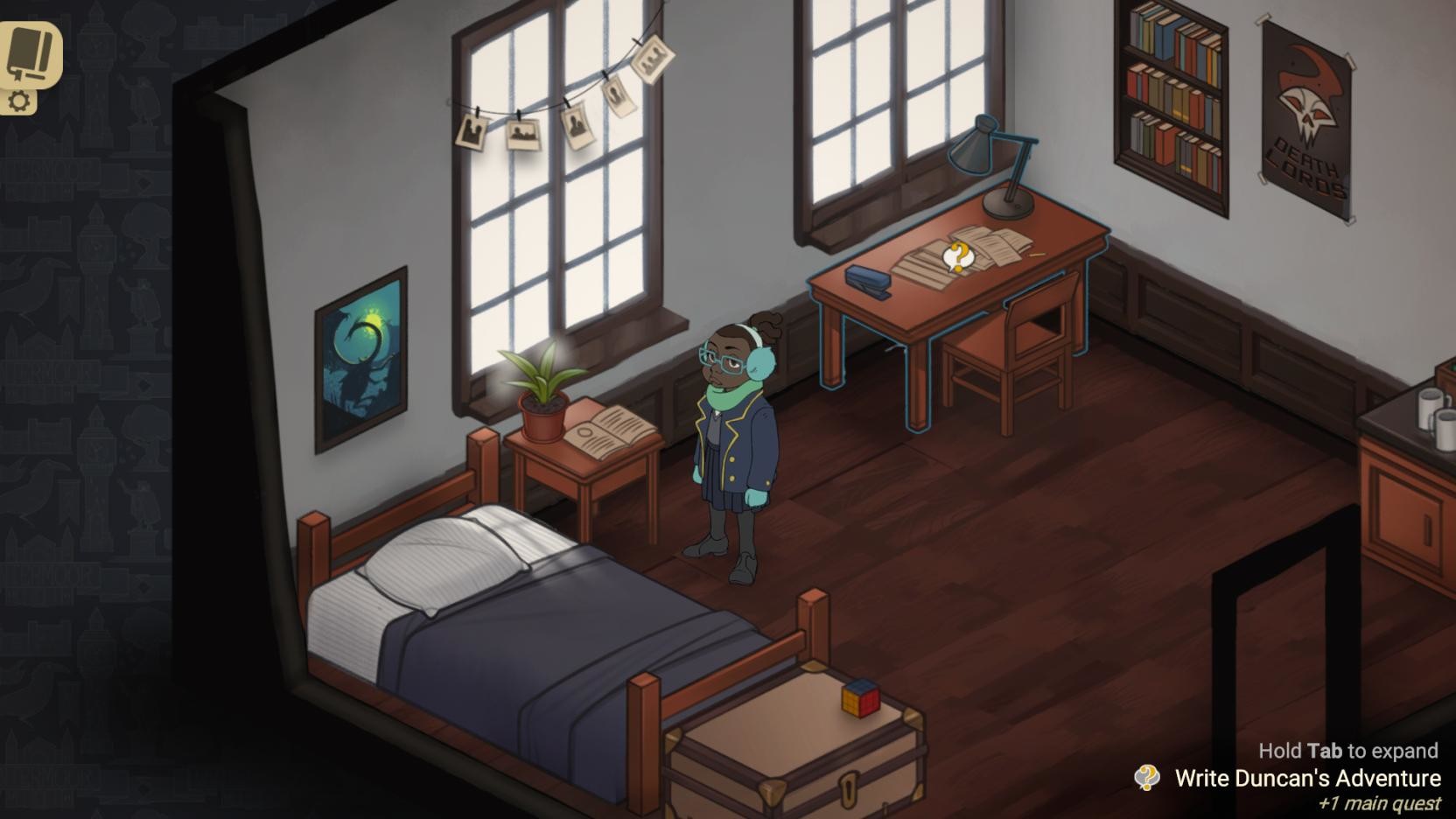 Wintermore Tactics Club by Versus Evil is a game that can’t quite decide what genre it wants to be—for better or for worse. It blends point-and-click adventure with board game-like strategy RPG and sprinkles in some minor choice-based text selections for a social-sim-lite component. The game is divided into 7 chapters, each highlighting a different extracurricular club at Wintermore Academy via a club-versus-club snowball fight tournament orchestrated by the cunning and secretive headmaster.

Wintermore Tactics Club primarily follows three friends—Alicia, Jacob, and Colin—during the exploits of their afterschool “Curses & Catacombs” clubs, a none-too-subtle doppelganger of the real world’s Dungeons & Dragons. These three must fight for their place at the school when Principal Enfield makes a sudden and startling announcement that a series of snowball fights will determine who will be the Ultimate Club while any losers will be forcefully disbanded.

The C&C battles are the most engaging part of the game and they stem from two narratives. The first being the progression of Alicia, Jacob, and Colin through their club’s roleplaying adventure campaign. The second comes from Alicia suggesting they approach each snowball fight like a C&C encounter, thus putting you back on a familiar grid-lined battlefield every time you face a new club challenger. Combat takes place on a small grid-lined field where characters navigate a range of movement and attacks to target a select number of recurring enemy types.

Perhaps on purpose, the game doesn’t give you a healer during the tactics play, which feels like an obvious miss although it might have made battles too easy. However, you can pick from an assortment of familiar classes any RPGer will know by heart: rogue, cavalier, mage, and so on. Mix and match party members and special abilities until you find the right fit for each course; this keeps the battle system from getting stales, as you can rotate through your roster and refresh your team. For the most part, the tactics RPG-portion of Wintermore Tactics Club can be vanquished in one try per level. If you happen to get stuck, three losses will give you a “No K.O.” assist option, which makes the level an auto-win.

Power-ups are a big help for strategizing across your team and can be unlocked either naturally throughout the story or through optional point-and-click sidequests. Most of the sidequest text is fluff; not particularly relevant to developing the story nor that characters any deeper. I tended to skim or skip most of the fetch quest exposition to save myself some time and sanity.

If you like the strategy-lite combat of the South Park games (The Stick of Truth and Fractured But Whole) mixed with bizzaro-world school life visual novels a la Bad Apple Wars, then this game may be for you. 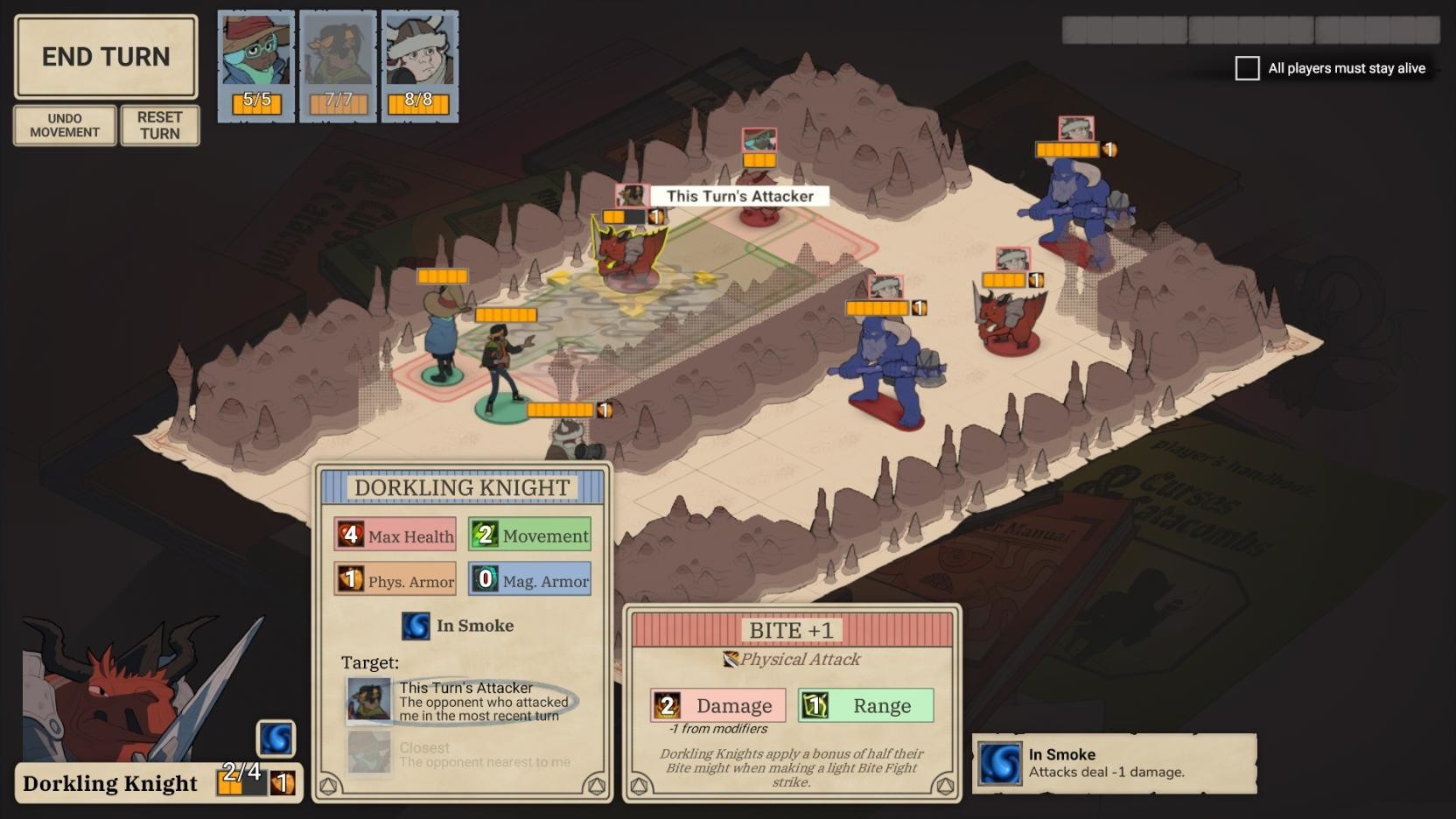 When you aren’t engaged in the tactical battle, you will spend your time exploring the map: a classroom area, a faculty office, the quad, a stadium, and the dorms. You will come to know the map well, as it doesn’t change throughout the story. Getting familiar with the setting will encourage greater engagement with the narrative, especially as the history (and present) of Wintermore Academy start to entangle with what the characters learn about their favorite game and least favorite high school principal.

As for the story itself, the stakes of Wintermore Tactics Club are painfully low at first. The first two chapters don’t dedicate much time explaining why any of these clubs are worth saving. It has a simplistic 90’s after school special “hero kids, bad adults” vibe with little substantiating the situation. As the chapters progress, you slowly (sometimes annoyingly so) come to learn that each club is a metaphor for belonging in a world where you feel like a misfit.

Be prepared for a text-heavy, character-driven narrative with spots of boardgame strategy punctuating the story. It can be repetitive at times but the climax of each chapter is worth its weight in emotional gold. Whatever character you identify with, from music enthusiast to animal lover, will compel you to press forwards and you will be rewarded with genuine, well-written declarations of friendship and belonging.

As you win snowball fights, you have the option to recruit members from the newly-disbanded clubs to join your C&C campaign and assist you in the rest of the game as allies. This keeps each chapter fresh, as you are forced to experiment continuously with new faces on the battlefield before building your ultimate team. During the recruiting process, you learn what makes each character tick: a study in human socialization or a lack thereof. What pushing people away? What draws them together? These are the questions Wintermore Tactics Club sets out to answer.

Before you recruit someone, your staunch gamekeeper (slash DM) will give the user a moment to write a story for the new addition to the team. Here, the game lets you choose from a selection of text prompts that vaguely influence how the characters interact once they land on the boardgame battlefield. You can pick enemy names, character motivations, and backstories. It doesn’t change the narrative that much but the personalization is a nice touch. 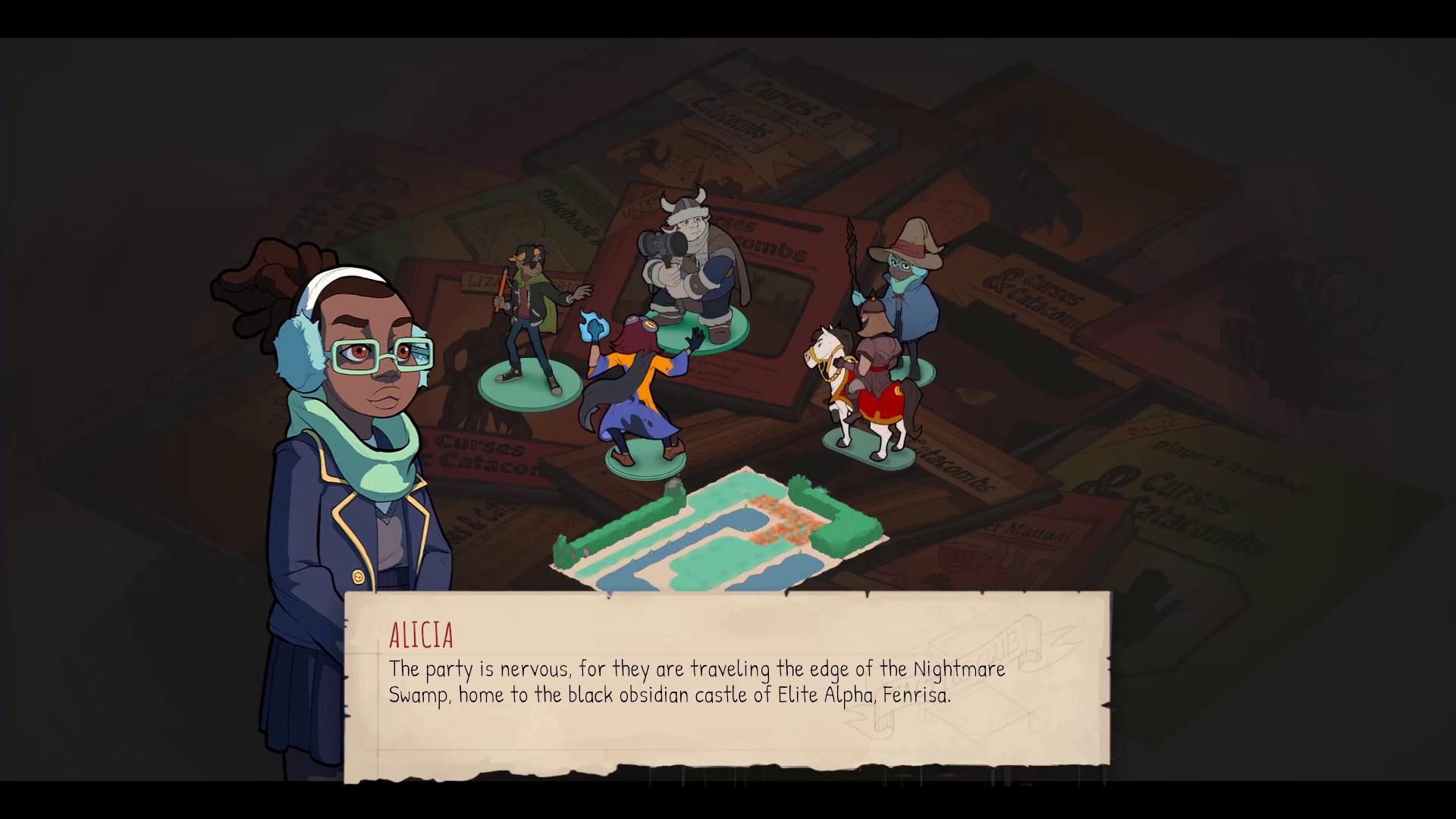 The cast of characters, including the stylish artwork, boasts an undeniable charm. Not only is each character interesting and well developed in a short amount of time, but the cast is widely diverse across race, gender, and sexuality spectrums. This bolsters the overall theme of the game of “misfits trying to belong.”

Wintermore Tactics Club makes you face the best and worst qualities of each character: Why would an icy-cold personality begrudgingly partner with others? How can a hyper-controlling personality be coerced into cooperation? And can a meek personality truly develop meaningful trust, or is it merely an act of self-preservation? Or, can a misfit pave their own way in the face of adversity without succumbing to the social system that failed them in the first place?

While the journey is enjoyable, the final chapter undoes much of what Wintermore Tactics Club worked tirelessly to build up until this point. Without giving anything away, there is a bit of a deus ex machina when it comes to revealing your final opponent, which doesn’t follow the pattern of the game nor the world building thus far. Additionally, players learn that dismantling the individual clubs in favor of unity will save the day, which adds another nail in the coffin of the already weakened stakes built into Wintermore’s primary conflict.

The final two fights are centered around gimmicks rather than a test of everything you have learned so far, which makes them somewhat of a disappointment. The first of the two also contains way too much mid-battle text and cut scenes that add little value, other than to delay the fight, which makes it frustrating if you have to repeat the stage.

Users may get tired of the monotony of the point-and-click map aspects of the game but I guarantee that the promise of the upcoming tactical roleplay will compel you onward. Simple, fun, and addictive, Versus Evil has created a perfect mini-adventure for longtime RPG fans and newbies alike. Well-built characters anchor the gameplay and round out the experience to one worthy of the modest time commitment needed to experience the full arc.

Simple, fun, and addictive, Versus Evil has created a perfect mini-adventure for longtime RPG fans and newbies alike.