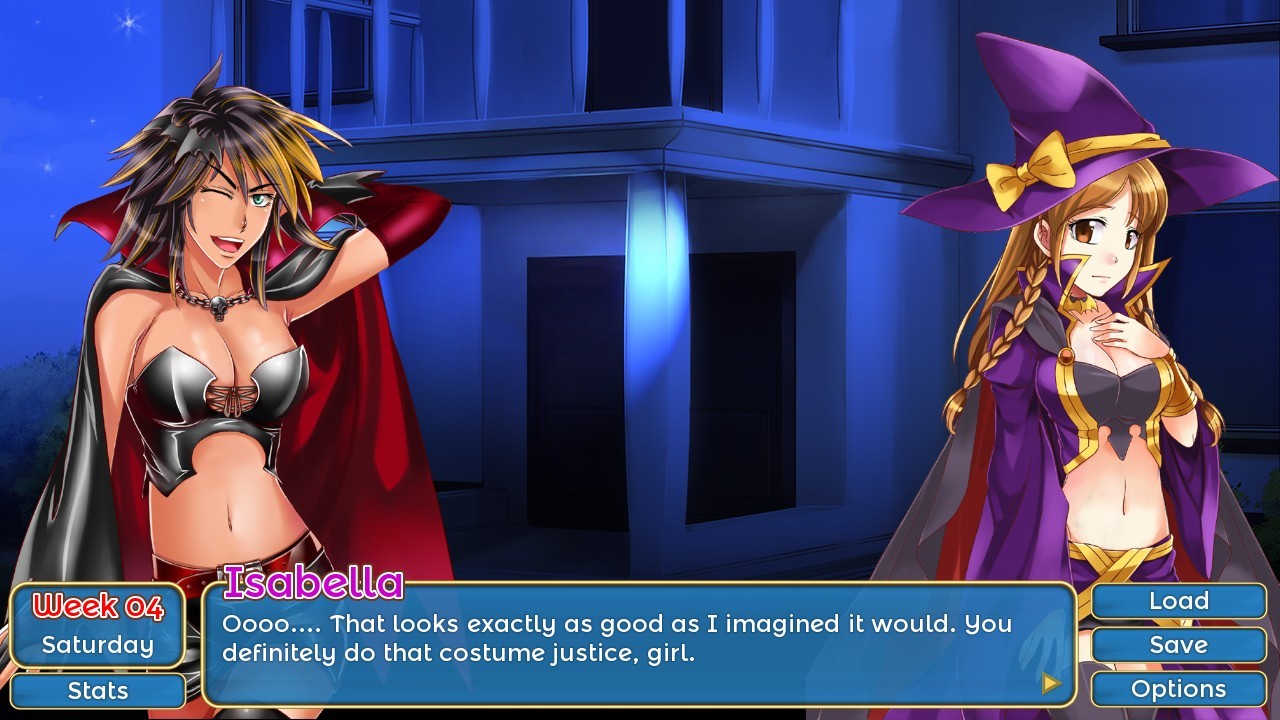 Another day, another visual novel. This time it’s Roommates by Winter Wolves for the PS4. I’ve played this on Steam and the only real difference between this version and the Steam one is that there is an optional Suggestive Content Filter for nudity. The game allows you to choose between the self-proclaimed rock God Max or timid, bookish Anne to start your first year of college. The game also includes a stat manager, and in between those instances is where you uncover the secrets and daily lives of those who live in Latin House.

You’ll notice very quickly that everyone else wears whatever they want and only Anne and a couple side characters all wear the same school uniform save for a few instances where she wears something different. Anne doesn’t even get a uniform for her job. On top of that, no one has over 2 poses. For example, Isabella pretty much is seen with one hand behind her head the entire time. That’s just lazy. Speaking of lazy, you see the interior of your roommate’s rooms and later in the game, you have the option to bring a guest home for the holidays. Your room is actually a straight lift of someone else’s room design. Like the devs just lifted Dominic’s room, and it’s suddenly your room at the parents’ house. So several background images are reused throughout with no recolours. 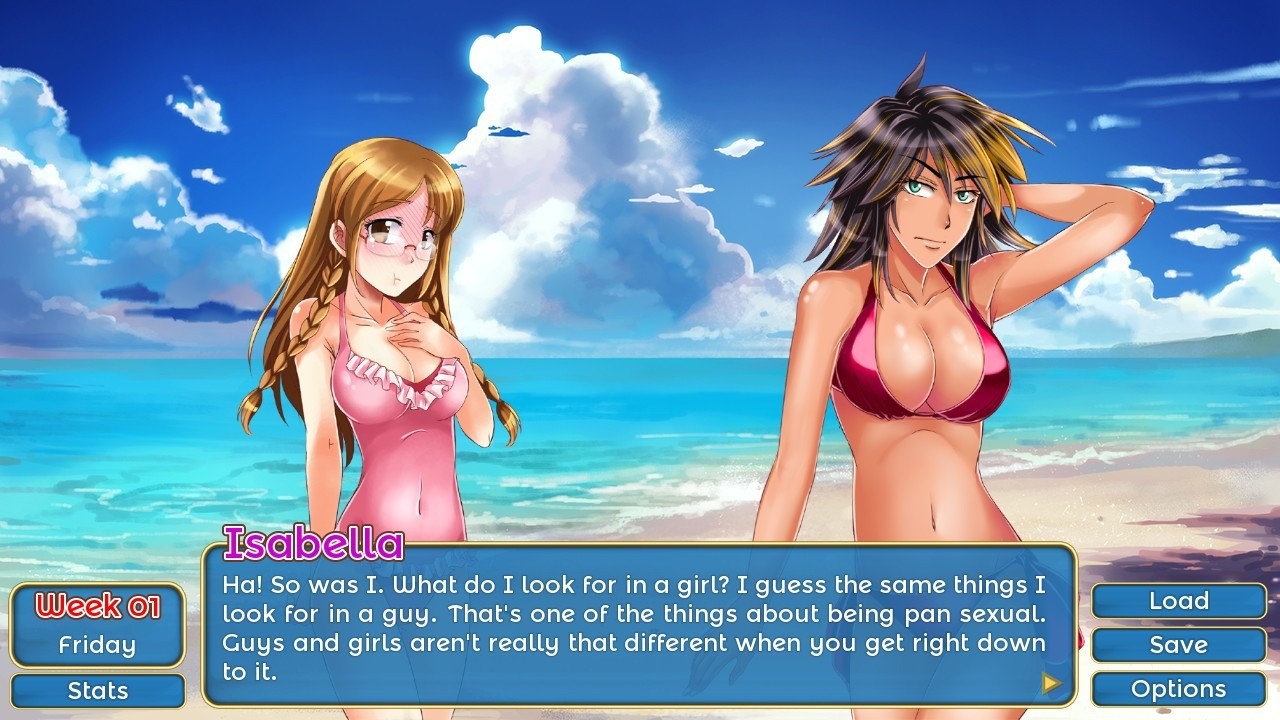 Onto the next frustrating thing: The stat management system. It’s terrible, complicated, and makes Roommates feel more like a strategy game because if you don’t plan just right, you won’t get the corresponding romance options\events. What the game also doesn’t tell you until you get to the end of the game is that there a hidden stat requirement. What’s more is that the hidden stat requirement notification comes up AFTER you get an ending, basically telling you to go back and get more points if you want to see your couple stay together. Yep.

Speaking of stats, your calendar comprises jobs and activities you can do. Depending on who you romance, they will have 2 stats that you need to get points for. Each particular activity will give you a certain number of points in organized, rational, creative, spontaneous, reflective, and active stats. You will also have a learning stat, but that’s not clearly explained either. I didn’t find that studying and going to class a lot made any difference in my playthrough. You also have to watch your money and energy because activities cost money while doing them or going to class cost energy. Napping or sleeping regenerates energy. If your energy reaches zero, you will skip events because you’re tired. Same for money, no money, no activity.

At the end of Roommates , if you played your cards right, you will read a few lines of flavour text with no new splash art or images of you and your beloved. The game will let you know if you didn’t meet the hidden stat requirement after you read your ending. The only way I could get that hidden requirement was completely ignoring everyone else’s requests and only doing the activities that got me the most points for the specific person. After that, it becomes a slog, speeding your way through it just to see something different. Surprise! You don’t.

The perfect thing is just 2-3 lines of flavour text. During your playthrough, you have not one but two whole screenshots of your character with your romance option. The only reason to go for the Perfect Ending is because you want to. It’s only there so that your character and romance option don’t break up. Otherwise, without meeting that hidden stat requirement, spoiler alert, you’ll break up with them. 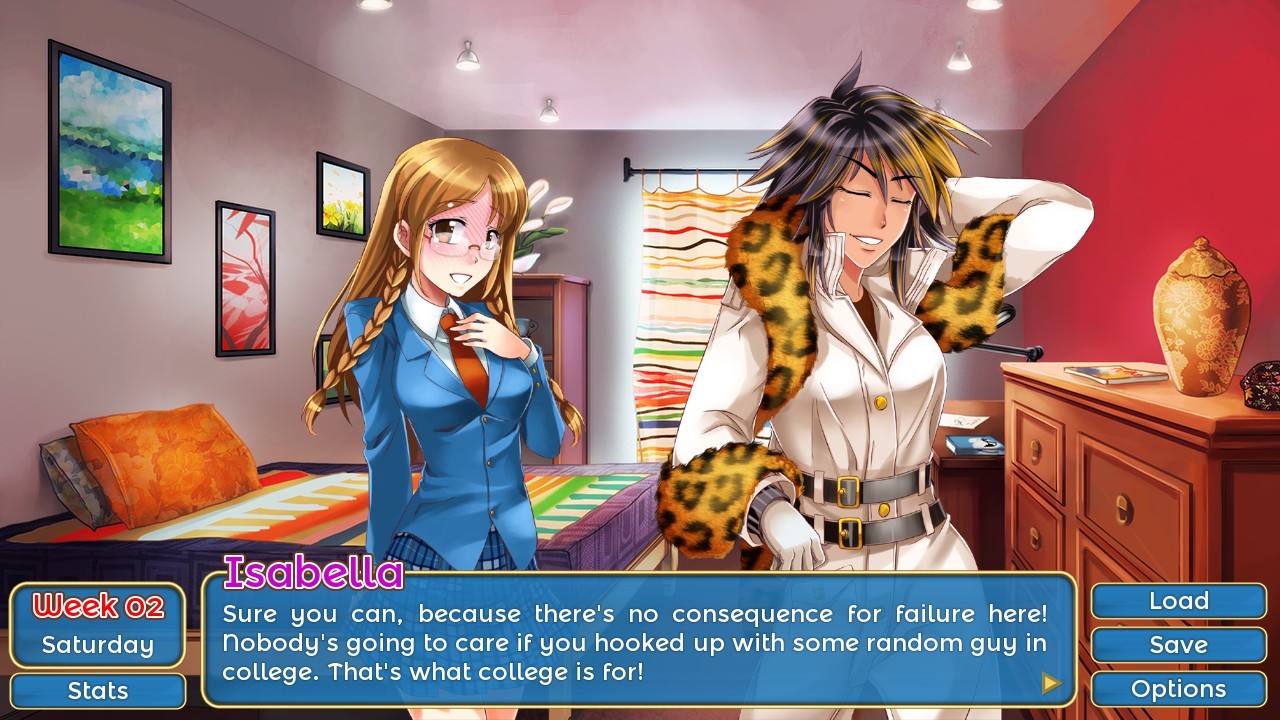 The characters in Roommates are insufferable and tropey. By that I mean, you have Good Guy Dominic who always wants to do the right thing, but is somehow still a hypocrite, Max, who because he’s a rock god, he talks to and flirts with all the girls and gets shit faced drink all the time, Sally, who is vegan and will catch a case when you don’t like her vegan foods, Rakesh, who’s an artist and is eccentric and is therefore weird by proxy, Anne, who is a shy country girl who FINALLY reaches her final form when she steps out into the big wide world because college, and finally Isabella, who dates a guy that looks exactly like the meme Chad (which might be intentional) and you would assume sleeps with everything that walks, but is instead a wholesome family girl.

The dialogue is cringy at times and sometimes funny in others. Roommates felt really rushed towards the end of the game after Spring Break, and I spent more time trying to get my schedules just right than reading the often forced exchanges just for the sake of continuity. The entire soundtrack is composed by Leetstreet Boys and the main song, Name in Lights, is constantly used as background music in some form and also blares the moment you start the game. The music fits the theme of the game, though.

Roommates doesn’t make it easy to get the perfect ending with your beloved. It feels a lot like trying to pass an exam with how carefully activities and jobs have to be scheduled. From reusing multiple backgrounds to characters that feel paper thin, Roommates is best played without stressing over perfecting the stat manager and just enjoying it for the visual novel aspect. Because once you try to crunch numbers, you’ll spend most of your time reloading if you don’t get the stats just right and the game will just end up feeling more like homework.

Roommates doesn’t make it easy to get the perfect ending with your beloved. It feels a lot like trying to pass an exam with how carefully activities and jobs have to be scheduled.