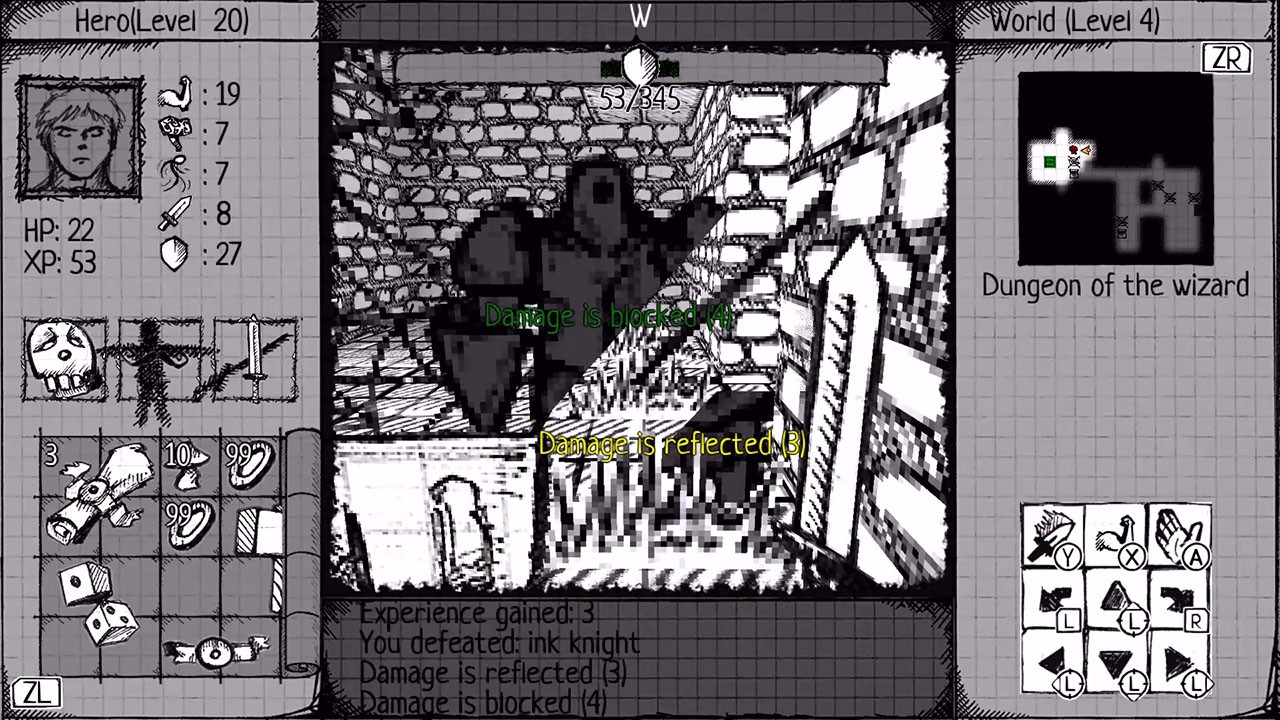 Drawngeon: Dungeons of Ink and Paper is a dungeon crawling RPG from DarkDes labs set in the style of more traditional pen and paper games. Choose your gender and class of hero and embark on a procedurally generated adventure in a world whose art style is one rarely seen.

The first thing to comment on is the one thing you can’t help but notice. The entire world is hand drawn. Opening the bonus features of the game shows that the entire game has been hand drawn by the developers to give it a beautiful retro aesthetic. The objects and characters you interact with are 2D sprites that rotate on their axis so they are always facing you and the design of the world and it’s inhabitants creates a charming, yet eerie backdrop for your adventure.

After selecting your character’s gender and class (one of three from warrior, magician / wizard or trickster / rogue) you are dropped into ink town. This is a perfect time to go through the controls as you are restricted to the 4 compass points in terms of movement.  Intuitively you will try and use the right control stick to rotate your camera to find the best you get is a slight glance. In order to turn you need to use the shoulder buttons to rotate your field of view in true retro style. This can make things seem a bit “clunky” at times but is designed to fit with the feel of the game.  Likewise enemies move in a similar fashion so the movement doesn’t put you at a disadvantage.

As you traverse the dungeons you encounter enemies, NPCs and other objects such as loot crates and cats (yes cats). The crates can yield weapons and other items to fill your inventory, which you can equip into one of three spaces (Weapon, Clothing or Other) but the inventory gets full very quickly so management is a key. Chests can also reveal hidden secrets, some unwelcome so take care adventurer! 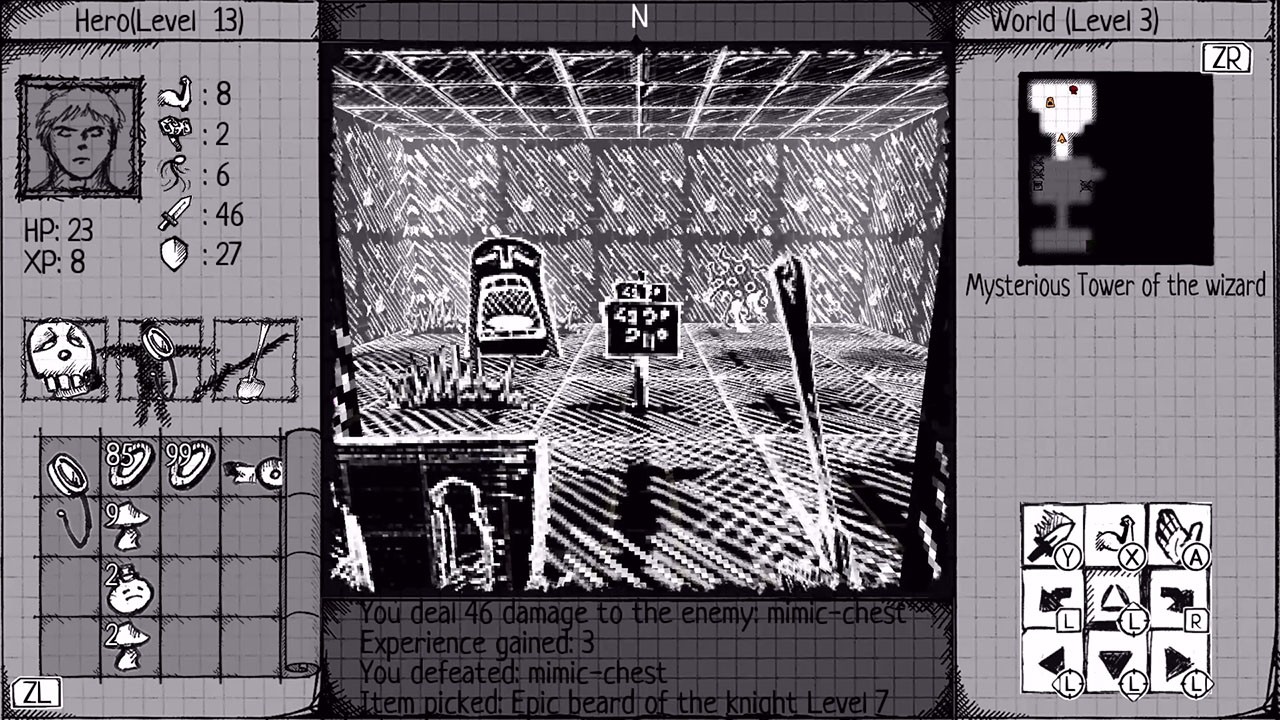 Combat is very simplistic and in real time, so there is little strategy other than ensuring you deal more damage with your weapon per turn than your enemy.  Warriors have the ability to block damage and wearing pieces of armor can reduce the amount of damage taken. And there are obviously ways to heal up.

Items collected can be used, traded with NPCs or tossed into a relic which converts them into gold, which can then be used to buy other items from merchants. Gaining better equipment and items help you to build up your stats while defeating enemies gains experience to level up your hero status.

The UI is fairly simple to use, though it is a lot easier on the switch with the benefit of the touch screen. The inventory can be moved around to maximise space (think inventory management in resident evil games) and selecting items gives you a set of icons to show how to use them.

The other key features of the game is the ability to drop in and out of a game using its save feature. This is pretty useful as it will drop you off exactly at the point you saved and the ability to save isn’t limited to checkpoints or completed dungeons. The other really useful function is the ability to use the meta-progression whenever your character meets an untimely end. This ability allows you to use built up points to equip your replacement hero with items and stats that bring them at least closer to their time of death. 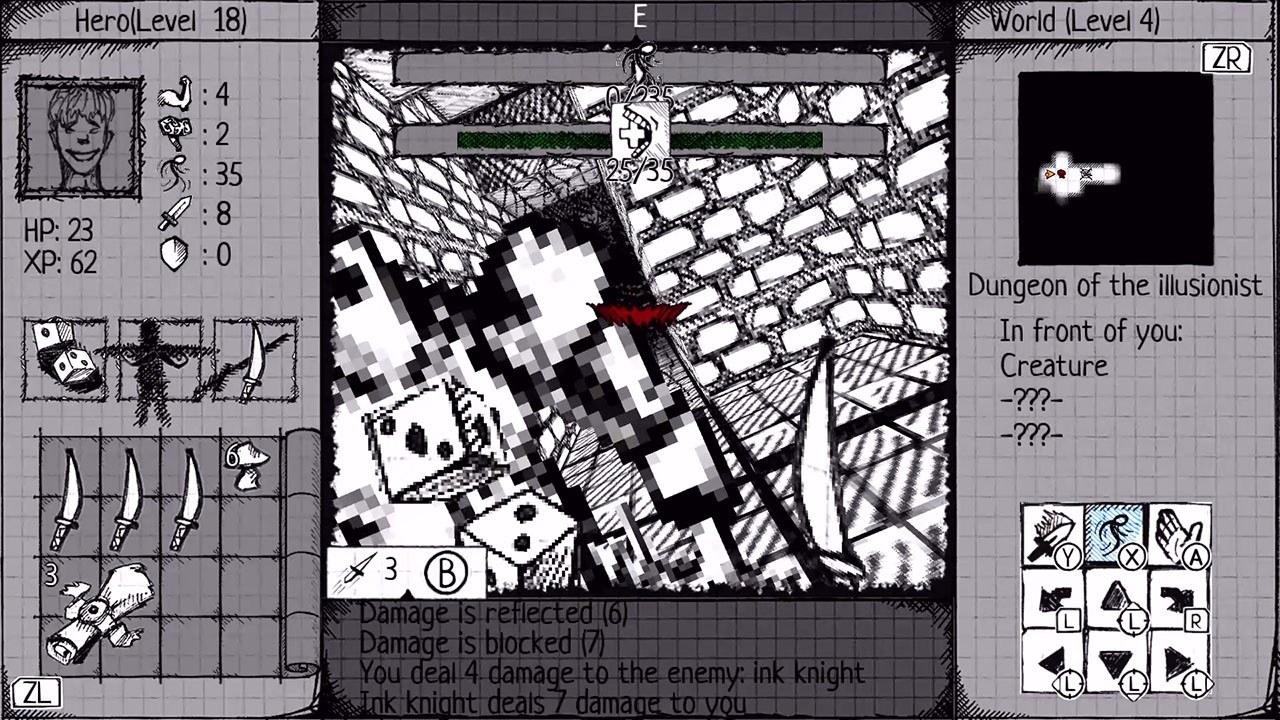 Art style is the only real area that can be discussed as there is little in the way of a sound track. The art style is beautifully hand drawn and credit needs to go to the developers for the level of detail and care they have put into the creation of their world. Tiles look like something an enthusiastic dungeon master has lovingly prepared for their latest campaign and the care and detail of environments is evident throughout.  Characters are drawn on common RPG stereotypes and the regular player will easily identify friend from foe.

The game uses procedurally generated dungeons, so replays will provide variety and surprise to the returning player. It also gives variety into the items that are dropped in chests. Fans of pen and paper style RPGs will have a few issues around how damage is dealt in combat perhaps, or the ability to take advantage of the leveling up mechanics but on the whole should enjoy the experience.

Overall, Drawngeon is a fun game. It has a learning curve from the moment you arrive in ink town and offer help to rid the homes of spiders, but once you establish yourself within the gameplay you quickly find that hours dissolve away as you work through just one more floor.  The added save function is a handy edition that allows players to drop in and out, although if left for a length of time this could create just as much of a problem  as there is no way of recapping your goals, though this is an issue with a number of RPGs and not exclusive to Drawngeon. The final point to note is the incredible value this game represents, which when you consider the time and effort to create the art assets is great value for money. Drawngeon: Dungeons of Ink and Paper is definitely an enjoyable play through for even the most seasoned of adventurer.

RPGs have certainly found their home on the Nintendo Switch, and Drawngeon: Dungeons of Ink and Paper is no exception. Choose your class of character and immerse yourself in the hand drawn world of ink town. Uncover the mystery of the Tower to the east, which suddenly arrived and cursed the land surrounding it. Oh and on the way, if you could find our missing kitties that would be great!

Simple to pick up UI

Clunky controls take some getting used to

Learning curve might be off putting to casual RPG fans