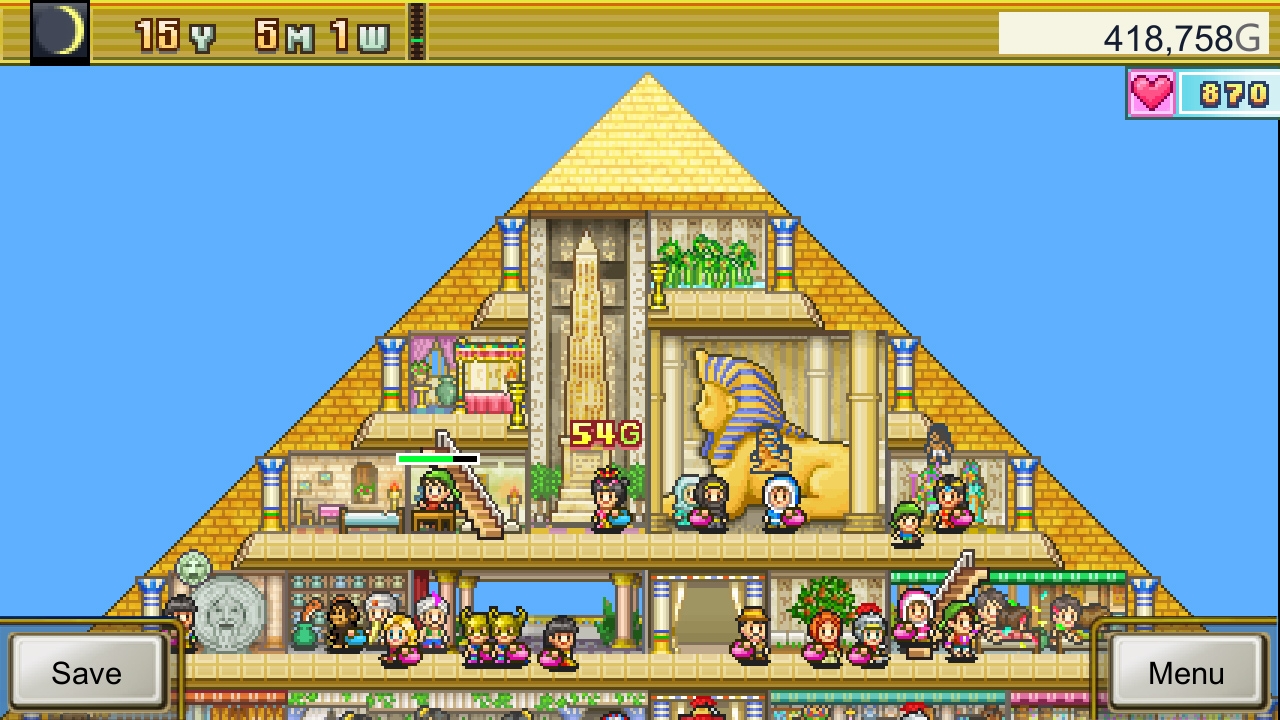 Have you ever looked at a pyramid and thought “pffft, I could do so much better!”? Me either, yet somehow The Pyraplex from Kairosoft caught my eye. The Pyraplex puts you in charge of building the greatest pyramid ever made, one piece at a time. The twist? This pyramid isn’t a tomb, it’s the greatest shopping center ever created!

The Pyraplex starts you off with a handful of rooms, a few loyal workers, and some money, then lets you loose to start building your amazing pyramid. You’ll get optional requests to build or renovate certain kinds of rooms, and there’s a yearly review that grades your pyramid, but it’s all up to you! In fact, a big part of the strategy in The Pyraplex is literally how you shape it: each room you add changes the shape of your pyramid, and while you can fit way more amenities if you build a huge square building, you’re building a PYRAMID; don’t be surprised when you’re rated poorly for not having a magnificent, triangular shape.

The Pyraplex has a lot of systems working with one another to keep things moving along, yet things were almost always manageable. As your workers break blocks for building, you’ll free up new space to build your pyramid. As you complete requests, you’ll unlock new types of rooms and even new events. New workers will be available to hire as your pyramid gets bigger and better, and having additional workers means you can do even more at a time. Eventually, you’ll be able to trade with other countries, and as you gain diplomacy points with them you’ll get new types of shoppers and more countries to trade with, along with the ability to craft items that improve your pyramid even more. 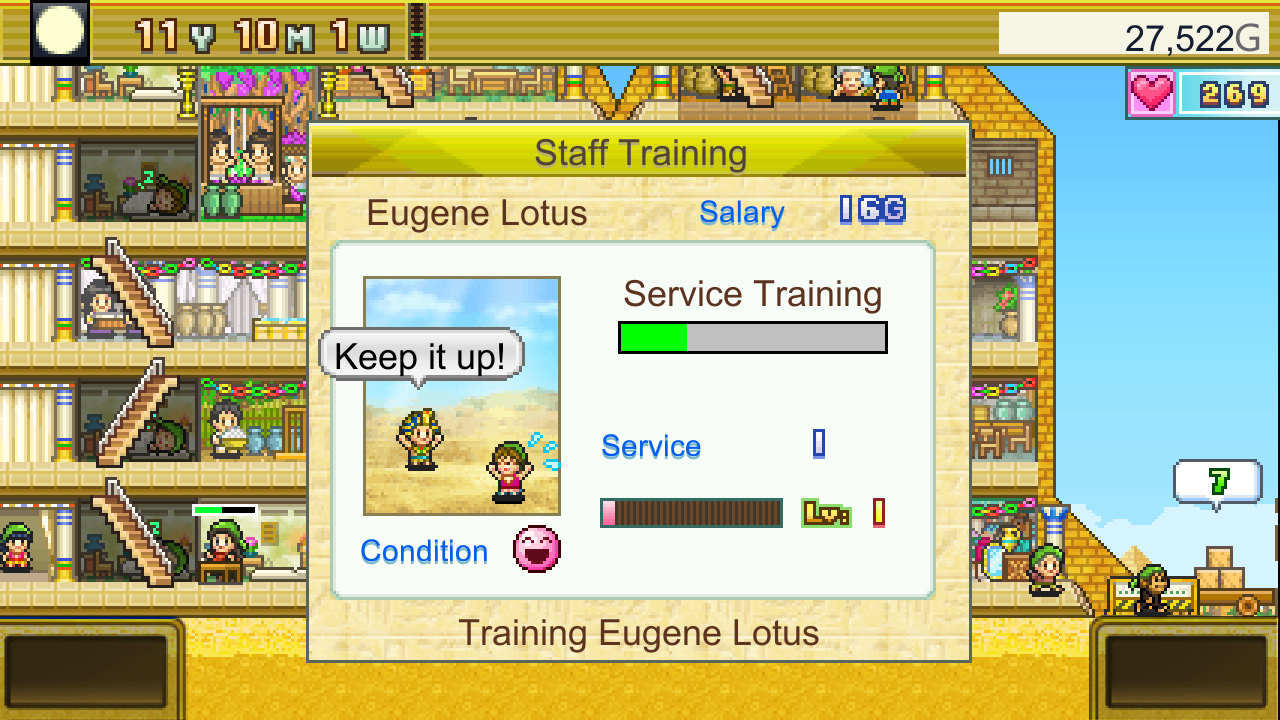 This terrific amount of stuff to do and the consistent progression through The Pyraplex is balanced by a surprising amount of peace. See, it’s impossible to “lose”, but you can do better or worse depending on your skill and how well you understand the game. In fact, the ultimate goal in The Pyraplex is to get as high of a score as you can after 16 years. This score is based on most everything you do in the game, including limited things (getting to max diplomacy level with each country) and unlimited things (getting lots of money, heart points, and stamps). There are no online leaderboards, however, so a lot of the replayability depends on how badly you want to improve on your own score.

Playing The Pyraplex felt a bit like a rollercoaster. I was really confused by what to do and what worked best at first, and then an hour or two into the game I fell into a rhythm of trying to tackle everything at once. This lasted for hours until, around 9 years into the game, I got a five-star rating on my pyramid. Unfortunately, from that point on, it felt like everything was done and I was just killing time for the last 45-ish percent of the game. There was still loads to do, mind you, but I just didn’t feel encouraged to do any of it. I figured, hey, once the game ends I’ll see how I’m scored and then start a new game to see if anything carries over, then be done with The Pyraplex once and for all. I started a new game and something almost magical happened: I was having fun again! In fact, I was having more fun than the first time around now that I knew how the game worked. Plus, with the Power Spots (combinations of rooms next to each other that grant a special bonus) I learned about still unlocked and the abilities of each worker carrying over, things progressed faster the second time around. I ended up playing for hours longer than I meant to without realizing it, and even now I want to play more of it.

That isn’t to say that The Pyraplex is perfect by any means. In addition to the issues with learning the game the first time around, the audio could definitely be improved. The background music seemed like a 15-20 second loop that plays forever, and I never noticed any sound effects, so I just muted the game most of the time. There’s also the case of the block carriers – they’re so irritatingly brainless. No wonder rulers always seem so frustrated! I’d watch three people carrying a total of 10 blocks to a room that needed 3, and they wouldn’t realize the first one got there to complete the building for 10 seconds or so before they move on somewhere else. Other times they’d get one room down to only needing one block, then head over to another building that needed 15+ blocks and almost complete it before finishing the one that was almost done. Then there’s the biggest issue I had: on my first playthrough, my game crashed on me at 4 years, 11 months, and 3 weeks. I restarted the game and loaded my save, but when 4/11/3 rolled around it happened again. And again. And yet again. No matter what I did, the crash was unavoidable, so I started a new game on a different account and it crashed sometime during the 3rd year. Then it happened again. I was really worried I wouldn’t ever be able to experience the whole game, but after the second crash, I never had another. I managed to finish out all 16 years and then get to the 5th year again on my second playthrough without any crashes, glitches, or stutters at all. There wasn’t an update, and I still have no idea what event caused the game to crash, so I’m scared that the same thing will happen to others… but it’s also just as possible that no one else will ever have the same issue. 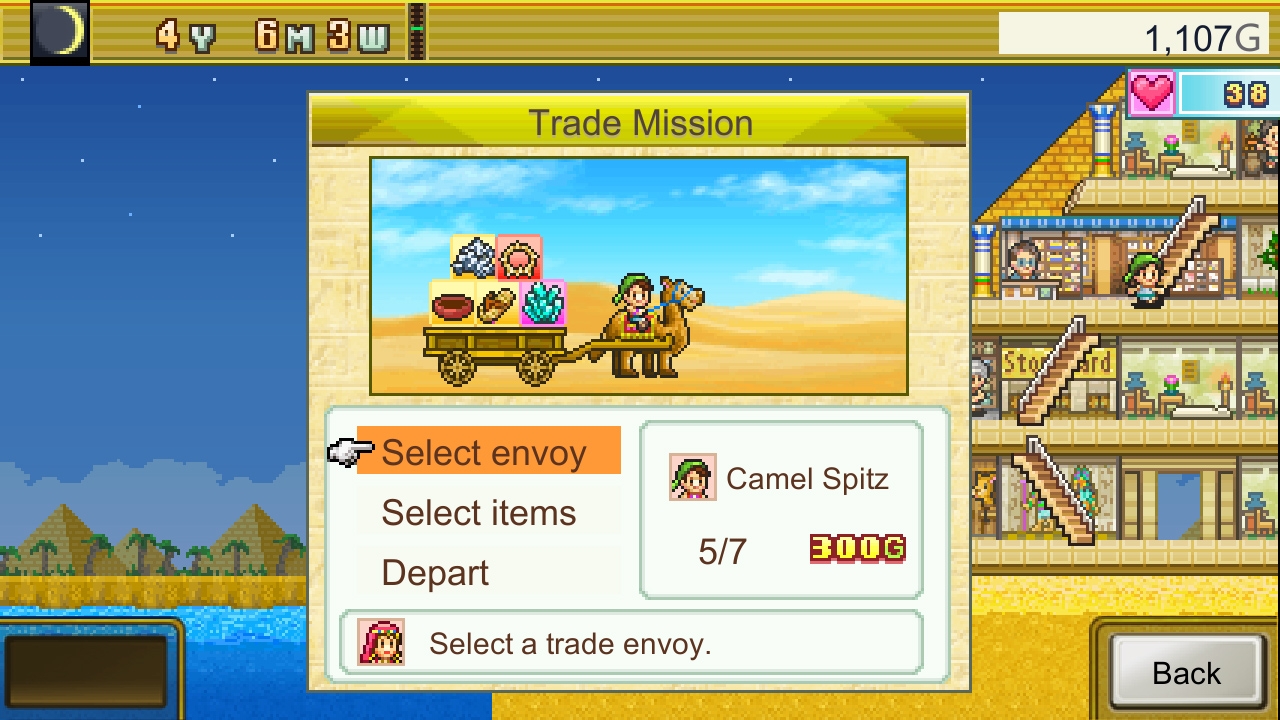 Finally, there are a few things that really would’ve improved the controls. For example, if you want to set lots of different crafts to be made, you’ll have to spend a lot of time watching for them to be finished. There were numerous times when I wanted to be able to give my crafting workers a list of items to make, but instead, I had to go in and manually change what they were making every couple of minutes and keep a list in a notepad file. Setting what items I wanted to trade quickly became frustrating as well; you’re able to send numerous items on each trade mission, and each one has to be selected individually. Want to send 10 polar bears? Have fun selecting each one individually after scrolling halfway through the list of over 35 items! By the end of the game, I was able to send 15 items, and I felt like I could actually craft a real sculpture in the time it took me to set up a trade mission.

Even with all of that said, The Pyraplex is a casual, fun, addictive game with some humor and lots of options. It feels incredibly replayable, although I really wish that the game tracked the record time til players hit a 5-star rating since that’s the main thing I care about. Also, it would’ve been amazing if the game’s “Fast” speed was unlocked upon hitting a 5-star rating for the first time rather than after “completing” the game the first time. It’s also amazing just how long the battery lasts while playing the game handheld, it felt like hours would pass and I’d check the battery life to find I’d only lost 30-40% battery.

The Pyraplex is a casual, fun, addictive game with some humor and lots of options. It feels incredibly replayable, although I really wish that the game tracked the record time til players hit a 5-star rating.