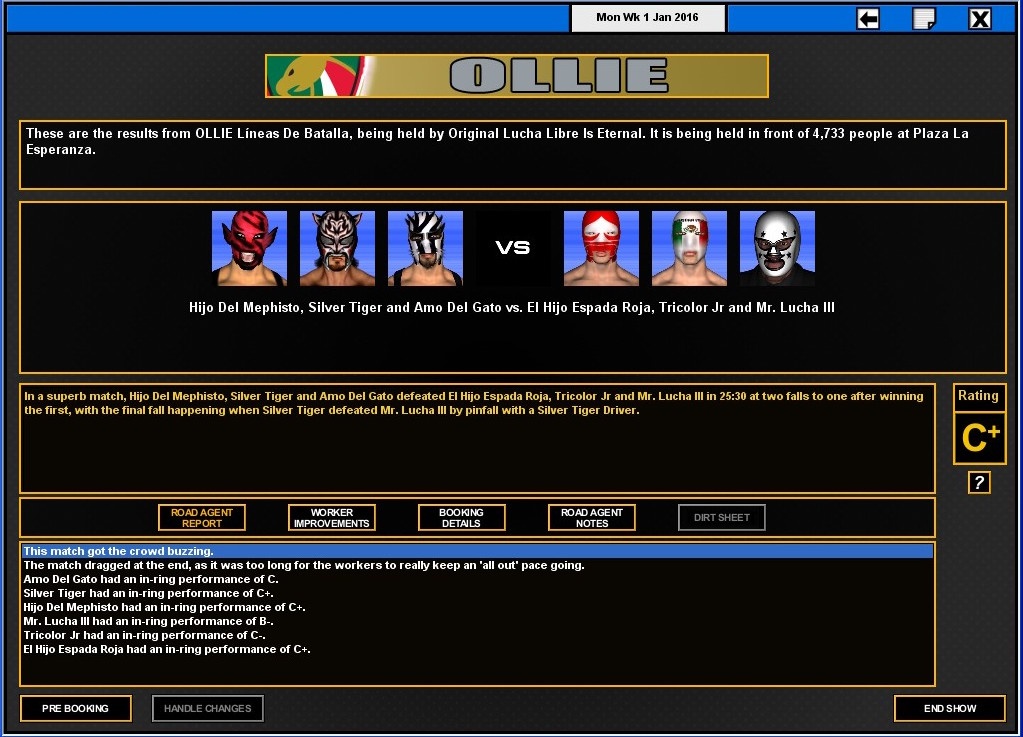 As kids brought up in the UK, my brother and I always looked across the pond to find great wrestling entertainment. They’ve nailed high production values in the USA, whilst in England live wrestling shows always seemed a little cheesy. I’d never say we were hardcore fans of the WWE, but we had action figures and Playstation games – my brother even had an ECW game on his Gameboy Advance! Total Extreme Wrestling 2016 however, gives fans the chance to take on the role of a wrestling promoter or booker. So how does it feel to sit in the place of Vince McMahon, rather than breaking bones as your typical roid-raging wrestlemaniac?

First off I have to say that I’ve played the Football Manager series since 2011, so I’m no stranger to deep sports-based management simulations. That said I’ve never come across a wrestling promotions simulator. I wasn’t at all surprised when I booted up the game to find that the UI looked like one of those lost internet forums from the late 1990s. In a game dominated by text, the UI is basic and unsightly, despite having to stare at it for the entire time of playing. Whilst it could do with some sprucing up to give the title a little more polish, the game truly shines in it’s ability to be flexible in the experience it offers; absorbing both new and veteran players alike.

Total Extreme Wrestling 2016 allows the player to put on weekly free broadcasts, huge pay-per-view (PPV) shows, set up new belts and titles, hiring and firing talent and creating tag-teams/stables. You’ll also be responsible for managing such talent backstage, preventing bust-ups off camera and intervening to patch up fractured relations within the Cornellverse – the TEW series’ very own database of wrestling companies and talent. Players can take over a company as the head honcho, or simply as a booker – giving you an extra challenge as the company owner may step in to impose funding caps or override your decision when hiring/firing talent. 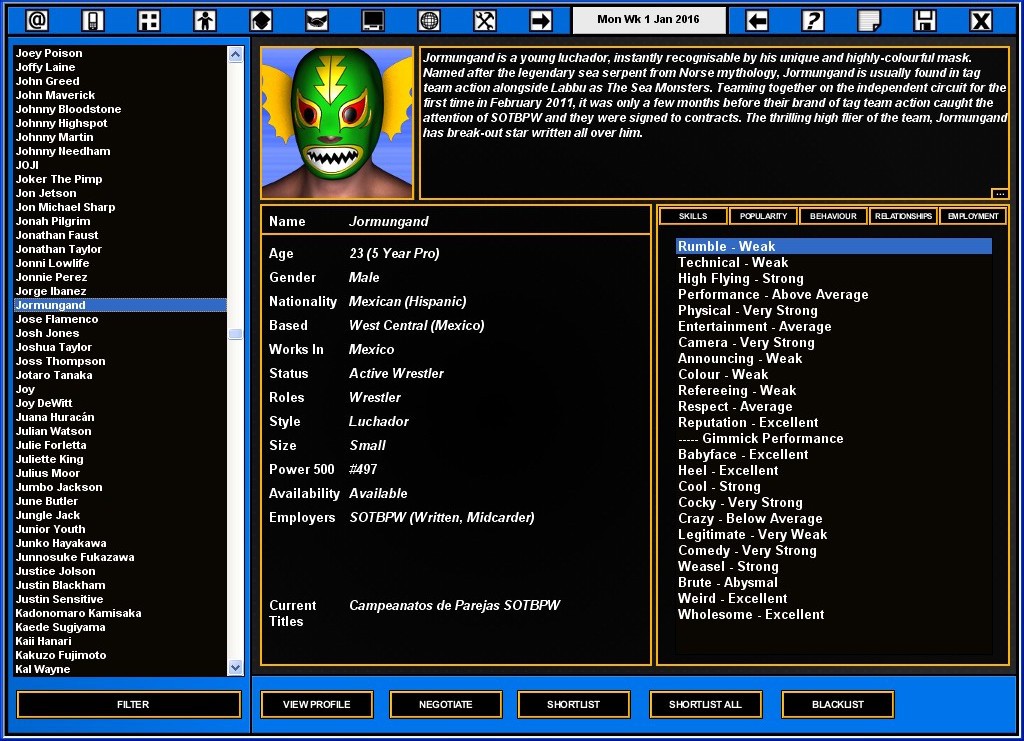 Like I said, I’m new to the series and was expecting quite a tricky and frustrating time ahead upon booting up the game. That said I was pleasantly surprised by the number of “?” buttons and tooltips on offer, despite the already ageing presentation. I found it surprisingly easy to wade through the murky and often confusing wrestling terminology – allowing a n00b like me to hop in and get managing from the outset. It is also possible to disable many of the complex features, making it much easier to get to grips with the TEW universe. That said I tried to get a standard setup going to experience all that TEW16 has to offer.

In Total Extreme Wrestling 2016, you can promote a wrestler to the company figurehead – leading the way and spearheading the company to new heights. Real life examples might include The Rock or Hulk Hogan. In this role they can head up your company as a means of drawing in fans and selling more pay-per-view subscriptions. Players will need to choose their figurehead wisely, as selecting the wrong man or woman for the job can be to the detriment of your company. Not only that but rival wrestling networks will try to poach your figurehead. In TEW16 it is also possible to groom young stars of the future so that one day they can become the figurehead of your company.

One of the coolest features of Total Extreme Wrestling 2016 is the fact that you can set aims within each matchup. You can tailor shows to send the fans on an emotional rollercoaster. For example it’s possible to script so that performers will set the story out, then they’ll go hammer and tongs to try and steal the show, before allowing the audience to have a breather. You can then get your wrestlers to hype up the crowd for a big finale or a “Once In a Lifetime” event such as a Rock vs Undertaker-style match. 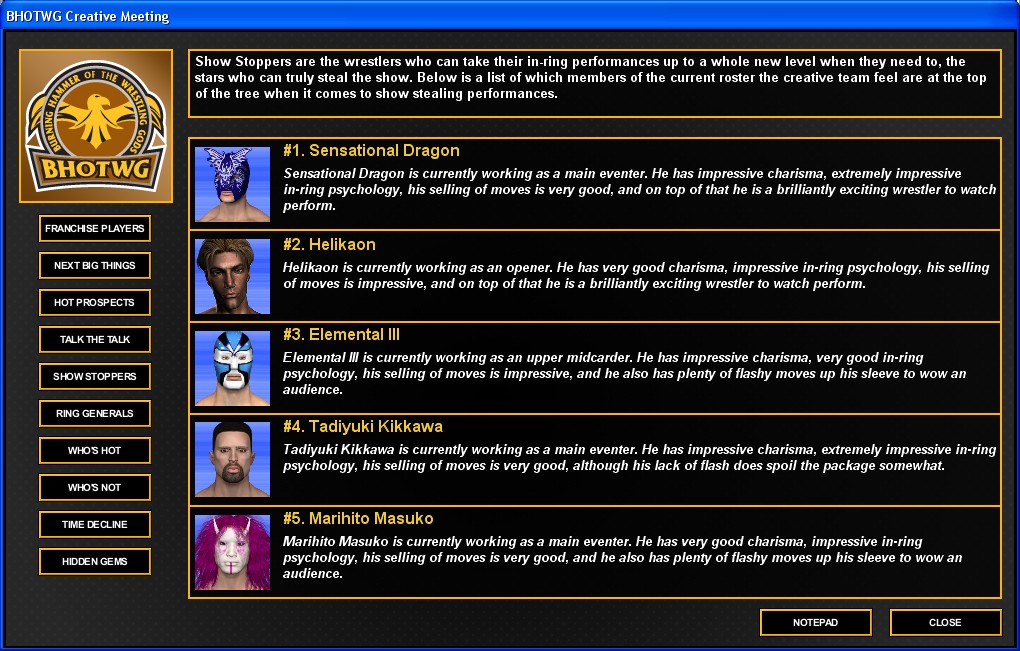 A positive and negative point comes in the form of the alliance system, allowing your company to pair up with others in order to promote a belted event – just like the National Wrestling Alliance of years gone by. It’s a cool feature that from my understanding is new to this edition of the TEW series, but the sticking point comes in the form of not being able to control the alliance in it’s entirety – meaning you can’t control all of it’s members and book big multi-company super shows.

In summary I have to say I really wasn’t expecting to enjoy TEW16 after seeing the UI, which undoubtedly needs a fair amount of work to truly bring the series into the 21st century. On the other hand it’s a solid simulation with deep and meaningful choices to be made, yet not too complex for new players to jump right into. Total Extreme Wrestling 2016 is definitely a thinking man’s game however, so anyone looking for a quick adrenaline fix will be disappointed – yet seeing pro wrestling from the point of view of a businessman is oddly satisfying and I can see fans of wrestling the world over really throwing some serious hours into this one.