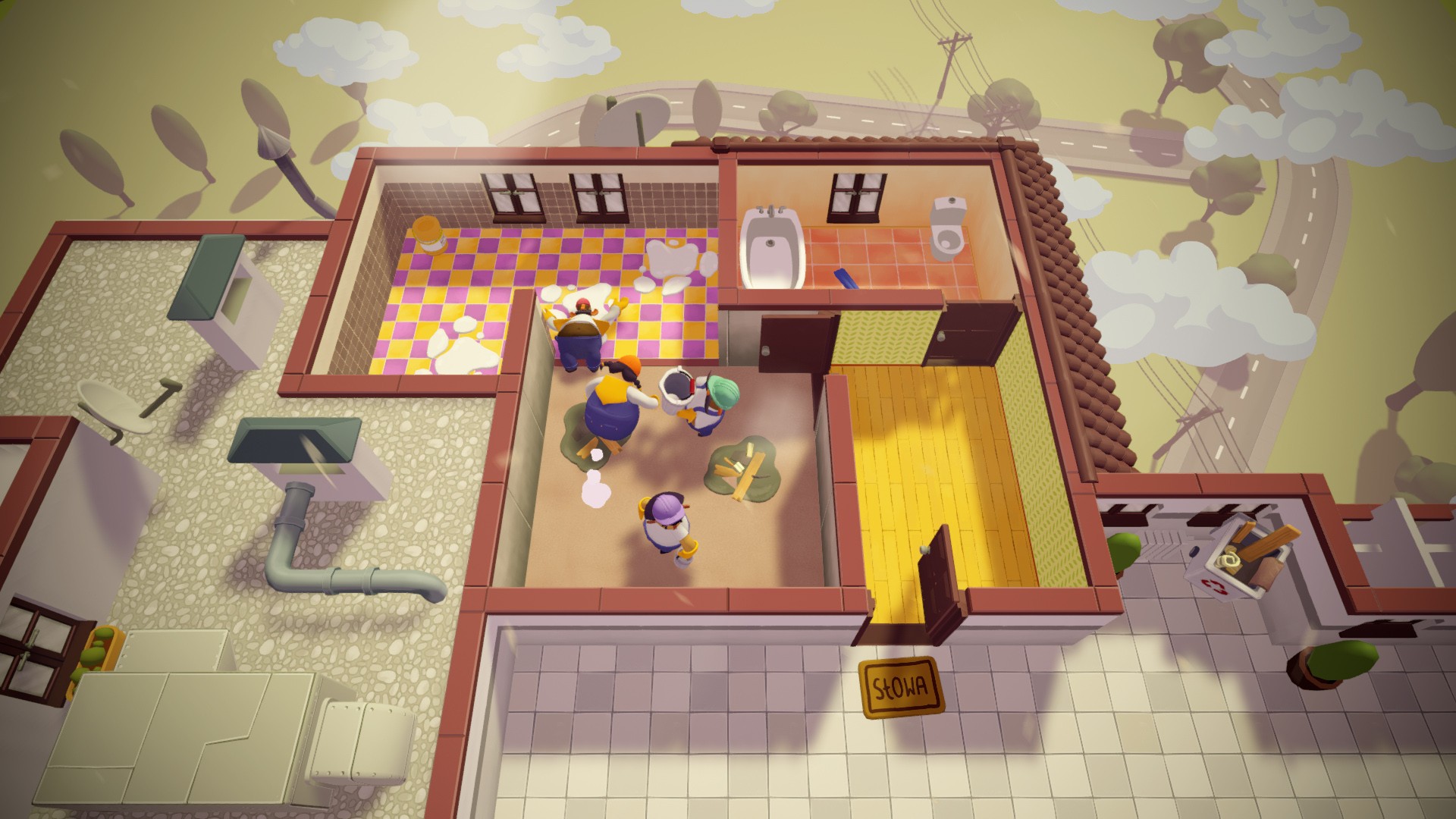 Tools Up a couch co-op game developed by The Knights of Unity. You are tasked with renovating apartments in a mysterious skyscraper. You must work together to complete your building task whilst working against the ticking clock.

This multiplayer game allows 1 to 4 players to work in unity to achieve the multiple goals set across each level. You have limited time to achieve the aims allocated on each stage. As a member of the Tools Up company you have been entrusted by the inhabitants of the apartments to improve their homes. A blueprint found in each level directs you to the goals required to score maximum points. 3 stars are awarded for a perfect run, so strip walls, fix floors and paint rooms. Ensure that you tidy up all your mess and spillages before the time runs out and you too can be the next Lawrence Llewelyn-Bowen.

The Knights of Unity have worked with Team17 previously. Their influence on this title is absolutely clear. A definitive and delightful homage to both Overcooked titles, from the character styling, graphics, music approach and controls. The world map is unique to Tools Up and pays no similarities to Team17’s masterclass titles.

So with Tools Up following such an amazing model will they repeat the success afforded to Overcooked, or will the game be a cheap replica? 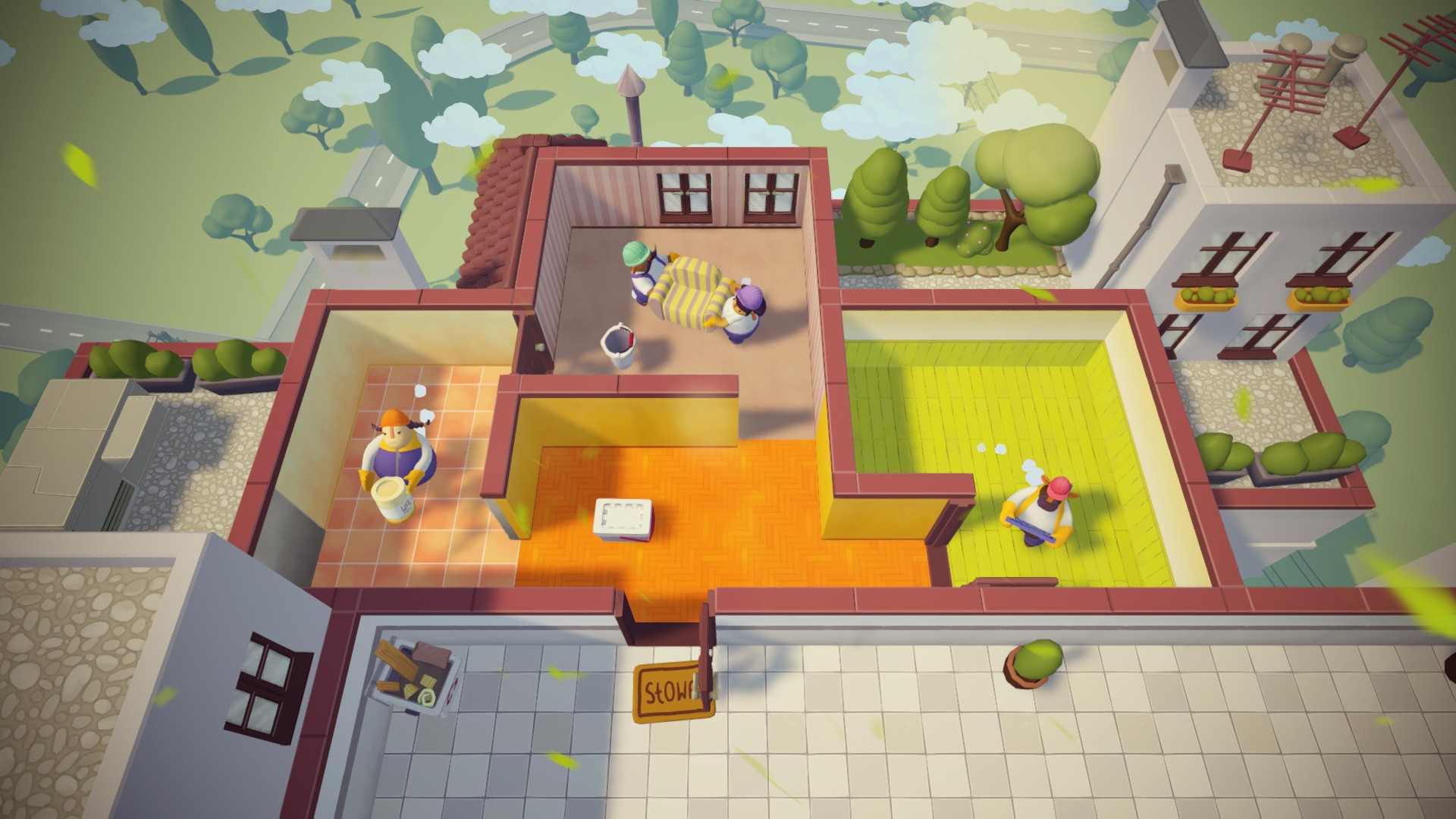 Firstly I have to highlight how fun yet infuriating this game is. I laughed a number of times in every level as the madness unravelled, playing solo and in co-op mode ensured I enjoyed every level equally. Frustrations were present in the game, not because of the gameplay, or graphical mishaps, but mainly down to human error. A spillage of paint and everyone is slipping around like a slapstick sketch, paint is flying everywhere and the working conditions become treacherous. This in turn creates more slippery hazards and all of a sudden it’s down tools time and clean up before someone does themselves a mischief. If you are prone to aggressive or loud outbursts when infuriated, then I’d probably say to prepare your fellow builders as screams of angst will be aplenty.

The game itself is broken down into 2 modes; Campaign and Party. Campaign mode is not story driven, you move from apartment to apartment and floor to floor to complete the goals. Whereas party mode allows you to play any level you have completed, you cannot fail and your task is to try and beat your high score. Both game modes are available for 1 to 4 players. The multiplayer element is only available as a couch co-op, I feel this was a missed opportunity. The majority of players I game with are from different countries and locations, due to the game restraints I am unable to play with them. Don’t get me wrong, a couch co-op game is a fantastic way to bring friends and family together, but this shouldn’t be the only method of team play.

The developers took an extremely simplistic but effective approach to the graphics. The cartoon and artsy style adds to the fun atmosphere that the game play dictates, this is also continued in the character models. You start the game with 4 players to chose from with a select number of skins to alter the appearance to the gamers taste. As the game progresses and you earn more stars, then more choices are available to select from. The characters and skins have no impact on game play and are purely cosmetic, this I believe was an additional error from The Knights of Unity. Once the game is completed they could have added characters through completion of challenges and time trials within the levels, this would have added an aspect of replayability and would have also appeased the addictive nature of the player that likes to gather all collectibles. I would have also liked to have seen a basic version of character traits; speed, agility, power etc. This would have allowed a team of 4 to create a rounded group, where each player would have been able to excel at a certain task.

I found the games pace was dictated heavily by the use of music. A constant hum of Jazz music plays in the background creating a jovial mood. As time counts down to the point of failure the pace increases and the dawning realisation of doom ensures that the ominous feeling of panic will set in. Mix the panic in with your characters nonchalant approach to achieving tasks, and its the perfect storm for anxiety. 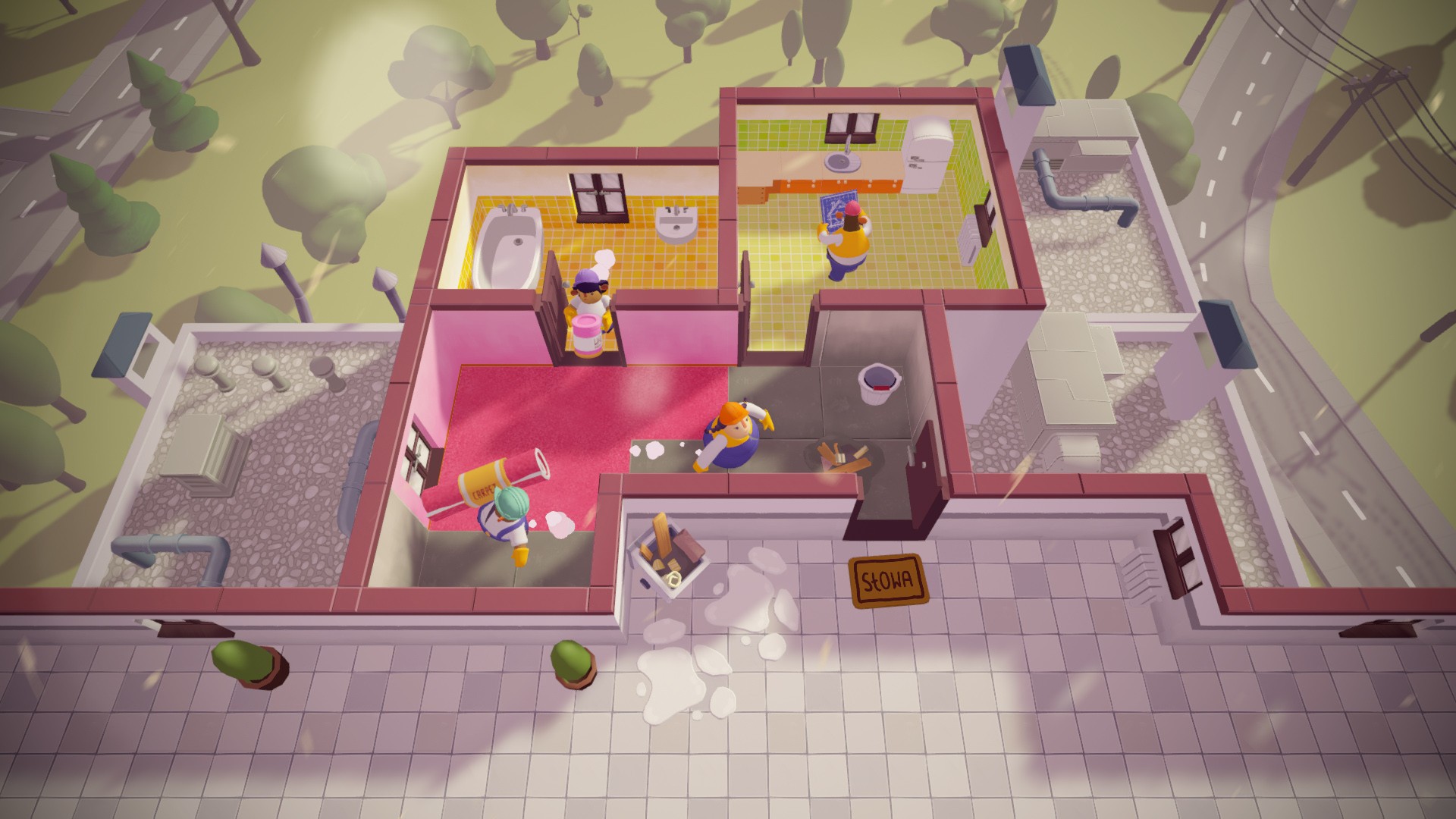 One minor issue that kept rearing its ugly head was when myself or my friends tried to complete the job at hand, it was increasingly difficult to select the correct object. This was pretty much my only negative I can present for Tools Up. Items are highlighted with a white hue, if 2 are located close together it will move the selector between them quite regularly, causing you to either destroy the wrong item, or pickup the wrong resource. Though you can implement gaming methods to work around this, I was still guilty of bellowing some expletives whilst trying and failing to accomplish my jobs. With the rather sensitive item selector being a downside, the upside is the simplistic nature of the control system. A tutorial is shown on each of the level loading screens. The small choice of buttons means that the the controls are simple to master, allowing you to focus all energy on the ensuing bedlam.

The game has a very gentle learning and difficulty curve, each level is playable and can be completed by the solo player. Additional time is gifted to ensure a difficulty balance. The time allocated was sufficient to complete the tasks though I always felt rushed in solo mode, and never really felt this pressure when playing with friends. The real winner for this game is the 1 to 4 player co-op. The chances of error increase vastly when 4 players get together, but you can’t help but love the intoxicating stupidity and errors that this generates. Doors smashing, paint spillages and friends being flung all over each apartment. Perfect communication and team work is required if you are to complete this building project.

For me Tools Up is a perfect family Christmas party game. I can’t help but highly recommend it. Every person I played it with loved every single minute, even the arguments that ensued through poor judgement were fun. I feel that if you were to buy this game then Monopoly would be left on the shelf this year, and the family fall outs will play out on the platform of your choice. With the help of The Knights of Unity, people will soon realise that DIY and household renovations are great fun. It’s time to build up those family bonds with this charmingly simple but addictive couch co-op game.

Tools Up builds a Do-It-Yourself co-op game that will have you laugh as much as you will scream.

No internet Co-op,
Item select can be temperamental,
Characters have no special abilities, just a cosmetic choice.