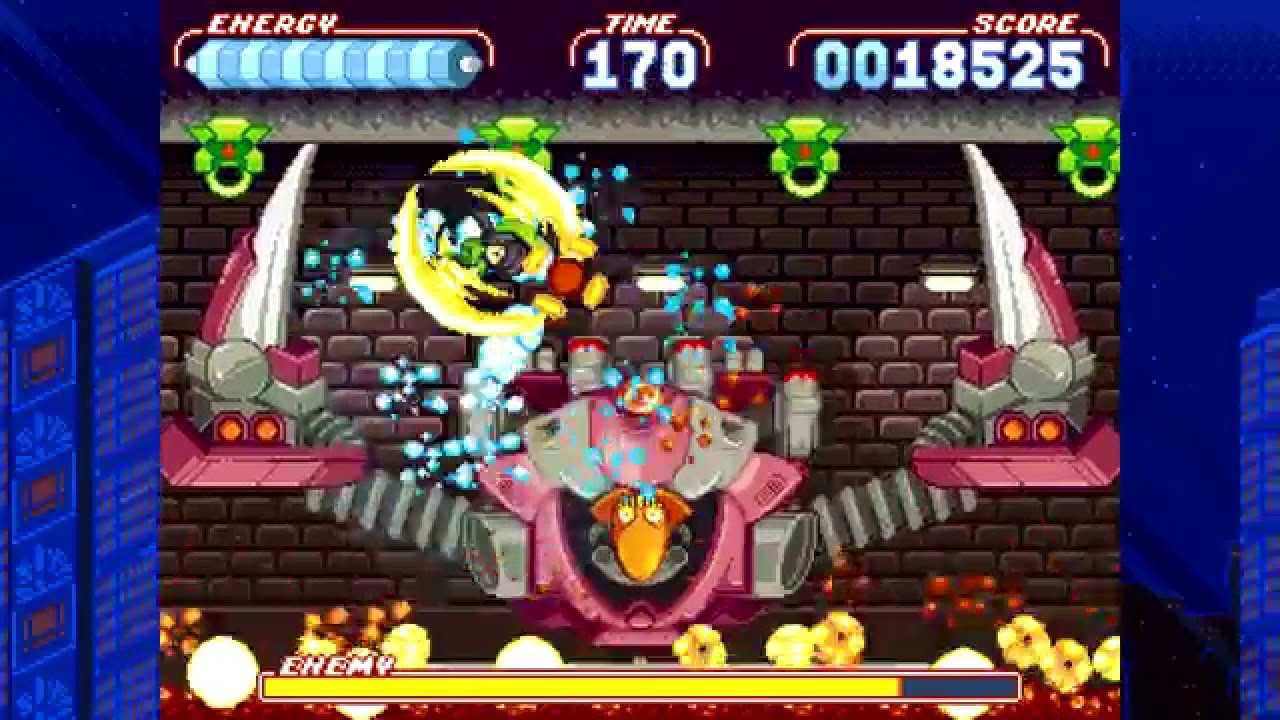 Konjak’s brilliant side-scrolling action game, Noitu Love: Devolution is actually a sequel, but honestly, that really doesn’t matter…..like, at all. Sure, there is a story here revolving around our brilliantly name heroine, Xoda Rap and her compatriots, Rilo and Almond in their ongoing fight against the seemingly endless robotic Darns, but it’s all completely inconsequential and used primarily to put you at the very centre of a visually spectacular battle set across a diverse and beautifully constructed set of locations.

Very similar to the likes of Contra, Metal Slug and in particular, Treasure’s seminal Mega Drive classic, Gunstar Heroes, Noitu Love: Devolution is a fast-paced 2D side-scroller that pays homage to those genre classics while having enough in the way of new ideas and mechanics to make it stand out from its rather illustrious inspirations.

The retro, 16-bit visual style might be a tad overdone at this point, but when it’s implemented as successfully as it is here, it’s hard to get caught up in the idea of derivative art design. The fact of the matter is, this game looks absolutely stunning on the 3DS with the 16-bit visuals proving a perfect fit for the decidedly 16-bit era gameplay. It’s easy to criticise the style for its apparent lack of imagination, but I have seen many games that have tried to ‘update’ the style in line with modern technology, and it often loses the charm that is inherent to a more traditionally pixelated design.

Sadly, as great as the game looks, the complete lack of 3D does come as a disappointment. I appreciate that 3D isn’t everyone’s cup of tea, but when done well, it still has the potential to elevate games on the otherwise technically limited 3DS. You only need to look at the artistically similar (if far more toned down), Super Mutant Mudds to know how great retro-style video games can look in 3D. In fairness to Konjak, 3D implementation was all bit impossible due to the games’ unique control scheme, but that doesn’t make its omission any less disappointing. 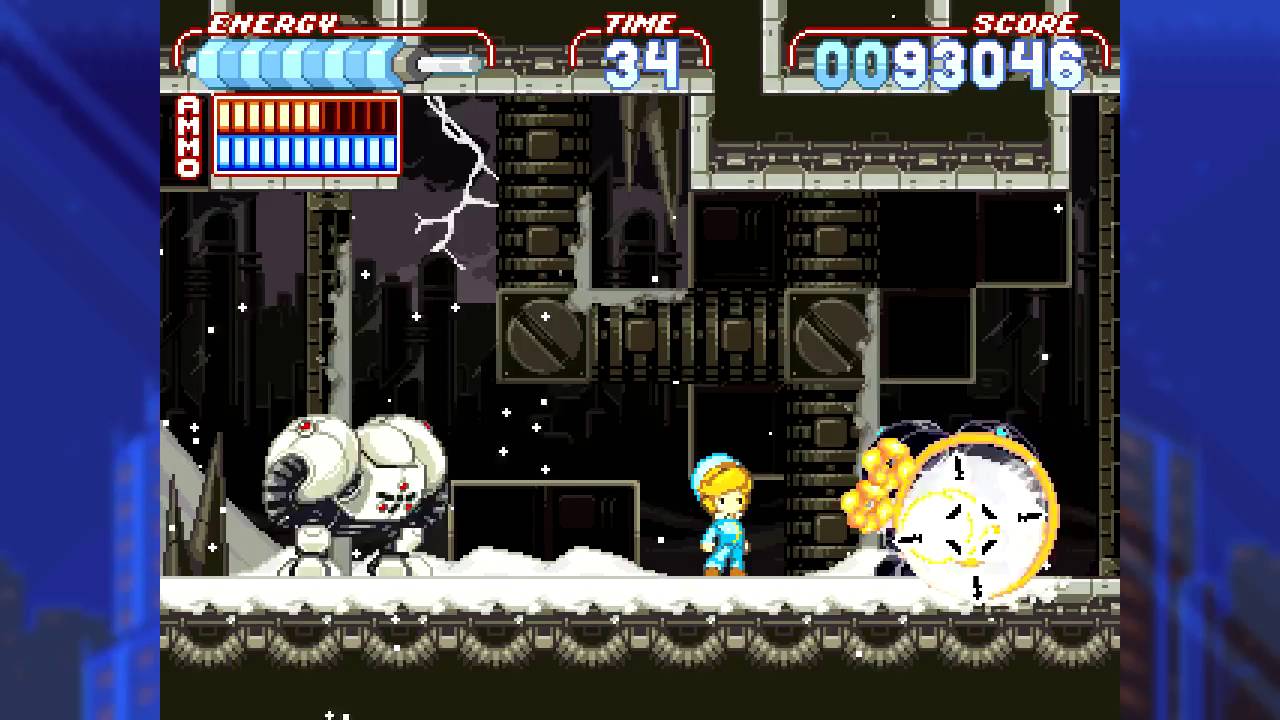 Still, while the lack of 3D is a disappointment, it shouldn’t deter you from what is an otherwise brilliantly old-school gaming experience. It might not be quite as slick or as memorable as the finest that the genre has to offer, but it’s certainly in that company, and with its own unique primary mechanic, it carefully straddles that line between comfortingly familiar and excitingly new.

While movement is handled in the traditional sense, the blisteringly fast melee-heavy combat is controlled largely via touch controls and the use of the 3DS’ stylus. While that might send traditionalists running for the hills, in practice, it actually works incredibly well and goes a long way toward Noitu Love: Devolution feeling surprisingly unique despite its otherwise rather old-fashioned and unquestionably familiar design.

Playing for extended periods can become uncomfortable, and there is no getting around the fact that the use of the Wii Remote pointer and Nunchuk for the Wii U versions remains the ideal way to experience the game, but for the majority of players, Noitu Love is a game that will be experienced in short, quick-fire bursts with the issue of comfort subsequently diminished. The seven stages are all relatively short with the game emphasising gradual improvement over traditional longevity. Still, if you do plan on playing this for any extended length of time, expect to come away with some rather painful hand cramp.

For better or for worse, Noitu Love: Devolution is certainly a short game by modern standards, but true to its arcade roots, its longevity is built upon the addictive nature of its highscore system. It won’t be for everyone of course, but much like Platinum’s best work, half the fun is in replaying levels and beating your own previous best. If anything, Noitu Love is the kind of game that gets notably better with repeated play. You’ll probably be able to complete the game relatively easy first time around, but going back through with an improved skill set and better understanding of the control scheme makes for an increasingly entertaining experience. 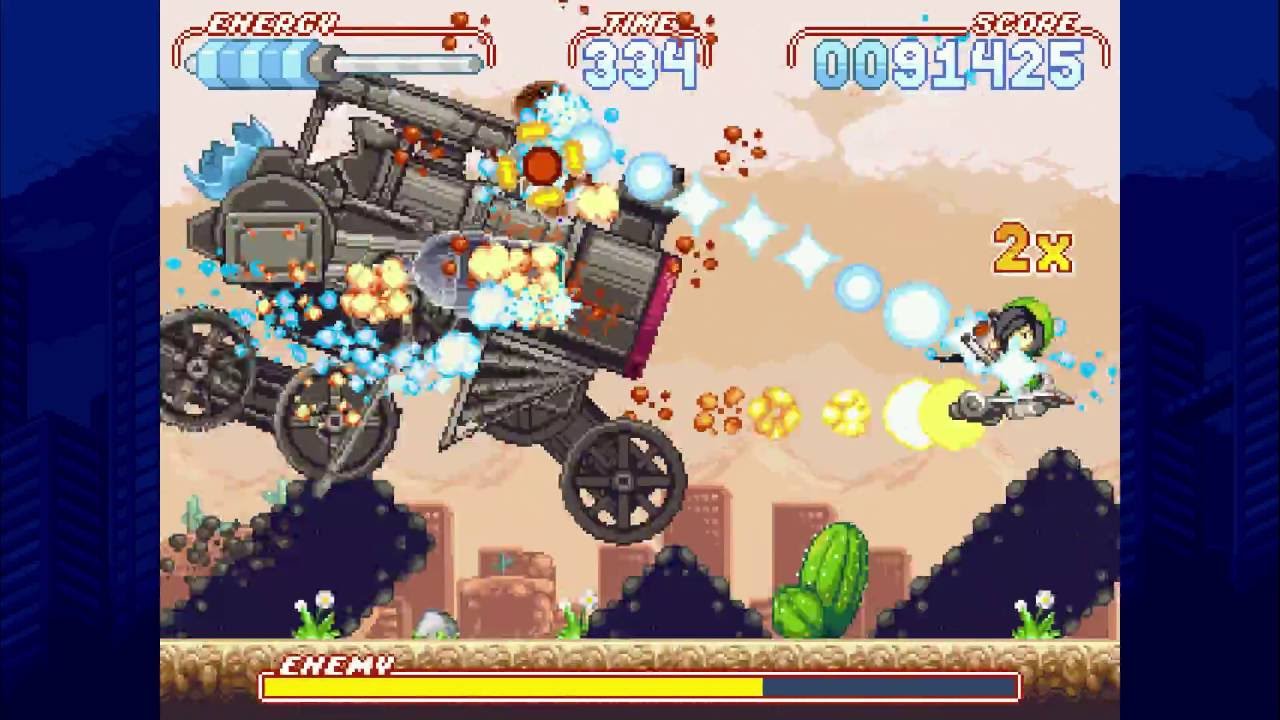 Still, as short as the game might be, what is here certainly doesn’t want for variety. With a host of unique themes and aesthetic styles, each stage is wholly different to the last with all providing a genuinely fantastic take on the primary aesthetic being used. Whether it be feudal Japan, gothic, Castlevania inspired cathedrals, western-set stages or futuristic shooter stages with flying cactus robots (yep, that’s a real thing), Noitu Love: Devolution is nothing if not consistently gorgeous to look at.

It helps of course that each stage is home to its own sub-boss and screen filling end of level encounter. Like any game, they invariably vary in quality, but for the most part, this is high level stuff with the end of level boss’ proving especially imaginative. Whether it be interesting attack patters or gorgeous and creative artistic design, these large-scale encounters rarely disappoint.

Some might criticise the games’ length while others might be disappointed at what they perceive to be a derivative and well-worn art style, but for gamers such as myself, those with fond memories of Treasure’s finest 16-bit output and SNK’s most kinetic side-scrolling action games, Noitu Love: Devolution will prove a welcome and hugely successful return to a genre that has been criminally underutilised in recent years. It might not reach the heights of the genres’ finest examples and the control scheme on 3DS isn’t quite as slick as the Wii U equivalent, but despite these issues, Konjak’s glorious love letter to 90s arcade gaming proves an enjoyable and highly addictive experience.