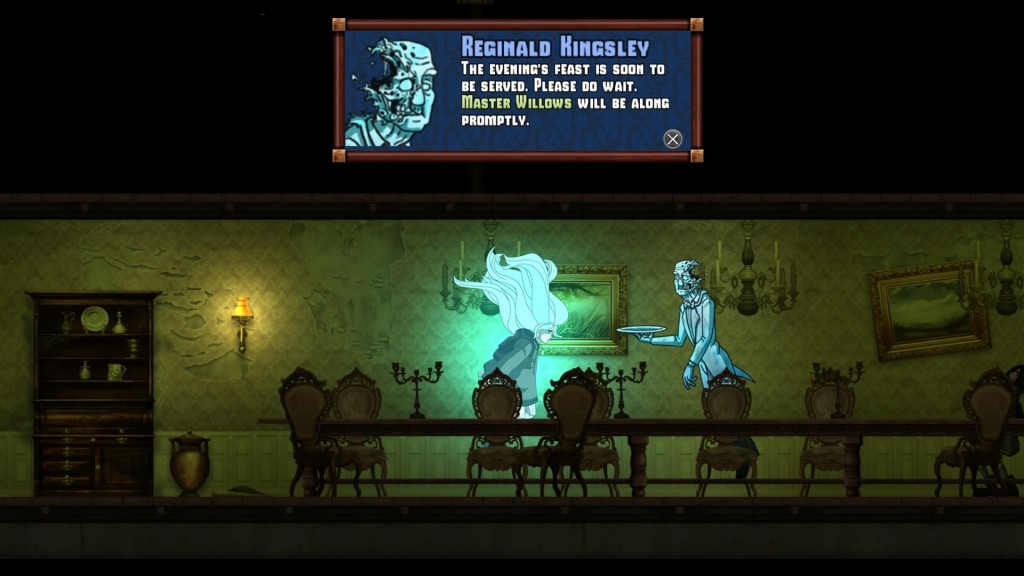 Whispering Willows is a strange little indie game from Night Light Interactive. It’s difficult to categorise by genre as it’s predominantly story driven and rather light on gameplay elements. There is a bit of an adventure game in the sense that there are infantry items and scenery to interact with, although you do spend the game travelling within quite a small space. There are some horror / ghost story elements although any ‘scary’ moments are extremely few and far between. Finally there is some light puzzle solving thrown in, although these are very mundane to the point of being unnecessary. So it’s a light adventure, horror, puzzle game at best.

You play as Elena, a young woman whose father has mysteriously disappeared. He was formally the grounds keeper at a large mansion and hasn’t been seen for days. Unable to sleep, Elena leaps from her bed in the middle of the night and dashes out on a quest to find her lost father. She trespasses onto the mansion’s grounds armed only with a mysterious amulet (a family heirloom belonging to her farther). From this point onwards you have control of Elena and your journey begins.

Whispering Willows is presented from a 2D platform game perspective, but feels a lot more like the classic point and click adventure games of the late 80s and early 90s. It’s basically a point and click adventure without a mouse interface. The game begins in the catacombs underneath the mansion and from there you branch out into the neighbouring locations. Within the grounds you get to explore the gardens, the guest house, observatory, and eventually you’ll gain access to the mansion itself.

What makes this game unique is the spirit system, which is where your amulet comes into play. As the game begins you learn how to use your amulet to exorcise your spirit from your body. Not only can you use your spirit to travel to hard to reach places and posses items such as keys and switches, you can also speak to the spirits of dead people that haunt the grounds. The mansion is plagued with the undead who all have their story to tell. Some will provide you with useful information and others are there to help to fill the gaps in the back story.

From a gameplay perspective ‘Whispering Willows’ doesn’t have a great deal to offer. Elena wonders slowly throughout each location, travelling through many corridors and climbing ladders, occasionally having to deal with minor puzzles which are always easy to solve. As a result the game’s only real redeeming feature is the story which is told via a series of notes, letters and diary entries which are littered throughout the game. You discover a new note in every two to three rooms so you’ll spend a lot of time stopping to read through the various documents.

The notes are written by a variety of different characters, so you get to uncover the story from multiple perspectives. Without revealing too much, the story revolves around Wortham Willows, a ruthless yet deeply troubled man who travelled to the west coast of America to build an empire and create his fortune. On his travels he stumbled across a healthy piece of land inhabited by a tribe of spiritual shaman. It’s here that he decided to build a city, as well as large home for himself and his loved ones. Throughout the story you will discover some of the decisions that Wortham had made throughout his rise to power, as well as the consequences of those actions. 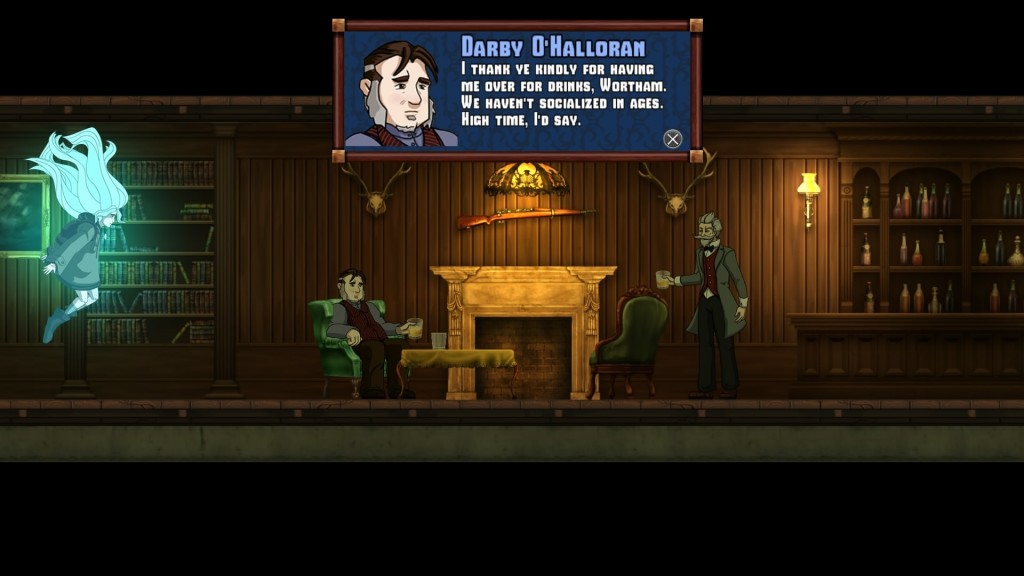 The story raises some interesting points about the nature of greed, loss, regret and in some cases forgiveness. There are some particularly touching moments that revolve around the company Wortham kept around him, but I wouldn’t want to spoil anything. Elena is particularly mature in how she deals with the history of these characters. She is seldom judgemental and sees both the good, as well as the bad in the spirits around her. She is a very passive and peaceful protagonist, which is actually quite refreshing. She is not out for blood or revenge like the protagonists that you’ll likely find in action games.

Elena is very easy to control. You can use either the WiiU Game Pad or Pro Controller, and movement is controlled with either the analogue stick or D-Pad. The face buttons can be rebound in the options menu along with the games sound and brightness settings. With the face buttons you can change to your spirit form, view your inventory, navigate menus and interact with your surroundings. The controls are very easy to pick up and, since the game is played at a relatively slow pace, it’s very user friendly for newcomers.

The game is presented very nicely. The ‘in game’ graphics are well illustrated with some lovely frames of animation. Since the locations are all quite baron and run down, the graphics do not get too much of an opportunity to impress, but a lot of effort has gone into the various textures and characters. One area where this game really sparkles is its use of light. Elements such as rooms and platforms that can’t be seen from the character’s perspective fade in and out depending on your position. There are also flames and lanterns that glow, and some nice dynamic effects when you are in spirit form.

There are also some decent looking cut scene stills with scrolling layers which hold up well most of the time, although they do occasionally slip up in consistency. There was one cut scene which illustrated an altercation between two characters. They were brilliantly drawn, however when one character stabbed the other the wound looked like a child had gone crazy with the airbrush tool in Photoshop.

The sound is actually very good. Ambient sounds within spooky games are often very hard to pull off, however ‘Whispering Willows’ does a much better job than most. There are also some lovely pieces of light piano music which really help to set the tone. One element that I felt this game lacked was the absence of voice acting. Considering that a lot of time is spent either reading notes or wandering around, it would have helped if there was narration during the exploration.

The game is split into four manageable chapters and the overall running time is approximately three hours in length. It’s structured quite well as each chapter deals with a particular sub plot and set of characters. Since you have to assist particular characters at any one time the story doesn’t get too complicated at once. However, as the game is heavily story focused there isn’t really anything by way of replay value. There are no alternative endings or bonuses that I am aware of. You may wish to replay the game if you didn’t find all of the notes but that’s unlikely as they’re all difficult to miss.

In addition to the game’s lack of challenge and progression, I did encounter a few odd design choices. There were a few occasions where the only thing stopping me from sequence breaking was Elena’s own internal monologue saying something along the lines of ‘I don’t think I should do this now’ or ‘I should be doing something else’. This was a really cheap way of structuring the experience. If a bit more effort was put into the design, Elena shouldn’t have the inventory or opportunity needed to sequence break in the first place. The game shouldn’t have to resort to saying ‘come back to this part later’. 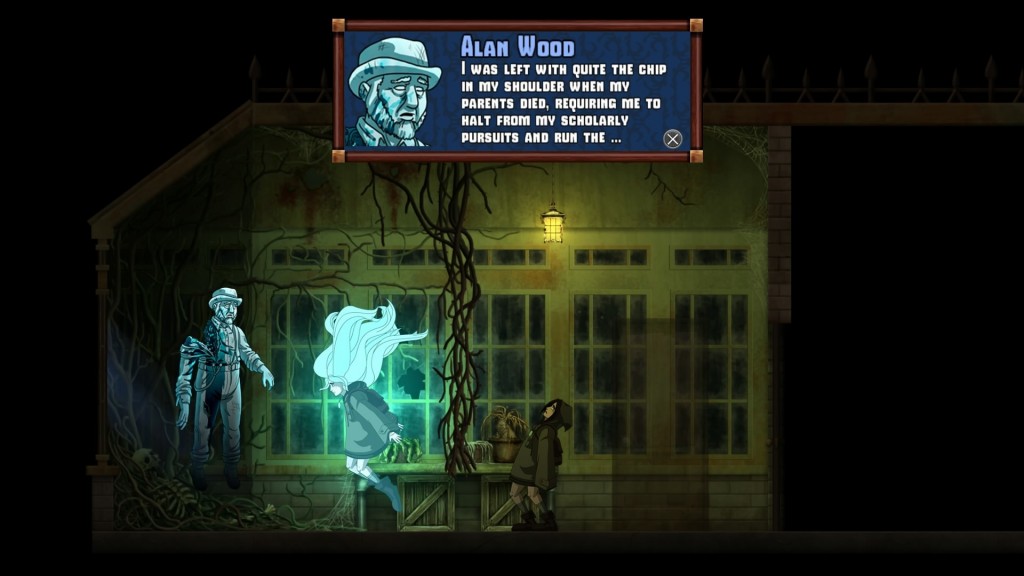 I didn’t encounter any major bugs or glitches while playing, however there is a huge problem with the WiiU version in regards to loading times. Whenever you exit an area it takes around 10 seconds for the next area to load, and since most areas of this game are just sequences of doors and corridors, this happens very frequently. It’s particularly frustrating if you are lost or have taken a wrong turn, and since so many areas look similar this is very easy to do. It felt like I spent a third of the time I was playing staring at the same loading screen. It got very annoying very quickly. I’ve seen footage of the PC and PS4 versions and this problem doesn’t seem to be present in either, however I can’t speak for any other platforms, of which there are many.

In summary, I think ‘Whispering Willows’ can be appreciated, but only by a narrow audience. With a distinct lack of gameplay I think a younger or more casual player may get some joy out of it, especially those who enjoy story driven games. However, I really can’t see this appealing to the wider market. ‘Whispering Willows’ does get a lot of elements right. I can’t really fault the story or presentation, but there isn’t really much of a game here. As a result I found myself getting very bored for the majority of my play through. If you are tempted to give it a try I would recommend avoiding the WiiU version due to its poor loading times.