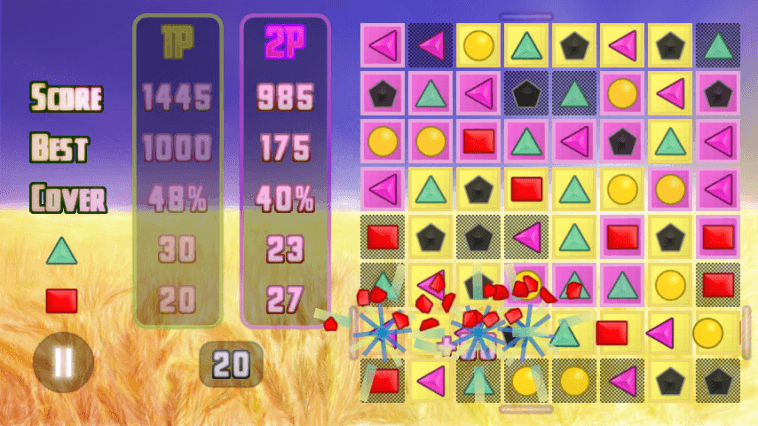 Aenigma Os looks and plays very similar to Candy Crush Saga and all of its various knock-offs. As a result, I was skeptical that the game would be of much quality going into it. However, this Wii U title surprised me with its fun gameplay. Of course, part of that is attributed its addiction factor, mimicking that of typical mobile games. Nevertheless, this game has a lot to offer, more than one would expect from its seemingly simple surface.

First, I’ll talk about the visual and auditory aspects of Aenigma Os. As I was playing the game, I honestly didn’t notice the music much. Part of this is negative, as it lacks a noteworthy soundtrack, failing to add that certain hype factor. However, in this case, I view it as a benefit, as it means the game lacks annoying music or sound effects of any kind. Ultimately, every aspect of the game should work to improve the gameplay experience. In this case the music is nonintrusive. It may not add much to the game, but it certainly doesn’t take anything away, and it serves the simple purpose of preventing silence within the game, something which is almost always a negative.

Visually, this game is very vibrant and exciting, as one would expect from a game of its genre. The colors and shapes within the game are very aesthetically pleasing. In addition, the visuals help to add to the intensity of the game, as plays which earn more points are met with more intense color explosions. The backgrounds of each level are somewhat basic, but it’s almost impossible to pay close attention to the background mid-game, so the backgrounds successfully serve the purpose of making the game less visually boring. 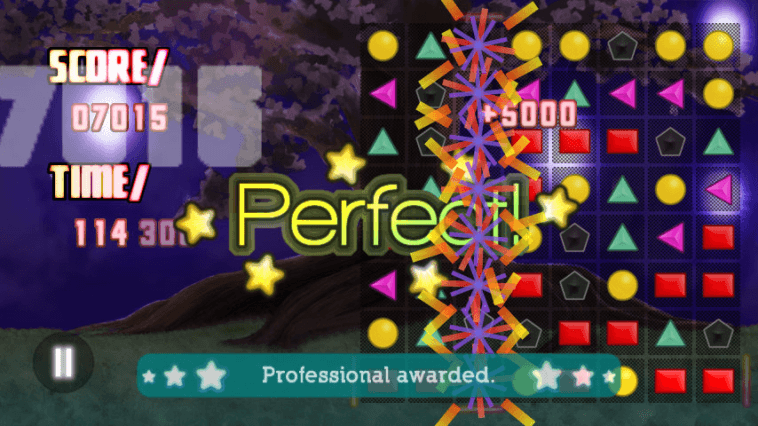 Aenigma Os’ gameplay is fairly simple, especially for anyone with experience with the genre. The goal is to match shapes of the same color in order to clear them from the board. Shapes may count as matches if there are at least three of them with up to two spaces in between them (i.e., one red, one pink, one red, two blacks, and two reds is a match clearing four reds from the board). Players tap on a whichever shape they choose to start on, and drag the stylus in order to clear matching shapes. In addition, the rows move in whichever direction the players swipes in, allowing players to strategically determine how to clear their matches in order to position shapes for further matches. Players earn points for every shape they clear, with more points being awarded for shapes cleared without any gaps between them.

Surprisingly, one aspect of this game I am especially appreciative of is its tutorial. Many of the games I’ve reviewed either feature unskippable tutorials or send you into the gameplay with no explanation of how to play. However, Aenigma Os finds the perfect mix by offering optional tutorials, offering explanations of basic gameplay details as well as descriptions of each of the game’s varying game modes. On that note, perhaps one of the most addicting things about this game is the presence of various modes, offering hours of new and surprisingly challenging gameplay. Of course, the challenge is balanced by hints towards what move to make next, which the game offers the player if they haven’t made a move in a while. 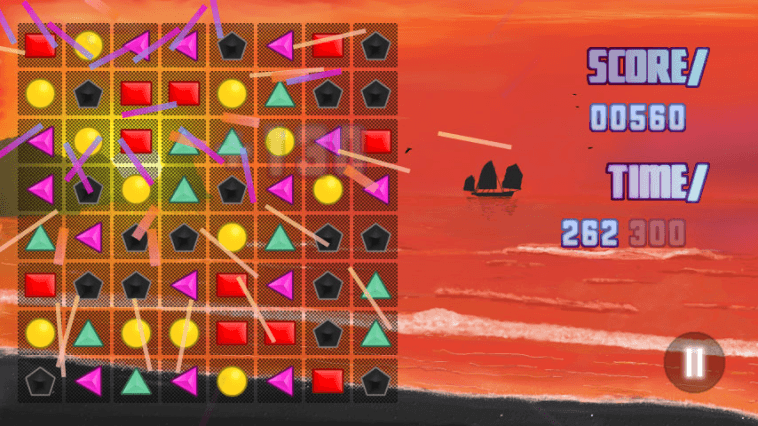 Of course, this game offers arcade and free play modes which are most similar to other games in the swipe and clear mobile genre. However, Aenigma Os also has a unique campaign mode. In this mode, the player plays on a wide array of levels, with each round and level coming with a different objective or method of obtaining points. Interestingly, not every round is compatible with every level. This leaves the player always wondering when they’ll unlock the next stage on their favorite background. In addition, the players has the power of selecting which challenge they will take on within each round, leaving a large portion of the gameplay up to the player’s own choosing.

Another unique and interesting mode is the puzzle mode, unlike anything I’ve ever seen before. The premise is simple. Players must clear shapes in such a way as to move and position other shapes in order to clear them, with the ultimate goal of clearing all of the shapes and moving on to the next round. Of course, they started simple and often laughably easy. However, they quickly escalated in difficulty, really challenging me to think deeply, quite opposite of the more reflex-based style I employed in the other modes. As of now, I was recently stumped by and finished on round 11 out of 50. My point simply is that this mode is huge and really pushes the player to their mental limits.

A large portion of what makes this game fun is something I can’t entirely explain. As I played it, I found myself unwilling to stop, instantly addicted to its charming gameplay. Each new level and gameplay mode brought an interesting new challenge and a desire to keep improving. While I only played a few hours of this game for my review, I feel like I barely scratched the surface of the full extent of content this game has to offer. While it lacks any apparent story (which I guess is possible for a game of this kind), it comes across to me as one of the best games of its genre. The fact that it isn’t a 3DS title admittedly does hurt it, as I feel it would fare much better as a mobile game. Nevertheless, Aenigma Os is well-designed and addicting, and a great purchase for any Wii U owner looking for some time to kill.