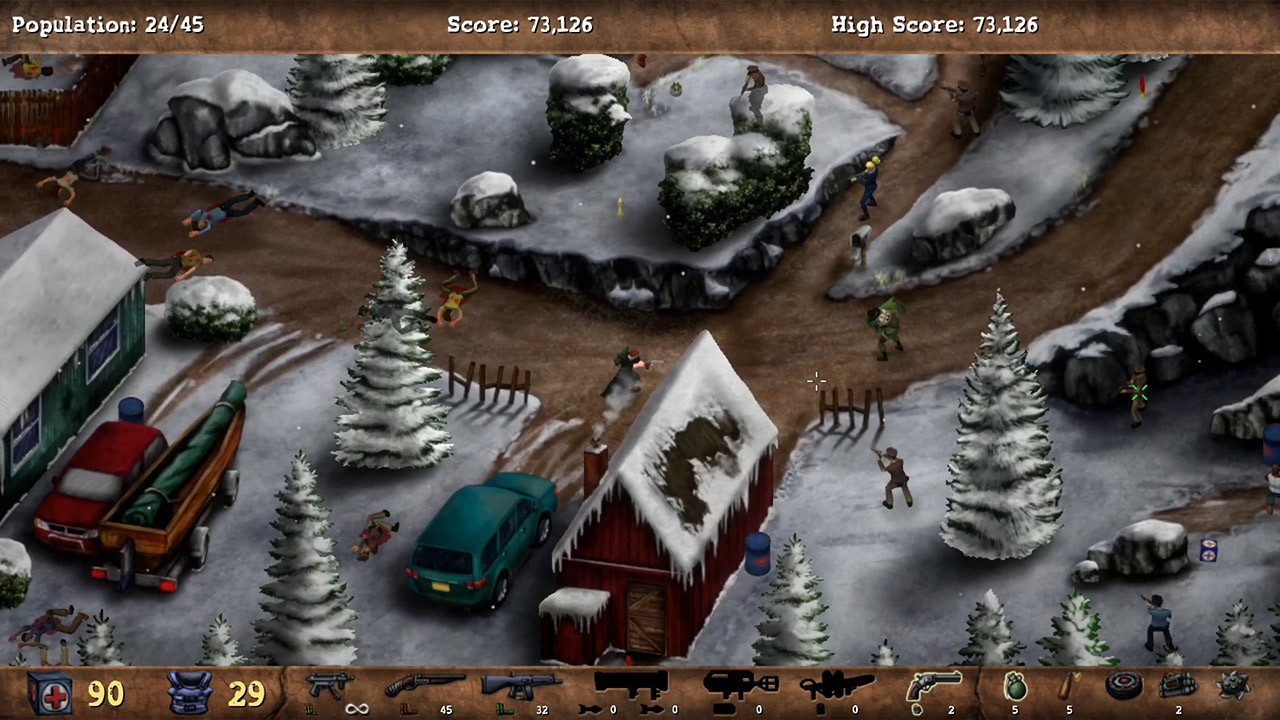 Oh, Postal. For some, especially me, this was the game that started it all. You see, before Postal, a lot of the violence that I saw within video games was directed at distinctly “bad guy” villains. Demons, monsters, wizards, etc. Even when I was shooting at humans, they were bad guys because they were freaking Nazis, and they were also shooting at me. Yet Postal stood front and centre, a proud creation of Running with Scissors, and said, “we are taking a terminology given to disgruntled workers who shoot their coworkers and turning it into a game.” This title drew plenty of ire and raised eyebrows, but it didn’t get the level of vitriol that other shooters had around that era. It’s so interesting: Postal 2, the sequel that I pray comes to the Switch, definitely had more protesting and Bible thumping about it despite it being inarguably a better and more interesting game. Decades later the game Hatred would draw plenty of shocked reactions despite basically being the same as the original Postal, just with better graphics and a more direct “I am killing innocent people” motif. Yet Postal is a part of video game history, tasteful or not, and it’s finally made a release onto the Nintendo Switch with Postal Redux.

The concept of Postal is very, very simple. You are a dude being evicted from your house. One never gets evicted as a result of good and progressive choices, so draw your own backstory here. Unfortunately for everyone, our main character may also be drastically unhinged, so he also believes that the Air Force has gassed his town and he’s the only one unaffected, so everyone trying to hurt him or stop him is clearly insane. What happens next is a bloody trail all the way to the Air Force base that he desires to mow down and then to go well, well beyond the original scope of the first game. Thanks to this Redux edition, the Maniac (as I am prone to call him) ends up going on a global tour, eventually landing in the Dohtonbori district of Osaka, which I am familiar with and was very surprised to see him shooting up. Why? Because mental illness takes on many forms, but the most popular in the media is the crazy person who likes to kill people. However, this isn’t going to be a discussion about portrayals of mental health, this is a video game that makes zero attempts to hide what the purpose is. 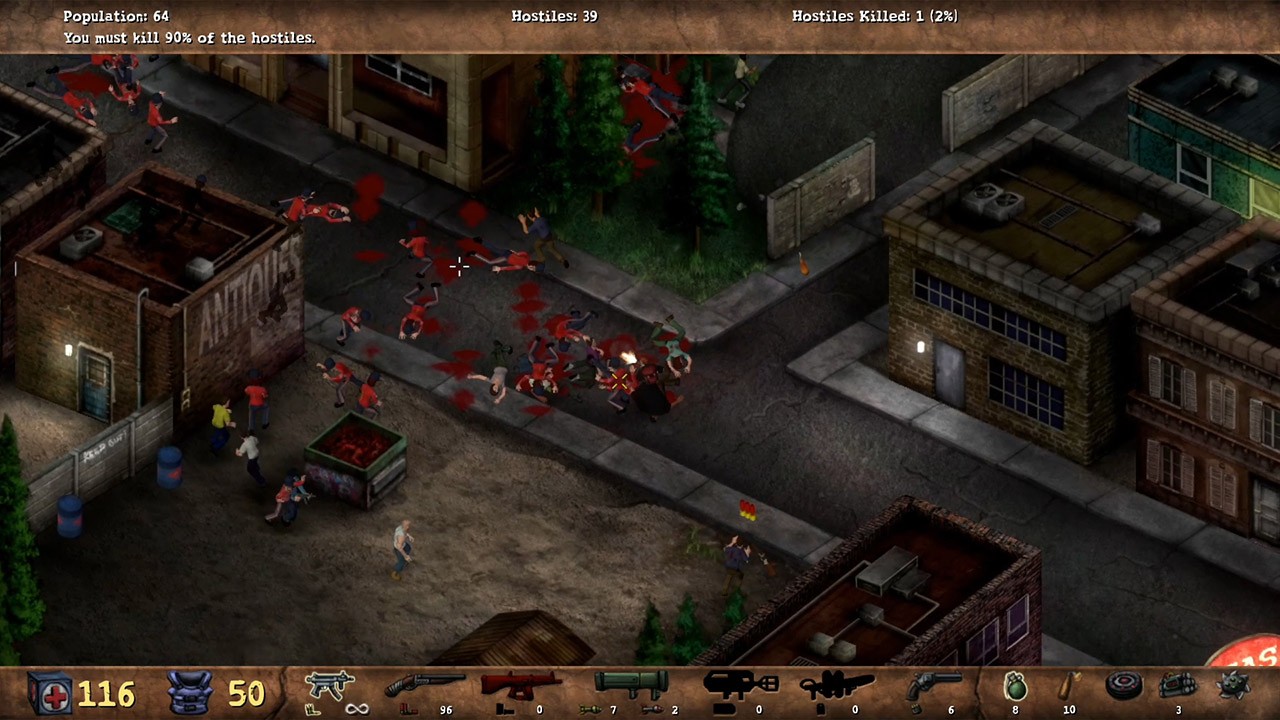 From the drop, Postal is an isometric twin stick that has multiple difficulty levels and two different gameplay scenarios. In one, a sort of endless arcade mode, your only purpose is to survive as long as possible. You aim with one stick, shoot with the other and pick up various weapons that are scattered throughout the stages, sometimes dropped by enemies but often just found lying about. In the arcade mode, most of what you see are “hostiles,” which is a catchall term given for people who actually shoot back at you. Granted, some of them are shooting preemptively, and almost anyone who is shooting at you has good reason, but I digress. You need to kill as many of them as possible in order to stay alive, sometimes grabbing health kits to restore yourself, but often just running around and being not a target. Successfully staying alive long enough can unlock additional stages for the arcade mode, making this more like a Crimsonland scenario than anything else.

The campaign mode of Postal Redux is where you’ll find the real game and also more choices. In order to progress to more stages, you need to successfully eliminate a percentage of hostiles before the exit will appear, but you’re welcome to try to 100% the stage (it’s helpful also with the searching and collecting of additional weapons and items). There’s a constant presence of innocents who are literally just trying to get away from you, and you have the choice to shoot them or not, it’s up to you. The shifting difficulty level affects both the number of hits that hostiles require to go down, how hard they hit you, and, from my perception, the chance of larger scale attackers to appear. In the first few stages, everything is mostly human, with local police combining with open carry citizens and the occasional redneck who is inexplicably packing dynamite. As time goes on, you run into more people with rocket launchers, and eventually finding legitimate soldiers and anti-attack turrets to take you down. If you’re interested in mayhem and being a dude who shoots things, stick to the easier difficulty levels. It’s as satisfying as you might think it would be given the subject matter, and it also removes a lot of the frustration that comes from being killed with seconds to go.

Postal Redux reminds me a lot of the experience of playing the first Grand Theft Auto. Though that game wasn’t much to look at (nor was GTA 2 or GTA London, for those who remember), it was the concept that helped engage people into the gameplay. Even today, it’s still more rare to be the bad guy in a game than the good guy, and most bad guy versions are given some kind of mystique, quirk or humorous trope in order to justify the player being someone who is inherently the antagonist. With Postal, nothing feels good or right about your quest. You’re beset by bookends between levels that are your inner musings that smack of self-righteous cruelty for what you’re doing. There’s a chance that you can incapacitate someone, but not kill them, and you need to “execute” them in order to move on, which is a designated button for capping someone in the head. Walking about, your character will constantly quip grim and macabre sayings like “Now that’s a boomstick” or “Lead-sucker” like he’s trying to be a Duke Nukem hero with none of the charm or personality. 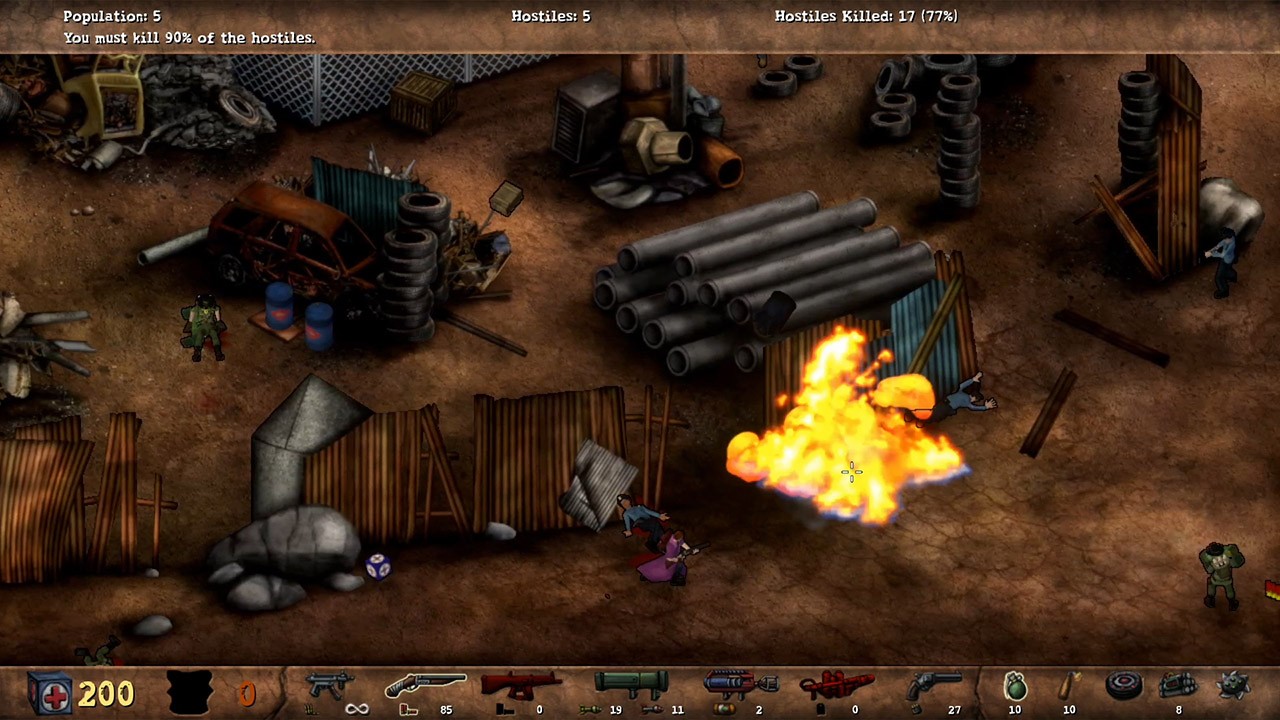 Having said that, the game is genuinely attractive and engaging to play. It has a good strategic element that asks you to use a decent variety of weapons, including some sub weapons like grenades to help clear out large swaths of enemies. Well timed dodging can cause friendly fire, as troops with missile launchers are just as likely to kill their own friends as they are you. More often than not, I could cause distance damage to prevent myself from ever being in real danger, with the harder difficulty levels asking you to be on your toes, ready to pivot and move constantly in order to survive. Postal Redux does a fantastic job of creating a palette of violence and darkness that you navigate through with determination more befitting someone with a good cause instead of “kill a bunch of people.” Yet it’s the slightly jovial tone and sometimes insane scenarios that keep this game from being just upsetting and awful. When I ran into a marching band at the start of one stage, I didn’t even hesitate: I threw a grenade and sent everything scattering. They weren’t hostile, not even a little, but that was my baser instinct in the game. It’s horrific, and yet incredibly fun. You have to balance outright carnage with actual tactical shooting in order to survive, which is something people always forget about with Grand Theft Auto: you can’t just be chaotic, you need to have a plan.

One last note: players will have to understand that, in spite of the updated graphics and expanded worlds, Postal Redux is still true to the core of the original game. So, besides the fact there isn’t a happy ending (how could there be?), the game is also not nearly as gory as it could be, nor is it as deeply detailed as modern shooters (even twin stick shooters) are. This is a title that was loved by the creators, spawned some truly excellent sequels (and a movie that’s deeply under appreciated), and even went freeware as of last year (the original version, but still). It’s an interesting title, and I’m glad to own it on the Switch, but I also understand it won’t appeal to everyone. If you enjoy the slightly more nihilistic side of gaming with enough dark humour to keep it from going too far, then you’ll enjoy Postal. And if you enjoy Postal, you’ll LOVE Postal 2. Just…don’t play Postal 3. Please.

Though darker and messier than I remember, Postal Redux nevertheless shines light on the original mayhem simulator and reminds us what gaming was in the 90s.