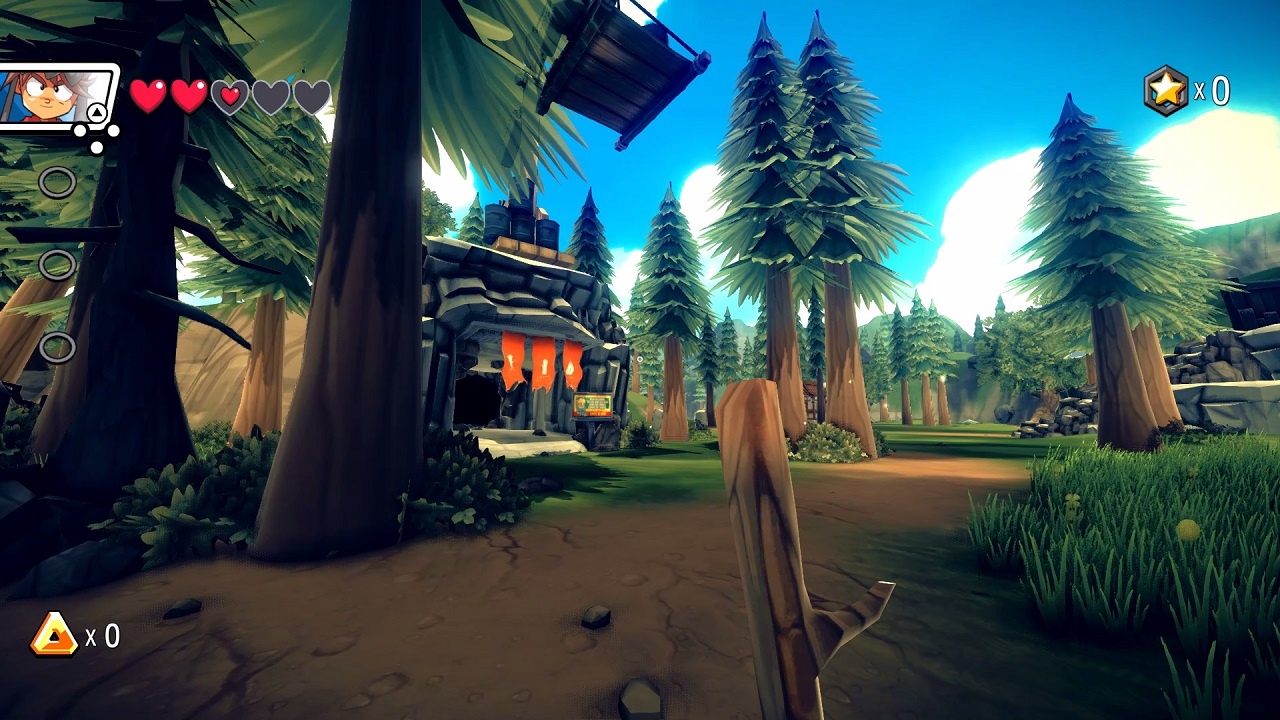 Away: Journey to the Unexpected is a rogue lite first person adventure set in a weird and wacky world. I started playing with an expectation built by the “FPS” tag, but I found that “adventure” better fits the game than shooter. The main draw of Away is the ability to recruit NPCs to your team and use their unique talents to aid your cause. You’re able to unlock zones that fall into a variety of biomes as you progress and each run earns you experience so that the game gets easier.

The first thing that drew me to Away: Journey to the Unexpected was its graphical style. The game features vibrant 2D character models that stand out amidst the 3D environments. You won’t find any of your typical RPG archetypes among hyperactive trees, bats with their intestines missing, or incompetent, half-mutated managers. The soundtrack is upbeat and suitable to the action happening on-screen, so no complaints there.

Away is presented in the first person perspective and controls like any shooter: move with the left stick, turn your view with the right stick and strike with the right trigger. Movement is smooth, but aiming is a little twitchy so you may need to play with the camera sensitivity. 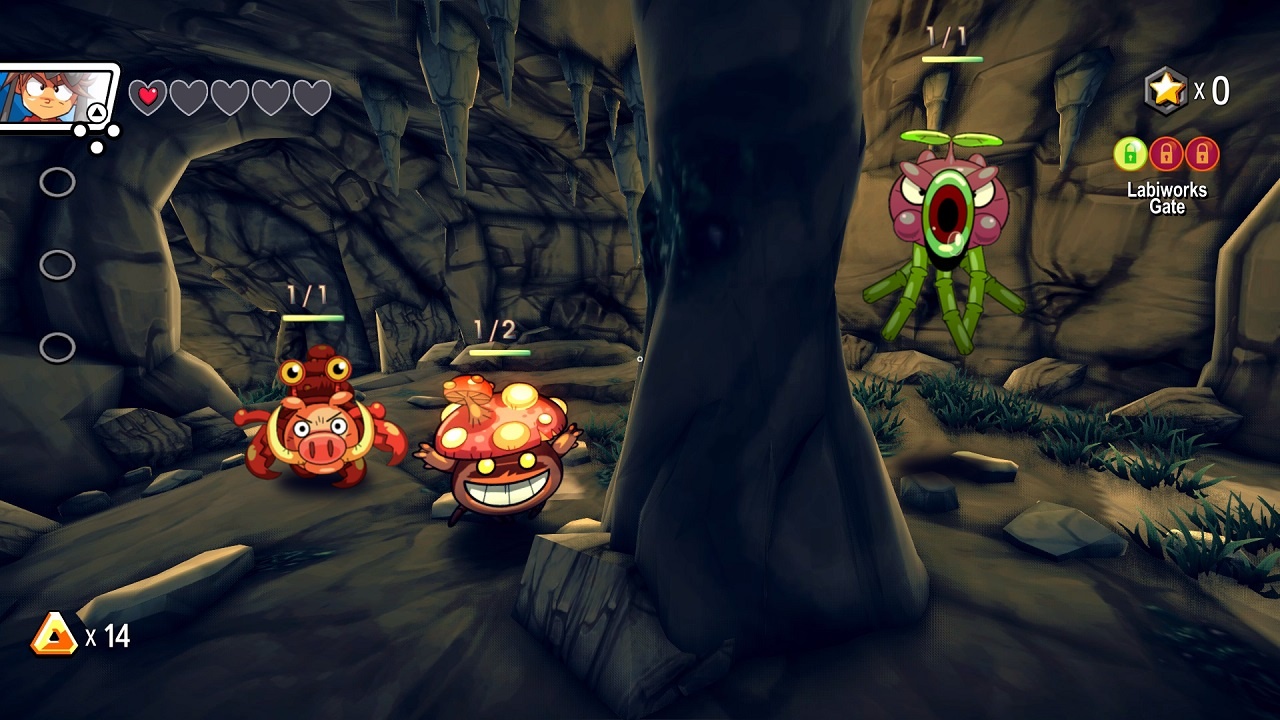 Away features a wide cast of NPCs and the recruiting process gives the hilarious narrative a chance to shine, making the characters its strongest asset.  The most interesting part of NPCs is the fact that all of them can be recruited to your team so long as you have an item called a Friendship Cube. Friendship Cubes can be found at random and can also be purchased from the in-game shop and they change the dialogue options when speaking to other characters. If you select the correct options, the character will accompany you and, if this is your first time recruiting that particular character, you’re awarded with a star, which is used to unlock new areas. Recruited characters are treated like power ups: they have limited energy and are often much more powerful or versatile than your main character.

Taking control of other characters is fun since it completely changes up combat, but newly playable characters add a weird colour wash to the screen that sometimes makes things hard to make out. Your teammates don’t have health bars, but energy bars which are expended by attacking as well as by receiving damage. Once an ally has drained all of his or her energy, you’ll need a new Friendship Cube to recruit a new one.

Like a Mario title, the game is broken into areas that are locked behind a progression wall. Star Levels, which are gained by recruiting allies and defeating bosses, are needed to access new areas. In order to unlock access to the boss, you must spelunk through three caves and activate three switches. Caves are procedurally generated, but they’re also small in size, leading to repetitive layouts and diminishing replay value. Bosses are challenging and fun, but the enemy swarms beforehand leave something to be desired after you’ve seen the same handful again and again. 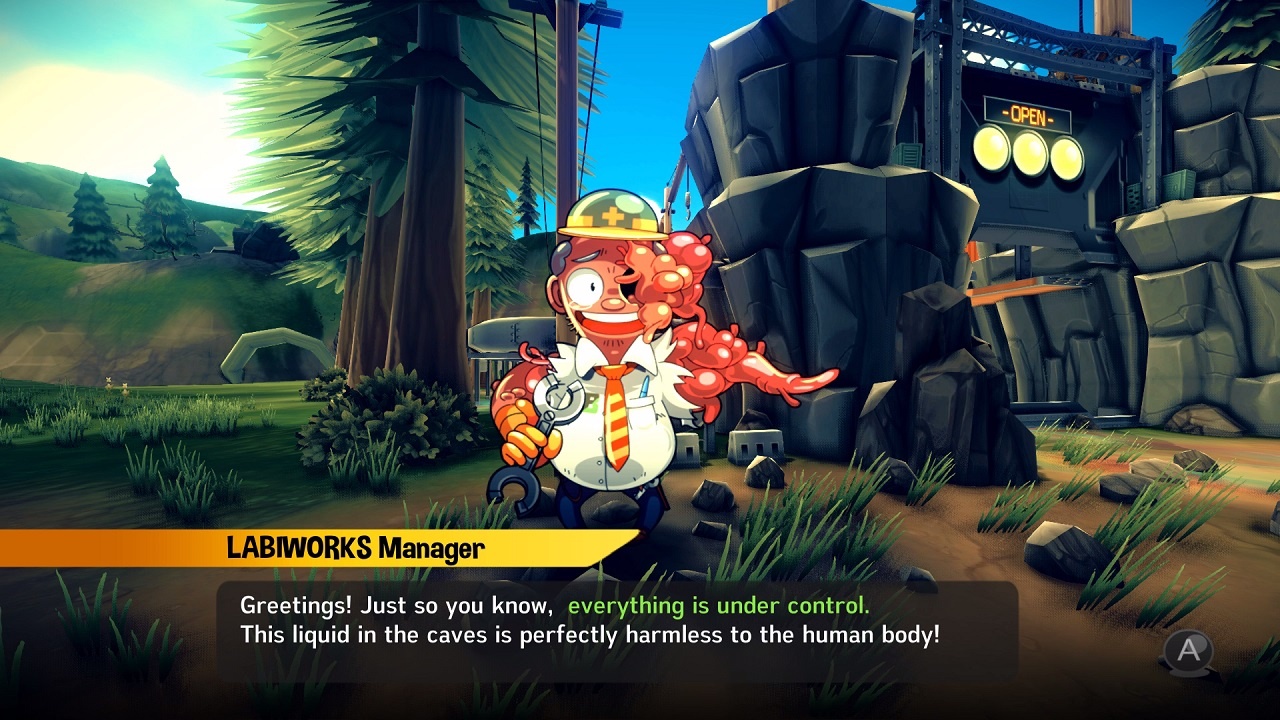 Every time you fall in combat, you’re tasked with fighting your way through the same set of areas you’ve already faced. Once you’ve gotten things down to a science, moving through areas is a breeze–but until then, it can be a tedious grind. The game does a good job of awarding you experience and improving your character based on what you accomplish during a run, making subsequent runs easier. Your coins carry over across playthroughs and can be used to buy items in the shop and to recruit powerful characters, so it’s in your best interest to collect as many as you can.

Unfortunately, there are several quality of life improvements from which the game could greatly benefit. The first and most bafflingly absent is the ability to suspend a playthrough. If you want to play something else while in the middle of a playthrough, you can’t without forfeiting the NPCs you’ve recruited and the story progress you’ve made. This is pretty frustrating and I hate to be forced to play on when I want to take a break from a particular title. Aiming could also use some work. When using your standard melee weapon, there’s a learning curve as to where you need to aim in order to hit the enemy while also avoiding taking damage. Finally, it would have been nice to be able to quit dungeons after clearing them rather than have to walk back to the entrance. This is a minor complaint just as long as you aren’t low on health and the area isn’t fraught with deadly glowing liquid.

Away: Journey to the Unexpected isn’t perfect by any means, but it’s got heart. If you’re looking for an adventure game you can play in short bursts and still feel like you’re making some progress, then you’re in the right place. The price tag is fair for what you’re getting, though some quality of life improvements regarding combat and the ability to suspend a playthrough would be welcome.

Away: Journey to the Unexpected Review

A rogue lite first person adventure game that’s cheery and whimsical on the outside, but challenging through and through.